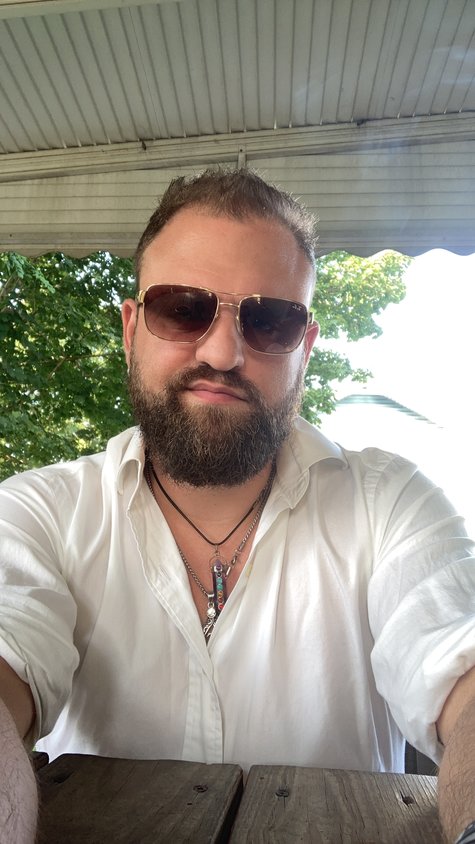 Micah Dank, a Rockville Centre native and member of South Side High School's Class of 2001, has authored a seven-book fictions series based in Astrotheology.
Courtesy Micah Dank 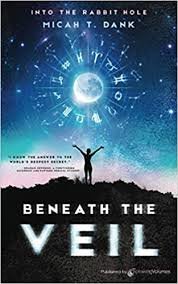 The first entry in Dank's seven-part Into the Rabbit Hole series.
Courtesy Micah Dank
Previous Next
By Tom Carrozza tcarrozza@liherald.com

Author Micah Dank said he thought that he might one day be well known in media, but he never expected he would be seven books into a series on astrotheology. After growing up in Rockville Centre, devoting himself to the stage, Dank found meaning in the zodiac and connections he saw in the Bible, and decided to write about them.

Dank, 38, who lives in Baldwin, has been rapidly producing new entries as part of his series “Into the Rabbit Hole” over the past two years. Finally, after finishing his seventh entry, “The Unbegun”, which is to be released in March, and appearing on more than 200 podcasts to talk about his interest in astrotheology, which is the worship of the stars, individually or together as the night sky, the planets and other heavenly bodies, Dank has had a chance to reflect on how he got to this point.

He graduated from South Side High School in 2001 and went on to initially study acting at the American Academy of Dramatic Arts in Manhattan.

“I was an acting major, but I realized when I got there that the acting classes I was taking were nowhere near as good as the ones I had already taken,” Dank said. “So I switched my major to English, thinking it would help me read scripts better. I wouldn’t be as big of a reader and I wouldn’t have such a breadth of topics that I talk about in my book series if that didn’t happen.”

Dank was born in South Nassau Hospital, now called Mount Sinai South Nassau. His family moved to an apartment complex on Maple Avenue in Rockville Centre before his 1stt birthday. Dank trained to be an actor, and his parents worked hard to afford to put him through the academy, at which he studied for three years while also attending South Side High School.

The academy, which draws in young actors from across the world, had a very intensive curriculum. Dank enrolled in a summer program at the school, where he learned and performed for five days a week and seven hours a day. Dank attended college at SUNY Albany, but transferred to Hunter College after his parents separated, where he earned an English degree in 2006.

Dank credited his 12th grade English Russell Reed at South Side with pushing him onto the path of being a writer and eventual published author.

“A lot of people hate reading growing up until you’re old enough to realize you can read what interests you,” Dank said.

While attending SUNY Albany, Dank made a decision that would solidify him eventually becoming an author. A job hunt followed, which Dank described as difficult since he was not taken by anything straight away. He was accepted into Long Island University’s masters’ program for English education, but just before he was going to enroll, the market crash of 2008 occurred. Instead of taking out loans during that financially perilous time, he got a job at World Courier, a medical logistics company.

In 2012, Dank left his job at World Courier to move to Boston. He fell down his first “rabbit hole “while there, as he occupied his time navigating videos on astrotheology on YouTube.

“I came across one video with a guy who was applying the zodiac to events from the Bible that made a lot of sense to me,” Dank recalled. “It was my ‘aha moment. I grew up in a very religious household and never took to it, but I got into this and’ it answered all my questions.”

That’s when Dank decided he would write a book about his new interest.

As a fan of George Orwell during his college years, Dank was inspired to write in fiction. “I realized that if you want to reach a lot of people, you don’t write a non-fiction book because that pigeonholes your audience,” Dank explained. “You write fiction books and you tell the truth in it.”

Dank wrote his first book, titled “Decoding the Phoenix,” in 2017. He self-published after failing to find a literary agent and the book “didn’t really do well at all,” he said. Though he was disappointed, one of his friends contacted him and encouraged h him to continue the series. After he wrote a second book a year later, it landed him an agent, which got him a shot at pitching to publishing houses.

Dank could not find a publishing house that would pick up the series midway through, so the author got the idea to rebrand the story, change his pen name and scrub his old series off of the internet. It worked, and publishing house Speaking Volumes awarded him a three-book-deal.

Rejuvenated from the success, Dank wrote the third in the trilogy and in a “blitz of creativity,” he produced another three that also got picked up by Speaking Volumes. The first book, “Beneath the Veil,” took him two years to write before it became available on

Amazon in June 2020. His writing has gone into hyper speed, as the soon-to-be released seventh entry was written in 19 days.

Dank follows in the school of Dan Brown’s “The Da Vinci Code,” though on a shorter, more episodic adventure. The main character of “Into the Rabbit Hole,” Harvard medical student Graham, bears some influence from the protagonist of Brown’s famous series, though Dank said he likes his characters to be young and sarcasticHe added that he enjoys including cryptograms and anagrams in his series, as well.

What was a one-off book that became a trilogy and now has a seventh book soon to released, and it may soon have an eighth entry. Dank has also expressed interest in penning a children’s book based in astrotheology. He is highly motivated, having received between 250 to 300 rejection letters in his time as an author. Dank said he kept them all.

“It would have been easy for me to give up, but I knew what I had was special,” Dank said as advice to aspiring authors. “So, believe what you have is special.”