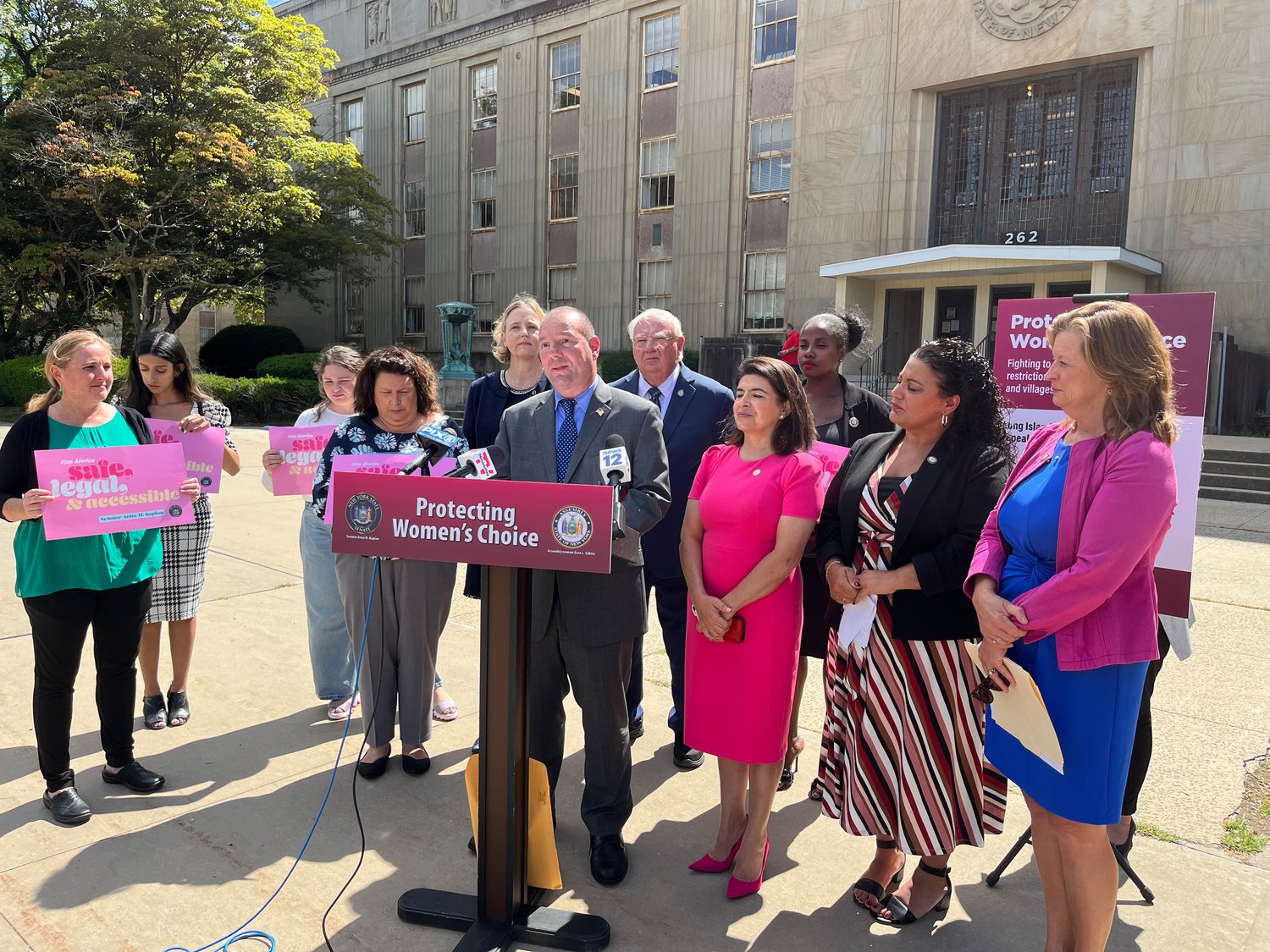 Some are urging lawmakers to repeal restrictive abortion statutes found in five Long Island municipalities. They suggest that the laws set a precedent for future restrictions of abortion access. Those who violate the laws could face jail time and fines.
Will Sheeline/Herald
By Roksana Amid

The laws — written before the famous 1973 decision that rendered them moot — have turned up in the towns of Hempstead, Oyster Bay and Huntington, as well as the villages of Freeport and Williston Park. The laws restrict abortion access of any kind — including medication-based, non-surgical procedures — and require abortions to occur only in a hospital setting.

Those found violating these laws could have been subject to jail time and fines. While state law is in place protecting procedures to end pregnancies, some local officials say these old restrictions would have effectively outlawed abortion clinics like those run by Planned Parenthood while adding barriers to women accessing specific kinds of health care.

At a news conference in front of the Nassau County Courthouse last week, local officials joined pro-abortion activists to condemn these laws. State Sen. Anna Kaplan and Assemblywoman Gina Sillitti were joined by Sen. John Brooks, Assemblywomen Judy Griffin and Taylor Darling, as well as some council members from the Town of North Hempstead.

“I was disgusted to know that these abortion restrictions were still on the books,” said Deanna Drury, who lives in Oyster Bay. “Laws cannot exist criminalizing reproductive health care.”

Drury, a mother to two young boys, says she refuses to raise her children where access to reproductive health care is restricted.

“Now with abortion rights under attack, we need to keep New York a safe place for reproductive care and get rid of these draconian laws.”

Ashna Mehra, a resident physician from North Hempstead, stressed that reproductive health care is a major aspect of health care.

Mehra believes access to abortion is crucial to the overall well-being of a woman’s health.

“The reassurance of access cultivates a relationship of honesty between health care professionals and the public,” she added.

Abortion restrictions in the Town of North Hempstead were adopted in late 1971, a year after the state senate legalized abortion up to the 24th week of pregnancy, and two years before the U.S. Supreme Court’s ruling on Roe v. Wade.

Stilliti did reassure the crowd, however, the state legislature has ensured a woman’s right to choose was protected, and encouraged local municipalities to pass similar rules.

“There are those running for office right now trying to repeal these efforts,” Stilliti said. “As a proud pro-choice elected official, we have to make sure every loophole is closed, and closed tight.”

Kaplan expressed her concerns over what she described as the U.S. Supreme Court’s reckless decision to hinder constitutional rights. She believes it’s the responsibility of legislators like her to fight for rights at every level of government, stressing that there are people who will use political discourse to restrict the rights of women.

“It’s shocking that over a million people on Long Island currently live in a community where there are still abortion restrictions on the books,” Kaplan said. “We know that these laws were enacted with the sole purpose of getting between women and their right to choose.”

The state senator also believes officials in affected communities should follow the lead of the Town of North Hempstead.

“We should stand up for women by repealing these unjust barriers to abortion care,” Kaplan said, “and finally send these draconian restrictions to the dustbin of history where they belong.”

Yet, there are many who believe overturning Roe was the right decision. Some, like anti-abortion advocate Marie Coyle of Glen Cove believed abortion simply dismissed the potential and value for human life.

“I think we’re tampering in areas that we should not,” Coyle said. “You can control your body before, but once you have a child within you, you can’t control that, it’s left to God.”

Coyle believes children not wanted by their mothers should be placed in adoptive care so their potential for life isn’t squandered.

There are also others who, believe it or not, don’t have a strong opinion one way or the other on the controversial topic.

The Rev. Roger Williams of First Baptist Church of Glen Cove believes in the sanctity of life, but is politically pro-abortion. Williams is not in favor of the atmosphere surrounding Roe, however, believing the movement too politically motivated.

“I don’t want to sound like I’m making a judgment against individuals who are pro-life and anti-abortion, but I don’t see that movement being completely concerned with life all together,” he said.

Williams believes for and against abortion have been very harsh to women, and refuse to provide an adequate support system for mothers and children after birth.

Six-year-old oyster gardening program seeks to save the Sound