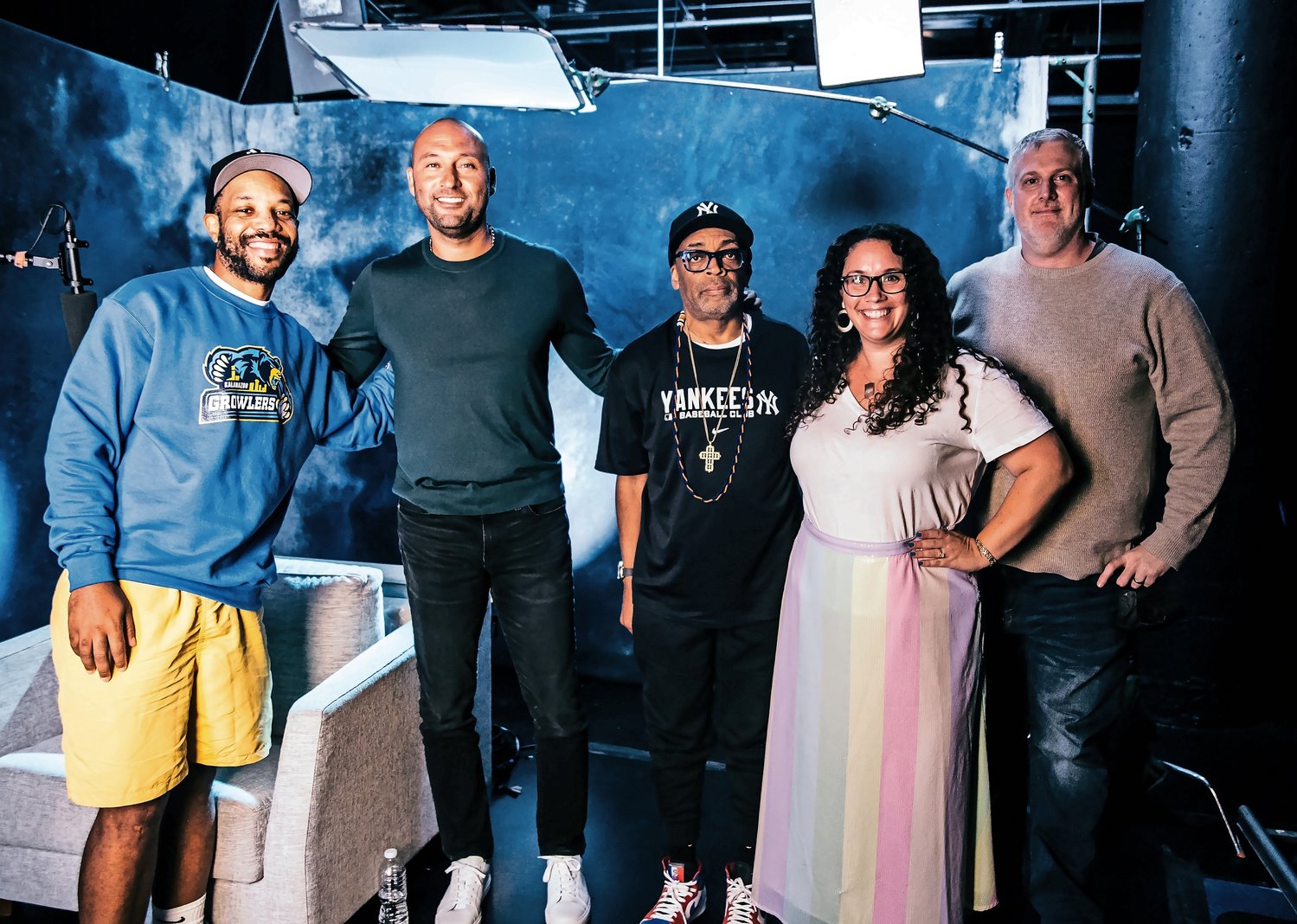 From Left: Director Randy Wilkins, Derek Jeter, Spike Lee, Alex Cirillo and Gabe Honig on the set of 'The Captain.'
Anthony B. Geathers/Courtesy of 42West
By Daniel Offner

Baseball fans are buzzing about the new seven-part ESPN docuseries, “The Captain,” which began airing on July 18, because of its compelling new narrative about the legendary New York Yankees shortstop and heart of the championship-winning franchise—Derek Jeter.

However, you might not have been aware that two of the producers behind this compelling new series grew up in Rockville Centre.

Alex Cirillo, one of the two top-billed producers behind “The Captain,” began to pursue a career in film as a student in the International Baccalaureate program at South Side High School. 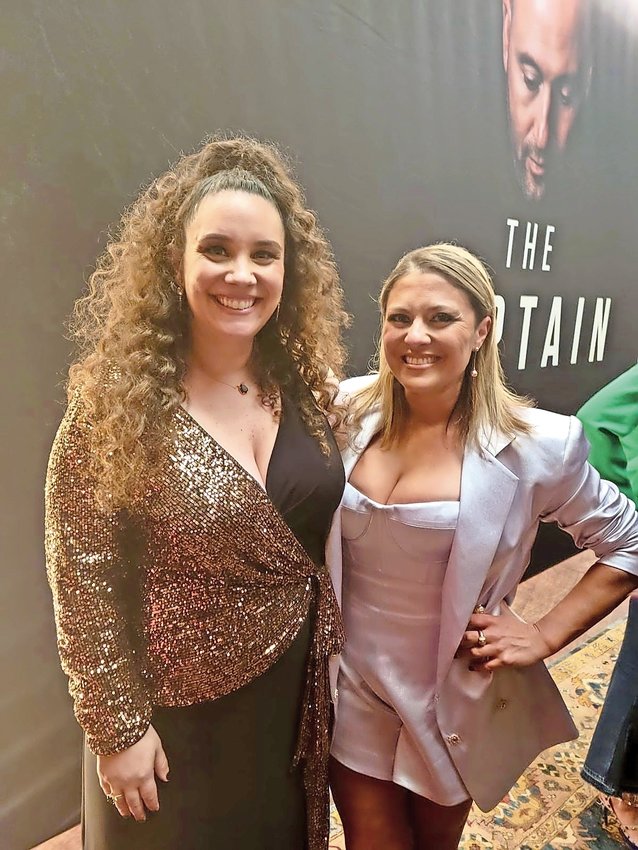 Alex Cirillo (left) and Jenna Carey at the Tribeca premiere of 'The Captain'
“I knew before I went to college what I wanted to do,” Cirillo said. “I knew that I wanted to work in film and television.”

Cirillo started her career at Washington Square Films, after which she decided to launch her own company—Big Vision, Empty Wallet—which helps support independent filmmakers financially so that they can bring their visions to life on the silver screen.

It was through this endeavor that she met director, Randy Wilkins. Together they ended up producing a short film about Jackie Robinson for Major League Baseball, after which he was approached by Spike Lee to direct the series on Jeter.

“Baseball and New York sports, in particular, were a big part of our family,” Cirillo said. “My husband is a tremendous Yankees fan. We went to South Side together and we both played sports there.”

Cirillo said that while “The Captain” is by far the biggest thing she’s worked on to date, she appreciates her journey in independent film for helping teach her how to hustle and build with only a small budget and a passionate team.

As for working with New York sports legends like Derek Jeter and Eli Manning, Cirillo said it was an extremely rewarding experience that she won’t soon forget.

“It was eye-opening to work with someone who is such an accomplished champion,” Cirillo said. “He was inspiring to be around and there was a lot I learned from him. He is a very calculated person, who thinks about everything he does before he does it.”

In addition to her work with the ESPN docuseries, Cirillo has previously worked on projects including SXSW Audience Award-Winner “The Light of the Moon,” “One Cambodian Family Please For My Pleasure,” starring Emily Mortimer, the ABC news series “Big Vision Creatives” featuring Joe Manganiello and Adrian Grenier, which she directed and produced, and “Lez Bomb” starring Bruce Dern, Cloris Leachman, and Steve Guttenberg, which she executive produced with Bobby Farrelly.

Line producer Jenna Carey also grew up in Rockville Centre and began studying film at South Side High School. Carey and Cirillo first met in homeroom back in the 6th grade and was a friend of her sister’s.

They first worked together in 2009, when Cirillo brought her in as an intern at Washington Square Films. After getting a summer job working as a production assistant, she continued to grow in the industry.

After graduating from college, Carey worked for a brief period in marketing and sales but didn’t find it quite as fulfilling. It was then that she decided to move to Los Angeles where she worked as a production manager on “My Boyfriend’s Meds,” starring Jason Alexander. She also produced several national commercials and was the associate producer for the actress Arielle Kebbel on projects for HBO, ABC, NBC, and Lifetime.

When the pandemic hit in 2020, Carey returned to New York and got in touch with Cirillo, who had already started to work with Wilkins. After being introduced via a phone interview, Wilkins felt she was a great fit for the project and brought her on board as well.

“Baseball for me was never a large hobby. I just enjoyed socializing,” Carey said. “But I did a lot of reading and research on Derek. I wondered how someone so nice and drama-free could be so good at their craft that he ends up on his dream team. He’s the ultimate manifester.”

Carey said she would look for something to prove this wrong, but came up empty every time.

“Every time he was more gracious than the next,” Carey said about Jeter. “He showed up early every day. He was down-to-earth, witty, and charming. Everyone we interviewed, whoever came in contact with him, couldn’t have nicer things to say about him.”

She said that they interviewed nearly 100 people for the program. But the fact that everyone was so willing to give their time and energy to talk about their experience, really spoke volumes about who he is as not just a ballplayer, but as a person.

Outside of her work as a producer, Carey has been working on her comedy routine in the hopes of doing stand-up sometime in the future. She also said she looks forward to expanding on her production experience with documentaries.

“My dream would be to write, produce, and direct my own sitcom,” Carey said. “I am super fortunate to work with the director. Randy is someone who not only had a vision, but a vision that he was willing to share.”

She said that she also learned a lot from working with Cirillo. “These opportunities changed my life,” she added. “It’s important to work with people who want to share their vision with you.”

The seven-episode ESPN docuseries, “The Captain,” was filmed entirely during the Covid-19 pandemic, which presented the team with new challenges as they were forced to adapt during this global health crisis.

The first six episodes are currently available online via ESPN and Hulu streaming services. The final episode of the docuseries will premiere on ESPN on Thursday, Aug. 11 at 10 p.m.