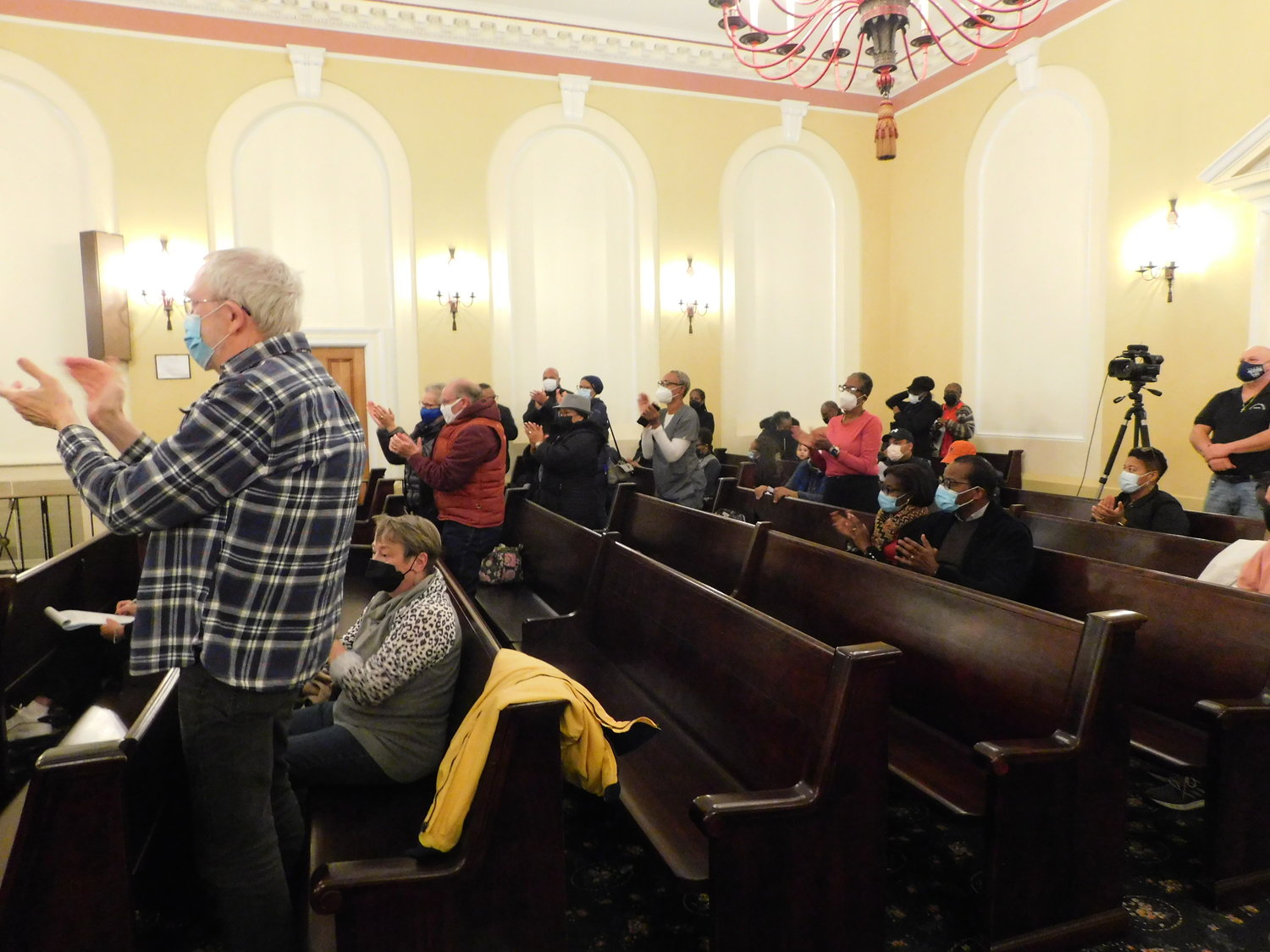 Members of the Stearns Park Civic Association stood to applaud the Village of Freeport government at a public hearing Monday after a code amendment was approved that would help protect their neighborhood from overbuilding.
Reine Bethany/Herald 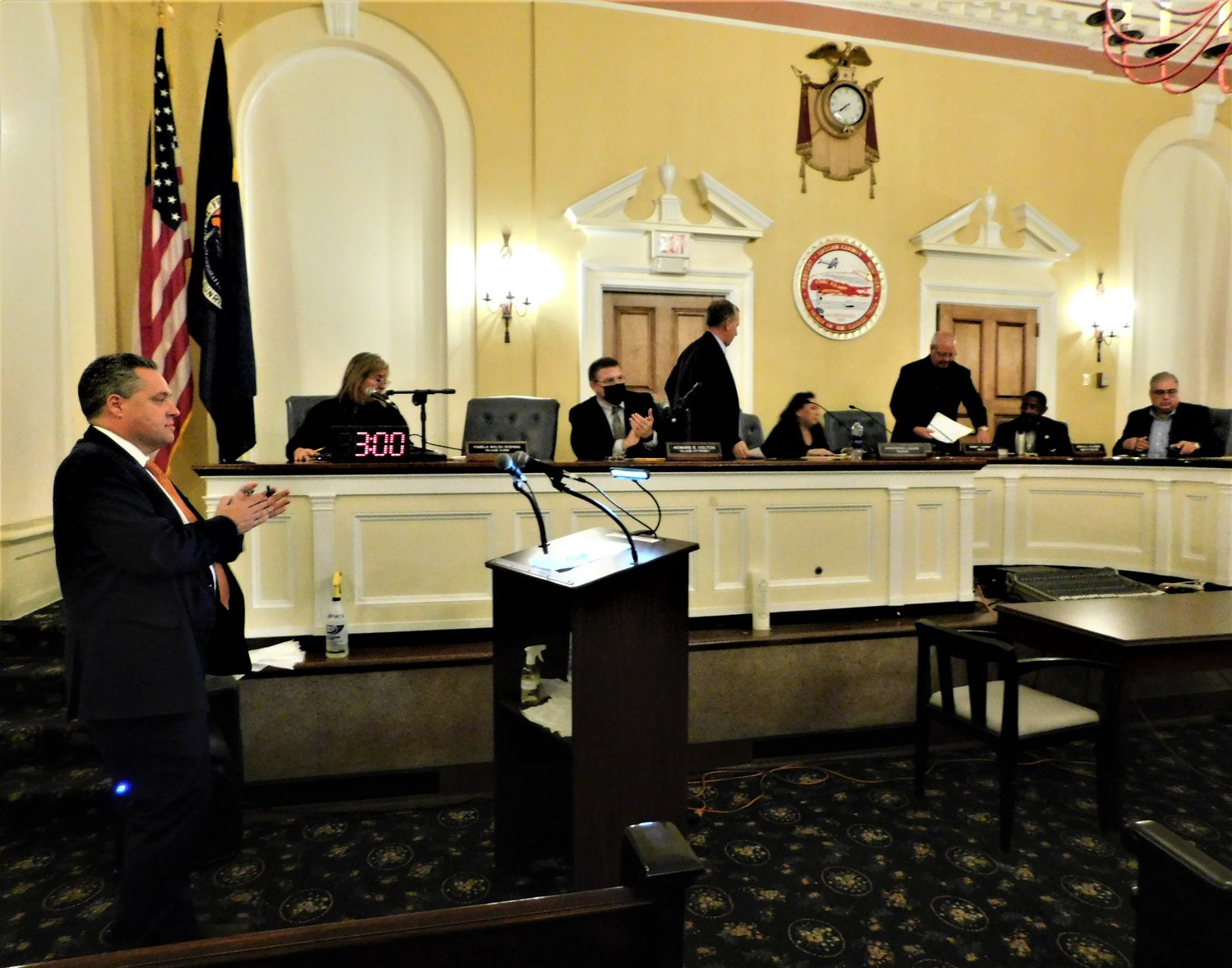 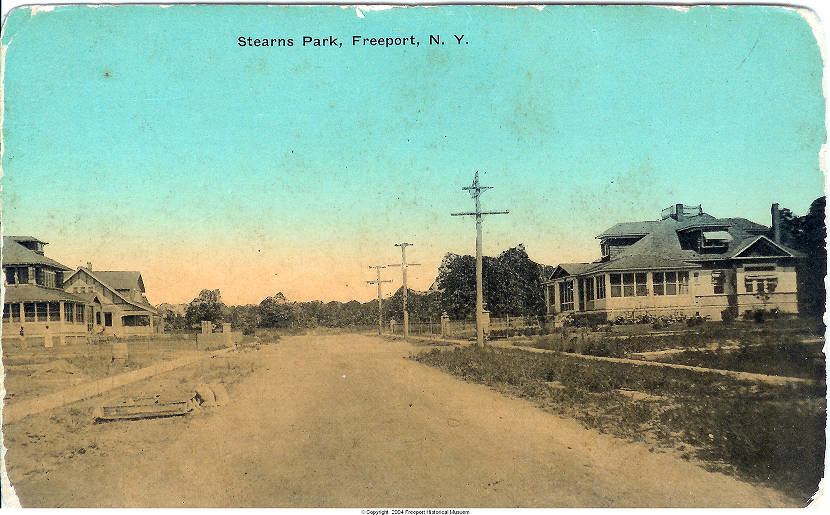 Businessman Hugo Stearns immigrated to the United States from Germany in 1888. He controlled the ostrich feather market. Around 1905, he purchased a large tract of farmland in northwest Freeport along Pennsylvania Avenue and designed his idea of an exclusive residential park: wide streets landscaped with trees and shrubbery, long driveways for upscale homes, a 9-hole golf course. By the time he died in 1942, his dream had been realized, and many well-known personalities in business and the arts had located their homes in Stearns Park. Though the golf course only lasted into the 1950s, and the original stone entrance gate has long disappeared, the gracious character of the area has been preserved by its residents.

Chapter 210 Zoning, Article IV, Residence AA Districts, governs the minimum requirements for building in that district. The amended version reads: “No building shall be erected on a lot whose area is less than 10,000 square feet and on any lot which has a street frontage of less than 100 feet and on any lot whose width is less than 100 feet at any point between the side lines from the front property line up to the rear building line of the proposed structure.”

Members of the Stearns Park Civic Association stood to applaud the Village of Freeport government at a public hearing Monday after a code amendment was approved that would help protect their neighborhood from overbuilding.

The public hearing followed the regular meeting of the board of trustees, which included the swearing-in of Stephen L. Drummond as associate village justice.

The purpose of the public hearing, according to the agenda sheet, was to consider the amendment.

Deputy Village Attorney Robert McLaughlin explained that the code amendment referred to AA zones (Chapter 210 Zoning, Article IV, Residence AA Districts), which are areas reserved for larger residential plots. The amendment changed two aspects of the code: first, the size of the plot required for a new building to be constructed, and second, the process required to seek a variance from the Zoning Board to allow subdivision.

The amendment increased the plot size required for new construction from 7,500 to 10,000 square feet, and the length of the property’s street front from 75 to 100 linear feet.

The amendment does not affect any prior construction.

Under the amended code, an application to the Zoning Board to subdivide a property requires that every resident within 200 linear feet be notified, so they have a chance to voice concerns at the relevant Zoning Board meeting. Also, the applicant must explain the reasons for subdividing.

Under the old code, no zoning variance was needed to subdivide unless the plot was smaller than 7,500 square feet. Residents didn’t receive notification of any change until the matter had gone from the Zoning Board to the Planning Board.

The amendment was motivated by action from the Stearns Park Civic Association, whose members want to deter the subdivision of housing plots in their neighborhood, and to preserve the spaciousness that has historically characterized it (see Box 1, “Historic Stearns Park”).

When the amendment was approved, more 40 Stearns Park Civic Association members rose from their seats in prolonged applause.

Trustee Chris Squeri recalled a subdivision issue on Mount Joy Avenue about two years ago that had prompted an 18-month moratorium on subdivisions. “This allowed us to review the situation and consider code revision,” he said. “This change should eliminate that issue. Stearns Park is a little gem up there. You guys do so much to keep that community in the right way.”

Linda Silver Thompson, the association president, thanked Mayor Robert Kennedy and the trustees for acting on the members’ concerns. “You contribute to preserving the character of our Sterns Park neighborhood,“ she said.

Kennedy thanked the trustees, residents and McLaughlin, who had designed the code amendment. Deputy Mayor Ronald Ellerbe commended the civic association members for their participation in village life, saying, “I urge all neighbors and friends to participate.”

In an interview, Stearns Park resident Maxine P. Babb said, “The association is vigilant to keep the integrity and feel of the neighborhood — its aesthetics.”

Babb, who is Black, bought a house in Stearns Park in 1988. She and her husband and two sons stayed because they experienced the area as “eclectic and accepting,” and living there was “never a color thing.” In fact, she said, “When I moved in, the neighborhood high school kids baked me a cake.”

The acceptance and neighborliness have not changed in 33 years.

“I liked the fact that, when Blacks moved into the Stearns Park, whites did not move out,” she said. “It was always racially mixed. A very large number of the residents are educators, school superintendents, people in higher education, lawyers, doctors, dentists, business owners, people with professional degrees who are strongly civic-minded, always involved with the schools, chipping in with the kids.”