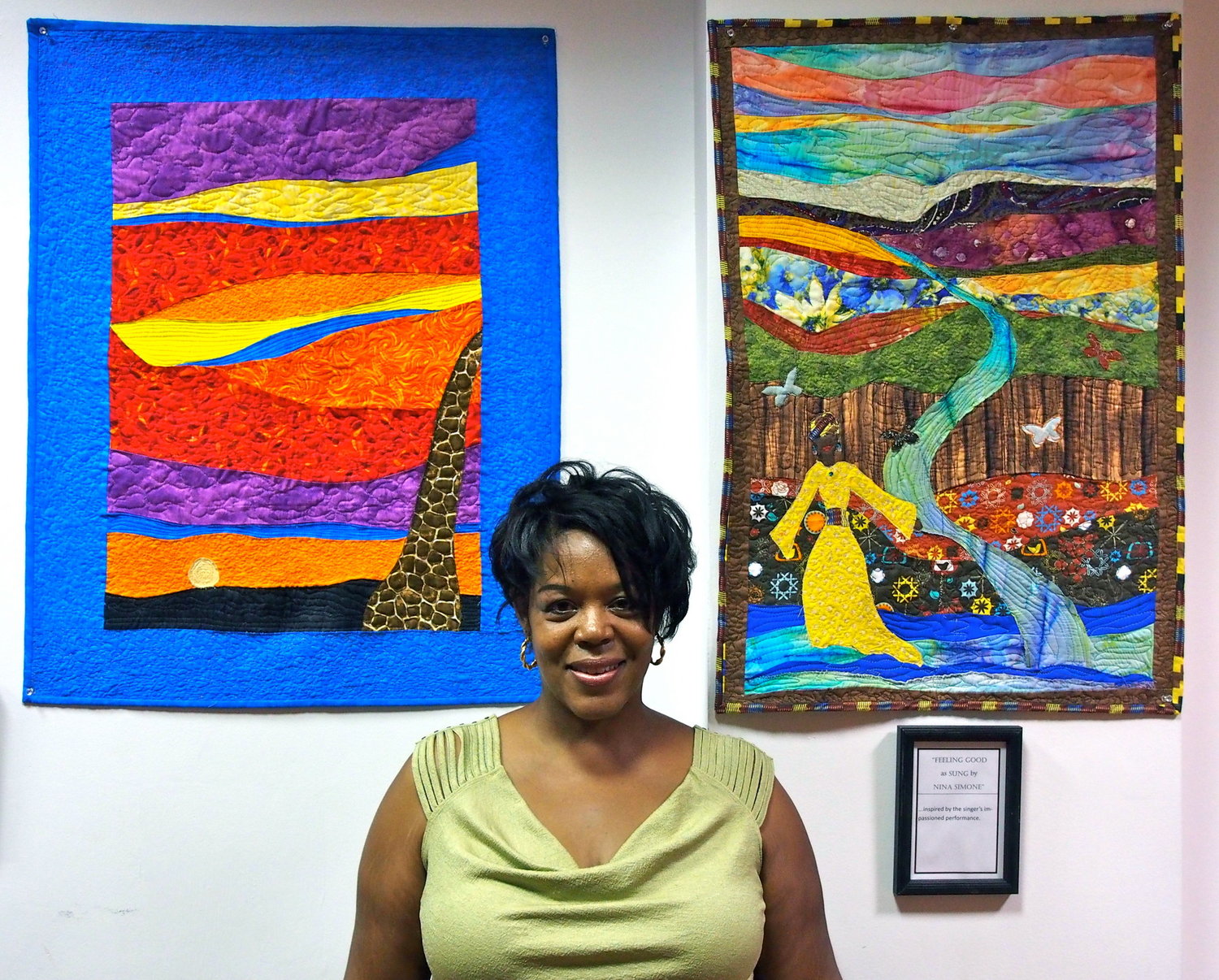 Kim Taylor and an example of past work displayed at the African American History Museum in Hempstead in 2013.
Herald File Photo

Continue to be involved, continue to hold the idea of anti-racism in your hearts and take action.”
Kim Taylor, artist
By Karina Kovac

On Dec. 4 the last anti-racism quilt class was held by the Baldwin Public Library with artist Kim Taylor. The three-part series allowed community members of different ages to participate in creating three different quilts that will be completed by Taylor by Dec. 31 and hung up in the library.

Starting a collaboration with the library for a Juneteenth workshop, Taylor was asked to come back and quilt after it became a successful educational program. In this final quilting class for teens, the message Taylor wanted to convey was how powerful young voices are in revolutionary movements in the past and today. In addition, she wanted to explain the difference between non-racists and anti-racists.

“A non-racist is definitely against racism and understands when they’re seeing racist acts, …but generally they don’t take action against it,” proclaimed Taylor, while “an anti-racist actually does something, and takes action…it’s a way of life rather than just a feeling.”

“Being a person that’s older, I’ve seen so much--I saw my parents actively involved,” said Taylor on whether she’s experienced racism firsthand. Throughout her life, 58-year-old Taylor said she’d realized how important teens are in the fight for equality, “In the 60’s in the marches, teens held a huge part and recently in the BLM [Black Lives Matter] marches.”

Baldwin sisters Faith Omodara, 14, and Favor Omodara, 11, attended the quilting session in hopes of using their creativity, having fun and learning. Faith, who goes to the Baldwin High School, said she enjoyed how she could “make something [of] my own.” She has been painting for two years by “look[ing] at a lot of different art pieces and try[ing] to replicate them.”

She continued to say that hobbies can help “you have a goal for yourself and [is] something to have fun with.” Favor, her sister, has used sewing as her creative outlet and has been sewing for a year, saying the event “seemed really fun” and that she wanted to “try new things.”

During the program Taylor also read a book on Claudette Colvin, a 15-year old who was arrested in Montgomery, Alabama, for refusing to give up her seat to a white woman on a segregated bus nine months before Rosa Parks.

Speaking on racism in Baldwin, Taylor said she feels that “Baldwin is a great place to live, but…every place has steps that they need to take…people need to actually do something not just speak out against it.” She urged the public to “continue to be involved, continue to hold the idea of anti-racism in your hearts and take action.”

In 2014 Taylor served as the Baldwin Civic Association’s Membership chairperson and two years as vice-president. She started the Baldwin Civic Youth Council and was the first African American elected to the school board in Baldwin.

Right now, she is on the board of the Baldwin Foundation of Education and uses her platform to help advocate for Baldwin students. “A Flag for Juneteenth,” her upcoming book is scheduled to be released in January 2023.

The anti-racism quilting program was made possible with funds from the Decentralization Program, a regrant program of the New York State Council on the Arts and the New York State Legislature, and was administered by The Huntington Arts Council, Inc.