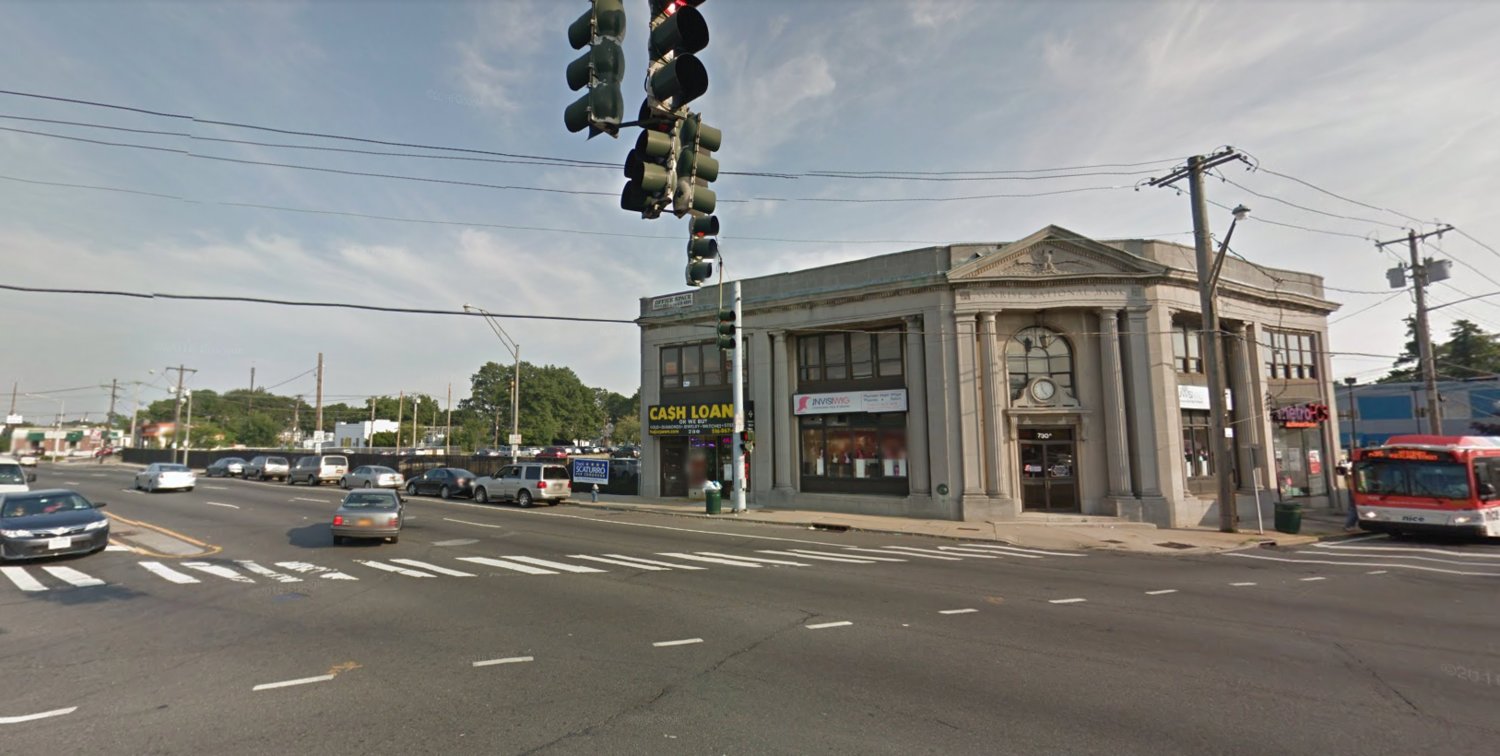 The auto storage lot on the corner of Sunrise Highway and Grand Avenue has been crowded with dozens of vehicles for 10 years.
Courtesy Google Maps

It’s so beyond disrespectful to the community that you verbally stated how bad this company is and how they haven’t followed the rules, and yet . . .”
Linda Degen, resident
By Bridget Downes

A number of Baldwin residents are upset after the Town of Hempstead Zoning Board of Appeals granted a continuance of a variance that allows the owner of an auto storage lot near the Baldwin Long Island Rail Road station to continue storing vehicles there. The decision came despite a state-assisted downtown redevelopment process that is now under way.

The ZBA made its decision on Dec. 26, about three weeks after a dozen residents shared their concerns with trustees at a hearing at Town Hall, seeking to have the variance revoked. The group said the lot is an eyesore that depresses the property values of neighboring homes and businesses and hinders the hamlet’s efforts to revitalize the area.

“It’s disgraceful and outrageous that they did this,” said Baldwin resident Linda Degen, adding that the business has “years’ worth of not adhering to the rules and the laws.”

The lot, at the corner of Sunrise Highway and Grand Avenue, once the home of Conway Motors, has been used to store autos for the past 10 years, and is owned by JS Sunrise Realty. Baldwin Civic Association members said it is poorly maintained, and that the site should be used more productively. It falls within the boundary area of the Downtown Revitalization Initiative, which Baldwin received a $10 million state grant over the summer to redevelop.

According to the decision, the property owner was granted a special exception to store vehicles on the lot with conditions, including repairing or replacing the fence and the uneven sidewalk within 30 to 60 days of the paperwork being submitted to the town clerk. Hempstead officials said the decision is expected to be submitted to the clerk within two to four weeks.

“The community has been putting up with this and presented a very good case with facts, with pictures,” Degen said, “so I want an explanation from them how that could possibly happen and why they awarded this very bad behavior.”

Two years ago, JS Sunrise Realty was granted a variance with conditions to continue using the site to store vehicles, despite objections by residents and civic group members. Dominick Minerva, an attorney representing the property owner, said in the past that the owner planned to build an auto dealership.

The conditions included paving the lot and installing lighting and drainage and hiring a service to maintain the property. And only two of the conditions were minimally met, despite the town issuing three citations for violations of the Building Zone Ordinance.

Residents said they were frustrated and confused upon hearing the decision, especially because, at the December hearing, zoning board Chairman David Weiss had sided with residents and condemned the property owner.

“How many tens of thousands of people drive by there on a given week, or whatever, and it looks like hell,” Weiss said at the time, adding that the lot sits in a central place in Baldwin. “It’s got to be cleaned up.

“We’ve got stacks this thick of complaints and things about what your client hasn’t done,” Weiss told Minerva.

Residents also shared stories of tripping on the raised concrete while walking along the “dangerous” sidewalk in front of the property, and said that trucks often park on Harrison Avenue and threaten the safety of children getting off school buses that stop there.

“I’m just disgusted,” Degen said. “As a resident, I think it’s disgraceful that the way that [Weiss] presented on our side, he turned around and granted it with no explanation . . . There’s no reason for this to be happening. This was a right-and-wrong issue. This was abiding by the law of the BZA, and they did not, in a very bad fashion, yet they have been awarded. It’s infuriating.”

Town officials said Weiss could not comment on an open case.

Additionally, Minerva said at the hearing that the property owner found a buyer and is in contract to sell the parcel, but that the contract has contingencies. Minerva did not provide details about the sale, but said the owner requested more time to see the contract through or make the improvements.

“It’s embarrassing for them, as far as I’m concerned,” Degen said, referring to ZBA trustees. “They look like a bunch of fools. They’re making the rules, yet everybody’s stepping over the [ZBA]. So why should anyone follow the rules? It’s embarrassing for them, and it’s so beyond disrespectful to the community that you verbally stated how bad this company is and how they haven’t followed the rules, and yet . . .”

Civic Association Vice President Steve Greenfield, who has lived a half block from the storage lot for 10 years, said he has dealt with large trucks parking on Harrison Avenue, which block traffic and cause dangerous congestion issues across the street from the Dunkin Donuts.

“Me and my neighbors are very frustrated that the town is not holding a corporation to the same standard that they would hold a private homeowner,” Greenfield said, “that is to maintain their sidewalks, to maintain their fences and not create an ugly presence in the midst of our downtown.”