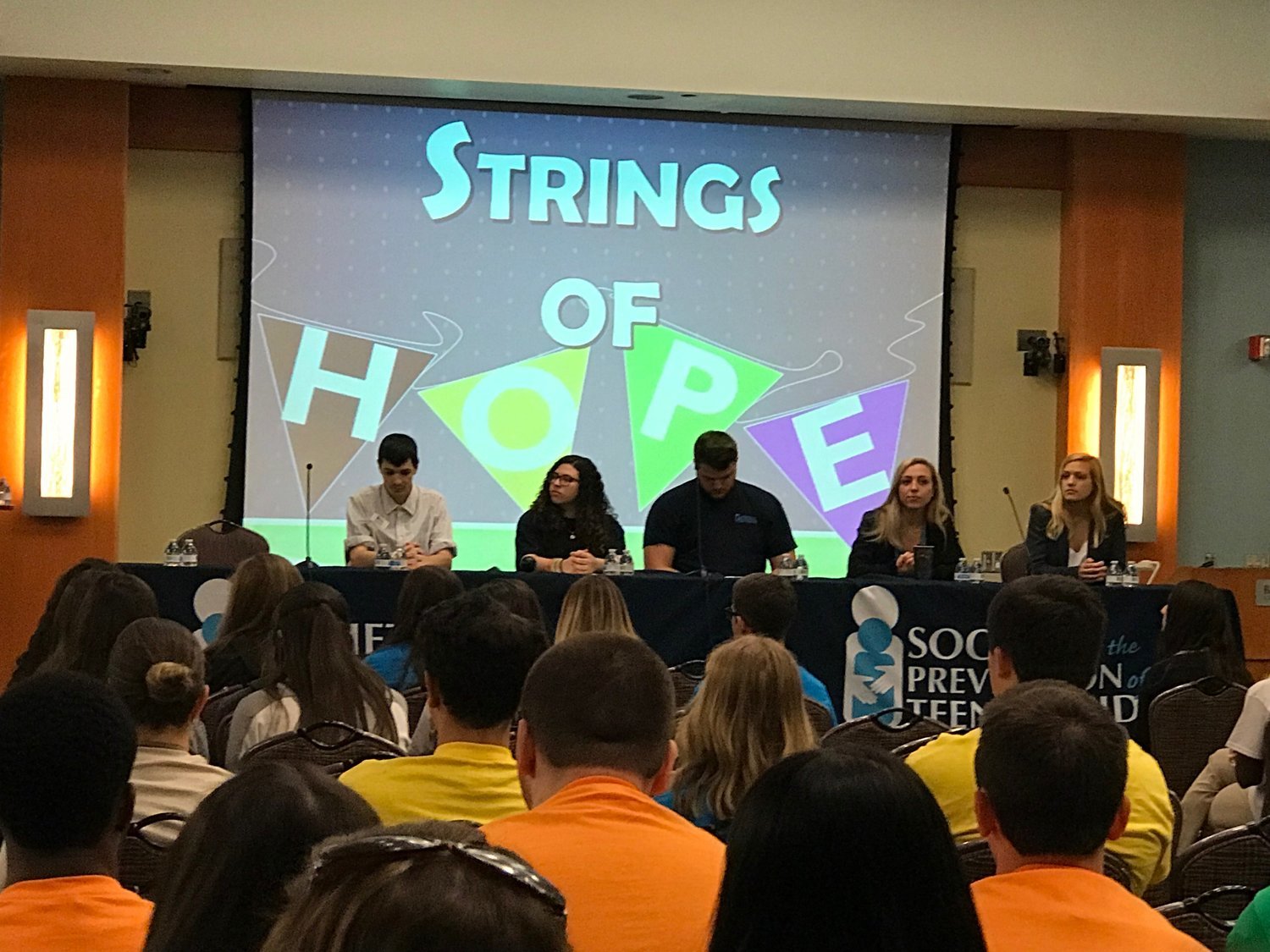 The 2019 summit, above, kicked off with a “Strings of Hope” resiliency panel, led by Stacy Brief, second from left, and others. The same panel started this year’s summit on March 29.
Courtesy Stacy Brief 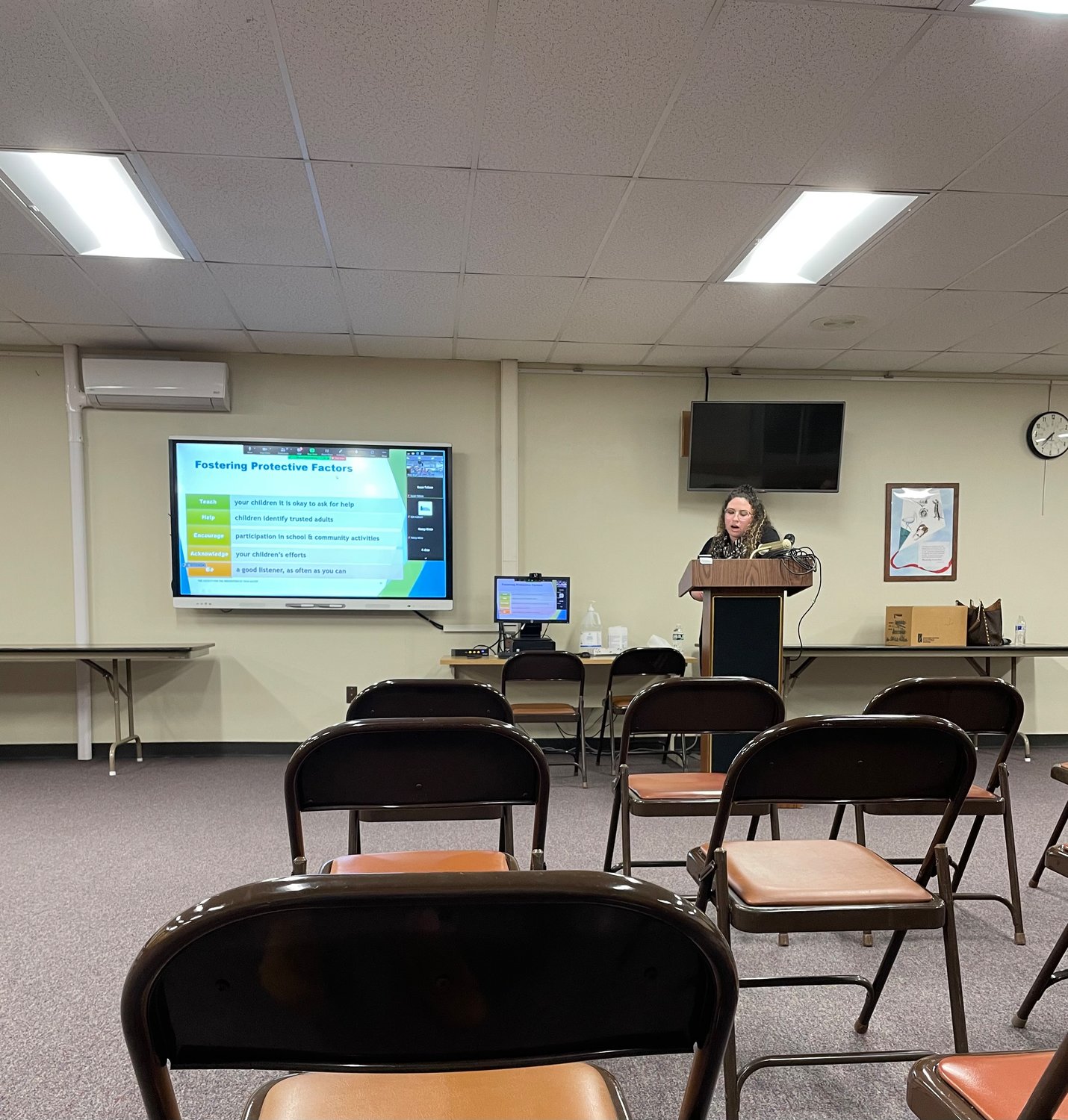 At a Follow-up presentation for parents on Monday, Brief taught attendees how to recognize the warning signs of suicide, and how to respond to them.
Jordan Vallone/Herald
Previous Next
By Jordan Vallone

The Bellmore-Merrick Central High School District welcomed teens and educators from 27 school districts across the county to the second Nassau County Youth Wellness Summit on March 29. The attendees took part in panels and workshops and listened to presentations given by educators and mental health professionals.

The summit, which took place at the Brookside School in Merrick, was hosted by the New Jersey-based Society for the Prevention of Teen Suicide and funded by Friedrich Air Conditioning.

Stacy Brief, 24 of Bellmore, a 2016 graduate of Wellington C. Mepham High School, is a licensed social worker and a therapist at the North Shore Family and Guidance Center in Roslyn. She also serves as Long Island coordinator for the Society for the Prevention of Teen Suicide. Brief told the Herald that she went through a difficult time in high school, struggling with anxiety and depression.

Her father, John Brief, works for Friedrich, and a colleague there who served on the suicide prevention society board of directors connected Stacy to the organization. “They suggested we check out one of their fundraisers,” she recounted. “It really spoke to me — it helped me make meaning of what I was going through.”

Her entire family is now involved with the organization, Brief said. “We had been volunteering and working with the society in Jersey, and we saw the impact it was having there,” she said. “I said, ‘Our community could have this, and we could do it too.’”

Brief helped assemble a committee of mental health professionals, educators and local school district administrators to create a wellness summit on Long Island. The first one took place at Brookside in 2019, but due to the coronavirus pandemic, the event took a two-year hiatus.

Four students and two staff members from each participating district attended this year’s summit, which was meant solely for high school sophomores and juniors. It began with a “Strings of Hope” resiliency panel, hosted by three young adults including Brief. Then attendees took part in workshops, and later in the day, a resource fair connected students with 16 groups on Long Island — therapeutic schools, safe centers and yoga studios, among others.

The last event was a keynote presentation by the organization Lead You, which led a “high-energy, interactive assembly,” according to Brief. Students were taught how to relieve stress, find safe coping skills and manage anxiety through interactive play and games.

In Bellmore-Merrick schools, the mental health and well-being of students has long been a priority. “Bellmore-Merrick is very proactive with addressing mental health,” Brief said. “They were incredibly supporting when I was going through my own struggles in high school.”

Susan Tellone, the clinical director of suicide prevention society, explained that the organization focuses on education and training rather then therapy. Since its founding in 2005, Tellone said, the society has taught some 650,000 teachers to recognize and respond to warning signs of suicide.

It also works with parents and community leaders.

The organization regularly held wellness summits prior to the pandemic, and its goal is to get conversations about mental health started. “We’re trying to model how to talk about mental health,” Tellone said. “I think just hearing you’re not alone empowers kids — they aren’t the only ones feeling this way.”

“I always take a few minutes to check in with some students, and they all felt really positive about what they had gotten out of the day,” Brief said of the summit. “One girl said that this just made her feel like she could do anything, and she felt a little less alone.

“It definitely seemed to be empowering for them.”

Tellone said that kids often think they’re the only ones struggling. “Once they start talking about it, they see it’s not true,” she added. “It’s OK to ask for help.”

On Monday, Brief hosted a follow-up meeting at Brookside School for parents, called “Parenting Skills to Enhance Safety and Resiliency.” She offered parents tips on how to work their children through problems, and how to recognize and respond to suicide warning signs.

“Adolescents don’t have the life experience to know that what they’re going through will get better,” she said. “Suicide is the second-leading cause of death in adolescents aged 11 through 17, but it is also the most preventable.”