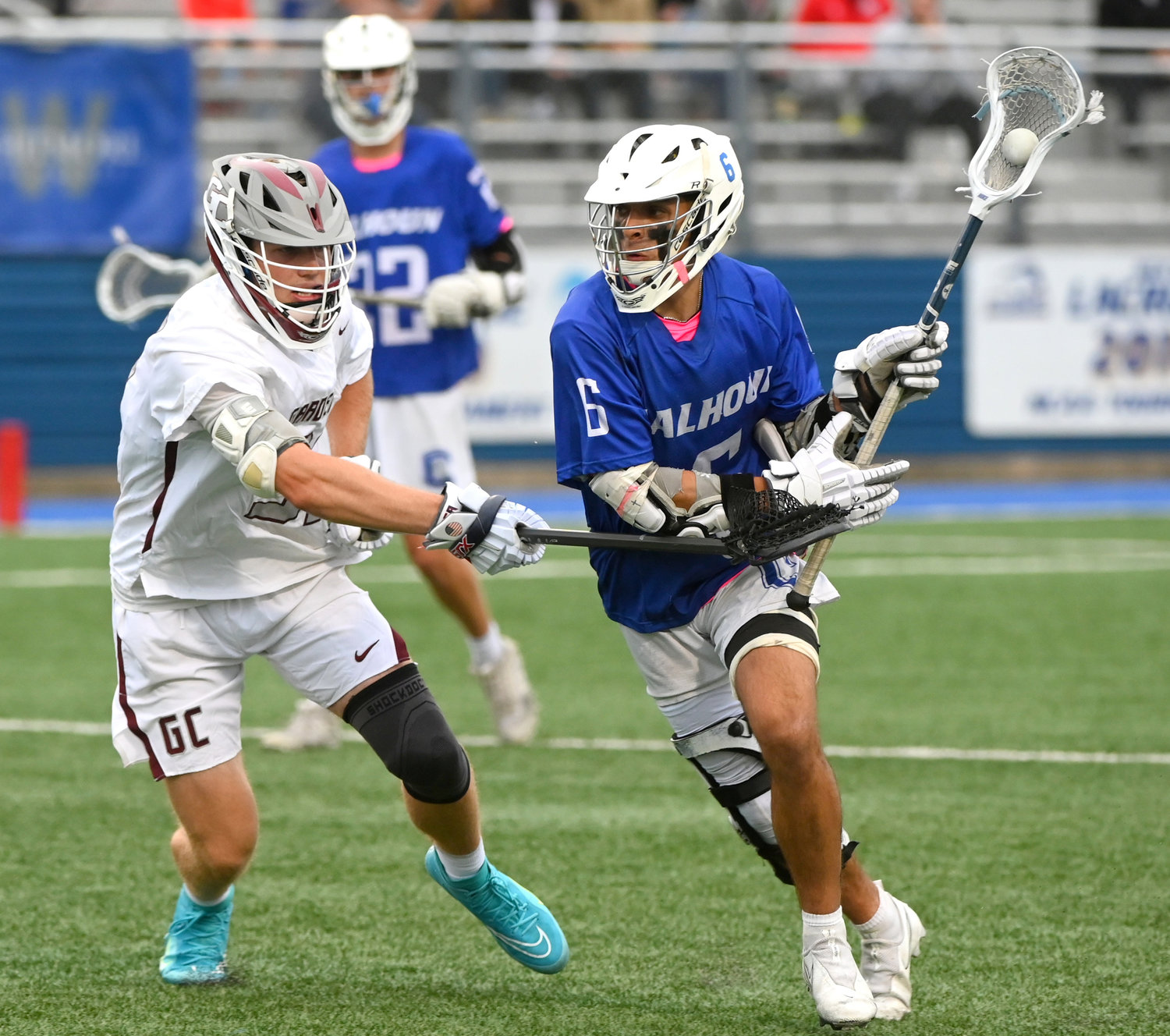 A.J. Molinari, right, and the Colts made a historic run to the county title game this spring and played tough against Garden City.
Donovan Berthoud/Herald
By Jamie deJong

Calhoun boys’ lacrosse lost the Nassau Class B championship game to Garden City, 12-5, on June 1 at Hofstra.
While the Colts’ would’ve preferred a different outcome, this loss does not dampen or alter what has been a terrific season for Calhoun.
Reflecting on the season that was, head coach Jim Femminella couldn’t have been prouder of what his group had accomplished. “After a slow start to the season, the boys’ belief in their abilities never wavered and they continued to stay the course knowing that getting to the county championship was possible,” Femminella said.
The final score was somewhat misleading as well, as this game was far from a blowout. A few Garden City goals what was an ultra-competitive game through the first three and a half quarters
Garden City won the first quarter 4-2, but neither team could generate great looks for most of the quarter. Junior Jayden Finklestein opened up the scoring for the Colts midway through the first, as fellow junior Michael Postillo found him cutting for what was one of the easiest looks that the Colts generated. Freshman Harley Finkelstein scored shortly after, as the ball found him right in front of the crease and he fired it home.


The second quarter was even more of a stalemate than the first, with both teams struggling even more so to get opportunities. Junior Jake Lewis scored the lone goal for the Colts in what may have been the signature highlight of the whole game, as his jump shot midway through the quarter inspired a sense of hope for the Colts. He finished the season with 30 goals.
Lewis then snuck in a low shot early on the third to make it a 6-4 game, but Garden City’s offense woke up from there. Calhoun couldn’t seem to maintain possession and Garden City took advantage.
The 12 goals that Garden city scored doesn’t reflect how well Calhoun’s defense stood up to a daunting task. Sophomore goalie Mark Restivo did all that he could to keep Garden City off the board, as he finished with 15 saves, with each one seemingly more impressive than the last. He finished the season with 83 saves, and surely the Colts must be excited to see how he builds on this terrific season next year. Junior Peter Thomman also was a monster in the clearance game, as he was a force in getting ground balls and in flipping the field.
The loss may sting a bit for a community that wanted to see the Colts pull off the upset and continue their magical season, but it was a memorable run.
Calhoun did not quit under the bright lights and made it competitive to the end. It got through MacArthur and Carey with exciting playoff wins to proved they belonged.
Femminella was more than content with how his group handled the big stage, stating: “I’m so proud of the effort and grit that the Colts showed in the county final.”