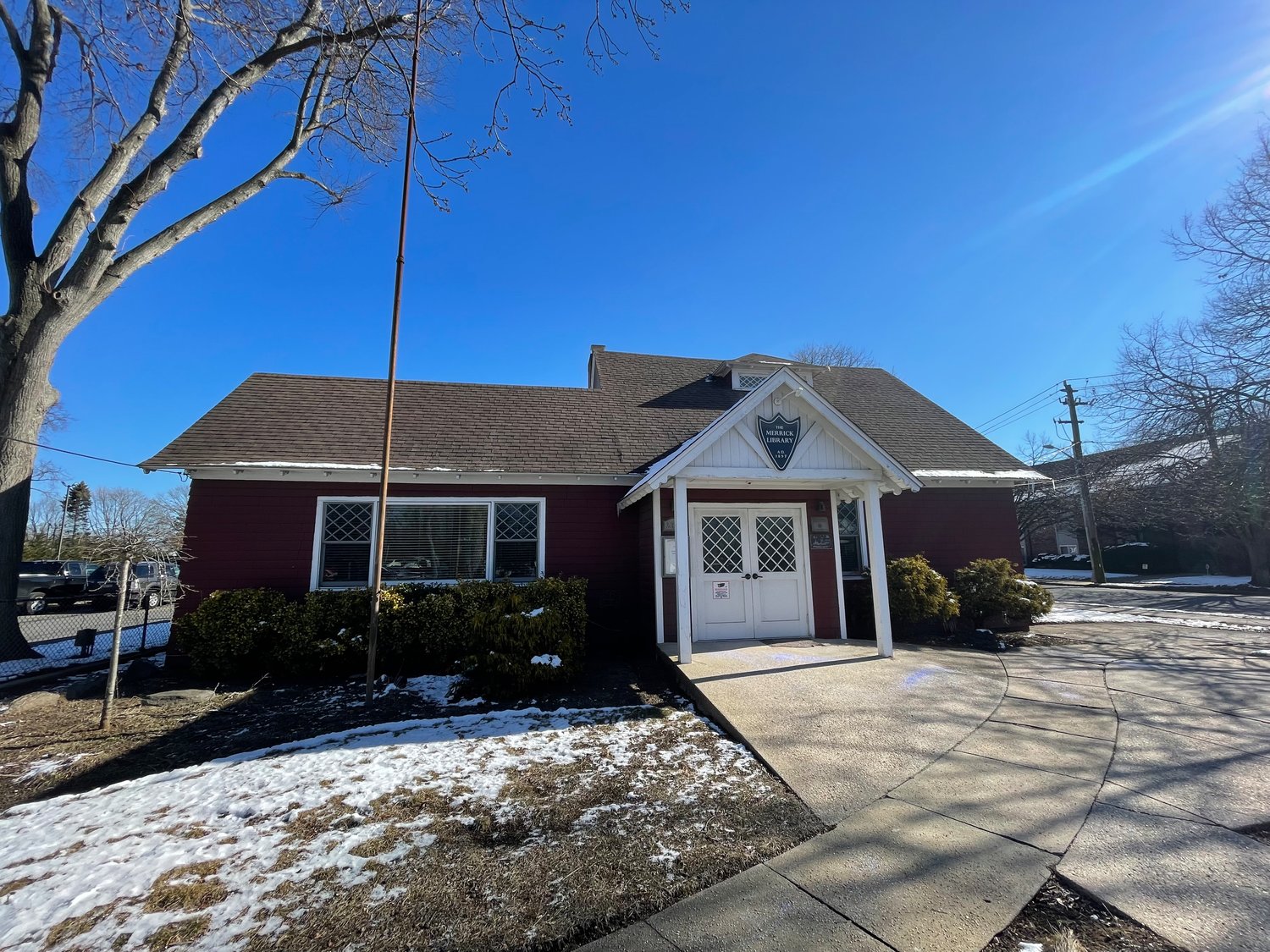 The original Merrick Library was built in 1897, after early Merokeans moved its operations out of a barn just down Merrick Avenue to its current location, at the corner of Merrick and Kirkwood Avenue. The building has been unused for many years, though recently plans have been discussed to turn it into a one- or two-room museum.
Jordan Vallone/Herald 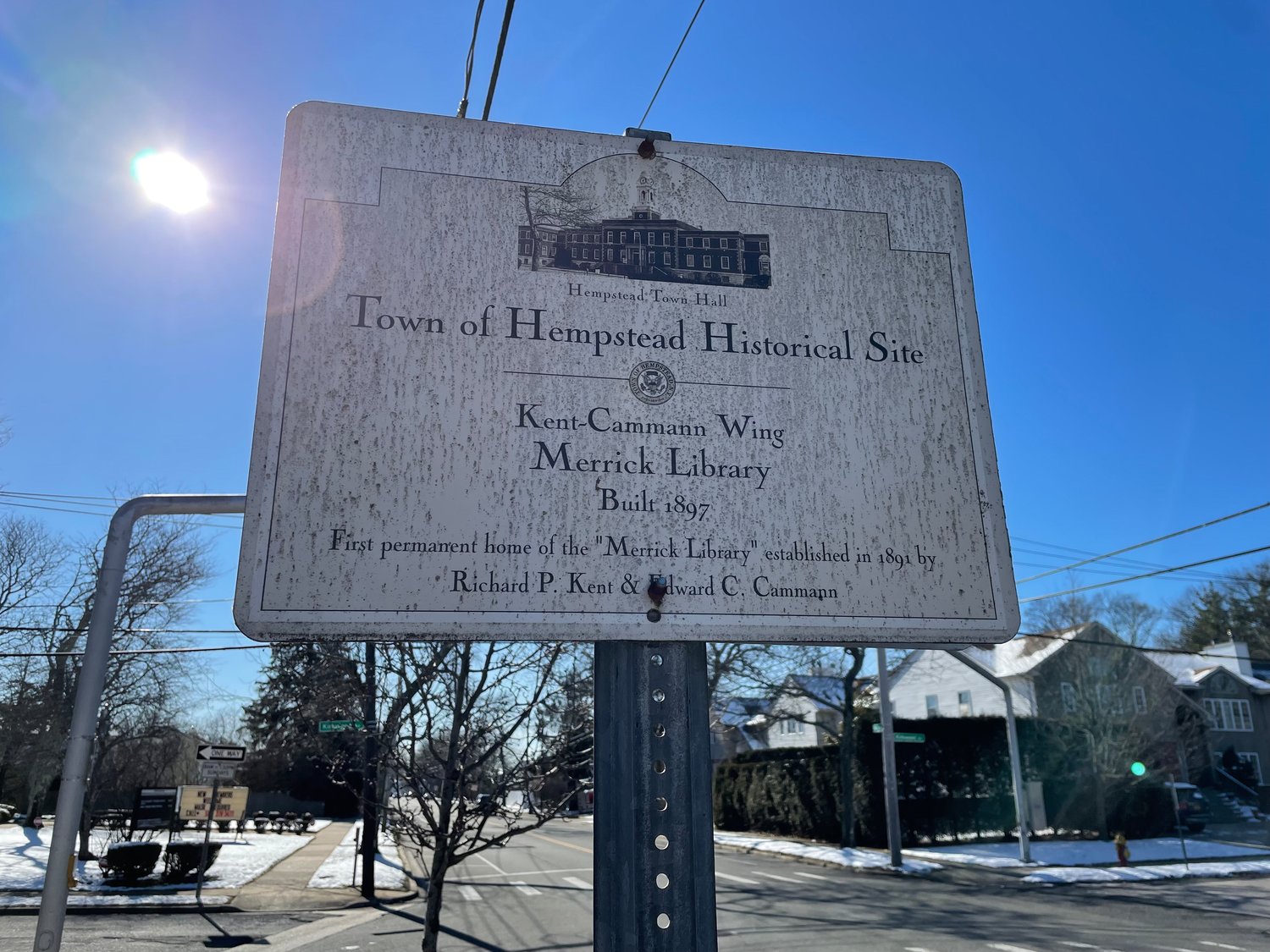 The library is recognized as a historical site by both the state and the Town of Hempstead.
Jordan Vallone/Herald 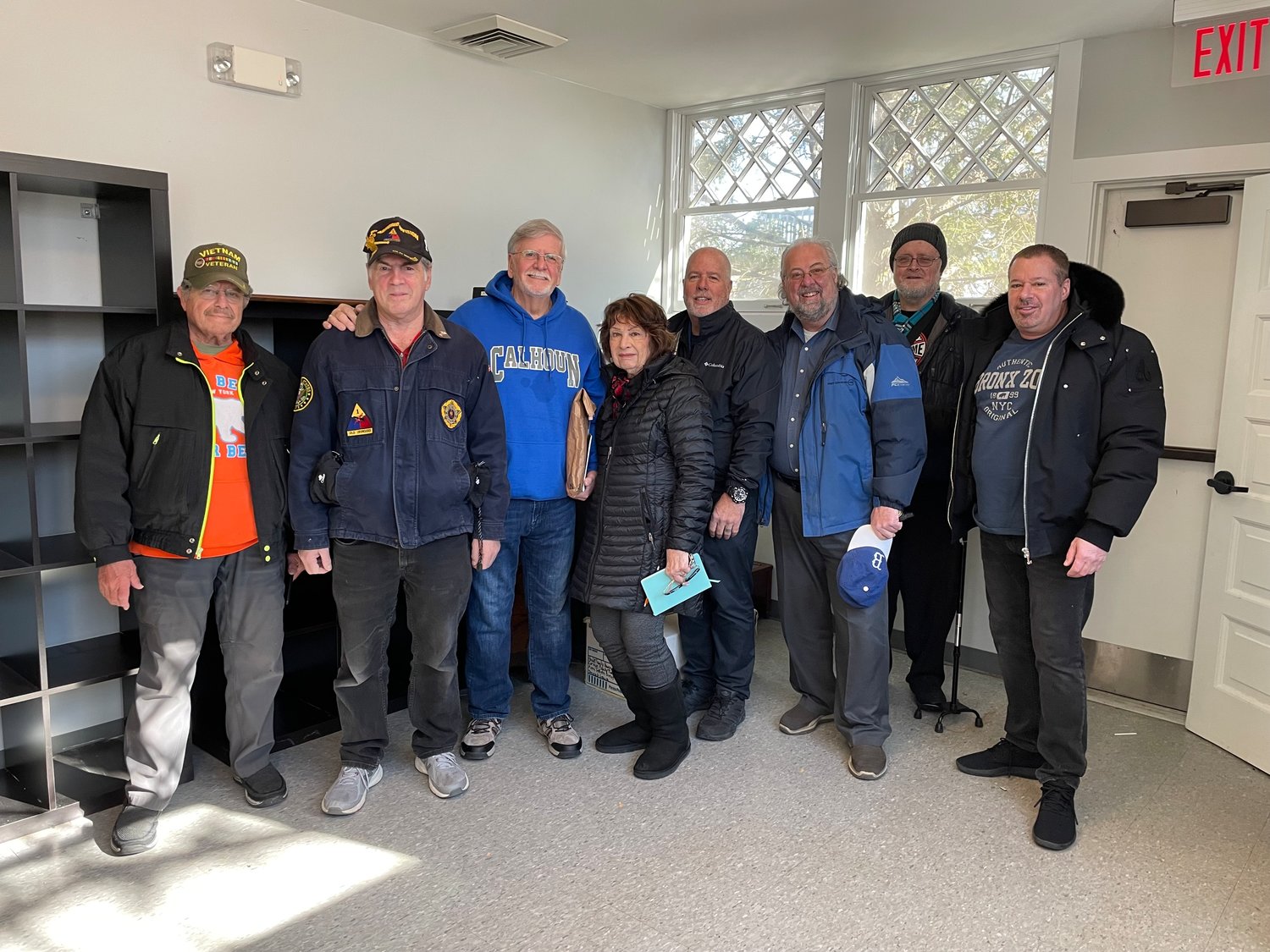 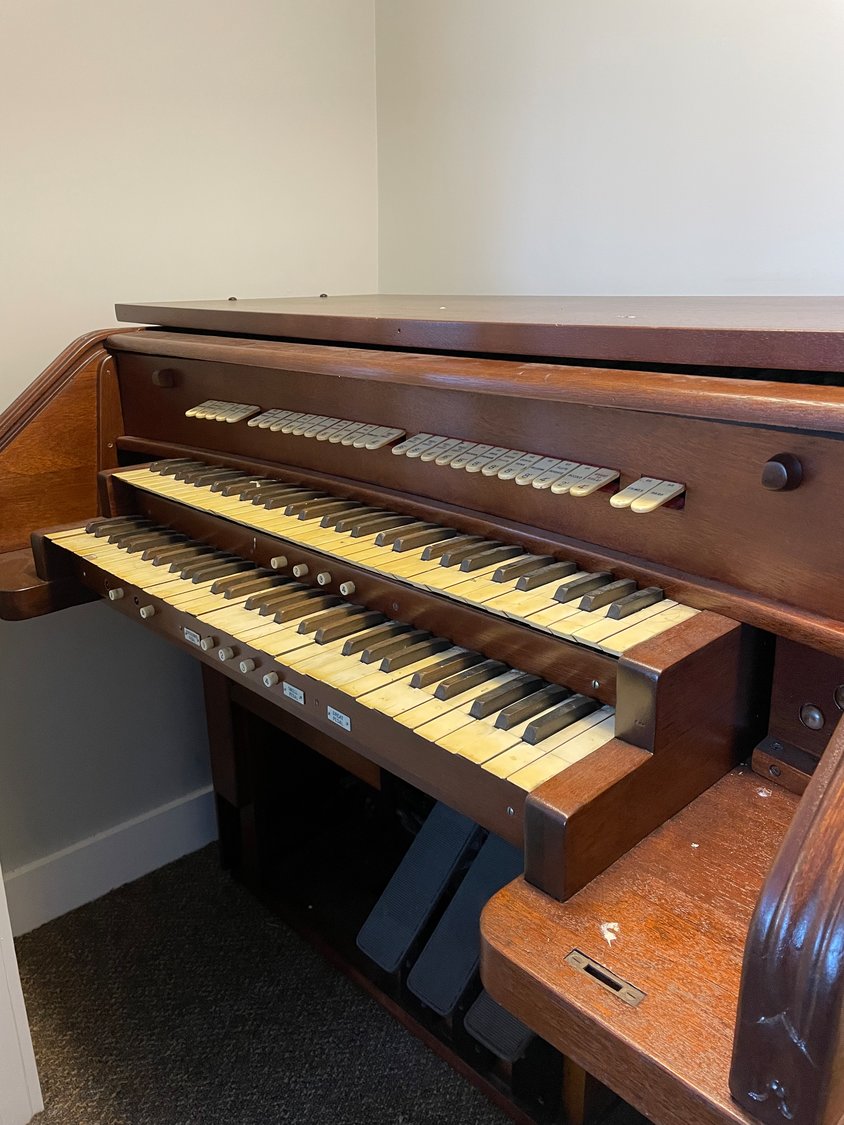 Inside the building is an antique pipe organ that was built in Merrick at the Midmer-Losh Organ Company. It would be part of the proposed museum’s display.
Jordan Vallone/Herald 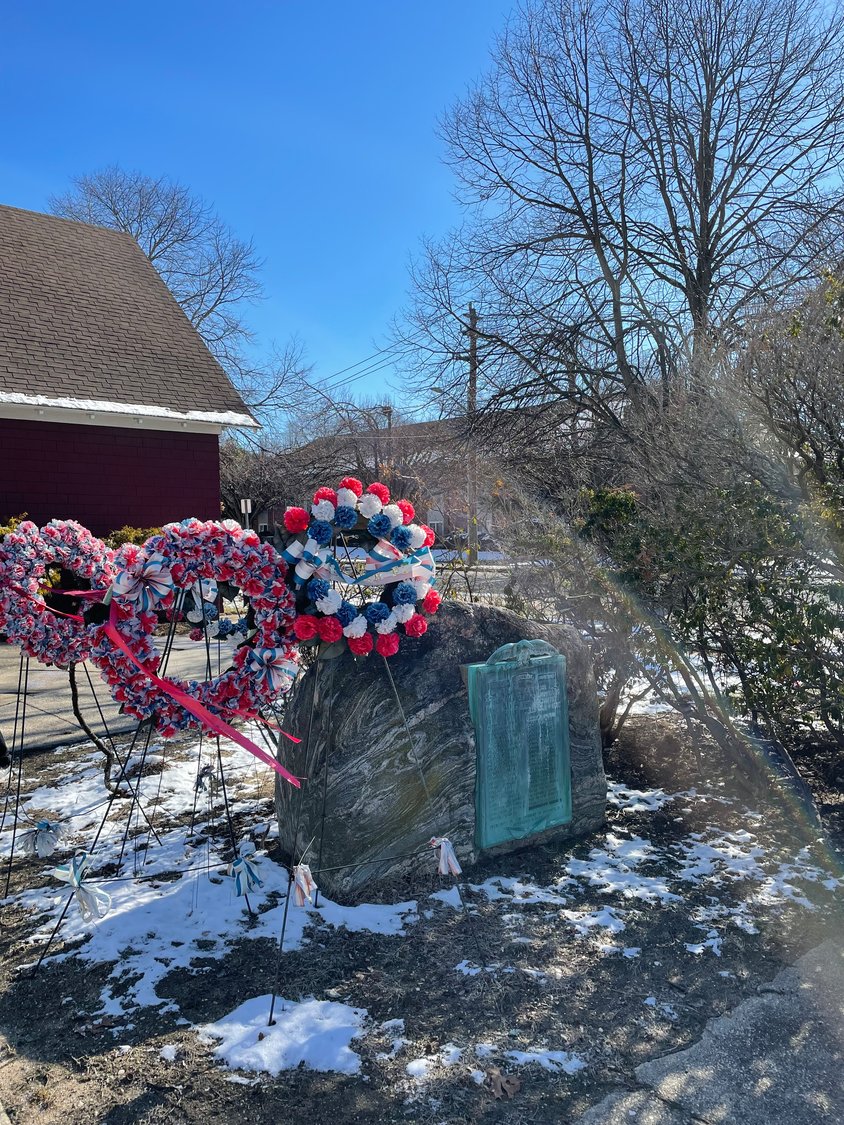 Working with the historical society, the Jewish War Veterans would like to refurbish the World War 1 memorial outside.
Jordan Vallone/Herald
Previous Next
By Jordan Vallone

Frequent travelers on Merrick Avenue have likely passed the original Merrick Library, though they may be unfamiliar with its history. The building — which has stood on the corner of Merrick and Kirkwood avenues since its completion in 1897 — is an accredited New York State Historical Site that has been unused for many years.

Recently, the Historical Society of the Merricks has discussed putting this treasure to use, and though a plan is in the earliest stages of development, the opening of a one- or two-room museum inside the original library may be in Merrick’s future.

Joe Baker, a lifelong Merrick resident who founded and serves as the president of the South Merrick Community Civic Association, is now the acting president of the Historical Society of the Merricks. Following the death of society President Larry Garfinkel last year, Baker and the remaining board members, Betty Lippai and Paul Laursen, want to reorganize the group and get plans moving.

“I’ll do what I can to keep the historical society going — we’re initially going to be reorganizing it,” Baker said. “One of our goals is to the take the old library in Merrick and make it into a display room.”

If a museum or display room is created, it could be used by local schools during the week, and perhaps be open to the public on weekends.

The Merrick Library has a storied history, and has occupied several locations over the decades. Early Merrick residents Edward C. Cammann and Richard P. Kent established the First Library of Merrick in 1891, in a barn on the William Hewlett Farm off Merrick Avenue, according the Merrick Library Archive.

In 1897, the Cammann family donated the property at Kirkwood and Merrick Avenue, and the “first permanent home” of the library, according to its historical marker, opened on May 8 of that year. Extensions were added in 1949 and 1956, and a new library opened in November 1962, just a block away, on the corner of Narwood and Merrick. A new facility opened at the Narwood Avenue location in 2005.

The 1897 building is still there — and was used as a temporary library during construction of the newer buildings. After a fire in 2004, its interior was refurbished.

The site’s ownership has changed throughout the years. According to Dr. Dominick Palma, Superintendent of the Merrick Union Free School District, the district owned the building many years ago, but eventually gave it to the newly constructed library. Just before the start of the Covid-19 pandemic, the library gave the building back to the district.

“The library has an amazing history — it has been in a lot of different buildings,” Palma told the Herald. “The school district would be thrilled if the historical society would acquire the building.”

In order for the historical society to use the building, a deal would have to be arranged with the district and voted on as a referendum. But according to Baker, there are many steps the society wants to take before that can happen.

In the last few years, many of its board members have died, including Vice President Frank Soling, Treasurer Neil Yeoman and Historian Jerome Medowar. Though Baker is directing the group for now, it would welcome a new president. In order for the museum to operate as intended, a historian will also need to be appointed.

“Basically right now, its just an idea,” Baker said of the museum. “It’s something I’ve been thinking about for years — we don’t know if it’s going to happen.”

The historical society has a handful of artifacts and documents in its possession, including a Civil War-era American flag and an antique pipe organ that was built in Merrick, at the Midmer-Losh Organ Company. Both items, among others, are stored in the old building, with permission from the school district.

Baker noted that the society is open to all local artifact and document donations from residents. The group also plans to meet with Dan Chuzmir, director of the Merrick Library, to see what it may have in its databases. Reorganizing the society, collecting artifacts, and meeting with Chuzmir are three things that Baker would like to see happen before the society begins working with the district.

“The district has no specific plans as of right now,” Palma said of the building. “Just pre-pandemic, there were preliminary discussions about somehow selling it.”

“I am really hoping they get this off the ground,” he said of the historical society’s plans.

Inside the building, the two rooms directly to the left of the front entrance would likely be the best location for display space. Working with Jewish War Veterans Post 652, the historical society would also like to refurbish the building’s original flagpole and the World War 1 memorial outside.

“Nothing is going to happen too fast,” Baker said. “The building is the perfect location for artifacts, because this building is history in itself, and it’s in great shape. It would be interesting for people to see it.”

Anyone who has an artifact to donate or an interest in joining the historical society can contact Baker at jalan6111@optonline.net or at (516) 978-8310.

Class of 2022 graduates from North Shore