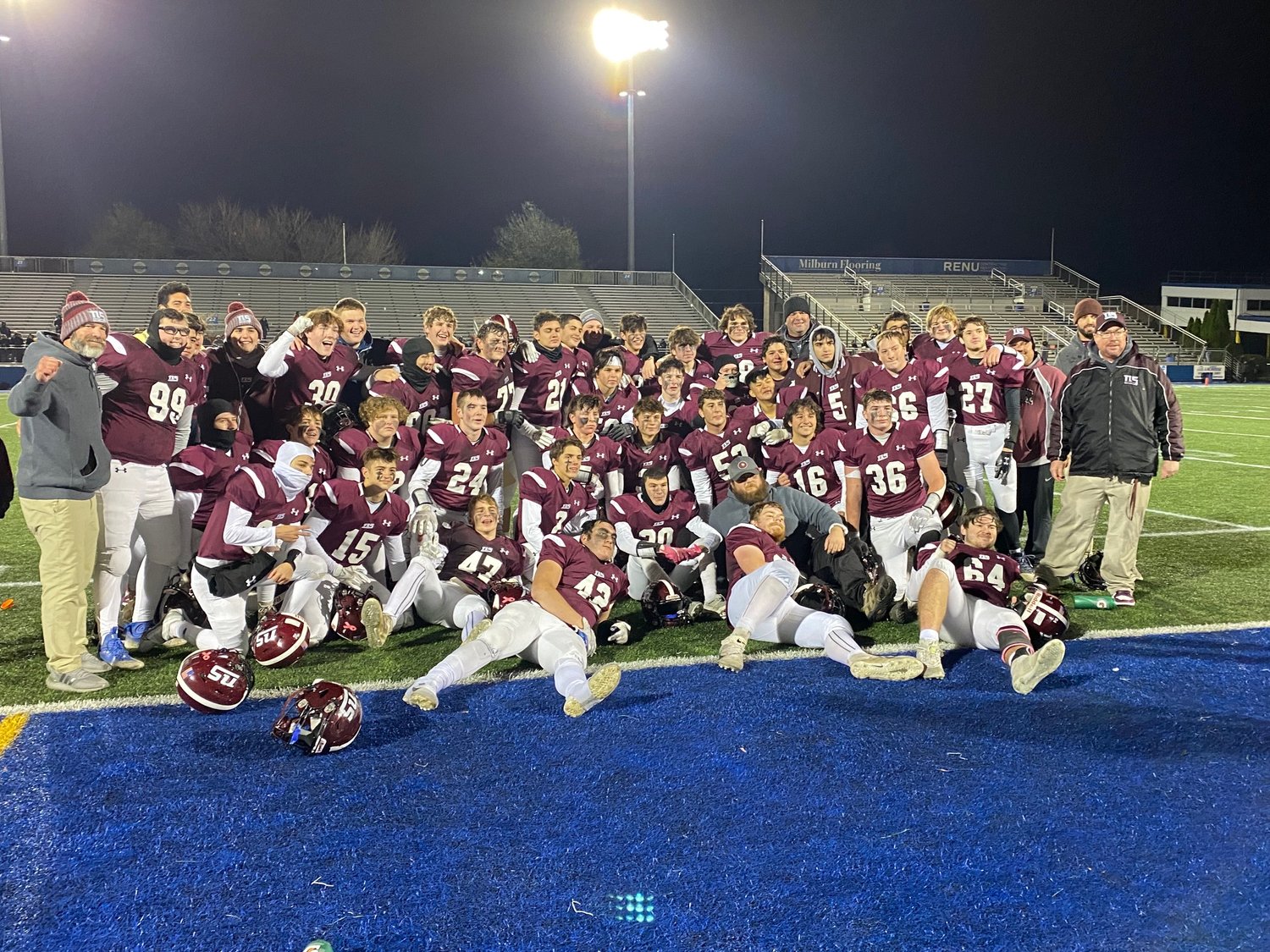 A special play on special teams and a late dose of its workhorse running back was all North Shore needed to repeat as Nassau Conference IV football champions.

Senior Pat Godfrey recovered senior Michael Granelli’s punt block for a touchdown late in the first quarter and the top-seeded Vikings never trailed in Friday afternoon’s 20-6 victory over No. 3 West Hempstead in the county title game at Hofstra.

Senior Nicholas La Rosa added touchdown runs in each of the last two quarters, including a game-sealing 10-yard score with 4:05 remaining, as North Shore (11-0) won its 19th consecutive game and advanced to face Bayport-Blue Point next Friday for the Long Island Class IV championship at Hofstra at noon.

“It’s the best feeling in the world,” said La Rosa, who rushed for 117 yards on 20 carries and also led the defense with 10 tackles and a fumble recovery. “The first one will always hold a special place in our hearts and now that we’ve repeated, our mindset is we’ve got one more game left,” he added.

“We have tremendous senior leadership again and these kids did an outstanding job all season of taking it one step at a time,” North Shore head coach Dan Agovino said. “West Hempstead is a tough opponent. I couldn’t be prouder of our guys. They’re true champions.”

West Hempstead (9-2) reached the county finals for the first time since 1985, eliminating Island Trees and Seaford along the way, and was seeking its first title in 40 years. The Rams’ only other defeat this season came Oct. 15 at the hands of North Shore, 14-7.

“We outgained them but we shot ourselves in the foot too many times,” West Hempstead head coach Dom Carre said. “It was a great season. Nine wins was the most in team history. It stinks that it’s over.”

The Rams dug a hole late in the first quarter. They lined up to go on fourth-and-inches from their own 15 when a false start moved them back five yards and brought out the punt unit.

“We saw some things on film where they were getting punts off slow,” said Granelli, who missed last season’s playoff run due to injury. “I was able to break through and get both of my hands on it. I couldn’t dive on it in the end zone but I knew my teammates had my back.

“It’s awesome to be out here with my brothers celebrating,” he added.

Godfrey’s recovery in the end zone and semifinal hero Michael Fleming’s extra point gave the Vikings a 7-0 lead it held for the remainder of the half.

North Shore fumbled away the kickoff to open the second half but an interception by junior Garret Gates erased that mistake and put the Vikings’ offense back in business at the West Hempstead 37.

Senior quarterback Peter Liotta carried three times for 15 yards and La Rosa took care of the last 22 as the Vikings upped their lead to 13-0.

West Hempstead responded to La Rosa’s first touchdown and drove 76 yards on eight plays to get on the board. Senior A’Lorenz Chapman (97 yards on 12 carries), part of the Rams’ multifaceted ground attack, broke runs of 17 and 32 yards on the drive while junior Gavin Lee gained 19 yards on two touches, setting up senior quarterback Corey Pierre’s 1-yard score that cut the margin to 13-6.

The Rams were just shy of midfield on their next possession early in the fourth quarter looking to pull even when North Shore’s defense, led throughout by La Rosa, Granelli, Liotta and juniors Anthanasios Alafogiannis and Daniel Roper, came up with its biggest stop of the game on fourth-and-4.

“When you have a back like La Rosa combined with how well the line was blocking, we didn’t need to fix anything that wasn’t broken,” Agovino said.

Colby Siergiej provides a safe space for teens at BOCES