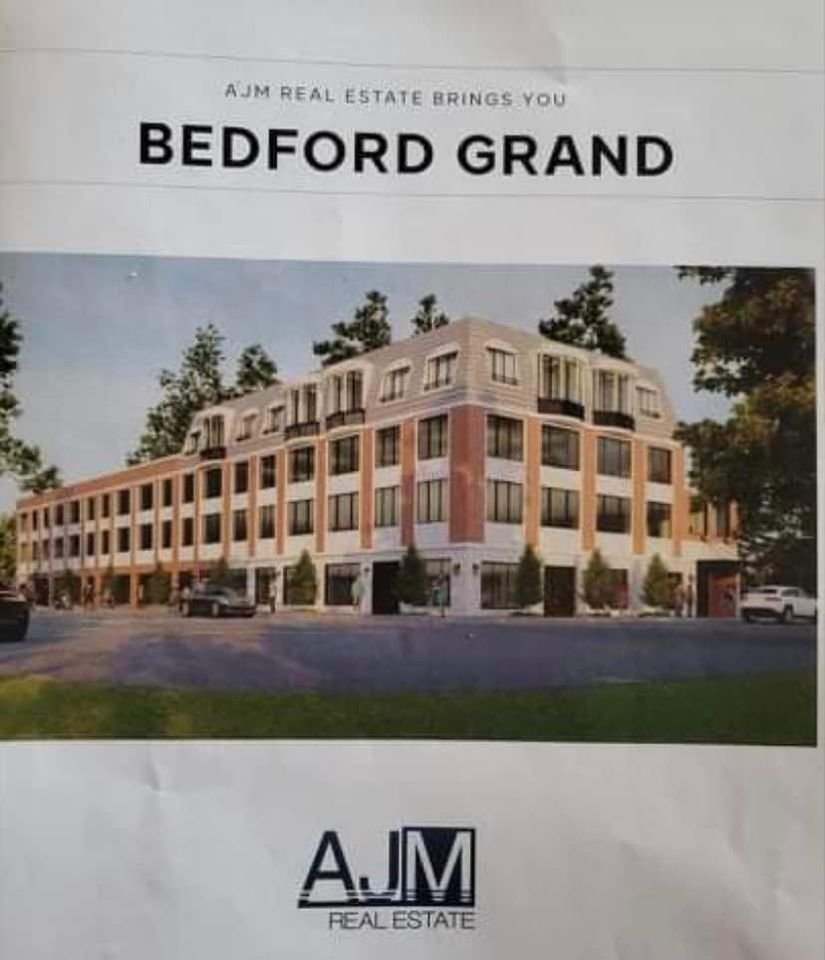 Some Bellmore neighbors have come out against a proposed apartment building that would replace a former Citibank location on Bedford Avenue.
Courtesy Carol Lynn
Previous Next
By Jordan Vallone

AJM Real Estate — which recently completed several other projects in Bellmore, Merrick and Wantagh — also wants to add ground-floor retail to 2160 Bedford Ave., the former site of a Citibank that closed in 2014.

The meeting — organized by the Central Bellmore Homeowners Association — attracted more than 100 people just a block away from the development site. Those opposed cited a number of concerns including urbanization, traffic impact and parking congestion, and the ability of emergency services to reach the building.

Marge Congello, the homeowners association’s president, explained that AJM had taken its proposal to the Town of Hempstead Board of Appeals, seeking several variances related to parking and building height.

“He cannot legally do what he is intending to do,” Congello said. “The codes do not allow it. The codes were written to protects us, and he is not allowed to do what he is proposing.”

Congello organized the meeting and invited both the developer, Adam Mann, and his attorney, Bill Bonesso. The hope was to ask questions, and even reach compromises, if there were any to be had.

One of the first problems addressed was height — the proposed building is reportedly two stories over what is permitted. Bonesso is working with the Nassau County Planning Commission, he said, to allow that adjustment in this case, while working to reduce what might otherwise be a too-urban feel.

“What they recommended was that the fourth story and the third story be stepped back,” Bonesso said, “so that you don’t have a four-story façade on Bedford Avenue.”

Another issue was parking. Many patrons of Bedford’s businesses — a central hub for local commerce in Bellmore — say they already have a difficult time parking. Vehicle overflow often crowds residential streets. The proposed building would require 81 spaces, per town code, but developers are reportedly planning for half that, in a garage, with an entrance from Grand Avenue.

“When you look at buildings that are designed like this in close proximity to walkable neighborhoods and train stations, you do not need the amount of parking the town says you need,” Bonesso said.

Bonesso and Mann also said they would bury power lines to the building, citing concerns from the Bellmore Fire Department that overhead wires could obstruct emergency access. Additionally, the building’s elevator will be large enough to fit a stretcher.

As far as traffic and road congestion are concerned, the developers called it a non-issue.

“Our traffic consultant has looked at the number of trips that will actually be generated from use like this,” Bonesso said. “It’s very minimal.”

Currently, the Citibank property is owned by the Path Land Holdings, which reportedly collected rent through 2018. Afterward, the building fell into disrepair, Mann said. Path Land had several rental inquiries for the property, but the building was too damaged.

But Congello wasn’t buying it.

“They created a hardship,” the association president said after the meeting. “They were enriched, but they’re going to claim hardship.”

Because the development is still in the planning stages, Mann said, there is room for negotiation. He even agreed to consider selling units instead of renting them — something those attending appeared to be more open to.

Another unrelated apartment building also is planned in North Bellmore to replace the former Temple Beth-El synagogue on Bellmore Road.

For those who left New York City seeking a different life on Long Island, it seems the developments will never end.

“Many of us, like myself and my family, moved out of the boroughs to Long Island, seeking to leave the urban life,” Congello said. “Right before our eyes, we are beginning to see that slowly change.”

The Town of Hempstead was against accessory dwelling units, originally part of Gov. Kathy Hochul’s state budget, that would have allowed some single-family homes to create space they could rent out to others.

With that in mind, Congello says the town should not allow proposals like the Bedford Avenue apartment development to go through. “I can’t give up,” she said. “This is too important.”

Congello urged neighbors to write letters, report their concerns, and attend the zoning appeals board hearing on the proposal May 18 at 2 p.m.