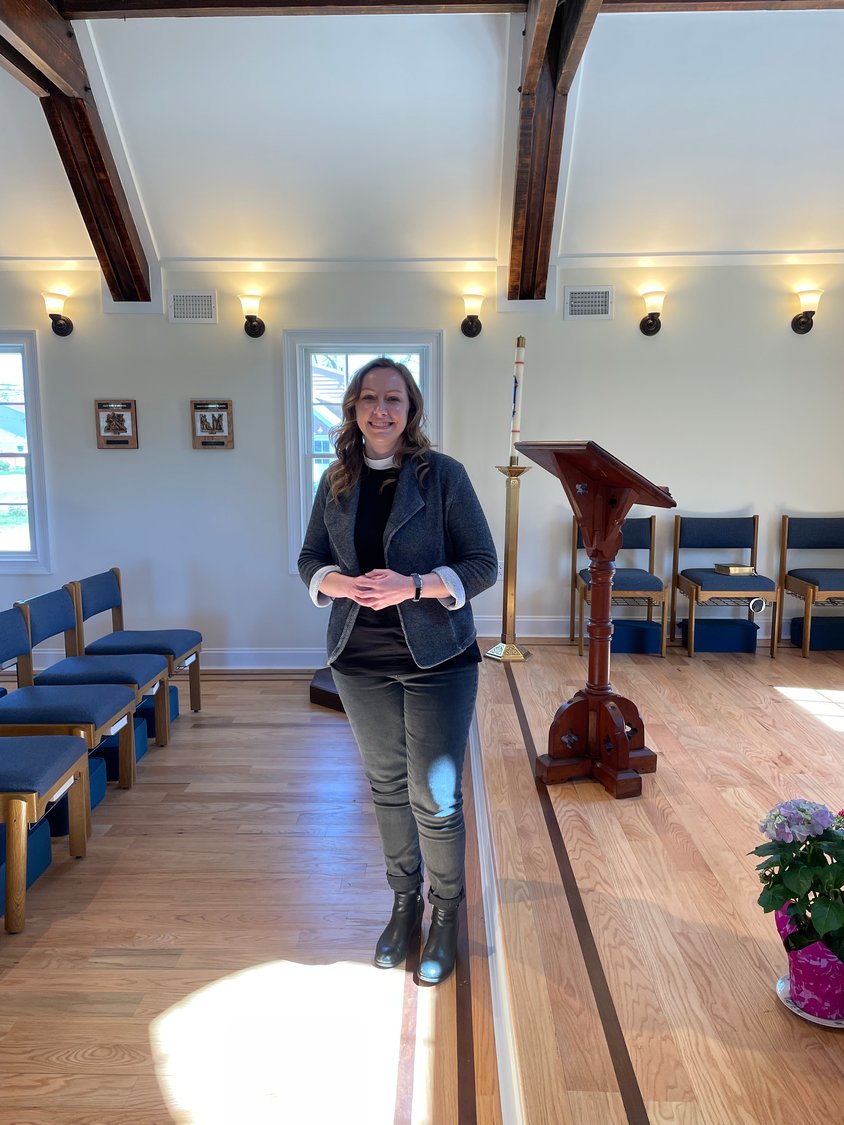 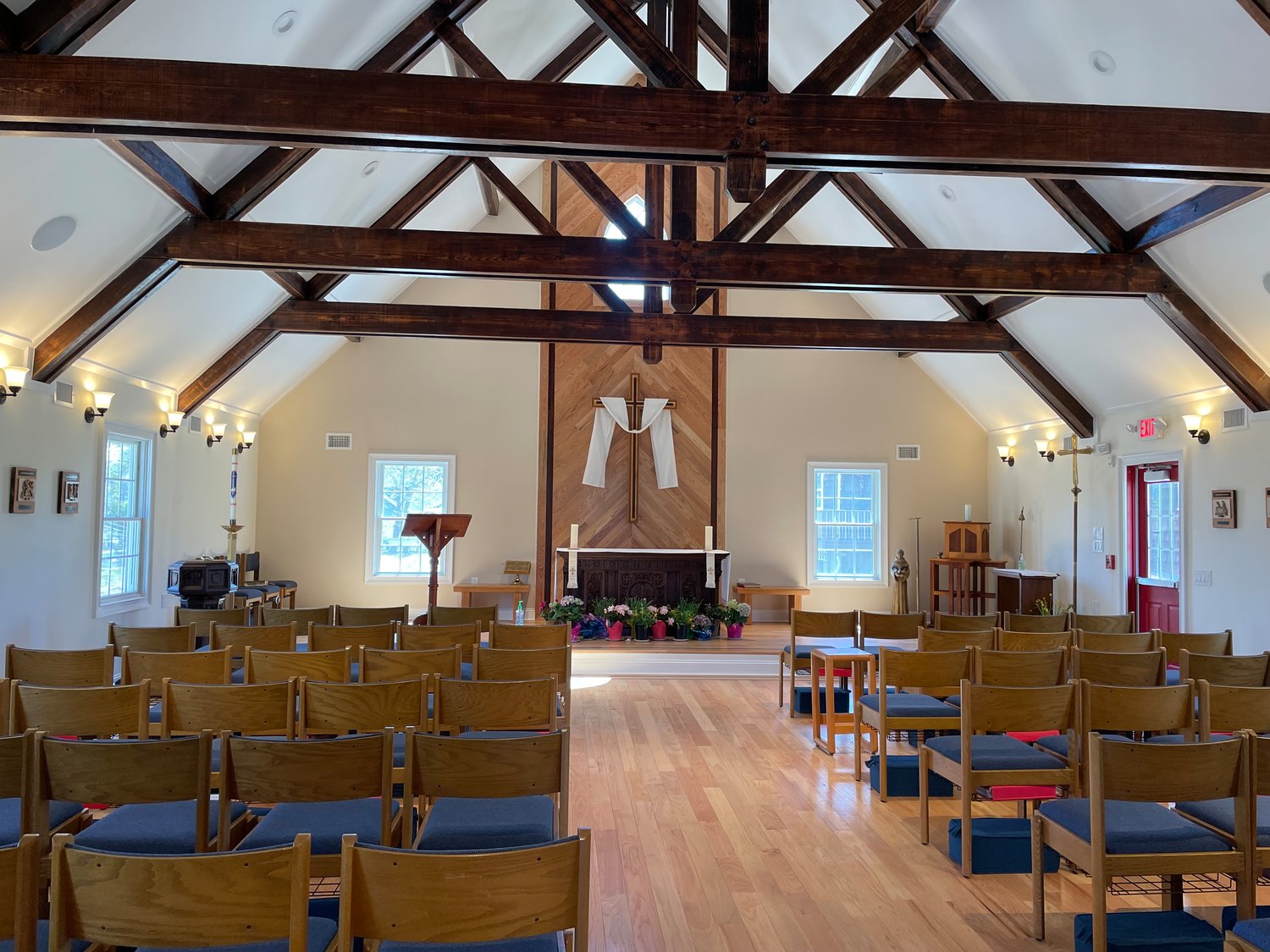 The parish recently celebrated the reopening of its church, which had been undergoing extensive renovations since last year.
Jordan Vallone/Herald
Previous Next
Some FAQs on St. Francis and its garden

Services are held every Sunday at 9 a.m. in the newly restored church.

- Volunteering in the garden is open to all, on Wednesdays from 3 to 5 p.m., and Saturdays from 9 a.m. to noon.

Following an eight-month-long stretch without a leader, St. Francis Episcopal Church welcomed the Rev. Grace Flint to its ministry on April 1. The church’s previous leader, Brother Christopher McNabb, left last August to move to Washington state, where he works for the Diocese of Olympia doing resettlement work with immigrants.

Flint, who is originally from Kentucky, found her way to St. Francis by working with services that help place those looking for jobs with churches that have openings. She attended seminary in Berkley, Calif., and has never lived on Long Island, but told the Herald she had a number of ties to the area.

“I have a lot of friends and connections,” she said. “My family is in central Pennsylvania, so I’ve never lived on Long Island before, but it’s a bit of a homecoming in terms of renewing connections.”

Before coming to St. Francis, Flint was the assistant rector at St. John the Evangelist Church in Chico, Calif. In 2018, she noted, Northern California was devastated by a series of wildfires, and the parish she worked with did significant relief work for people who were affected.

“By the time I arrived, Covid was in full swing,” she recounted. “So we were dealing with crises on multiple fronts. People were still trying to get into their houses and figure out their lives after loss, and also responding to Covid and constraints and, you know, all the changes to church life.”

In the absence of a permanent leader at St. Francis, Sunday services had been led by the Rev. Willis Lingayo, according to Kristin Talbot, the church’s office and garden manager. Lingayo is referred to in the Episcopalian diocese as a “supply priest.”

“We are forever grateful for him that he got us through such a strange time, between having no priest and also navigating the impacts of the pandemic,” Talbot said.

Having served as a church leader at a time of such uncertainty, Flint said she was familiar with having to adhere to local and state guidance when it came to holding services in person or virtually. “We did meet in person when it was possible,” she said of the congregation in Chico. “It was a lot of flexibility, a lot of resourcefulness — imagination — and curiosity to what people need, and might respond to.”

At St. Francis, masks are not mandatory, and services are held in person. During Holy Week, leading up to Easter, Flint said, the church did deal with a community exposure to Covid-19.

“You want to make people to feel welcome to do what is most comfortable for them,” Flint said, “but we learned of exposure in our community to Covid, and out of an abundance of caution and my desire to protect the parish, I put a mask on. And I asked everybody else to do so as well, and we did, the rest of Holy Week.”

St. Francis had been under construction since early last year, undergoing an extensive restoration. Though the building has no cornerstone, the parish estimates it was built sometime between 1913 and 1919, making it over 100 years old.

The first service Flint held, she said, was on April 3 in the church hall, a separate building, which was being used as a temporary meeting place. The following weekend, on April 10, parishioners processed from the hall to the church, and celebrated their first service together in the new space.

“I feel, you know — and I’m going to keep saying this — I am so privileged to be here,” Flint said. “It is such an honor to be able to be with these people at this time, in this space, and hit the ground running.”

Speaking about St. Francis’s community garden, which is known around Bellmore and Merrick as an interfaith gathering place for volunteering, Flint said she was excited to come to a church where community outreach is already part of its values. And Talbot said the garden volunteers were looking forward to working with Flint, and having a solid growing season. “She’ll be able to lead and guide us as we continue to develop,” Talbot said. “So that’s what’s really special about this season for us.”

“God has given us work to do together,” Flint said of the parish. “I’m excited to find out what it is. Based on my own interests, I’m really glad that we have the outreach of the garden. There’s just tons of potential.

“In my experience, planning is good,” she added. “There is certainly a value in that. But we just have to stay open to the surprise of what happens, and really open up, and stay ready for what God brings to us.”