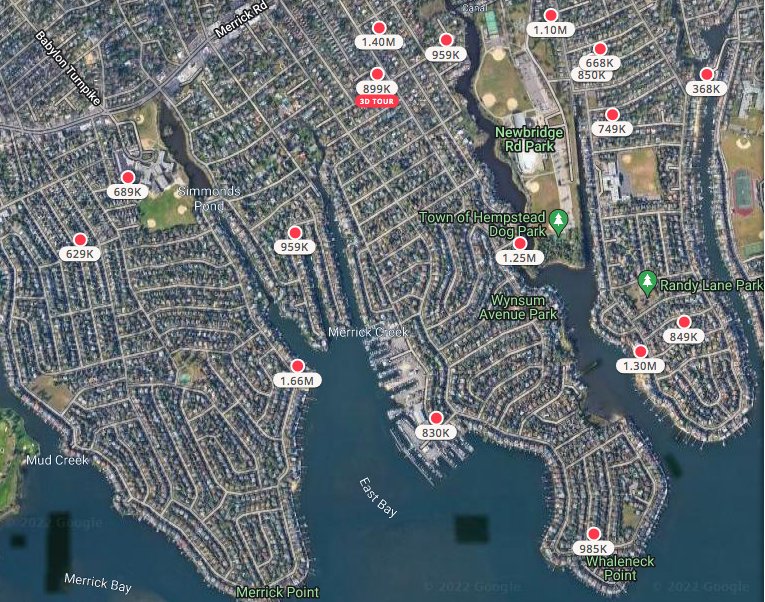 With the sale of a home for almost $2.5 million set to be finalized this week in Merrick, it is evident that South Shore real estate prices are on the rise due to high demand and low inventory. This map of the Bellmore-Merrick shores shows hardly any homes for sale under $600,000, the median listing price on Long Island.
Courtesy Zillow Group Inc.

Property prices in Bellmore-Merrick have been on a steady rise over the past two years, and the coronavirus pandemic has been a contributing factor.
Courtesy Michael Sherack and One Key Multiple Listing Service

Property prices in Bellmore-Merrick have been on a steady rise over the past two years, and the coronavirus pandemic has been a contributing factor.
Courtesy Michael Sherack and One Key Multiple Listing Service
Previous Next
Sold property prices, then and now

Sold property prices in Bellmore-Merrick in March 2020, according to One Key:

Updated: 10:50 a.m., March 5: Since the start of the coronavirus pandemic, Long Island real estate prices have been on the rise due to an influx of people seeking homes who are met with limited inventory. With the sale of a home for almost $2.5 million sale set to be finalized this week in South Merrick, the South Shore real estate market reflects the trends that are being seen elsewhere on the island.

Real estate agent Tatyana Agron, who works with VI Properties, a Hewlett-based subsidiary of Compass Inc. that brought the buyer to the home, told the Herald that it will be the highest registered home sale Bellmore-Merrick has ever seen.  Svetlana Vaksman, was the other real estate agent from Compass who brought the buyers over.  Seth Pitlake from Douglas Elliman, was the listing agent on the house. Douglas Elliman has been the listing agency for the house, located on Halyard Drive, for the past few years. The home will close for just under the $2.5 million asking price on March 4.

When a sale is registered, there is a government record of it. “We don’t know what we don’t know,” Agron said, meaning that there is a chance that a higher-priced home may have been sold privately. “But from what we know, this is the highest-priced sale ever in Merrick — not just in recent times,” she added.

According to Agron, the sale in Merrick is nothing out of the ordinary in the current real estate market. “They’re definitely on the rise,” she said of home prices. “I don’t think buyers, sellers or brokers expected this. And not only have prices been on the rise, but we are experiencing the lowest amount of inventory ever.”

The inventory is so low, she said, that most homes go into contract after the first open house. “Long Island has never experienced this before,” Agron said.

According to Realtor.com, the largest real estate website in the United States, which publishes home listings and details market trends, the median home price in Bellmore is $694,000. In Merrick it is slightly higher, at $699,000. The median listing price on Long Island is $600,000 — $50,000 higher than it was just a year ago.

The Halyard Drive property was built in 1975, and last sold for $1.5 million in 2007. Real estate data from Realtor.com shows that the house has been on and off the market a number of times since then, and its price has varied. A report from Greystone Properties Inc. shows that its highest listed price was over $3 million at one point in 2016. Most recently, it had been on the market for at least a year, Agron said, before going to contract.

She explained that there has been an influx of people moving to Long Island from urban areas, seeking more space and fewer Covid-19 restrictions. In New York City, for example, vaccination cards are required to enter a restaurant. This, Agron noted, along with other concerns, are reasons why families are seeking to live elsewhere.

Normally, the real estate market is at its busiest between late February and July, she said, because families like to settle into homes before the start of a school year. More recently, however, this has not been the case.

“It’s just been busy for the last 12 months — the last two years, really,” she said. “There has been no slowdown — there’s just no inventory.”

The pandemic has complicated not only real estate inventory, but also open houses. “It was weird at first,” Agron said. “In the past, there weren’t as many people trying to go to an open house. Now there’s 10 or 20 buyers coming in — we’re trying to space people out more.”

She added that houses whose asking prices are less than $1 million attract the most potential buyers at open houses. Higher-priced homes generally draw a smaller, more specific crowd. But inventory is low at all prices.

Additionally, Argon said that most closings — which once always took place in person — are now being done remotely, a major change in the industry.

What is happening in Bellmore-Merrick is happening all along the South Shore. Real estate agent Michael Sherack, who works in 60 communities across Long Island, said, “There seems to be an insane amount of demand for houses on Long Island, and there’s not enough inventory.”

Guilio Ferrante, an agent with Signature Premier Properties in Wantagh, added that the market is becoming increasingly competitive, creating bidding wars. “It’s frustrating, and I feel sad for buyers looking for their dream home,” Ferrante said. “Nine times out of 10, they’ll get outbid.”

Agron said that, unfortunately, there seems to be no end in sight to the high prices. “I don’t think that anyone can project when this is going to end,” she said. “In realty, really no one knows when things will change.”

Maria Cestero contributed to this story.