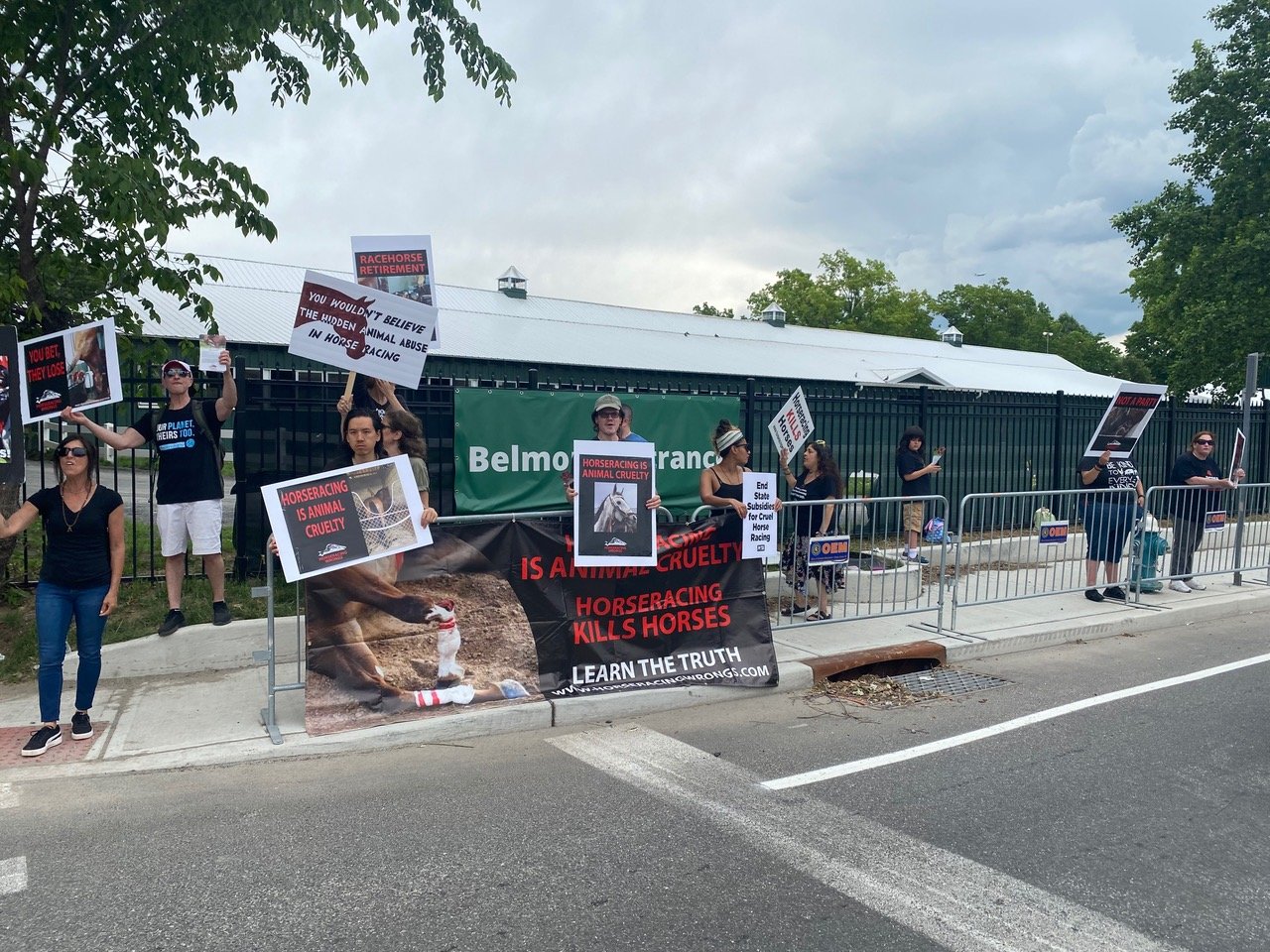 Over 100 animal rights activists chanted and held signs outside Belmont Park for three hours prior to the Belmont Stakes.
Robert Traverso/Herald

Chants of “Belmont Park has blood on its hands” and “horses die on racing tracks” rang out along Hempstead Turnpike in front of Belmont Park before the annual Belmont Stakes on June 11.

Members of Humane Long Island (HLI), a nonprofit that works to expand the rights of animals, and over 100 other advocates for animals protested for three hours outside Belmont Park before the annual horseracing competition began.

“It’s wonderful to see all of the support from Long Islanders who are here speaking out against how many horses have died on this racetrack this year and in years past,” said John DiLeonardo, a Malverne native and HLI founder and president.

According to information obtained through the Freedom of Information Act by the nonprofit Horseracing Wrongs, 50 horses have died per year over the past three years at Belmont Park, and 27 have died already this year.

DiLeonardo said animal rights activists believe horses are forced to race when they are too young and have underdeveloped bones, are drugged to run through injuries, and then when they are injured and unable to run quickly, they are killed. Even the winners of races such as the Belmont Stakes, he said, are often sent to slaughterhouses once they cannot compete.

“It’s a horrific industry that does not care about the horses,” DiLeonardo said. “These horses are literally dying to win, and if you care about animal welfare you should oppose the Belmont Stakes,” he added.

Kathy Guillermo, the senior vice president of People for the Ethical Treatment of Animals (PETA) who leads the organization’s efforts to end horseracing, said there have likely been more horse deaths at Belmont Park this year that the public has not been told about.

“This is not all about beautiful horses, cocktails and parties; this is about drugging, and broken legs, and auctions and slaughterhouses,” she added.

The protest on June 11 was launched partially in response to a victory won by animal rights activists against horseracing in New York State.

Earlier this month, New York State legislators decline to move toward passage a bill that would provide the New York Racing Association (NYRA), which runs Belmont Park, with $450 million in state-backed bonds to build a new clubhouse at the park.

A statement released by HLI in response to the legislation being stalled cites a 2021 Marist Poll survey that found that 91% of New Yorkers did not plan to visit a state racetrack and bet on horse racing that year while 5% planned to go once, and 1% planned to go twice. “Residents of New York, not the 11 privately owned Thoroughbred and harness tracks, should be the recipients of subsidies,” the statement reads.

Although this victory was celebrated by those in attendance, the protest mainly aimed to raise concerns about horseracing as an industry.

“This is not a sport like it’s been called for the past 150 years,” said Patrick Battuello, the president and founder of Horseracing Wrongs. “In fact, it’s animal exploitation, animal cruelty and animal killing,” Battuello added.

While six horses die at U.S. tracks per day, and 2,000 die per year, according to documents obtained by Horseracing Wrongs from state horse racing commissions, Battuello pointed to other factors of the day-to-day treatment of racehorses as evidence of mistreatment.

The average racehorse, he said, is locked in a tiny 12-foot by 12-foot stall for over 23 hours per day. “That’s a cruelty being inflicted on naturally social animals,” he said, adding that the physical and mental abuse is evident in the constant swaying, excessive kicking, and even self-mutilation of confined horses. “These horses are suffering every day,” Battuello added.

Battuello contrasted the treatment of horses with the treatment of dogs, pointing out how whipping horses in public view is acceptable at horseracing events. “If you did that to a dog in the park you’d be arrested for animal cruelty; at the racetrack, it’s all just part of the tradition,” he said.

“It’s a justice and moral issue that society has been sort of pretending isn’t there,” said Lisa Kahn, an animal liberationist who traveled from New Jersey to the protest at Belmont Park, of animal rights issues, which she said manifest as human domination over species unable to speak out on their own behalf. “We’re animal liberationists – we just want animals to be left alone,” she added.