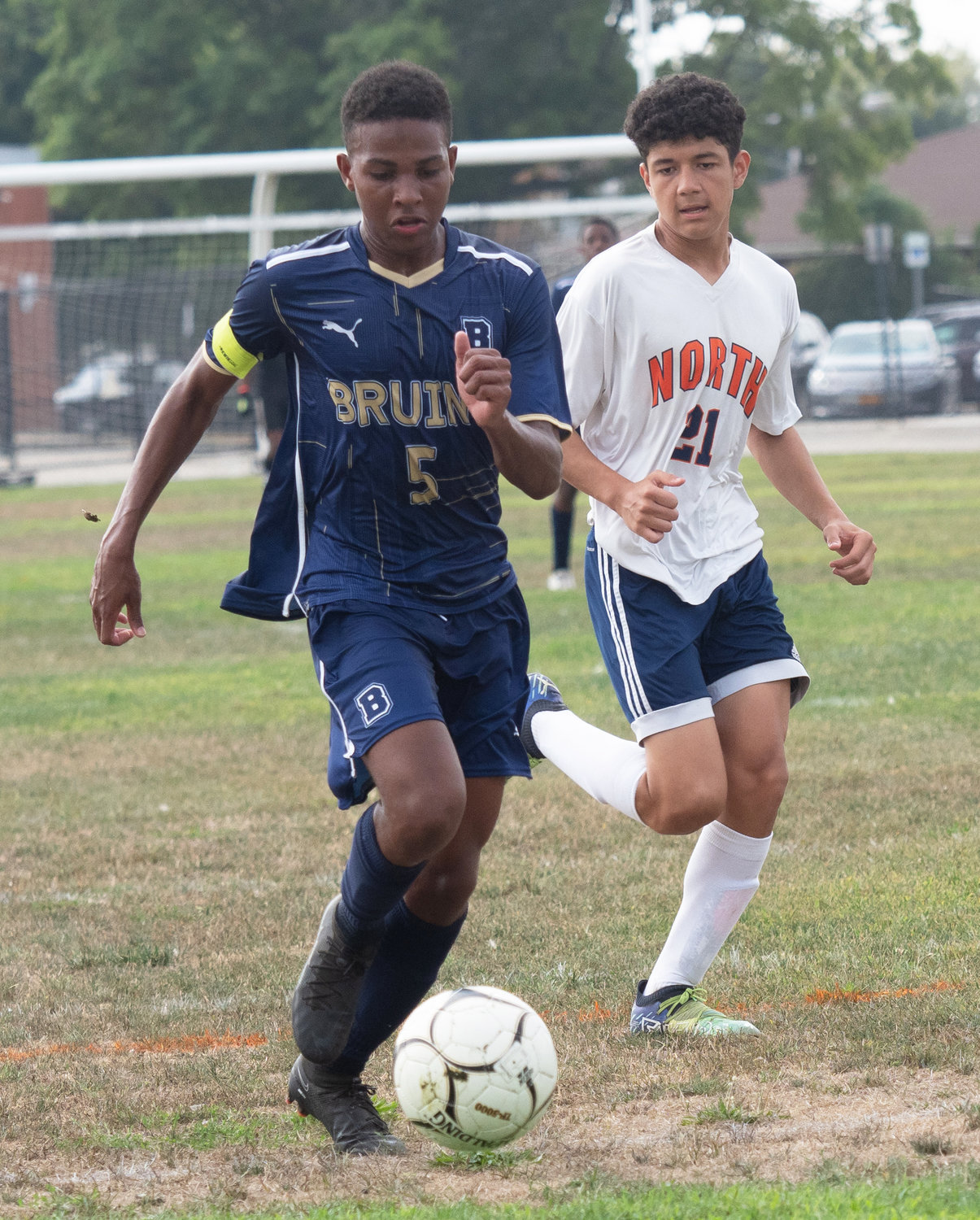 Justin Jean-Louis, left, had a clutch goal and an assist for the Bruins in their feel-good 2-1 victory over Syosset on Sept. 28.
Eric Dunetz/Herald
By Brian Kacharaba

There are few things sweeter in sports than beating a team that eliminated you from the playoffs the year before, especially in dramatic fashion on their home field.

Biverly Brutus scored the game-winning goal with 18 seconds left and Josue Ascencio-Cueva made four saves and prevented a defensive disaster at the final horn as the Baldwin boys’ soccer team continued their strong start with a 2-1 win at Syosset on Sept. 28.

Justin Jean-Louis tied the game early in the second half and William Zelaya assisted on both goals for the Bruins, who avenged last year’s 1-0 home playoff loss to the eighth-seeded Braves last October. Baldwin was the top seed in that quarterfinal matchup and carried an 13-game unbeaten streak (9-0-4) into the contest.

“Anytime you win a game with [18] seconds left is a crazy feeling and to do it against a team that knocked you out last year really says something,” coach Chris Soupios said.

It was Baldwin’s third straight win after suffering a 2-0 loss to Port Washington on Sept. 20. The Bruins’ fifth one-goal victory of 2022 pushed their overall record to 7-1-1 and 6-1-1 in Conference AA1.

On the winning goal, Zelaya helped break up a Syosset possession just inside the Bruins’ zone before receiving a pass from Jean-Louis at the Syosset 40-yard line. Zelaya dribbled 25 yards before passing the ball through three Brave defenders to Brutus, who beat the goalkeeper to the left side from the football goal line.

“It was the moment Will got the ball going at them with speed and then he made the quick move, which draws two more players towards him and to see out of the corner of his eye that hole was amazing,” Soupios said.

In a desperate attempt to tie the game, a Syosset midfielder booted a long shot from his own 40 to the Baldwin 5. A Bruin defender tried to head the ball out of harm’s way, but it instead arced towards the Baldwin goal, where Ascencio-Cueva had to run back and tip it over the crossbar to perverse the heart-stopping win.

All three of Brutus’ points (2 goals, 1 assist) have come in the three-game stretch culminating with the Syosset contest, but Soupios said his contributions this season goes beyond the scoresheet.

“Biverly isn’t seen for the hard work that he does,” Soupios said. “He’s a big body for us up front, we asked a lot of him on the field as far as pressing and pushing the other team on the ball. I feel like Biverly has bought into his role.”

The Bruins, unfortunately, had a late rally fall short two days later in a 3-0 loss to Hempstead. Abiel Cervanes and Zelaya scored their third goals of the season in the last three minutes for the Bruins, who still remain in the hunt for a second straight conference crown with four games left at press time.

Senior Benjamin Hernandez leads the team with five goals and seven points and Jean-Louis also has three tallies this season.