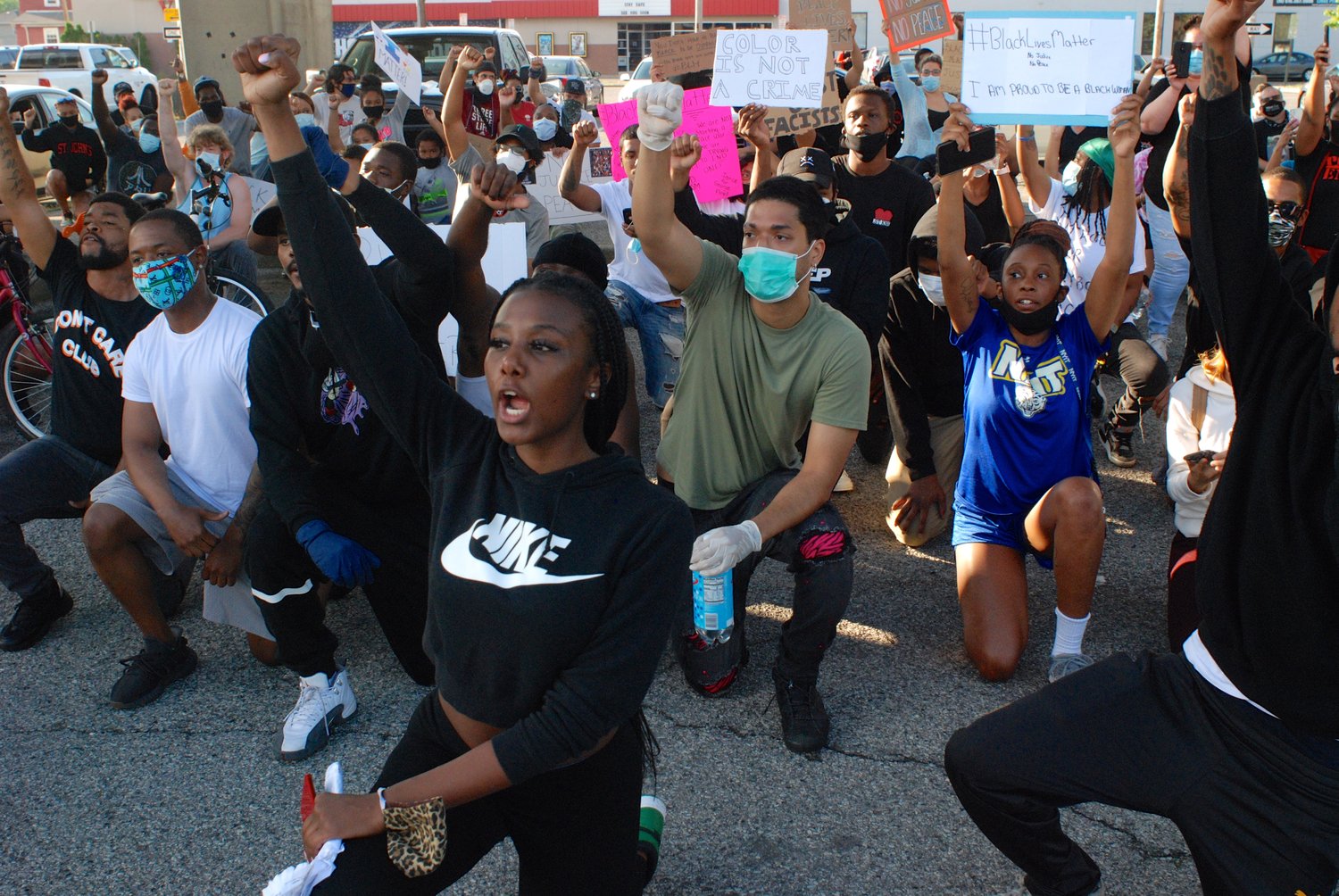 Protesters assembled at the Merrick Long Island Rail Road station and prepared to march. Within minutes, they had shut down Sunrise Highway west of the station. At front was Adriana Brutus, 20, of Elmont. "I'm scared every time I come outside," she said, crying.
Scott Brinton/Herald 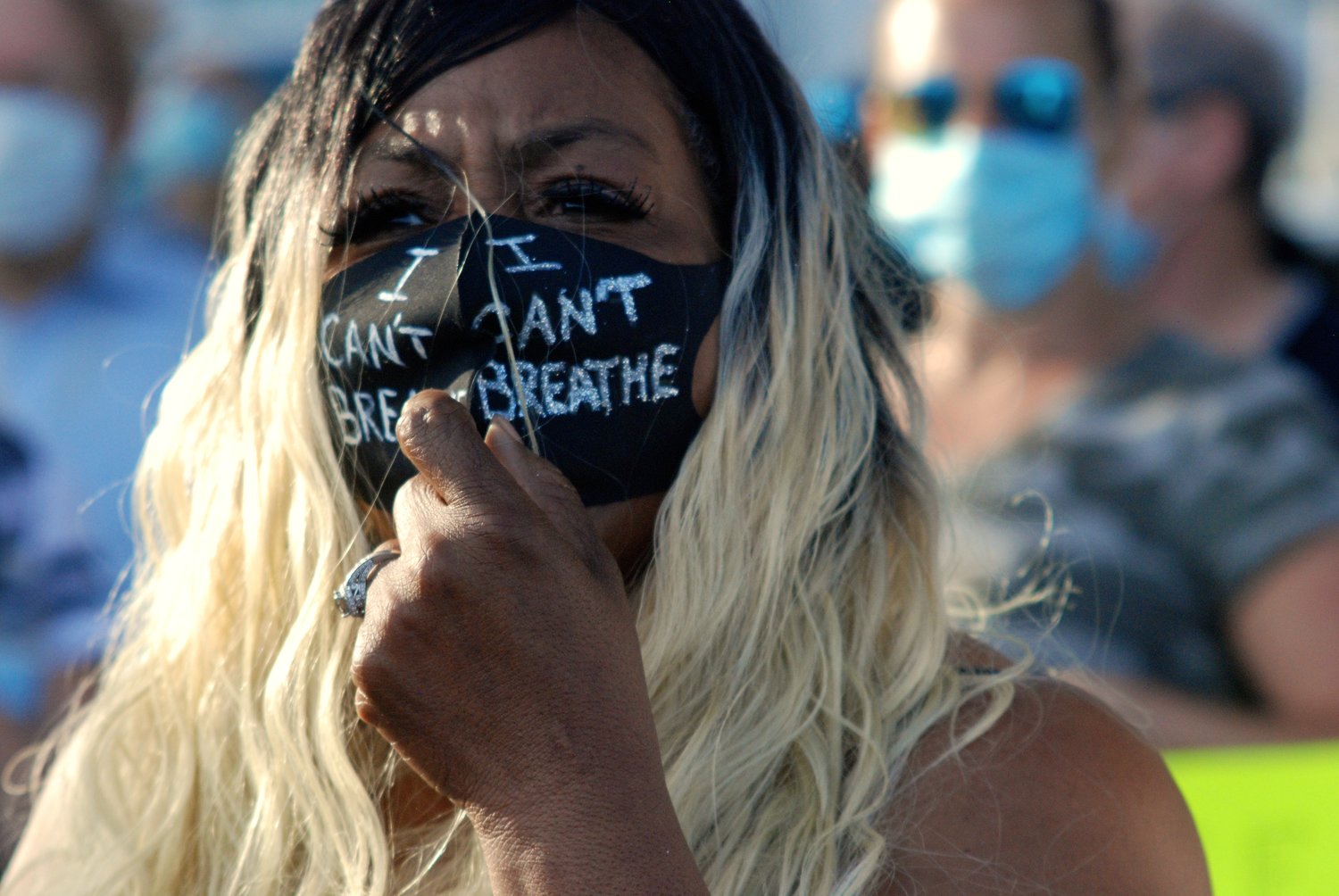 Rita Moore, of Lindenhurst, who grew in Wyandanch, raised protesters' spirits with an impassioned speech at the train station.
Scott Brinton/Herald 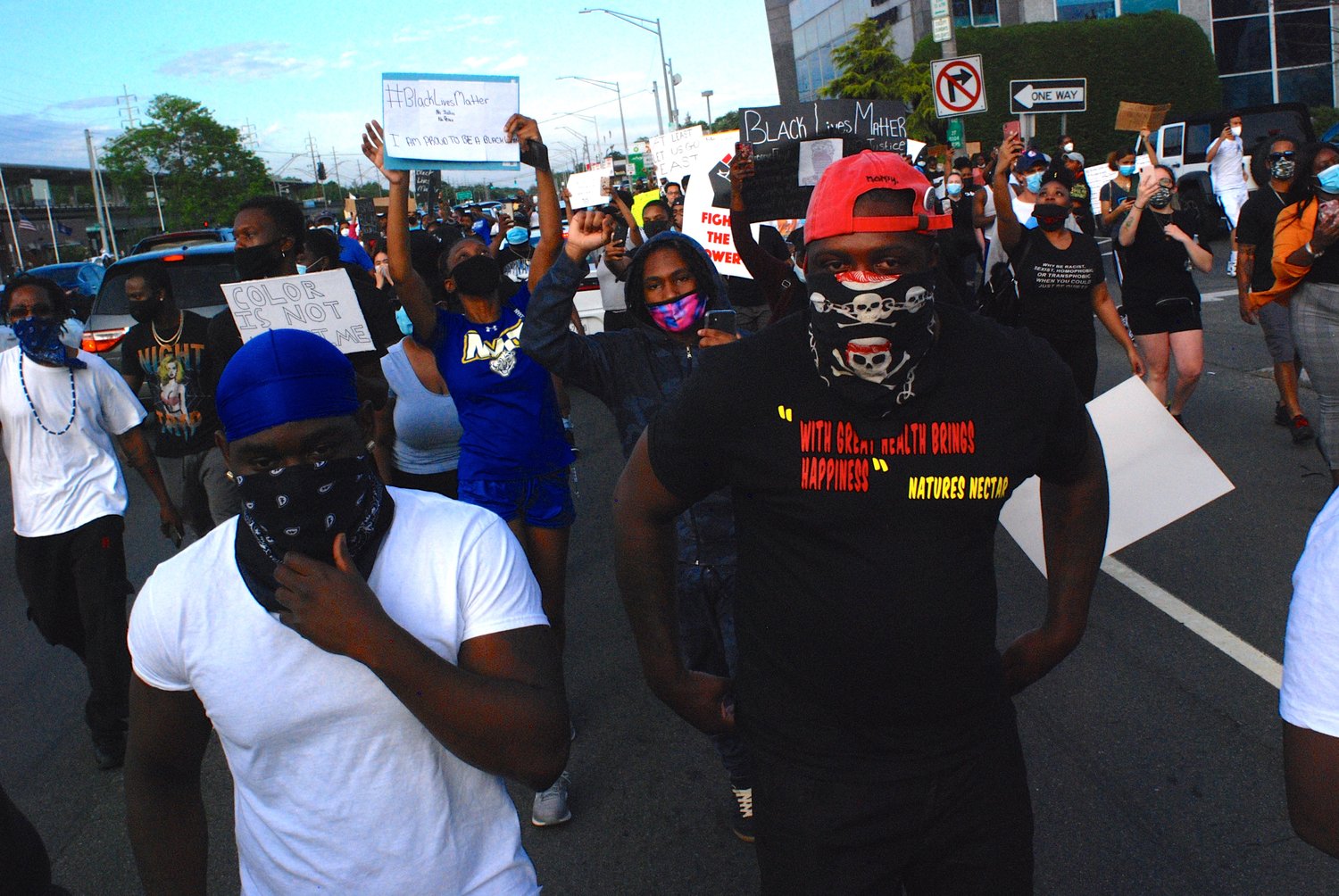 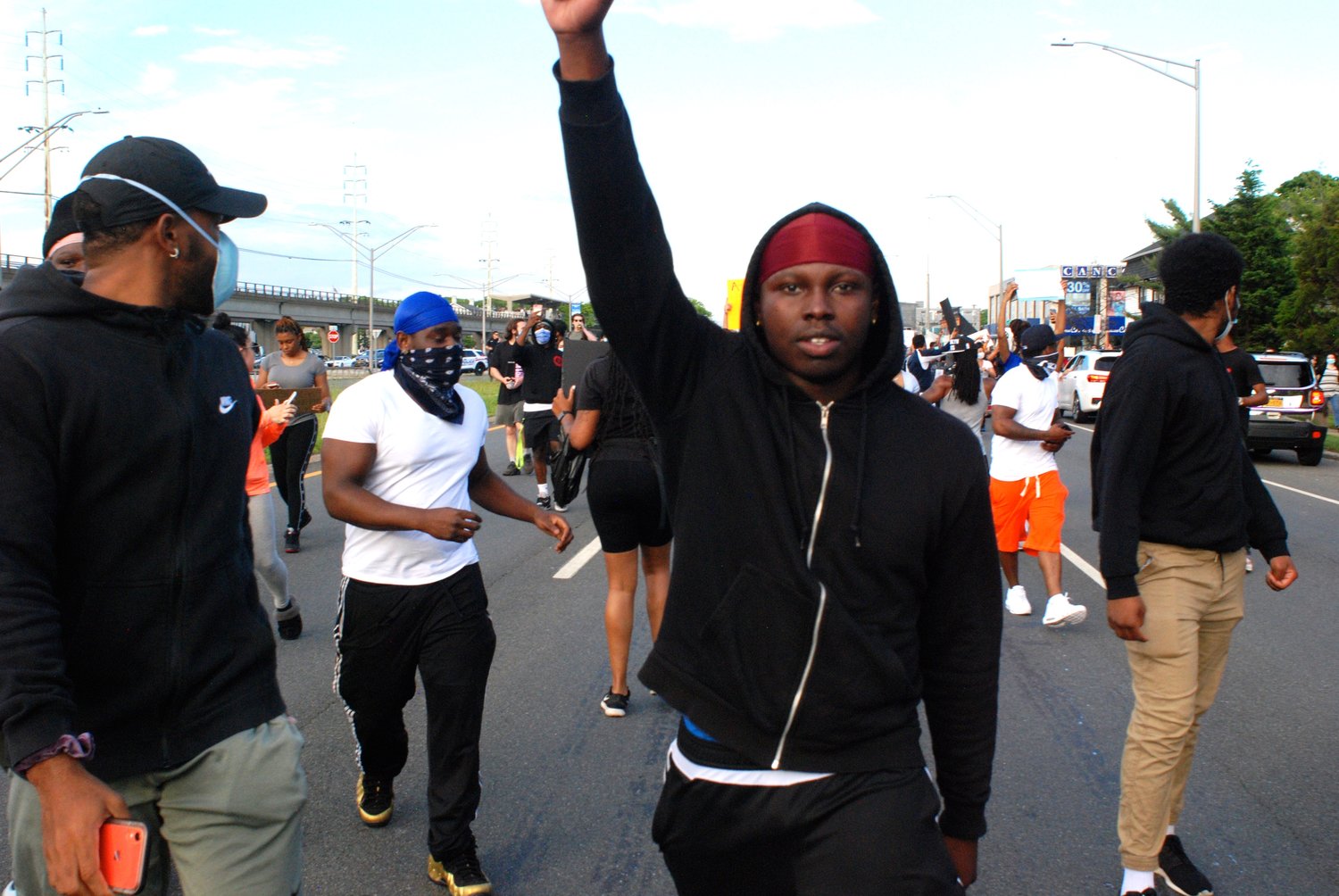 Many demonstrators marched with their arms held high.
Scott Brinton/Herald 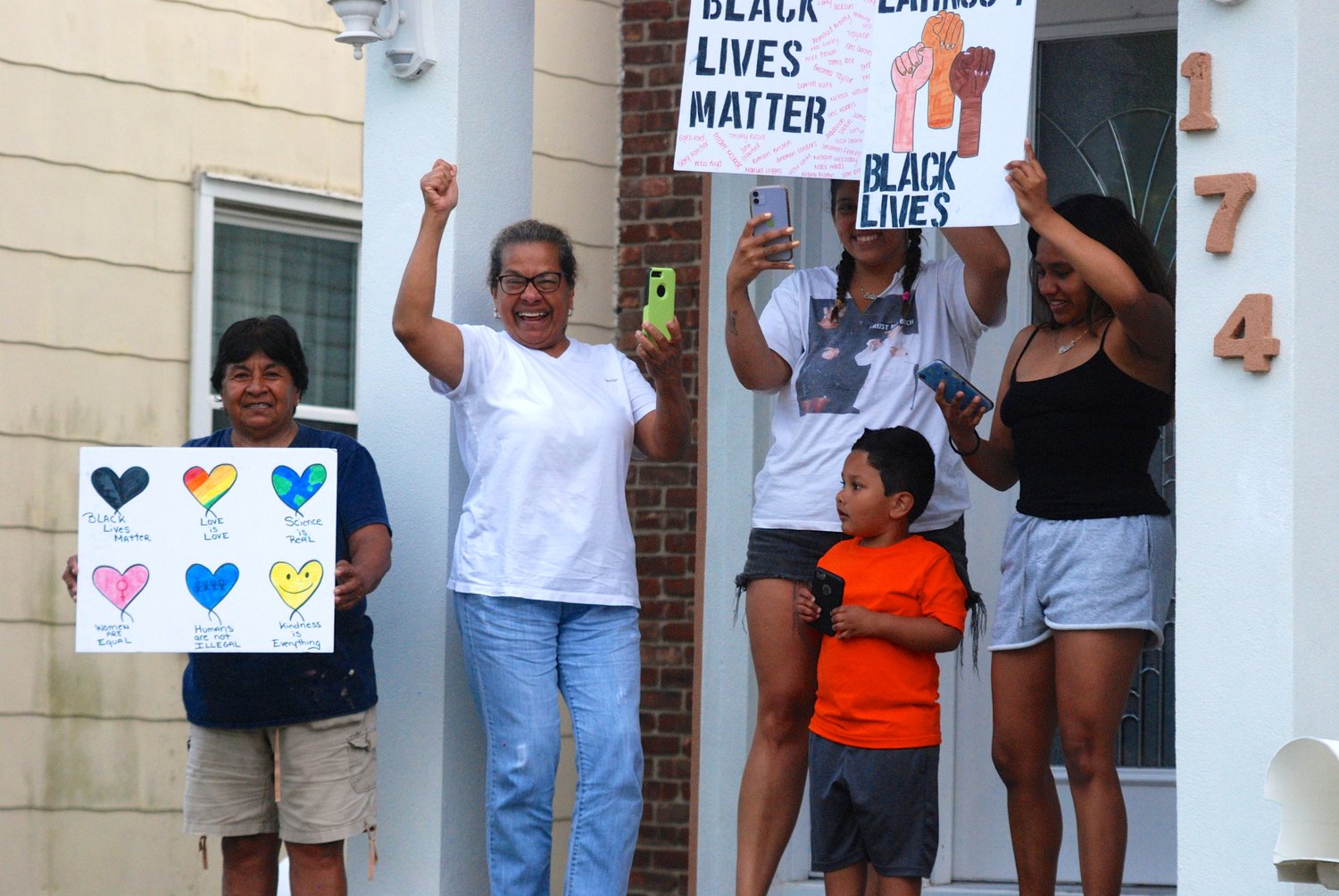 The Cordova family, on Babylon Turnpike in Merrick, cheered on the protesters.
Scott Brinton/Herald 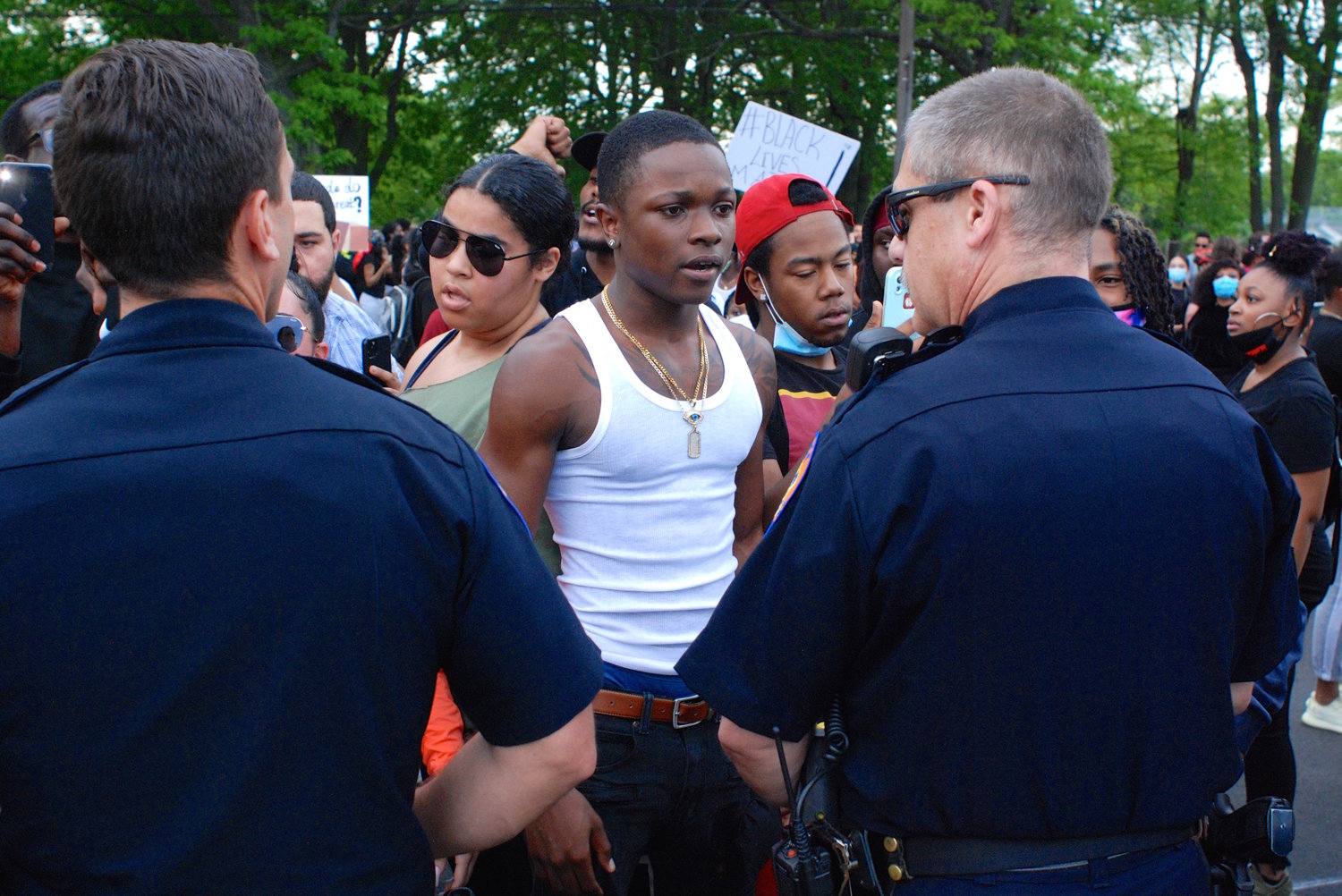 Protesters were in tight quarters with police, but the demonstration remained peaceful throughout.
Scott Brinton/Herald 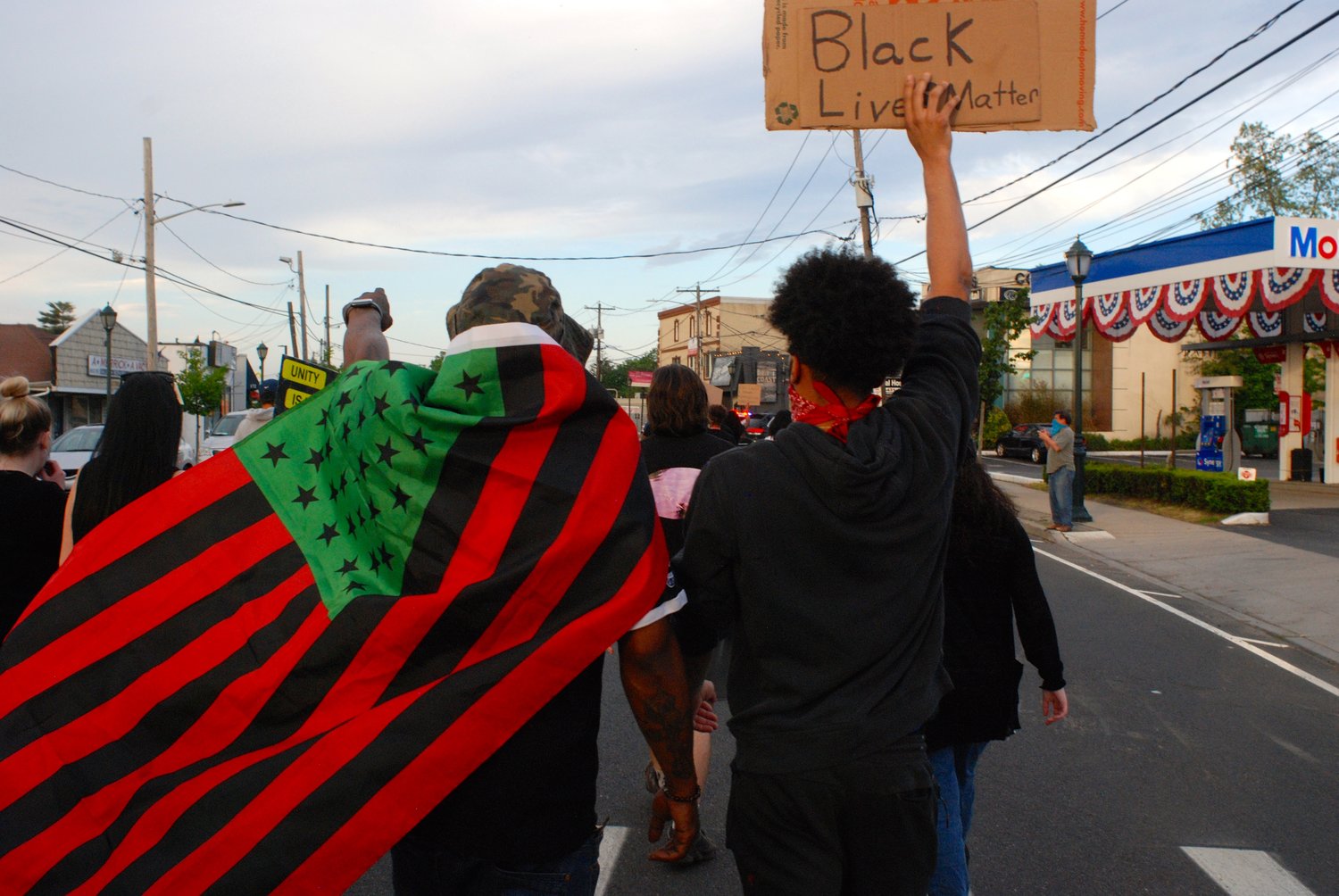 Marching on Merrick Road, at the site where only a day earlier a group of 30 counter-protesters had tried to stop Black Lives Matter protesters from demonstrating on the sidewalk.
Scott Brinton/Herald 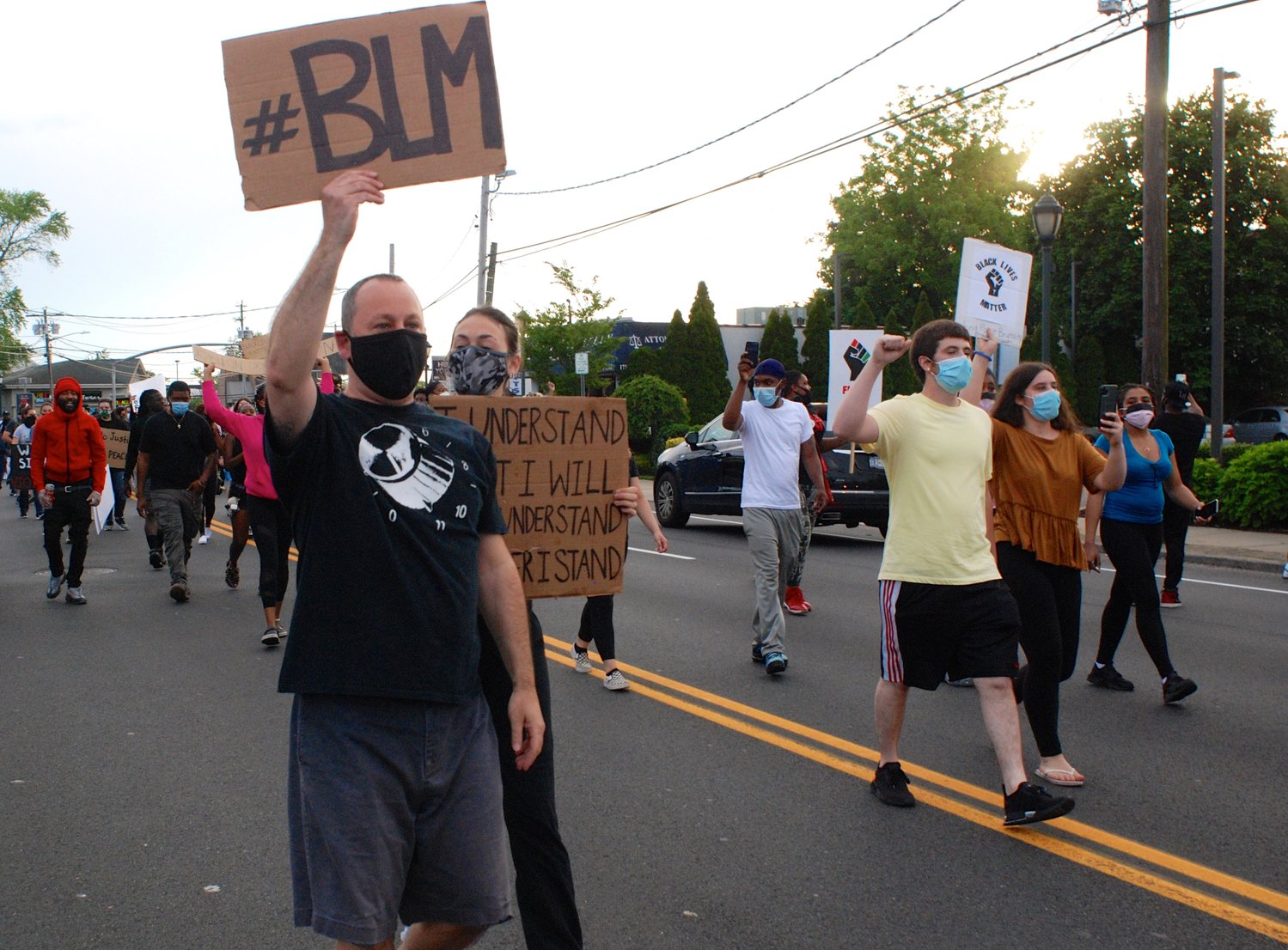 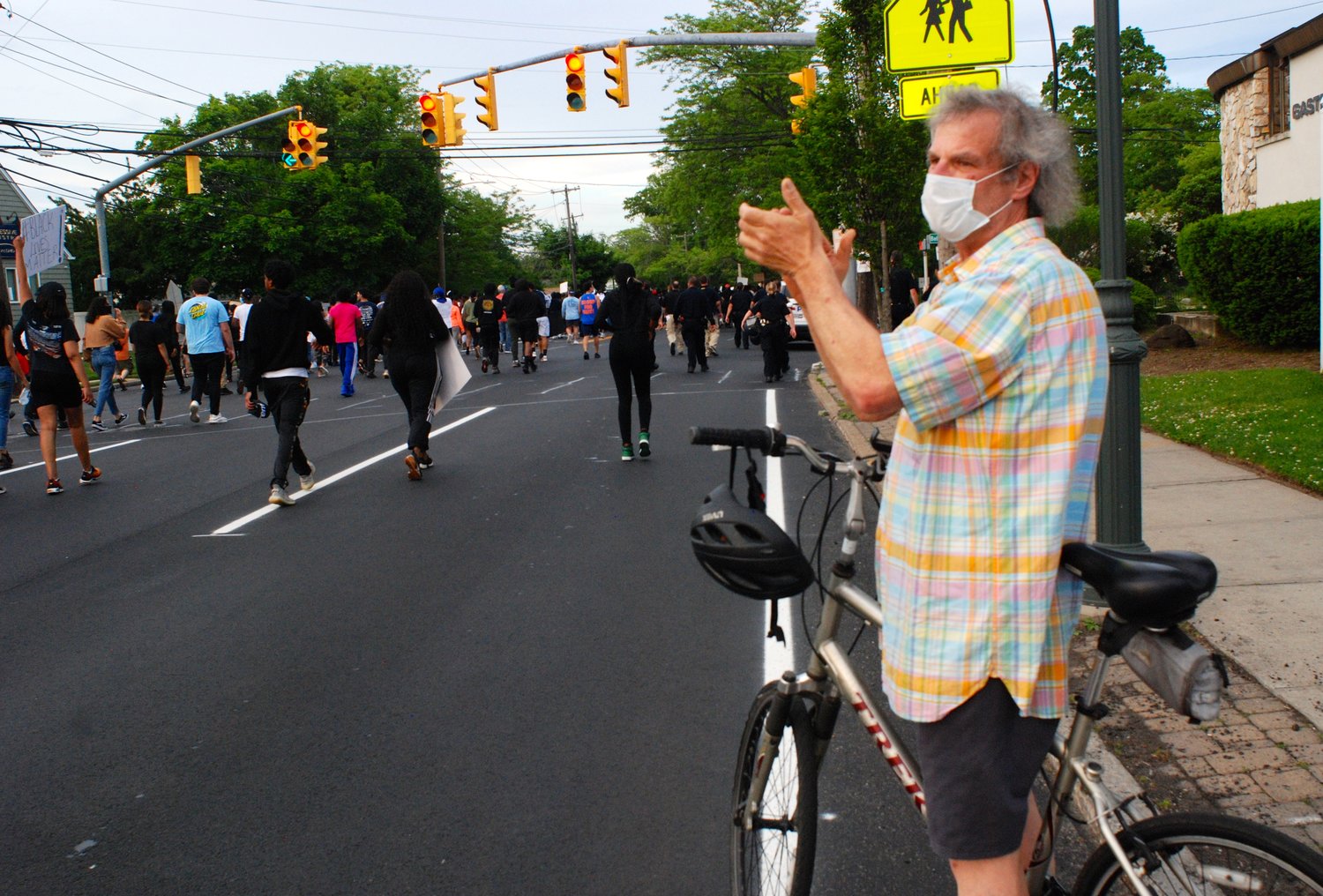 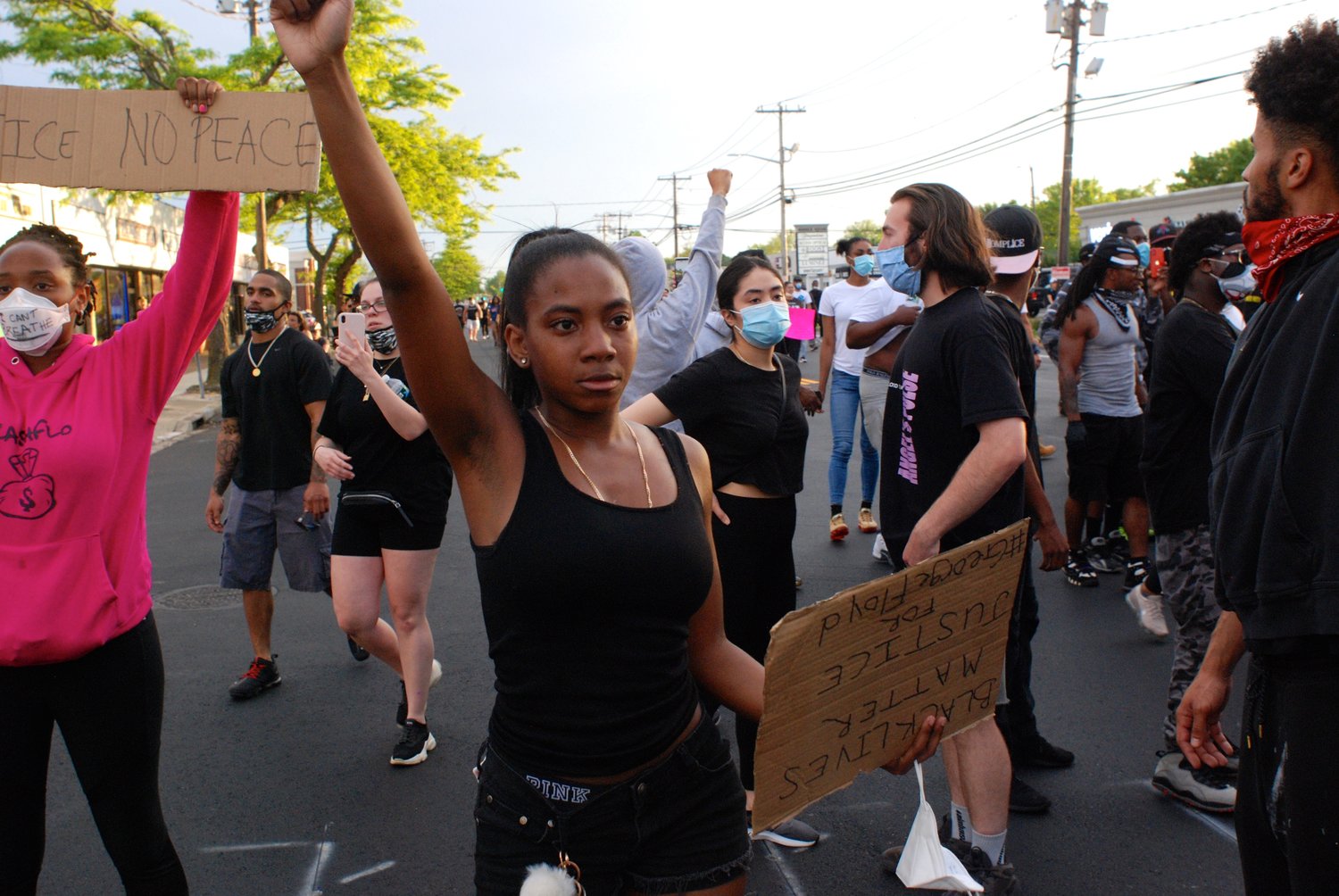 Stopping for a moment on Merrick Road in Merrick.
Scott Brinton/Herald 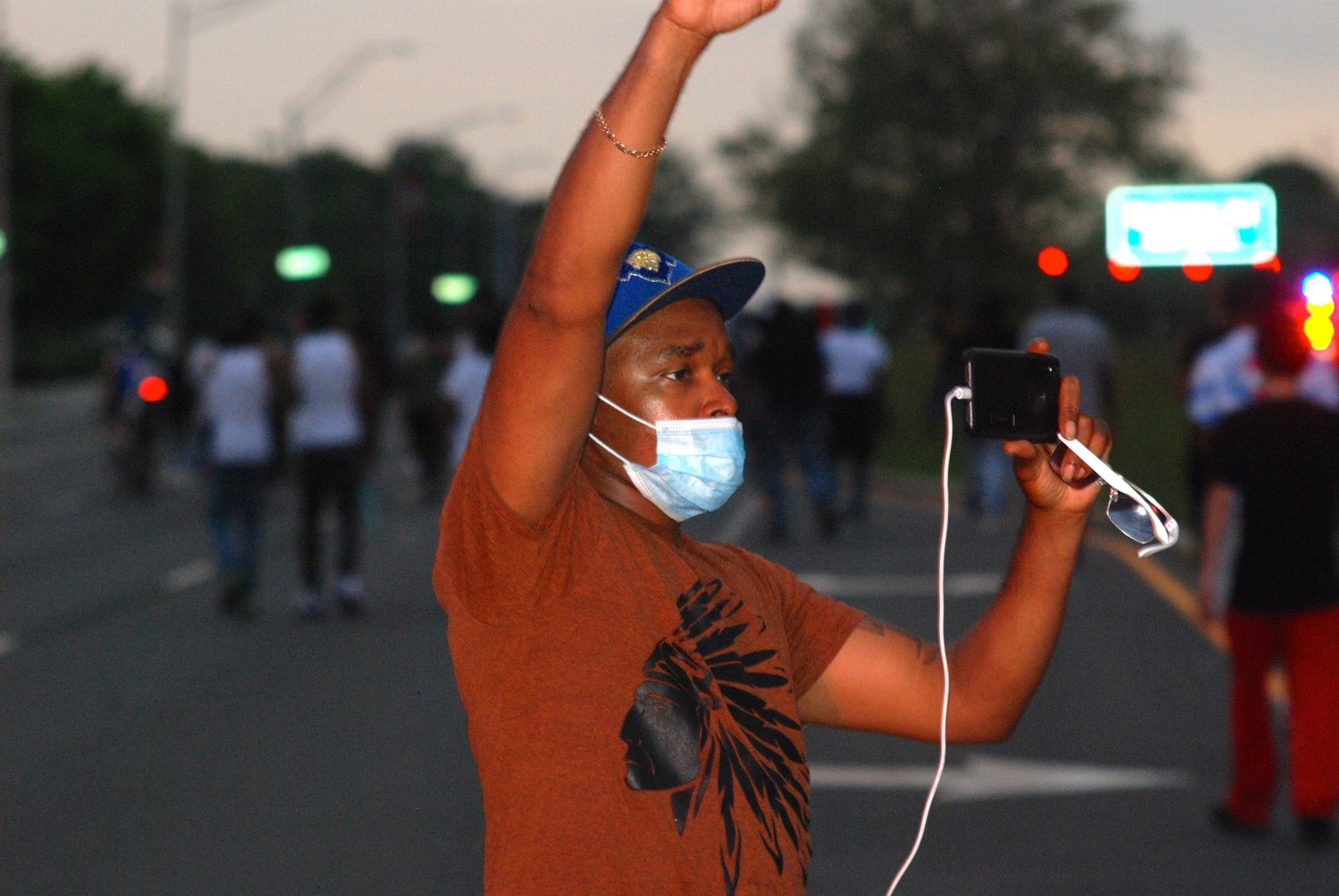 Marcus Brown, from Uniondale, on Sunrise Highway in Bellmore, as the sun was setting.
Scott Brinton/Herald
Previous Next

Thousands turned out for a Black Lives Matter protest in Merrick and Bellmore Wednesday, and Heralds Executive Editor Scott Brinton followed the protesters as they made their way from Merrick to Bellmore and then back to the Merrick Long Island Rail Road station, where they had begun.

No video encapsulated the day more than a 15-second clip of little Wynta-Amor Rogers chanting with the protesters.  By midnight, the video had been viewed more than a million times on Twitter, and counting.

As one Twitter follower, @MyBlackIsBeautiful, remarked, "This video brings a smile to my heart and tear to my eye."

The protesters traversed more than six miles, remaining peaceful throughout, shouting, "Hands up, don't shoot," "White silence is violence" and, like Wynta-Amor, "No justice, no peace."

For all of Brinton's videos, live-tweeted throughout the evening, check out the Long Island Instagram page here.

At the same time, Brinton photographed the protest throughout, and his images are found above.

A pizzeria on Merrick Road in Merrick had a window broken; beyond that, no other damage had been reported at press time.

As the protesters walked past, the counter-protesters continued to scream at them. The march, however, ended peacefully.

At the Wednesday protest, a number of Merrick residents disavowed the behavior of the 30 or so counter-protesters.

Matt Brutus, 24, of Elmont, was joined at the protest by his sister, Adriana, 21. He said he wants predominately white communities like Merrick to understand how hard it is for young African-Americans to move outside their neighborhoods.

"I have yet to see someone make it out of Wyandach," he said, referring to the majority African-American community in Suffolk County. "We can't buy property. They redline us. They say you have to go to school here."

Also among the protesters was Kevin Trujillo, 22, of Freeport, who recently graduated with honors from Lehman College at the City University of New York with a degree in political science and philosophy. "I think what's going on is a lot of polarization," he said. "At the end of the day, we're supposed to be one."