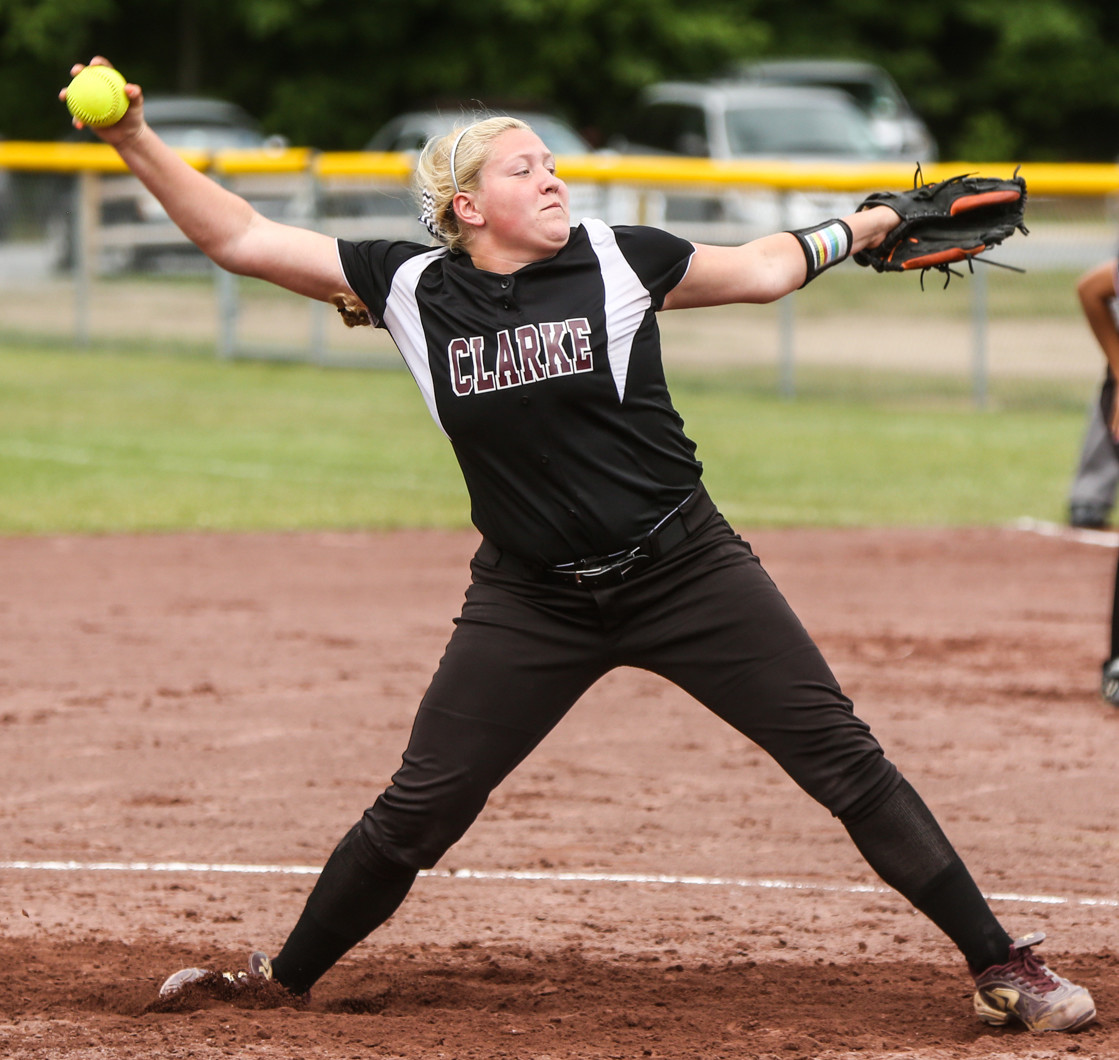 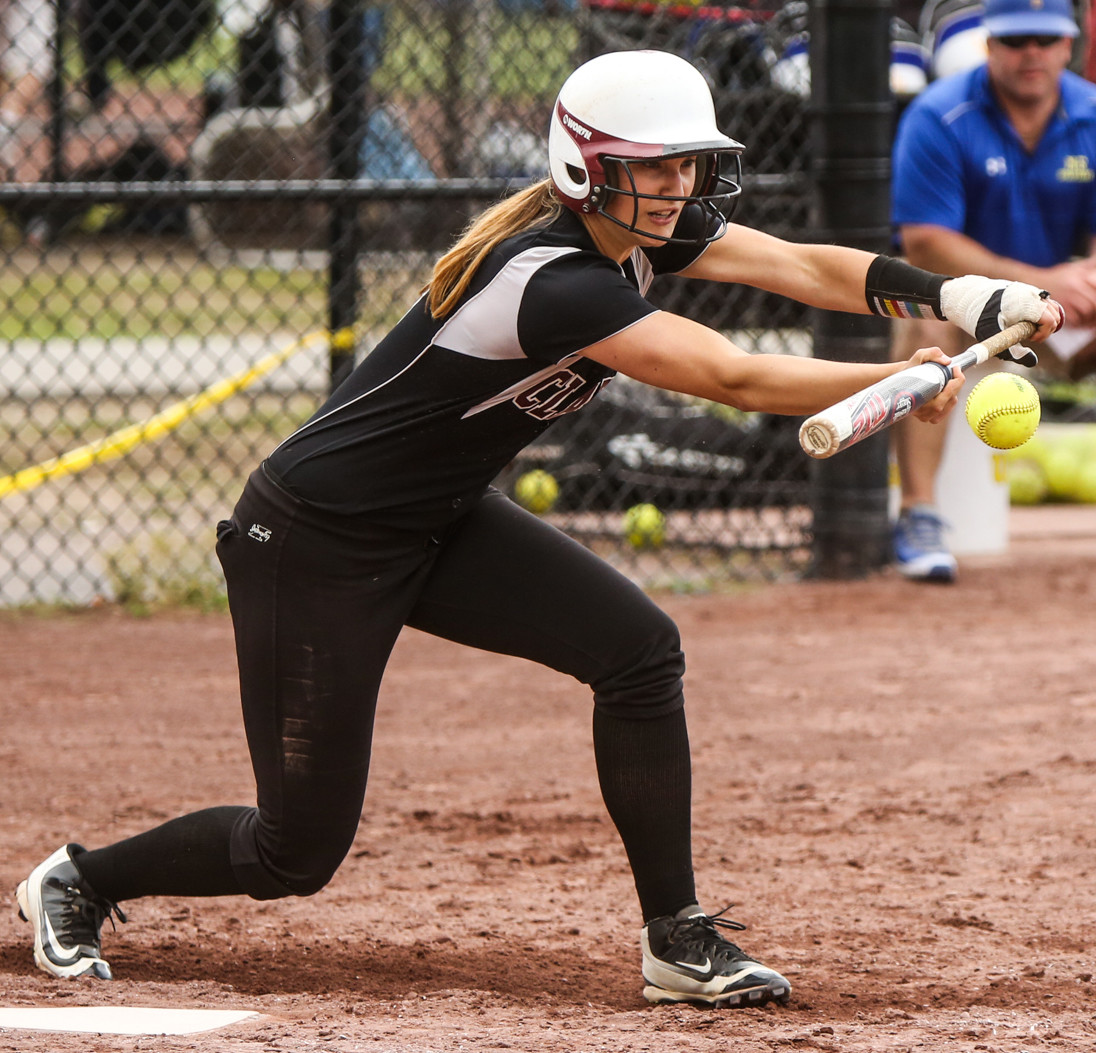 Clarke’s Brooke Scherer, limited by a broken thumb suffered in the Nassau County finals against Carey, had a bunt single and scored in the fourth inning of the state Class A championship game.
Nick Serrata/Herald
By Tony Bellissimo

The bus ride back to Clarke High School from Glens Falls last Sunday afternoon without the New York State Class A softball championship plaque in tow was difficult on the Lady Rams, who for a second straight year came within outs of bringing home the crown.

Clarke lost a nail-biter, 6-5, to Maine-Endwell, in the title game at Moreau Park, a day after waiting through a four-hour weather delay before defeating Troy, 8-2, in the semifinals.

“The first 45 minutes after it ended were tough,” Clarke coach Rachel Barry said. “Everyone was just upset. I don’t think we’ll ever get over it, but it eventually turned into the typical singing Clarke softball bus ride.”

Clarke, which fell short against Averill Park in extra innings in last year’s state final, finished 18-4 this spring and repeated as Nassau and Long Island champions. Seven full-time starters keyed a two-year run that saw the team win 41 of 49 games, including 16 playoff victories.

“The chemistry these girls had was beyond any you’ll ever come across,” Barry said. “They really put Clarke softball on the map.”

The driving force behind the Lady Rams, senior pitcher Sarah Cornell, completed an extraordinary six-year varsity career and will be in the circle for Hofstra University next spring. Cornell is Long Island’s all-time strikeout leader with 1,345 and ranks tied for fifth on the state’s all-time list. She tossed 29 shutouts, nine no-hitters, one perfect game, and allowed an average of barely a run per game. “She had an incredible career,” Barry said.

Against Troy last Saturday, Cornell allowed just one hit and struck out 13. She whiffed the first six batters she faced and also had two RBIs, along with Sabrina Caputo and Victoria Sferrazza.

Usually, the state semifinals and final are played on the same day, but because Clarke’s semifinal began at 5:30 p.m. instead of 1:30, the championship game was postponed until Sunday at 10 a.m. “We played a great semifinal, and an extra night in the hotel with everyone was 100 percent worth it,” Barry said.

Clarke dug a 3-0 hole against Maine-Endwell in the title game but rallied to take a 4-3 lead. Cornell hit a two-run double in the third, and senior catcher Brooke Scherer, who played through a broken thumb suffered in the Nassau finals against Carey, led off the fourth with a bunt single and scored on Kirstin Cox’s sacrifice fly.

After Maine-Endwell tied it, Caputo hit a leadoff triple in the bottom of the fifth and scored on Ally Koustagiannis’ grounder to give Clarke back the lead at 5-4. However, a two-run double by Mikayla Garbarino in the top of the sixth won it for the Lady Spartans.

“We knew we had what it takes to get back to states,” Barry said. “The letdown is bigger than last year. We did a lot of great things. We went through this journey together and everyone was all-in until the last out.”