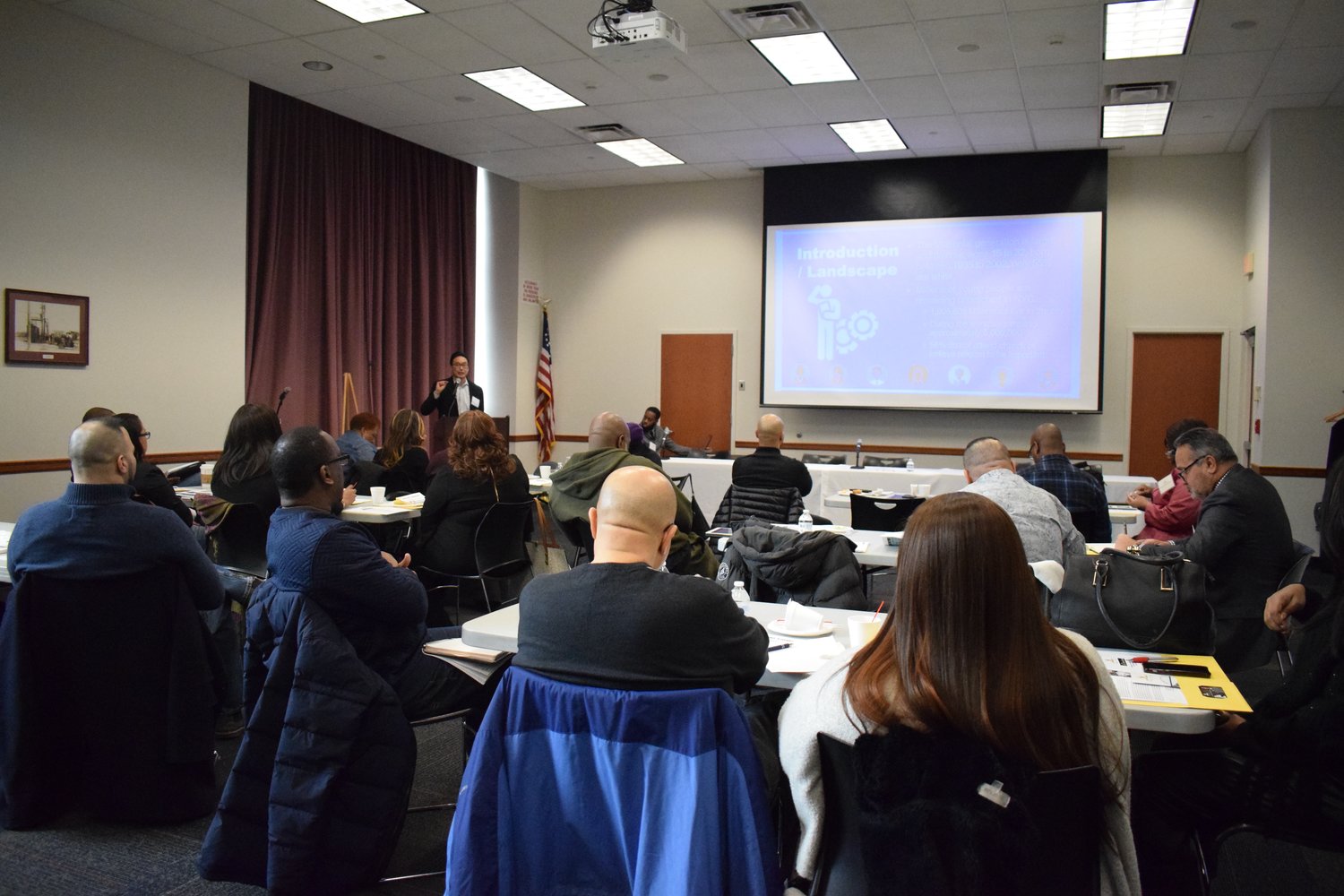 More than two dozen residents and community leaders discussed how to groom millennials to become local leaders during the “Roundtable on Reaching, Engaging and Retaining Millennials” at Elmont Memorial Library on Jan. 19.
Ronny Reyes 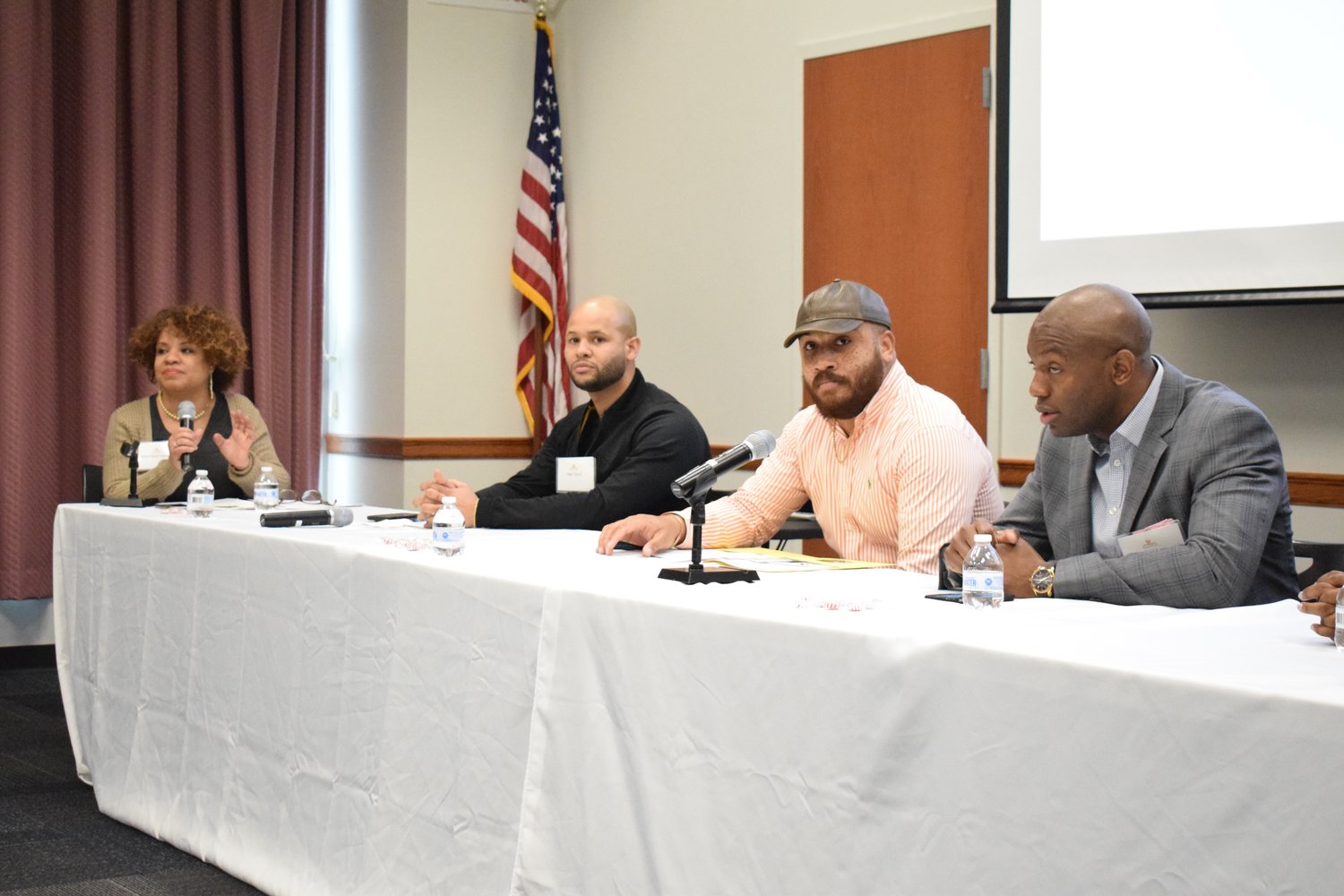 Mimi Pierre-Johnson, left, led a pannel of millennials who gave their perspectives on youth engagement. From the left were Dan Lloyd, Pastor Justin Greaves and Leonard lans.
Ronny Reyes
Previous Next
Workplace perceptions of millennials

According to the most recent report by the Pew Research Center, those born between 1981 and 1996 are classified as millennials. While millennials are often pegged as lazy and uninformed, about 35 percent took part in the U.S. workforce in 2016 and, at 56 million, represented the largest generation in the labor force. That figure is expected to grow in 2019.

How millennials see themselves:

•Sixty-five percent say they are people-savvy.

•Thirty-five percent say they are tech-savvy.

•Eighty-two percent say they are loyal to their employers.

•Eighty-six percent say they are hardworking.

•Fourteen percent say they are fun-loving.

•One percent believe millennials are loyal to their employers.

Dozens of people gathered at the Elmont Memorial Library on Jan. 19 as two groups, the Elmont Cultural Center and Bridge to Promise, hosted a roundtable on how to reach and engage millennials in the community and keep them in the area.

Cultural Center founder Mimi Pierre-Johnson said that she teamed up with the Long Island-based nonprofit Bridge to Promise — which focuses on teaching young adults social and life skills — to brainstorm ideas to encourage and support the next generation of Elmont leaders.

“What’s going to happen to our work and our communities when we’re all gone if we don’t prepare our youth?” Pierre-Johnson said.

According to Data USA, which tracks demographics for cities across the U.S., the average age in Elmont was 38 in 2016. Millennials, who were 18 to 34 at the time, represented 22 percent of the local population.

Al Miyashita, of the youth-engagement group Navigators NYC, spoke at the millennial roundtable. Millennials, who make up nearly a third of the U.S. population, are more diverse than previous generations. The Brookings Institute, a non-profit, non-partisan research group based in Washington, D.C., published a research paper in 2016 that indicated diversity is among the millennial generation’s defining traits. Compared to the baby boomers who are 75 percent white, millienials are 55 percent white.

Miyashita added that about 27 percent of millennials are self-employed, which shows they are entrepreneurial. Miyashita said that headlines in the past few years have described millennials as lazy and selfish, distoring this generation’s image and causing misunderstandings between millennials and their older counterparts.

“We makes these jokes about millennials,” Miyashita said. “We say they’re given participation trophies and don’t know how to work hard like we did, but they’re ambitious and more informed than previous generations, so we need to guide them and reach out to them through their platforms,” referring to social media.

Leonard Lans, 31, a senior manager for Verizon Wireless, agreed with Miyahsita. Lans founded his own company, Lans Inc., to inspire and lead millennial entrepreneurs in marketing and business development through modern technology. Lans said that while parents and community leaders need to understand millennials’ relationship with technology and help them avoid smart-phone addiction and improper internet use, they also need to teach by example.

“We’re no longer living in a ‘Do as I say, not as I do’ society,” Lans explained. “Parents who are on their phones, computers or iPads all day need to change, or their kids won’t listen to them.” Millenials are a “truth-verifying group,” so if they find you lying or acting like a hypocrite, you’ve lost them.”

Lans said millennials should be given responsibilities and leadership roles to help them learn and grow. Dan Lloyd, 32, founder of Millennial Minority Inc., a nonprofit public-policy advocacy group for young minorities in New York — echoed Lans, saying that millennials crave the chance to prove themselves to the older generations and should be spoken to as equals.

“We’re overloaded with information and trying to figure ourselves out while balancing our history and heritage,” Lloyd said. “We need baby boomers and gen-xers to guide us, and they’ll see that we also have things to teach them.”

Pierre-Johnson spoke of her daughter, Tamar Paoli. As Pierre-Johnson hosted her usual Haitian Saturday-morning radio show, Paoli showed her mother how to use Facebook Live to broadcast the show online. Not only was Pierre-Johnson able to connect with more listeners, but also she tracked how many people tuned in, so she knew who her audience was and what the listenership trend was throughout the month.

Miyashita said simply exposing millennials to new responsibilities and listening to them would foster trust between younger and older people. He added that the best way to reach millennials is through other millennials, and urged parents and community leaders not only to interact with their own children, but also to reach out to their communities’ youth to start conversations among millennials.

“This is a very important generation that we need to go after,” Miyashita said. “If we don’t engage with them, we’re going to lose them.”