East Meadow looks back on 18 years of unity, advocacy following 9/11 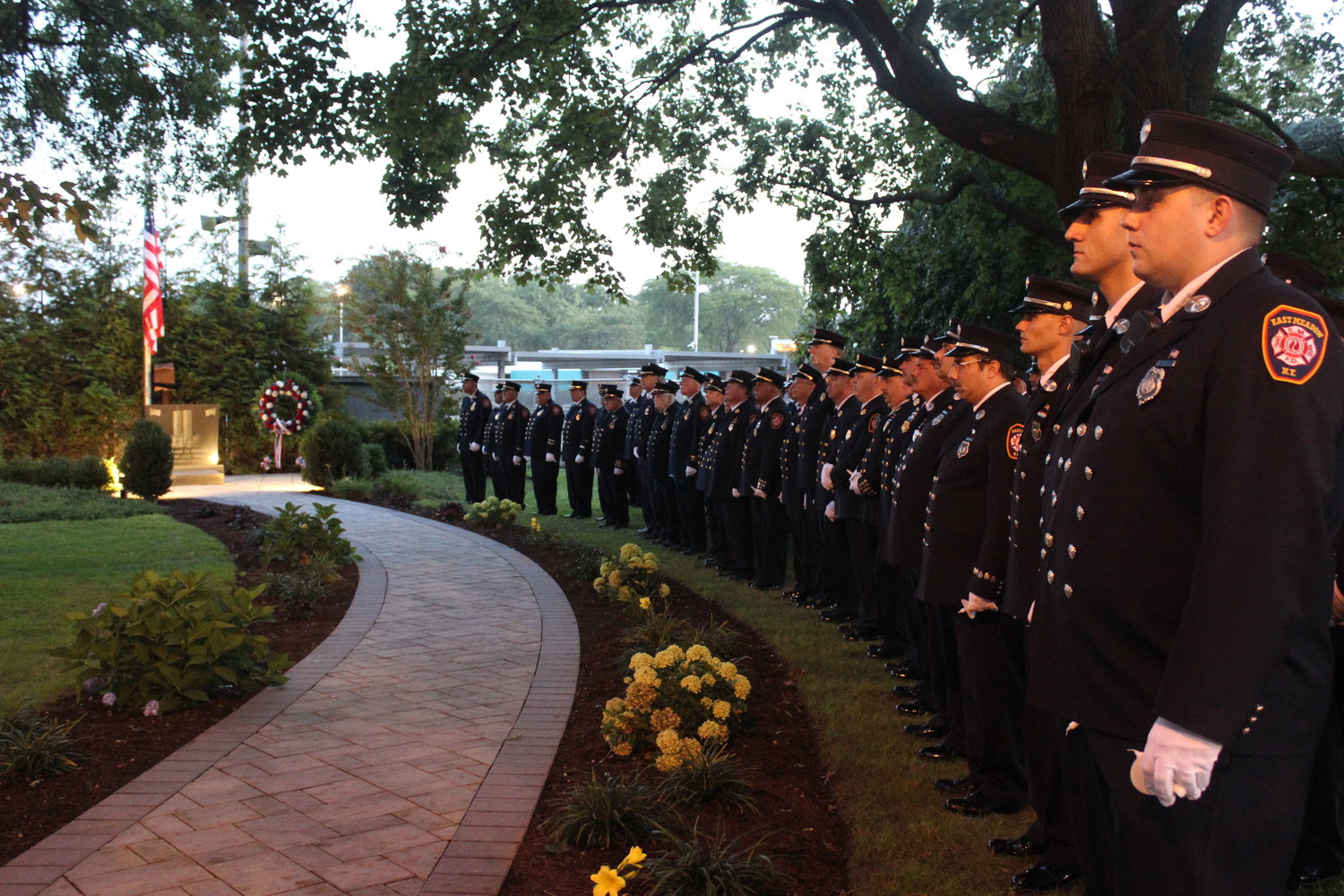 Members of the East Meadow Fire Department honored those who died in the Sept. 11 attacks at a ceremony at Veterans Memorial Park in East Meadow.
BRIAN STIEGLITZ/HERALD 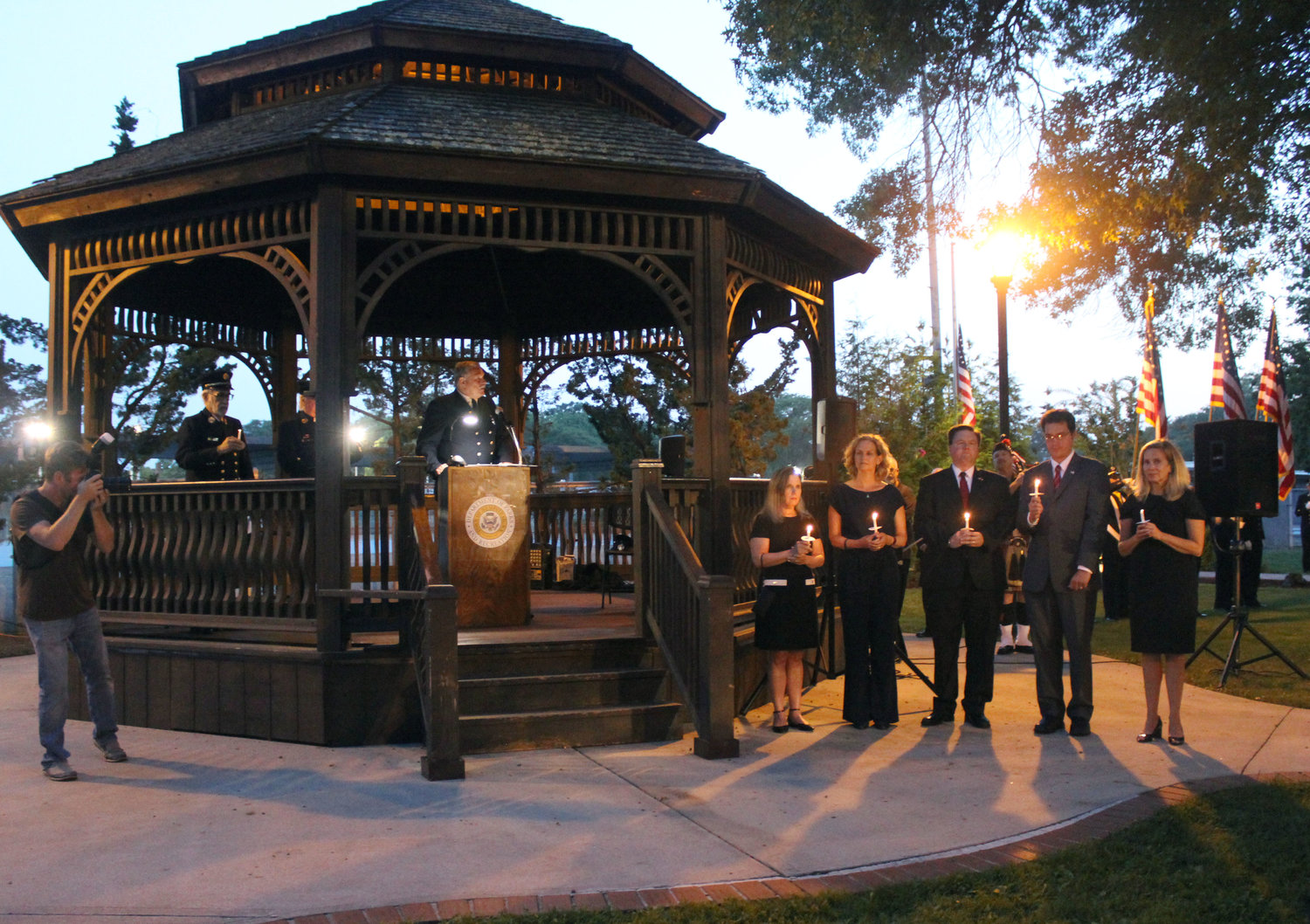 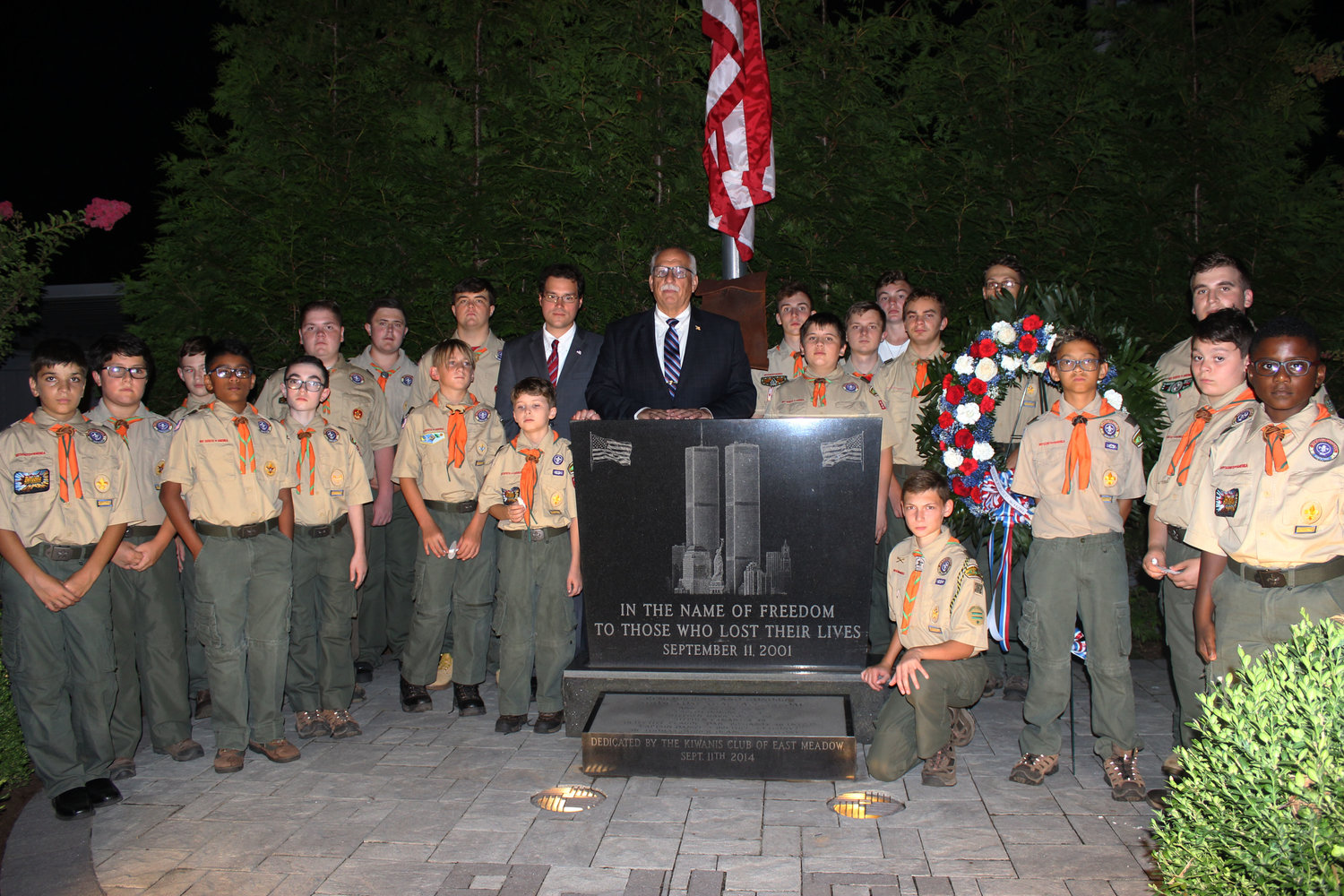 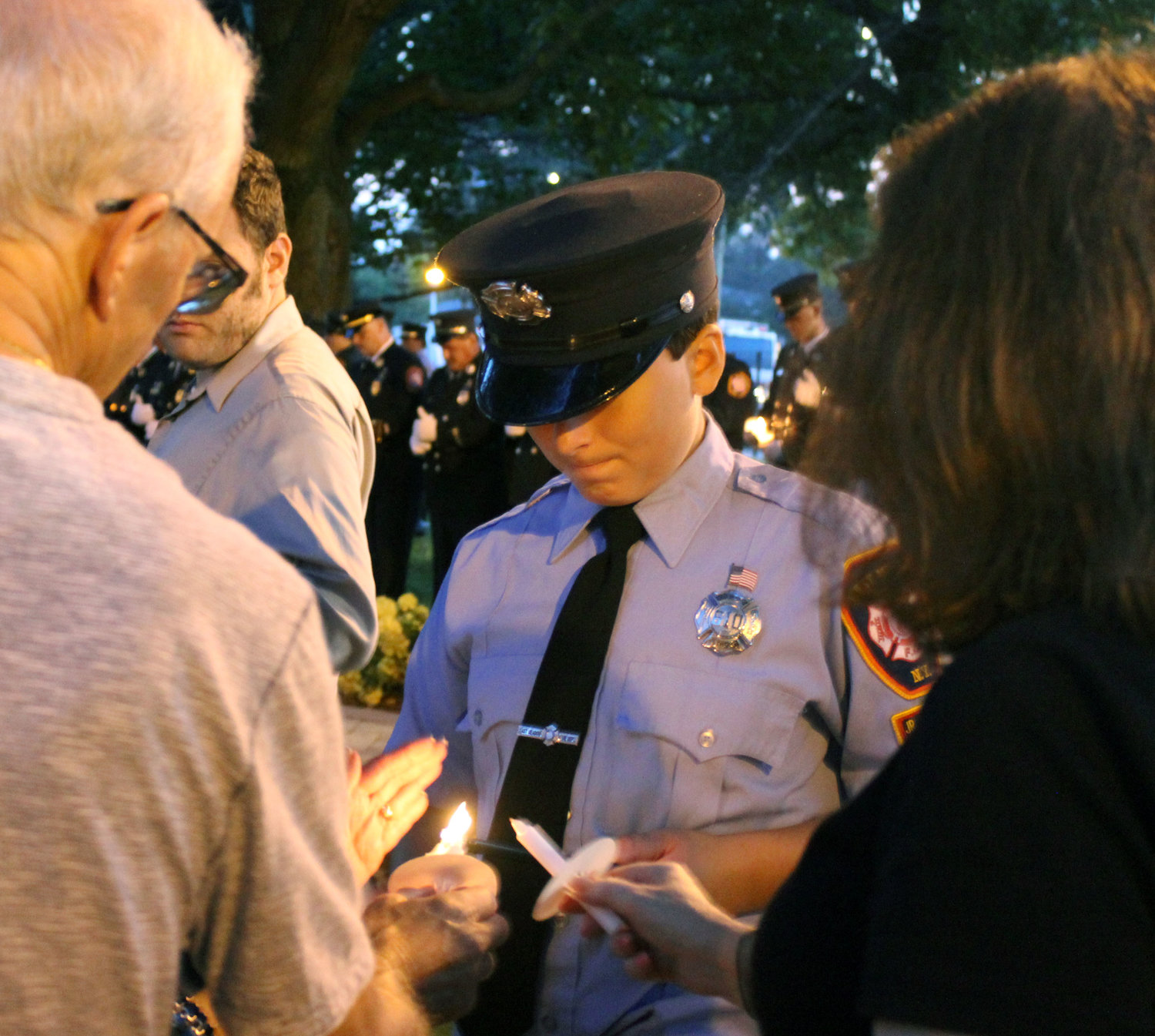 Members of the EMFD’s Junior Fire Company greeted attendees and lit their candles for a twilight vigil.
BRIAN STIEGLITZ/HERALD 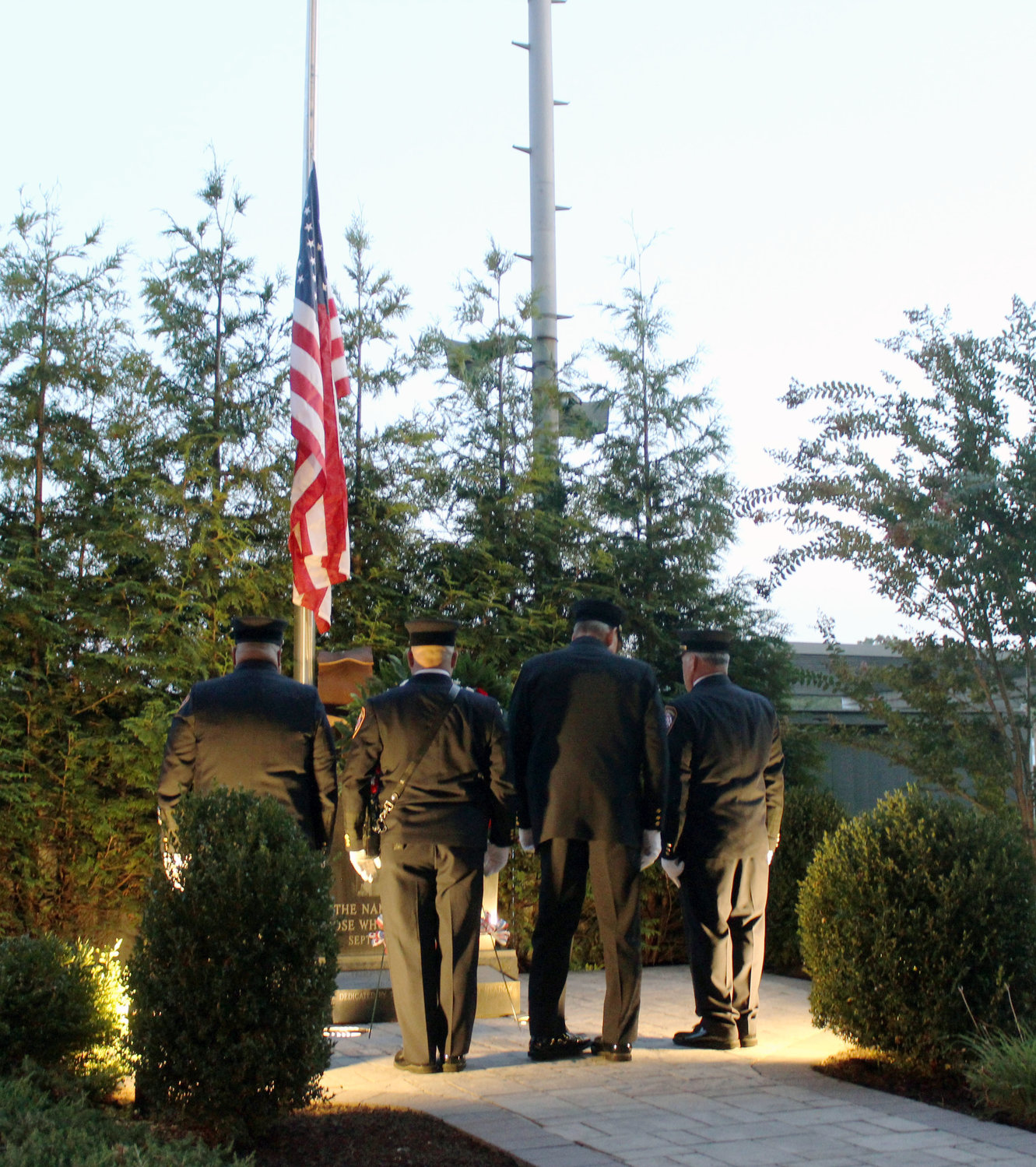 EMFD volunteers placed a wreath in front of the memorial, which was erected by the Kiwanis Club in 2014.
BRIAN STIEGLITZ/HERALD
Previous Next
East Meadow 9/11 memorial gets TLC ahead of ceremony

A 1,800-pound marble statue and a steel beam from the World Trade Center sit in the southeast corner of Veterans Memorial Park in East Meadow. The monument was installed by the East Meadow Kiwanis in 2014, along with a walkway lined with flowers. The flowers didn’t last long, however, as the soil beneath them dried out.

The day before last year’s Sept. 11 memorial ceremony, Mitchell Allen, a past president of the Chamber of Commerce and Kiwanis, spent almost $400 on his own to line the pathway with new flowers. They, too, died, and Allen was expecting to take on the project again this year.

He reached out with his concern to Frank Camarano, chairman of the chamber’s board of directors; Dan Lino, commissioner of the Town of Hempstead’s parks department; and Town Councilman Dennis Dunne. On Sept. 7, the Saturday before this year’s ceremony, members of the chamber met with town officials, including horticulturalist Terence Murphy, and developed a plan.

Within 48 hours, town employees were on their hands and knees in the dirt, planting perennial flowers and spreading mulch on the walkway leading to the memorial.

“The town made a commitment, and by Monday it was done,” Allen said. “And they did a beautiful job. I can’t thank them enough for stepping up to the plate.”

The beautification of the area surrounding the 9/11 memorial is one of the steps in Town Supervisor Laura Gillen’s plan to renovate the town-owned park, which East Meadow residents call their “town square.” Current and former chamber leaders have partnered with the Council of East Meadow Community Organizations to request improvements, most of which involve replacing worn-out or broken equipment.

“We wanted to give East Meadow something to be more proud of,” Dunne said. “I’m so happy to see this park improve, and I want people to be happy to come here.”

In addition to the repairs, the town also allocated funds to build a spray park by the pool, and is seeking bids from contractors.

Gillen will speak about the park, and other topics, at the next public meeting of the Council of East Meadow Community Organizations, on Sept. 25, at 7:30 p.m., at East Meadow Fire Department headquarters, at 197 East Meadow Ave.

Many Americans can recall where they were and what they were doing on Sept. 11, 2001, when they heard that two planes had been hijacked by terrorists and had crashed into the World Trade Center towers.

“Even though 18 years have elapsed, we must remember . . . how our country came together in the face of tragedy,” Rabbi Ronald Androphy, of the East Meadow Jewish Center, said to a crowd of somber faces at a twilight ceremony in Veterans Memorial Park on Sept. 11 that commemorated the lives that were lost in the attacks.

Seven East Meadow residents died that day — four who worked in the towers, two firefighters and a police officer. Others have since died of illnesses they contracted as a result of exposure to the toxins at ground zero, where they worked in the aftermath of the attacks.

The East Meadow Kiwanis erected a memorial in the southeast corner of the park, comprising an 1,800-pound marble statue and a steel beam from the World Trade Center, for the 2014 commemoration. Affixed to the statue is a footstone that reads, “In the name of freedom/To those who lost their lives/September 11, 2001,” and bears the seven names: Ann McGovern, Carlos Dominguez, Stephen Mark Fogel, Stephen LeMantia, Claude “Dan” Richards, Daniel Brethel and Thomas Patrick DeAngelis.

“We must remember and recover that moment,” Androphy said, citing the divisiveness of the current political climate. “My friends, it should not take a tragedy like 9/11 to bring us together.”

The rabbi quoted Sandy Dahl, United Flight 93 pilot Jason Dahl’s wife: “If we learn nothing else from this tragedy, we learn that life is short and there is no time for hate.”

Last week’s ceremony was hosted by the East Meadow Fire Department and led by longtime volunteer firefighter Glen Carpentier, who noted a recent breakthrough in the ongoing effort to provide care to those living with 9/11-related illnesses today: the federal funding of the September 11th Victim Compensation Fund. EMFD members, Carpentier said, have long advocated for an extension of the fund. “I’m so proud to say that our members succeeded,” he said.

On July 29, President Trump signed the funding legislation into law. Its official name is Never Forget the Heroes: James Zadroga, Ray Pfeifer, and Luis Alvarez Permanent Authorization of the September 11th Victim Compensation Fund Act. Pfeifer joined the EMFD’s Engine Company No. 3 in 1978, and became its youngest captain in 1982. From 1987 to 2014, he was also a member of the New York City Fire Department, with which he responded to the attacks. Pfeifer spent eight months at ground zero, and eventually developed kidney cancer. He died in May 2017, at age 59.

Even in the throes of his illness, Pfeifer traveled to Washington to urge lawmakers to create the legislation that now bears his name.

As the ceremony ended, Carpentier led the crowd in singing “God Bless America,” while members of the EMFD Junior Fire Company helped attendees light candles and brighten the darkening sky.