Communities of color are at risk from warming 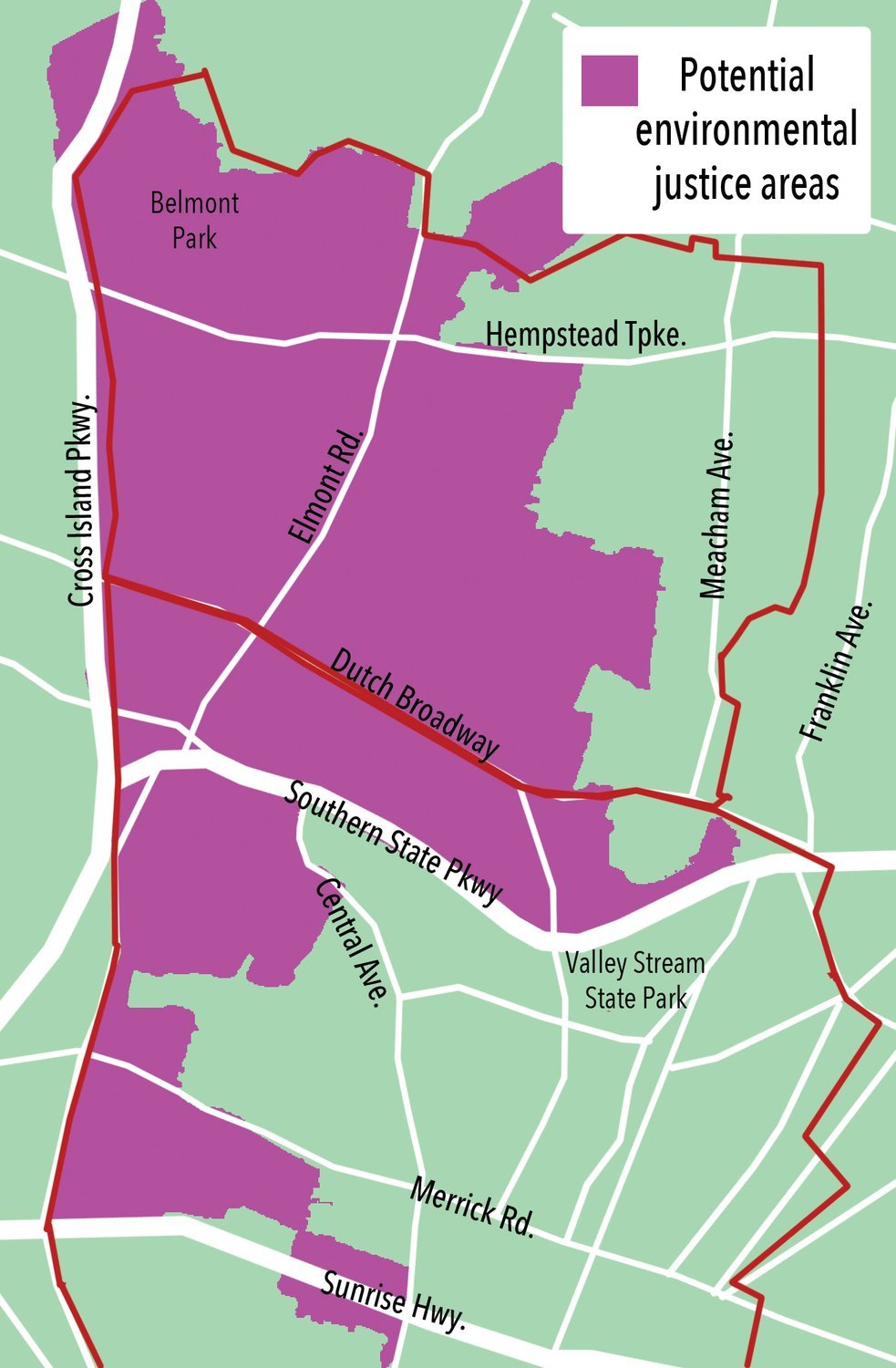 The state Department of Environmental Conservation designated Elmont as an environmental justice area in 2021.
Illustration by Christina Daly/Herald 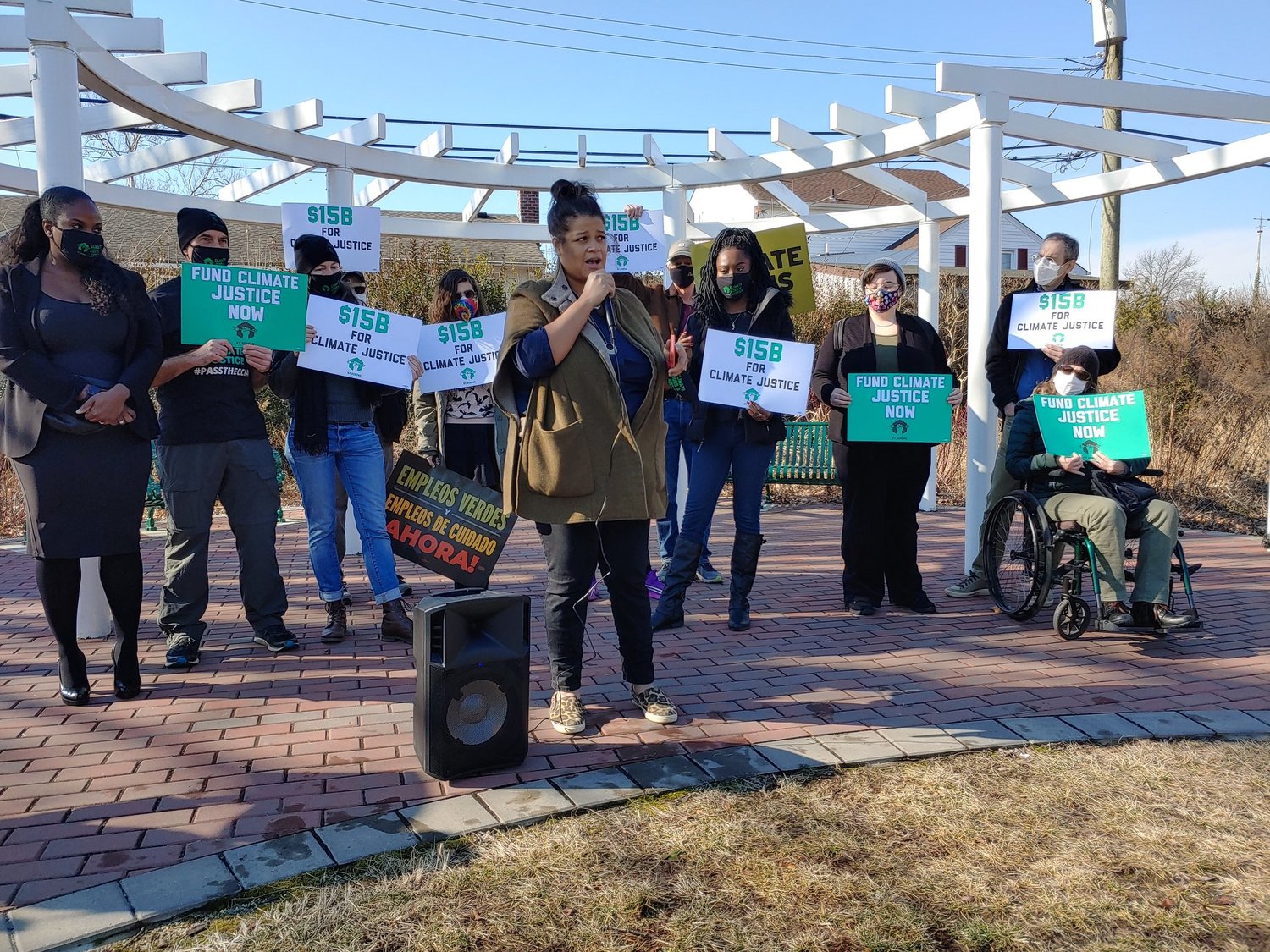 State Assemblywoman Michaelle Solages, who represents Elmont, spoke at the rally, calling for $15 billion in funding for action on climate change.
Courtesy Danny Hopkins
Previous Next
The impacts of climate change on communities of color

-More than 1 million Black Americans live within a half-mile of a natural gas facility.

-More than 1 million face a “cancer risk above EPA’s level of concern” due to unclean air.

-More than 6.7 million live in 91 U.S. counties with oil refineries.

-Black Americans are 75 percent more likely than white Americans to live in “fence-line” communities, areas that are near commercial facilities that produce noise, odor, traffic or emissions.

-Approximately 13.4 percent of Black children in the U.S. suffer from asthma, compared with only 7.3 percent of white children.

State Assemblywomen Michaelle Solages, who represents Elmont, led activists working to counter climate change in this chant at a rally in Valley Stream on Feb. 12 that called for including $15 billion of “climate justice” funding in the 2022-23 state budget.

She recounted the flooding that affected residents across Long Island during Hurricane Sandy, praised officials at every level of government for working to counter the damages of the superstorm and called on elected officials to respond to climate change in the same way.

Solages stressed that Long Island communities are especially vulnerable to sea level rise and warming temperatures. “We have enormous problems when it comes to climate and the weather around us,” she said.

The proposed $15 billion in funding, she said, should be used to create and support green-energy jobs, climate infrastructure, renewable energy and transportation. The funds, she said, would work “to make sure that we are tackling the climate crisis.”

“The crisis is here right now,” she added, “and we need to make sure that we react.”

A total of $3 billion worth of bond funding for climate change-targeted projects can be allocated to communities across the state, if passed by voters this November. The measure was slated for a vote after the Restore Mother Nature Bond Act was signed into law by Gov. Andrew Cuomo.

The act mandated that 35 percent of funding be allocated to community projects in areas designated as environmental justice areas. Elmont received the designation, defined as a community that meets specific racial and socioeconomic criteria, and so qualifies for higher levels of funding.

Solages expressed support for New York state’s climate goals, outlined in the Climate Leadership and Community Protection Act of 2019. The state is committed to zero-emission electricity by 2040 and a greenhouse gas reduction of at least 85 percent below 1990-level emissions by 2050.

“It might seem like a big number, but it’s small in the scale of what’s going on right now,” she said of the $15 billion price tag. She stressed that 40 percent of those funds would be allocated to disadvantaged communities and workers impacted by fossil fuel pollution.

According to Monique Fitzgerald of the Long Island Progressive Coalition, the $15 billion budgetary proposal would be split into four key areas: $4.8 billion for climate-related jobs and green infrastructure funds; $4.6 billion for a community fund that would help particularly hard-hit local areas adapt to climate change; $1 billion to support fossil-fuel-dependent workers’ transition to a greener economy, and $4.6 billion for a fund designed to help low- to moderate-income residents lower their energy costs.

The Long Island Progressive Coalition held a “social media storm” to rally support for the budget proposal at noon on Feb. 22.

“Failure isn’t an option,” the organization said in a statement it released urging New Yorkers to take part in the social media event. “Rampant wildfires, deadly heat waves, violent storms, melting sea ice, flash floods. It’s getting worse before our eyes, and it’s going to keep getting worse unless our leaders find the courage to act.”

On top of New York’s ambitious climate goals, activists are calling for more funding. “We passed landmark legislation with the [Climate Leadership and Community Protection Act],” Solages said at the event. “That was great, but we need to back it up with dollars.”

The Long Island Progressive Coalition and New York Renews are planning a rally on March 8 in Albany. For more information, go to bit.ly/march8albany