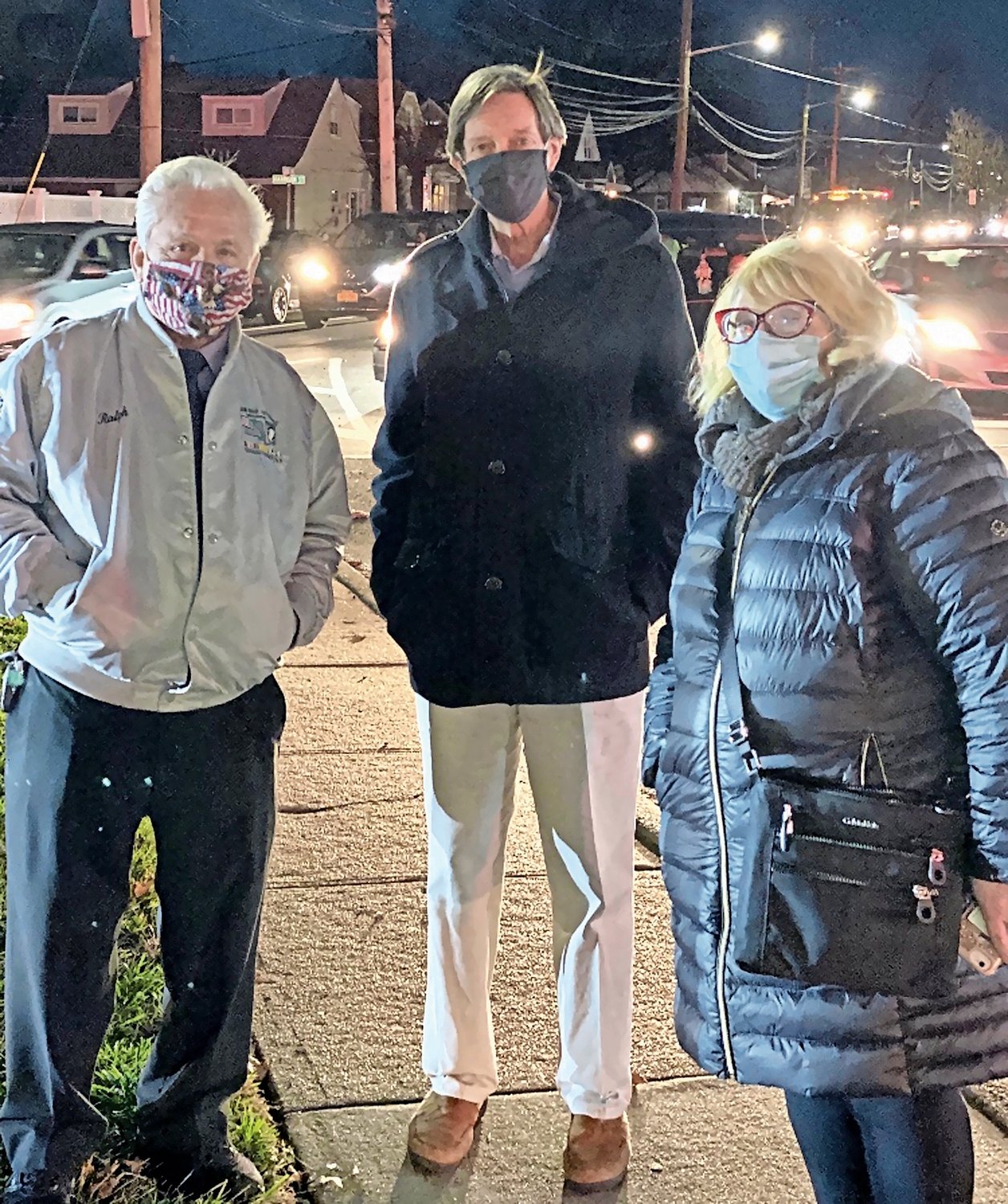 Julie Marchesella, right, has helped run the Elmont Chamber of Commerce’s annual Christmas tree lighting ceremony over her 25 years as a chamber member. She was with board members Ralph Esposito and Pat Boyle at the ceremony in December.
Courtesy Julie Marchesella
By Melissa Koenig

When longtime Elmont Chamber of Commerce President Paul Sapienza died suddenly of a brain aneurysm in November, the board decided to turn to first vice president Julie Marchesella to take over the club’s reins.

She had been a member of the chamber for 25 years, joining shortly after she purchased property in the area, and was officially elected to serve as the chamber’s president in January.

“The board as a whole couldn’t be happier that Julie agreed to take over,” said Pat Boyle, the executive director for Gateway Youth Outreach who serves on the chamber’s board. “She’s perfect for the position.”

Marchesella, of West Islip, has previously served as president of the Merrick Chamber of Commerce, and is the immediate past president and legislative liaison of the Nassau Council Chambers of Commerce, which she has been a member of for 24 years. As such, Boyle said, Marchesella has been vital in bringing the Elmont chamber information about Nassau County programs for small businesses.

“She’s up on everything we need to know about chambers,” said Ralph Esposito, who serves on the chamber board, with Pat Boyle adding, “she’ had her hand in everything that goes on.”

During her time with the Elmont chamber, Marchesella has worked with Sapienza to lobby own officials to rezone and redevelop Hempstead Turnpike with standardized façades and the possibility of adding apartments above some of the businesses.

She has also been involved in discussions about the potential benefits of the UBS Arena at Belmont Park on the Elmont business community, and has helped run the Belmont/Elmont Parade and the chamber’s annual Christmas tree lighting ceremony.

Marchesella is now working to bring these events back and hold meetings in person once it is aain safe to do so, and hopes to continue in Paul Sapienza’s legacy. In fact, Boyle said, the Elmont chamber has recently voted to rename the annual Belmont/Elmont parade and Christmas tree lighting ceremony for Sapienza.

“His name will be emblazoned on Elmont forever,” Boyle said, “which as a friend of his makes me very, very happy.”

Sapienza had taken “such a big role” in the chamber during his 12 years as president, Tania Lawes, another board member, explained. But, she said, “Julie’s doing a great job of handling it all.”

She has already used her authority as president to negotiate a contract with Oceanside-based Jillian’s Circus, an internet marketing service, to help with the chamber’s social media. The company contracts local business owners whenever there is a holiday coming up that relates to their services, Marchesella previously told the Herald, and profiles do-gooders in the community.

“Julie has a way of being very creative,” Lawes, the manager of external affairs and community engagement for the New York Islanders, said, and takes “whatever the situation may be and pivoting it so it all works out successfully.”

“The sky’s the limit if you have the heart and time to get it done,” Lawes added, “and Julie does.”