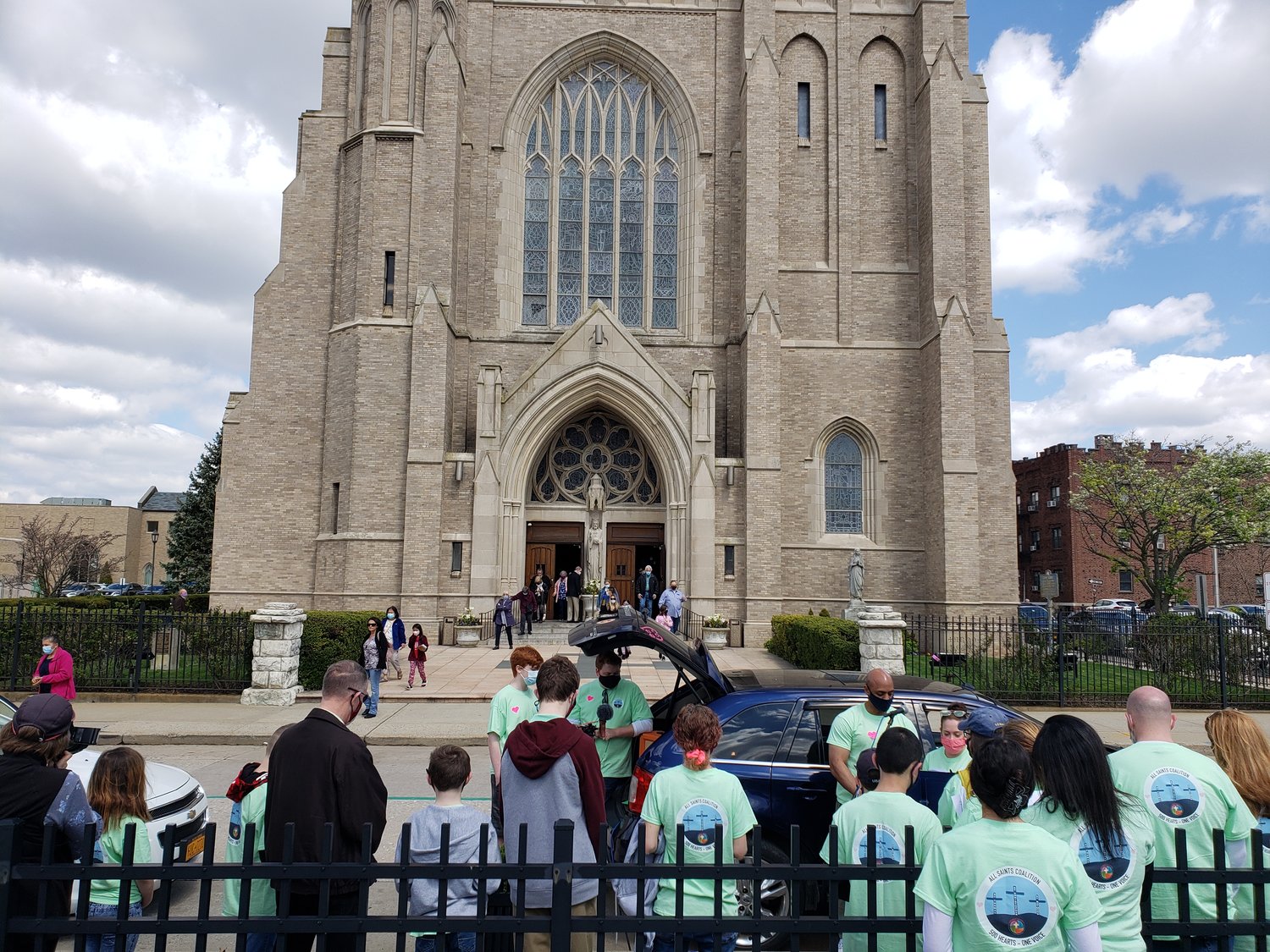 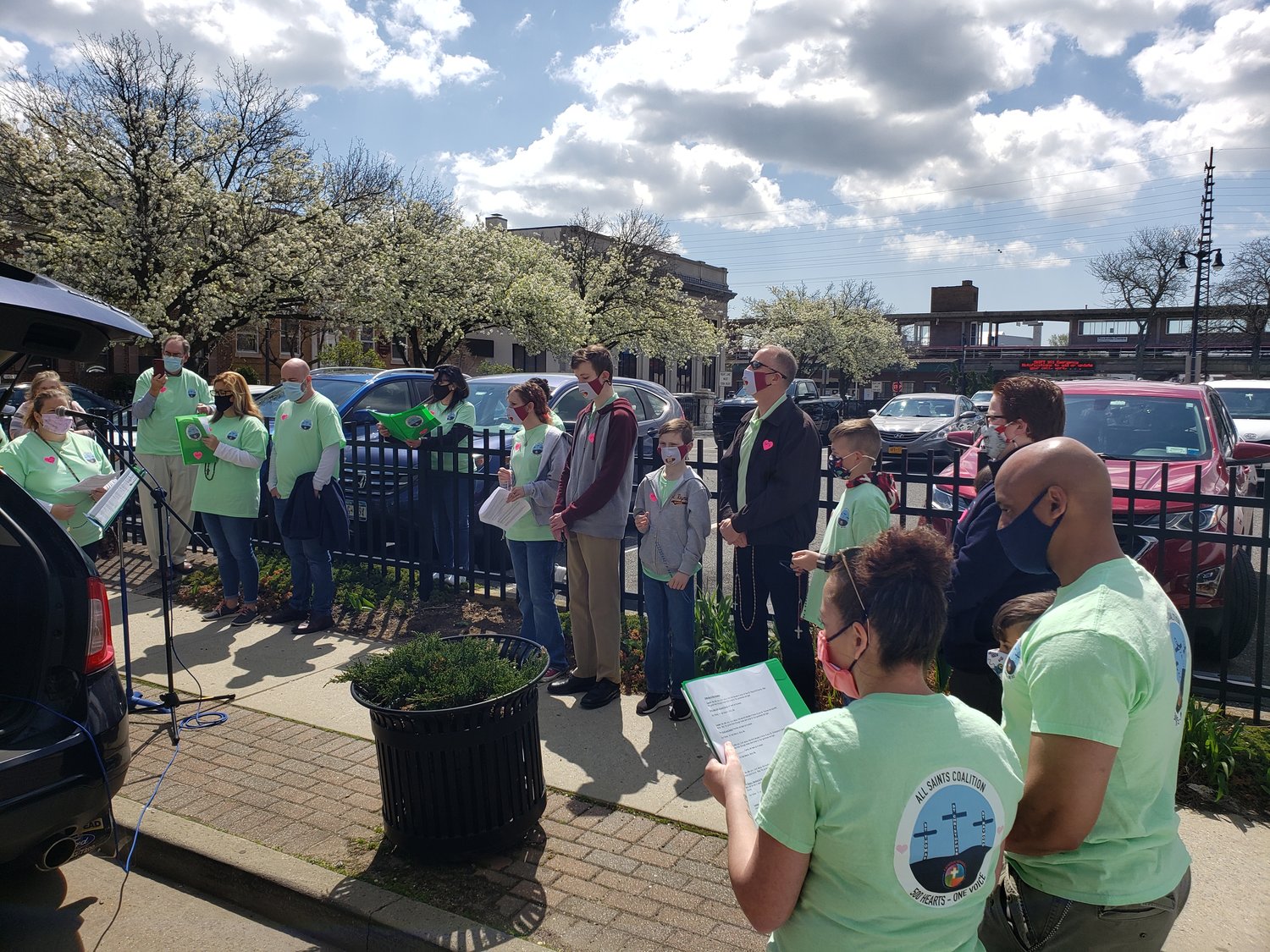 Many of the protesters wore green T-shirts in honor of St. Jude Thaddeus, who is often portrayed wearing green.
Nakeem Grant/Herald 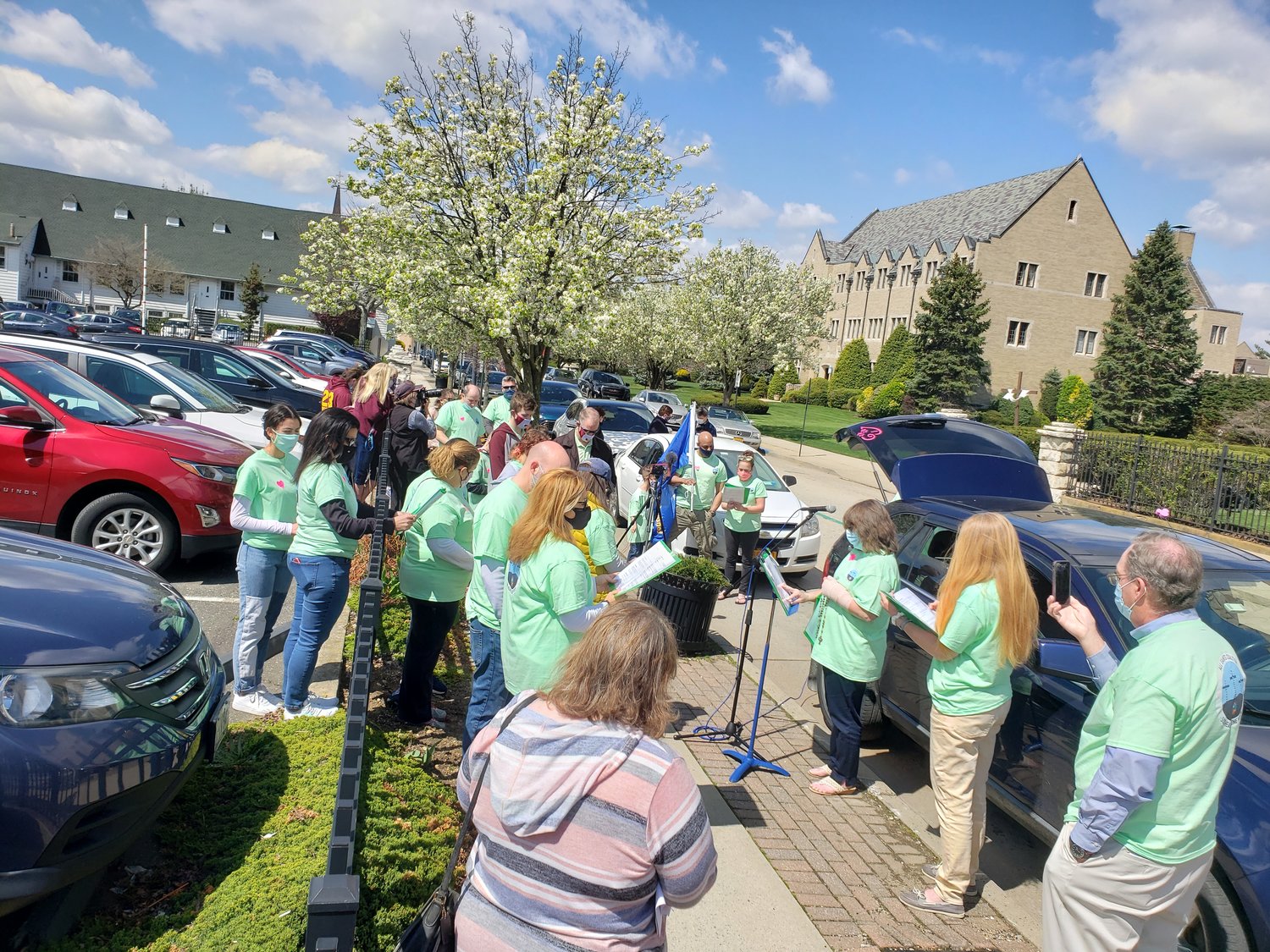 The impending closures of three Catholic schools have sparked an outcry from a number of parents and parishioners. Due to declining enrollment and revenue, the Diocese of Rockville Centre will close St. Thomas the Apostle School, in West Hempstead, St. Christopher’s School, in Baldwin, and St. Raymond School, in East Rockaway, in June.

The announcement triggered a rally outside St. Agnes Cathedral, in Rockville Centre, last Sunday, as roughly three dozen parents, students and alumni gathered to recite the rosary and protest.

“I’ve spoken to people from other parishes that have had school closings, and this seems to be the way they do it,” said Terri Leno, of West Hempstead, whose three sons attended St. Thomas. “Nobody knows it’s coming, and that’s just wrong.”

Leno, who organized the rally with her newly formed group the All Saints Coalition, said that she and other parents had urged the diocese to work with them in the hope of finding ways to keep the schools open. More than 500 students would be impacted, she said.

“There were no options offered other than finding another school,” Leno said.

A 17-year member of St. Thomas’s school board, which raised about $70,000 a year through fundraisers, Leno said she and other parents agreed that given the opportunity to raise funds, they could have kept the school open for at least another year.

“It seems like everything has been upside down since Covid hit,” said St. Thomas alumna Maryann Harding. “I think all of us were mainly upset with how the news was delivered. Let us be a part of the process. That’s all we’re asking for.”

Harding’s father, Ray Rockensies, worked in the parish’s rectory as a business manager from 2003 to 2016, and is now a trustee in the parish. A longtime parishioner, Rockensies recalled that about 30 years ago, the Rev. John Martin, then the parish leader, had plans to close the school. But Martin shared his thoughts with parishioners, Rockensies said, before making a final decision.

“We had time to hold a capital campaign fund to raise money, and ultimately we kept the school open,” Rockensies recalled. “My feeling is that if we had enough time, I know that we could’ve marshaled a lot of the alumni to make contributions and keep the school open a little longer.”

In separate statements issued to parents of students at the three schools, Sean Dolan, the diocese’s director of communications, said the diocese was saddened to announce the closures. Calls to Dolan requesting comment in response to the community outcry had not been returned at press time on Monday.

The diocese’s Department of Education and school leaders have helped students and their families find other schools to attend. St. Raymond PTA President Vanessa DelPezzo said that her two sons would attend Our Lady of Lourdes School in Malverne next year.

“My family and I have had such a wonderful experience here at St. Raymond,” DelPezzo said. “We’re well aware of the decline in student enrollment in recent years, but there was never any mention of the idea that our school would be closing. I know this isn’t realistic, but my biggest hope is for the school to reopen, and that everybody gets to stay.”

Megan Smith, a member of St. Thomas’s pastoral council, said her fifth-grader would attend Kellenberg Memorial High School in Uniondale next year. Smith, another alumna of St. Thomas, said it wouldn’t be an easy transition.

“This will be a huge change, both physically and emotionally, for all of us,” she said. “When you think of West Hempstead, you think of St. Thomas.”

Jenn Jaegar, a school board member of St. Christopher’s for the past two years, said that school parents there felt just as blindsided as those at the other schools. The announcement of the St. Christopher’s closure came a week after the news about St. Thomas and St. Raymond.

“I think most of us believed that we had gotten by and that we would stay open,” Jaegar said. “We were thinking our school would become an option for those students at St. Thomas and St. Raymond, but unfortunately we got hit with an email a week later saying that we were closing, too.”

With the schools in close proximity to one another, Jaegar said, she wondered whether the idea of a new regional school for their students was discussed. “I don’t think all of the parents would be happy with that decision,” she said, “but at least the kids could’ve stayed together with a lot of their classmates and then make some new friends.”

Jaegar added that she was concerned about staff members who will lose their jobs. The Rev. Nicholas Zientarski, the pastor at St. Christopher’s, said the diocese was helping staff members find other jobs.

Bonnie Porzio, another St. Thomas alumna, said that in addition to parents’ concerns, she was worried about the long-term effects of Catholic school closures on communities. “This will have repercussions beyond the school,” Porzio said. “The property values in the neighborhood will dramatically be affected by St. Thomas’s closure.”

“A lot of us are still heartbroken over this,” she continued. “They need to know that this is not OK. All we want from them is to just talk to us. We have to continue this conversation so that this gets their attention.”