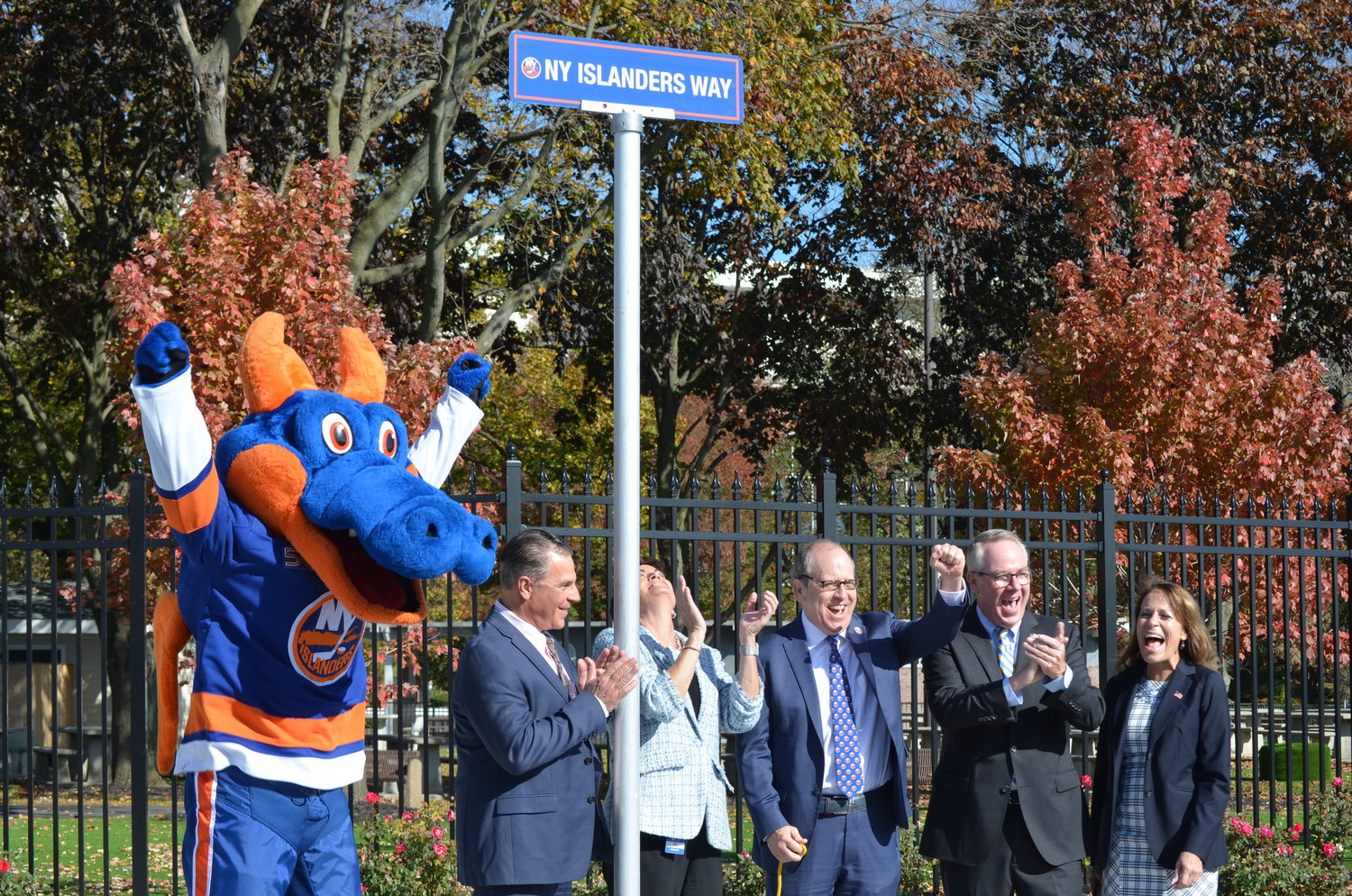 Coming together to unveil the new street sign, with the help of Islanders mascot Sparky the dragon, were Islanders co-owner Ledecky and Hempstead Town Supervisor Don Clavin, third and second from right.
Ana Borruto/Herald 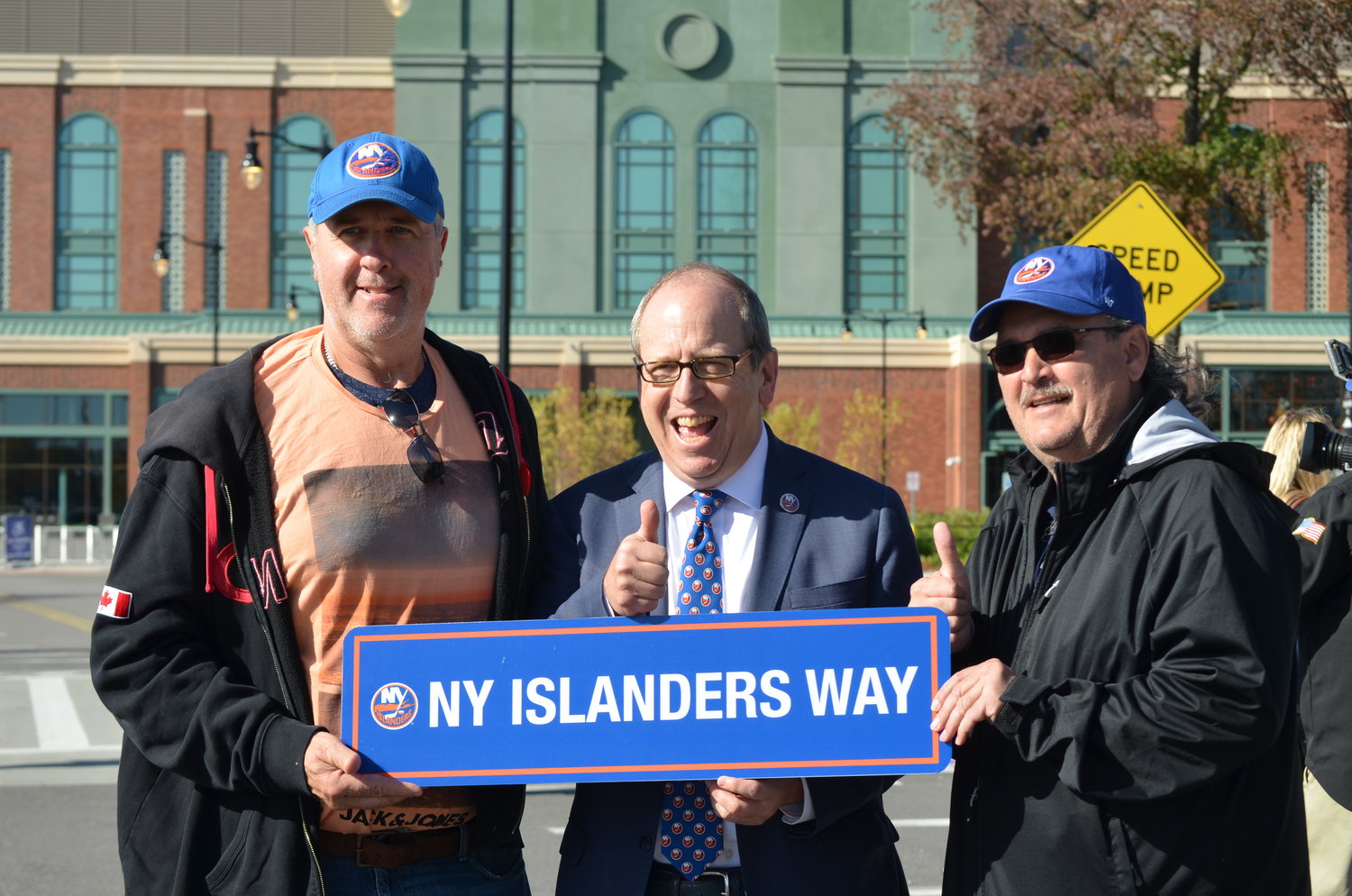 The New York Islanders are celebrating their 50th anniversary as a hockey franchise, Last year, the organization opened the UBS Arena in Elmont, and the team recently joined the town in unveiling a new name for a heavily traveled road adjacent to the arena.

Red Road, which lies next to the Silver and Diamond parking lots of UBS, has been renamed NY Islanders Way.

The Islanders were established as an NHL team in 1972, and their original home was the Nassau Veterans Memorial Coliseum in Uniondale. They would go on to win four consecutive Stanley Cup championships from 1980 to 1983. Officials said that 2022 marks the 50th year of a strong partnership between the Islanders and the Town of Hempstead.

“This is a monumental and important milestone in the evolution of the building,” UBS Arena President Kim Stone said. “We’re putting a stamp on this for the community to see and come and enjoy for many generations. We’re pleased to continue to honor the New York Islanders and their fans during this special 50th anniversary season with the unveiling of the name. This building is a fabric of the community as well. We want to be that symbol.”

Town of Hempstead Supervisor Don Clavin said the Islanders and the team’s co-owner, Jon Ledecky, have meant a great deal to the community.

“I think something that’s really special is the relationship that he has created with the fans,” Clavin said. “I love it when I walk around town and the Islanders’ players walk around with their family members and take photos with kids, and I think it really stems from Jon’s leadership with his team. He’s at every one of these games. He’s embracing all these fans. He’s hanging out with them and you can see that hockey thrives in him. The Islanders are thriving and they are lucky to have him as the owner.”

Ledecky said, “The islanders’ nation is strong and it’s incredible. The naming of NY Islanders Way during the 50th anniversary season is the latest illustration of the great partnership between the Islanders, the UBS Arena and the Town of Hempstead. It’s a privilege for us to be in our beautiful new home, and we are thrilled to be part of the future of Elmont. The Islanders are the people’s team. Ownership always wants to be great neighbors and do what’s right for the fans.”

Some of the most hardcore Islanders’ fans were on hand in Elmont to witness the street renaming. Dale Hayes, a 60-year-old retired police officer from Ottawa, Canada, was visiting New York with his best friend, Joe Mesa, to take part in a charity gala to benefit the Three Strohm Sisters Family Foundation, a non-profit founded by three sisters — Kathleen Sarna, Lucille Montrony and Jane Stranzcuk — who all battled breast cancer. The two fans would attend Thursday night’s game against the Arizona Coyotes and witnessed the unveiling of the new street name.

Hayes is a hockey lover who previously held season tickets for the Ottawa 67’s, a junior ice hockey team that plays in the Ontario Hockey League. He showed favoritism for one particular player, Denis Potvin, who played for the Ottawa 67’s from 1968 to 1973. Hayes said he loved the way Potvin played and knew he would follow Potvin for the rest of his hockey career.

“I told my father, ‘Whatever team drafts him, other than the New York Rangers and the Montreal Canadiens, that is going to be my team,’” Hayes said.

The Islanders drafted Potvin first overall in 1973, and he later became the team’s captain and a three-time Norris Trophy winner as the NHL’s top defenseman while helping lead the Islanders to four Stanley Cup championships. After 15 seasons, Potvin retired in 1988 and was inducted into the Hockey Hall of Fame in 1991 and Nassau County Sports Hall of Fame in 2002.

Ledecky offered Hayes and Mesa tickets to Saturday’s game against the Columbus Blue Jackets during their visit and a tour of the arena.

Hayes said he and Mesa planned to stay in New York an extra two days “just to have this honor.”

“I’m pretty touched,” Hayes said. “You have no idea how this makes me feel — I’m actually thinking of coming back here now in the spring and bringing my wife, but I can say that I was here for their 50th year.”

Mesa said it was an amazing feeling being at the UBS Arena in Elmont and watching his friend live out one of his lifelong aspirations. “It’s my first time being here and seeing my friend really happy, supporting him, it’s just unbelievable,” Mesa said. “It’s his dream, his bucket list.”