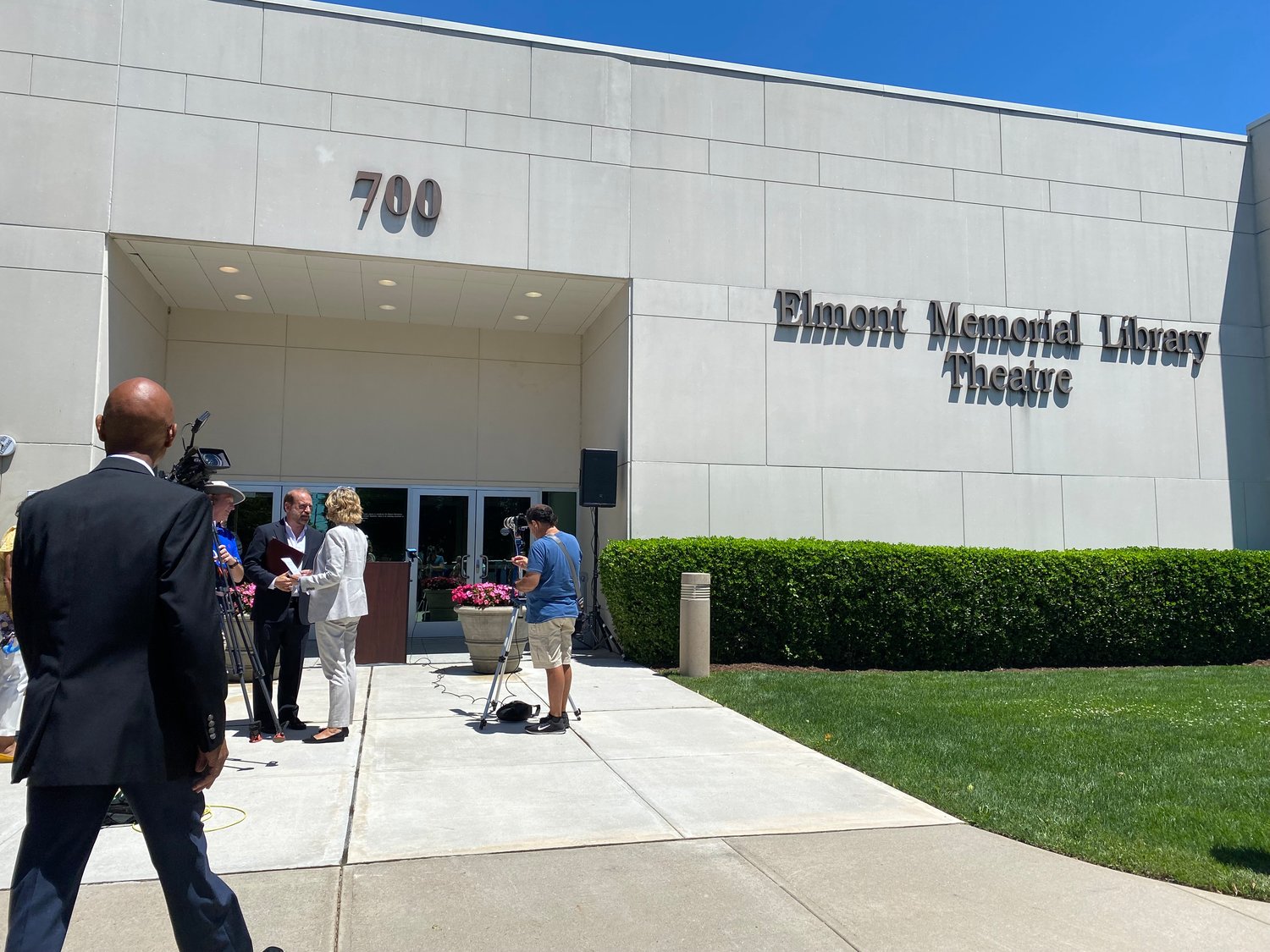 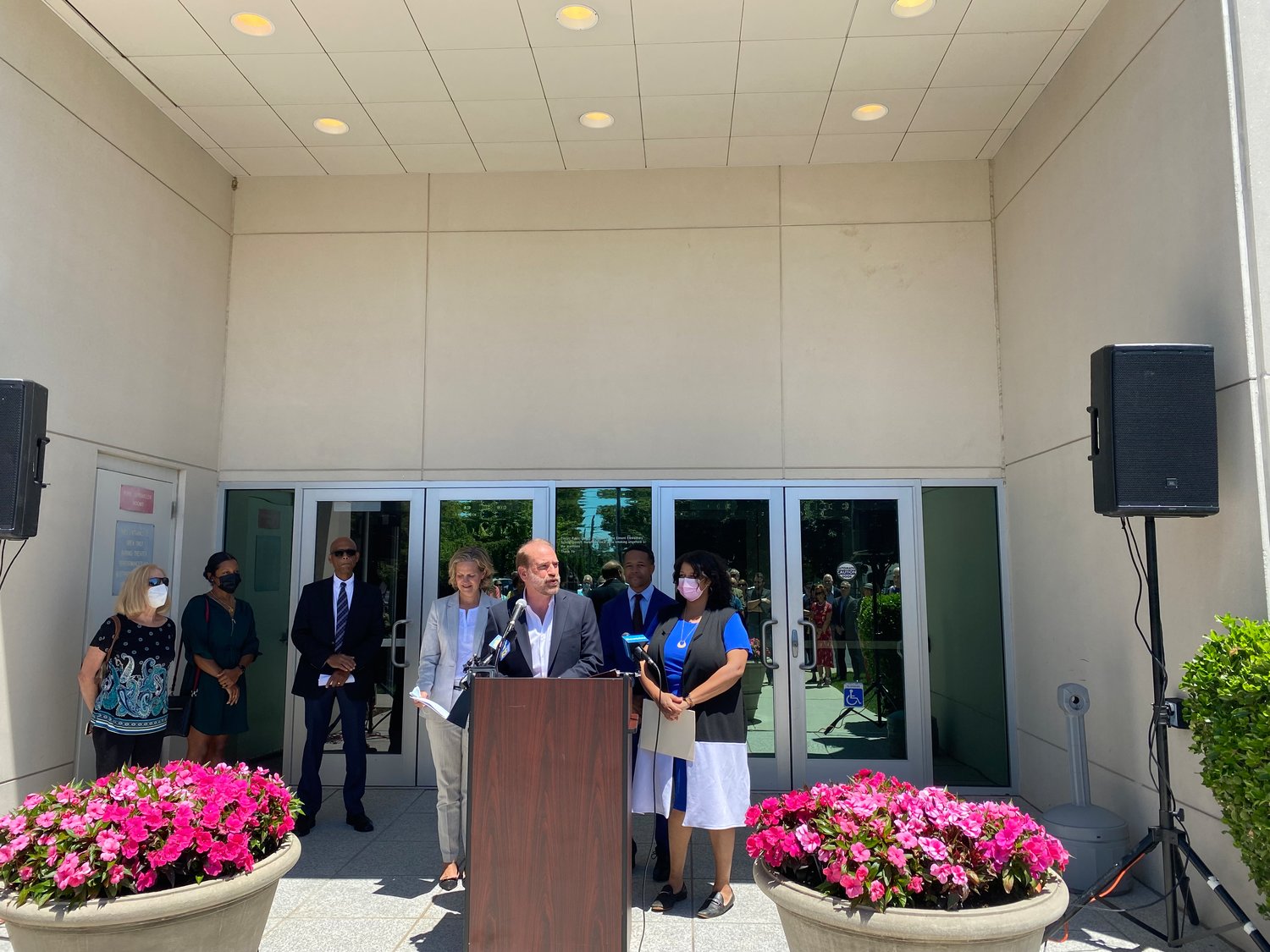 I look forward to creating the highest level of Broadway-caliber musicals … in order to bring the very best in musical theater to Nassau County.”
Kevin F. Harrington, Producer, Plaza Theatrical
By Robert Traverso

In March of 2020, it was uncertain whether Plaza Theatrical, the Long Island touring theater founded in 1983, would survive the coronavirus pandemic, which shut down Broadway and crippled the performing arts nationwide.

Fifteen months later, at a news conference on June 23, Plaza Theatrical Producer Kevin F. Harrington announced a partnership between the organization and Elmont Memorial Library to open the first professional theater in Nassau County at the library’s theater this fall.

“After a very challenging year and a half for all arts organizations across our country,” Harrington said, “I am delighted to share the news that the curtain is about to rise on Plaza Theatrical’s new professional Broadway division, as we open Nassau County’s only professional theater this fall here at the state-of-the-art Elmont Memorial Library Theater.”

Harrington announced the creation of a new division of the organization, called Plaza AEA Productions Limited, that will allow Broadway talent to appear in Plaza Theatrical’s musicals. Productions will be mounted exclusively at the library theater.

Harrington said he was excited about the prospects of a local professional theater. “There are so many amazing destinations here in Nassau County,” he said, “and now, with the Plaza organization, we add a professional theater to our incredible county.”

Harrington and County Executive Laura Curran, who attended the news conference, emphasized the impact the theater is expected to have on the community and the local economy. “Our productions will increase visitors to the area and create job opportunities, which will have a direct economic impact on local businesses,” Harrington said, touting the proximity of the UBS Arena, in Belmont Park, to the theater. “Plaza’s new professional venue will be part of Nassau County’s entertainment hub.”

Curran agreed, and spoke about the role the theater would play in creating jobs for residents of Elmont and its surrounding communities. “It puts people to work, it gives us a certain cachet, and it’s really good for us,” she said.

In addition to Broadway musicals, the year-round programming will feature children’s theater productions, weekday arts and education program for school groups and camps and after-school educational theater arts programs for students in kindergarten through high school.

Harrington pledged that Plaza Theatrical would partner with local nonprofit organizations as well as the Elmont and Sewanhaka school districts to support theater education for all students.

Livingston Young, board president of the Elmont Library, congratulated Harrington and the Plaza organization, and said he was hopeful about their commitment to work with local schools to engage students in theater and the arts.

“We are extremely delighted to have Plaza Theatrical here in Elmont,” Young said. “We hope the students in our district will take advantage of the shows and internship programs that will be available to them.”

“There are so many wonderful careers for children to explore through the arts,” Curran said. “We welcome culture, we embrace culture, because it makes life more rich.”

“With all these programs,” Harrington said, “the Plaza organization is at the forefront of creating a community of theater enthusiasts and developing new audiences in Nassau County and beyond.”

He emphasized Plaza Theatrical’s commitment to being part of the resurgence of the arts in post-pandemic Nassau County and to bringing high-quality theater to Elmont residents. “Producing and directing musicals which entertain, educate and inspire is a major part of who I am,” Harrington said. “I look forward to creating the highest level of Broadway-caliber musicals … in order to bring the very best in musical theater to Nassau County.”

“Our mission has always been to bring Broadway shows to people who cannot afford, or no longer get to, Broadway,” said Denise Riven, a representative of Plaza. “So to be able to do that in this location thrills us.”

Plaza Theatrical, which will celebrate its 40th anniversary in 2022, is set to begin productions at the new theater this fall. They will include Broadway talent, live orchestras, professional stage designers and the resources of a Broadway casting director, Harrington said.

Information on musicals in 2021-22 will be available on the organization’s new website, www.broadwaylongisland.com, which launches on July 6. Tickets will be available beginning July 13, and can be purchased either online or by calling the box office.