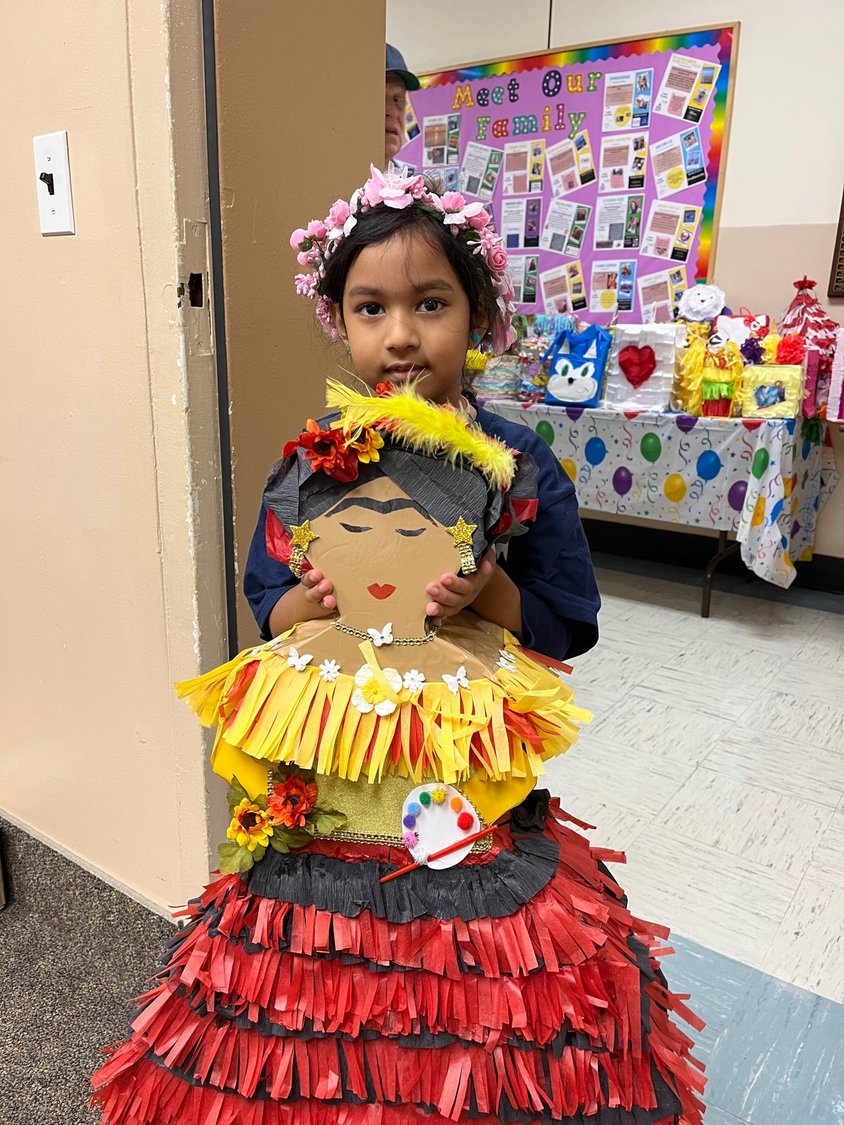 Hispanic school leaders, from Board of Education trustees to school administrators and staff, are reflecting on the meaning and significance of Hispanic Heritage Month, a celebration of America’s largest minority. Above, William L. Buck Elementary student shows off her Frida Kahlo.
Courtesy Valley Stream District 24
Hispanic leaders talk

“Being Hispanic to me meant there was also a great sense in our community that the children aspired to do better than our parents. It influenced how I looked at things. I was raised with the thought that we were blessed with the little we had. Our family’s commitment to our culture, respect, faith and loyalty are the values I personally and professionally apply to everything.”

”National Hispanic Heritage represents to me the recognition of the diverse cultures and the history of the Hispanic community. It is an opportunity to reflect on who we are, our contributions, and our growth prospects.”

“What I love the most about our heritage is that it is not monolithic. We are multifaceted and there is so much to learn on all levels.”

National Hispanic Heritage Month is a month-long celebration whose timing fits with the national independence days of seven Latin American countries and is a testament to the rich range of cultures and histories of Hispanic Americans in the United States.

For some, National Hispanic Heritage Month, which runs from Sept. 15 to Oct. 15, is a time to shine a spotlight on the lives, contributions, and achievements of Hispanic Americans. For others, it’s an opportunity to applaud and reflect on those who’ve made enormous strides for the inclusion and representation of America’s largest minority group.

For those looking to breathe new life into this annual observance, you may find inspiration from looking at examples of Hispanics in Valley Stream who’ve sought to make better the lives of their community — not least those men and women sitting on school boards or at the top level of school administration.

Hispanic leader Armando Hernandez, District 24 Board of Education trustee, says the diversity of a decision-making body like a school board is tied to its success.

“Our range of races and wide-ranging points of view makes a more effective (school) board” at Valley Stream 24, said Hernandez. “It ensures that our children are getting the best out of our district’s educational resources. So my advice (to Hispanics) is to get involved.”

Hernandez took his seat in 2014 as the sole Hispanic board member on the seven-member board. Now, there are two others.

Hernandez’s Dominican-American family sought a new life in the United States under immigration policies here and in the Dominican Republic that he describes “as callous and set up to discourage immigrants.”

“My parents had to leave behind my then-baby sisters with relatives to establish a home for us here in New York,” said Hernandez, a second-generation immigrant, and father of three boys. “I could not fathom spending even one day, much less a few years” without them in childhood.

“My family’s story is not that dissimilar to that of millions of other families that sacrificed so much to ensure that the future was brighter for their kids, grandkids, and future generations,” he added.

Embracing his heritage while finding his place in the larger fabric of American life did not come easy.

Then as a young adult, Hernandez faced the prospect of navigating through the U.S. higher education system as a first-generation college student.

But through this experience, he came away with a passion to “guide the next generation to know the intricacies, importance, and benefits of higher education” regardless of where they’re from.

His roots have always remained a point of pride throughout his life.

“I’m proud Latino culture is one of the main threads in the cultural fabric of America,” he said. “Latino contributions are strong and consistent throughout American music, art, movies, television, and food — oh the delicious food.”

Similar to Hernandez, District 30 superintendent Roxanne Garcia-France, who was raised in an immigrant family of Cuban and Jamaican descent, struggled to find a foothold in the melting pot of America while remaining true to her mixed cultural identity.

Growing up as a second-generation immigrant, fitting in was difficult, said Garcia-France, who felt bothered by her peers for her identity. She grew up speaking two dialects of English – British English and Jamaican Patois.

Pressed to fit in with the rest of her peers, she let go of the familiar sounds of her home dialects and learn to speak American English stocked with its own unique and unfamiliar pronunciations, spelling, figurative language, and grammar rules. The learning curve was steep, but the result paid off.

“Now, I am fluent in three dialects of English,” said Garcia-France, who soon discovered strength and beauty in the complexity of her identity. “As I got older, I learned I had the very best of both worlds because being a second-generation immigrant allowed me to develop cultural perspective and empathy for others.”

“The Cuban culture is influenced by African, Spanish, and Caribbean roots,” said Garcia-France. She feels more connected to her roots through her love of music. “I often listen to Afro-Latino music while playing my congas and dancing.”

As a young girl, she instantly identified with the Cuban American salsa icon, Celia Cruz. When she saw Cruz on a record album cover, she took comfort in the fact that “she looked like me. This helped me embrace my heritage.”

For Garcia-France, National Hispanic Heritage Month offers Hispanics the platform to “honor our authentic identities,” and “when we give our students the permission to do the same, we ignite their passion to reach their fullest potential in becoming the next generation of global leaders.”

Have an opinion about National Hispanic Heritage Month? Send an email to jlasso@liherald.com.