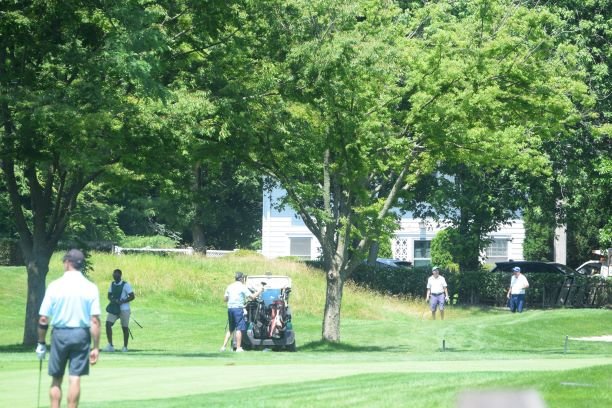 The Jan. 18 meeting where town and village officials and the developers were to discuss a plan for the Woodmere Club was canceled by the Town of Hempstead. Above, golfers play on the course in 2019.
Herald file photo
By Jeff Bessen

Even before the sale of the Woodmere Club was consummated in early 2017, the battle over what it would become began in late 2016, with the formation of a grass-roots organization, the Five Towns Civic Association.

It now appears that the fight over the nearly 114-year-old club’s 118 acres will continue, after the cancellation of a meeting, reportedly scheduled for Jan. 18, involving the developers Efrem Gerszberg and Robert Weiss, who bought the club nearly five years ago, Town of Hempstead officials and other local leaders.

Hempstead Town Councilman Anthony D’Esposito said there was no meeting scheduled. He noted current litigation over the development of the property, and said that town officials would speak with the developers only with town attorneys present.

Lawrence Mayor Alex Edelman said there was a meeting scheduled with Town Supervisor Don Clavin and the developers. Gerszberg also said that such a meeting had been scheduled. Greg Blower, the town’s communications director, did not return a call requesting comment.

“We are very surprised that the meeting that was scheduled with Lawrence officials and Donald Clavin was cancelled by [the Town of] Hempstead,” Weiss wrote in an email. “It would have been a good opportunity to try to settle this litigation as there has been a groundswell of support for the age 55+ condominium proposal. It is apparent that Hempstead has no intention of engaging in good faith discussions that could benefit the community. Instead, they have chosen to continue down the path of protracted litigation that could ultimately result in a $200 million award against Hempstead, Lawrence and Woodsburgh.”

Multiple lawsuits have been filed over Gerzberg and Weiss’s proposals to build either condominiums or homes on the club’s land, which sprawls over the Town of Hempstead hamlet of Woodmere and the villages of Lawrence and Woodsburgh, and borders Cedarhurst village as well.

Most recently, the developers have sued the town, Lawrence and Woodsburgh in federal court for $200 million over the restrictions of the municipalities’ Coastal Conservation District.

Created in 2020, the district divided the club land into three “subdistricts.” An 83.3-acre parcel, or 70 percent of the site, was designated an open space/recreation subdistrict. There would also be a single-family residential subdistrict of 29.4 acres, or 24 percent of the property, and a 5.7-acre clubhouse/hospitality subdistrict, accounting for 5 percent of the land.

Community members have endorsed Gerszberg and Weiss’s plan to build two four-story attached buildings with 199 luxury condos for resident 55 and older along Broadway, in Woodmere, on 20 acres of the club property.

Another 80 acres would be deeded to the North Shore Land Alliance — an Oyster Bay-based nonprofit land trust that aims to preserve, in perpetuity, green spaces, farmland, wetlands, groundwater and historical sites — to be turned into a nature preserve.

“We welcome the opportunity to be a part of this,” said NSLA President Lisa Ott, noting that her group met with residents and the developers last fall. The preserve, she said, would have educational, environmental and health benefits.

“We’re going to try to offer a situation or settlement and get out of this to avoid future litigation and money,” Edelman said. “I think, considering the overall situation, this would be the best bet for the villages of Lawrence, Cedarhurst, Woodsburgh and the whole Five Town area.”

Gerszberg and Weiss reportedly agreed to put up $1 million to initiate the land preservation, and another $1 million over the next few years. The remaining 18 acres would be divided into roughly 7 acres for the clubhouse and roughly 13 acres of additional landscaped and preserved areas. Land around what was the 17th hole of the golf course would also remain open space.

“We have spent considerable time with the Five Towns Civic Association and over 40 adjacent neighbors to formulate a plan that they support,” Gerszberg wrote in an email.

The developers’ original proposal, submitted in 2019, was to build 285 single-family homes on 114.5 acres. In 2020 the plan was tweaked for one fewer home on the same acreage, with 247 homes within Woodmere’s boundaries, 24 in Woodsburgh and 13 in Lawrence.

Last May, the developers contacted community members and discussed their plan. Neighbors met in groups of roughly 10, and with the support of the Five Towns Civic Association, the plan gained steam, addressing the primary issues residents were concerned about: flooding mitigation, traffic volume and roadway infrastructure.

“We appreciate the developers’ acknowledgement that over development would have a devastating impact on local traffic flooding and public safety,” Five Towns Civic Association member Rena Saffra wrote in an email. “This is an encouraging step in the right direction which will need to be fleshed out further.”

Have an opinion on development of the Woodmere Club? Send a letter to jbessen@liherald.com.