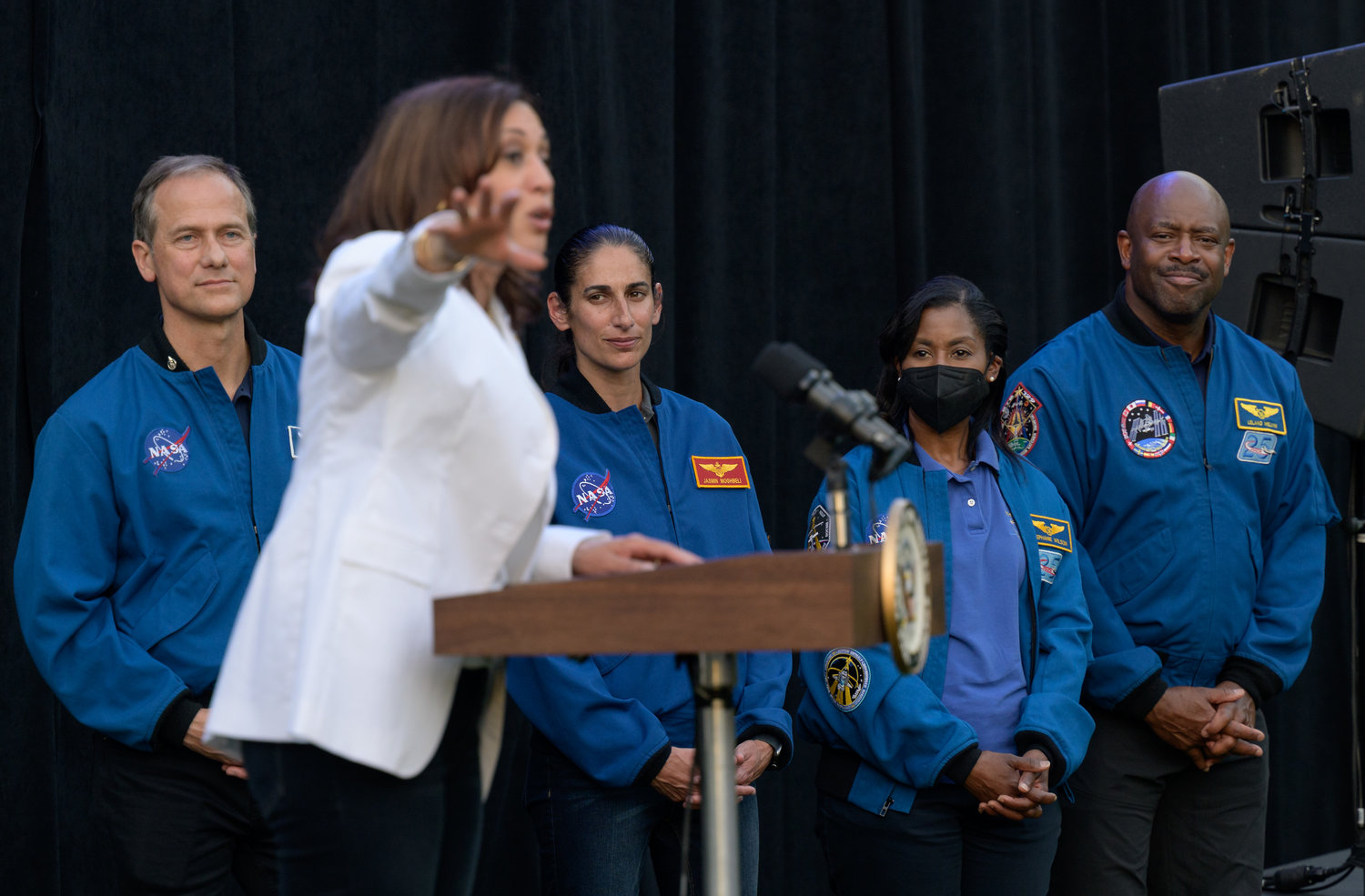 Vice President Kamala Harris gives remarks as NASA astronauts Tom Marshburn, Jasmin Moghbeli, Stephanie Wilson, and Former NASA astronaut Leland Melvin, right, look on prior to the screening of the movie Lightyear on the grounds of the Vice President's residence at the Naval Observatory, Friday, June 17, 2022, in Washington. The Vice President and Second Gentleman hosted an evening of NASA STEM activities at the Naval Observatory for military families and local STEM students and their families, including a special screening of Disney Pixar’s Lightyear.
NASA/Bill Ingalls
By Karina Kovac

Vice President Kamala Harris and Second Gentleman Douglas Emhoff hosted an evening of NASA STEM activities on June 17th at the Naval Observatory for military families and local students and their families, which included a special screening of Disney Pixar’s new film Lightyear. Baldwin born astronaut Jasmin Moghbeli was among the astronauts at the event to educate and answer questions about their time in space.

NASA provided three hands-on STEM activities to inspire students from fourth to eight grade to participate in the science, technology, engineering and math behind NASA’s missions.

Marshburn recently returned with NASA’s SpaceX Crew-3 from the International Space Station and was the NASA technical consultant on the new Pixar film. Also in attendance were Lightyear actors Keke Palmer and Uzo Aduba.

Moghbeli wrote on Facebook about the event, saying, “Such a fun (day) at NASA STEM event tonight hosted by our (vice president) and (second gentleman)! I met so many students who were eager to perform test flights on their paper airplanes, iterate on their designs, and re-test. The evening left me with excitement for the future!”

Through NASA’s Office of STEM engagement, the agency makes investments in engaging students, educators, and educational institutions to attract diverse groups of students to STEM for a diverse set of students to contribute to NASA’s work and build a diverse future STEM workforce.

OSTEM’s Next Gen STEM project focuses on NASA’s efforts to engage K-12 students, including those traditionally underrepresented and underserved, and provides support to informal educational institutions.

NASA also engages and inspires the next generation through STEM collaborations as the country prepares for human exploration of the Moon. NASA’s Artemis program will land the first woman and the first person of color on the Moon, using innovative technologies to explore more of the lunar surface than ever before. NASA will then use what they learn to take the next giant leap: sending the first astronauts to Mars.