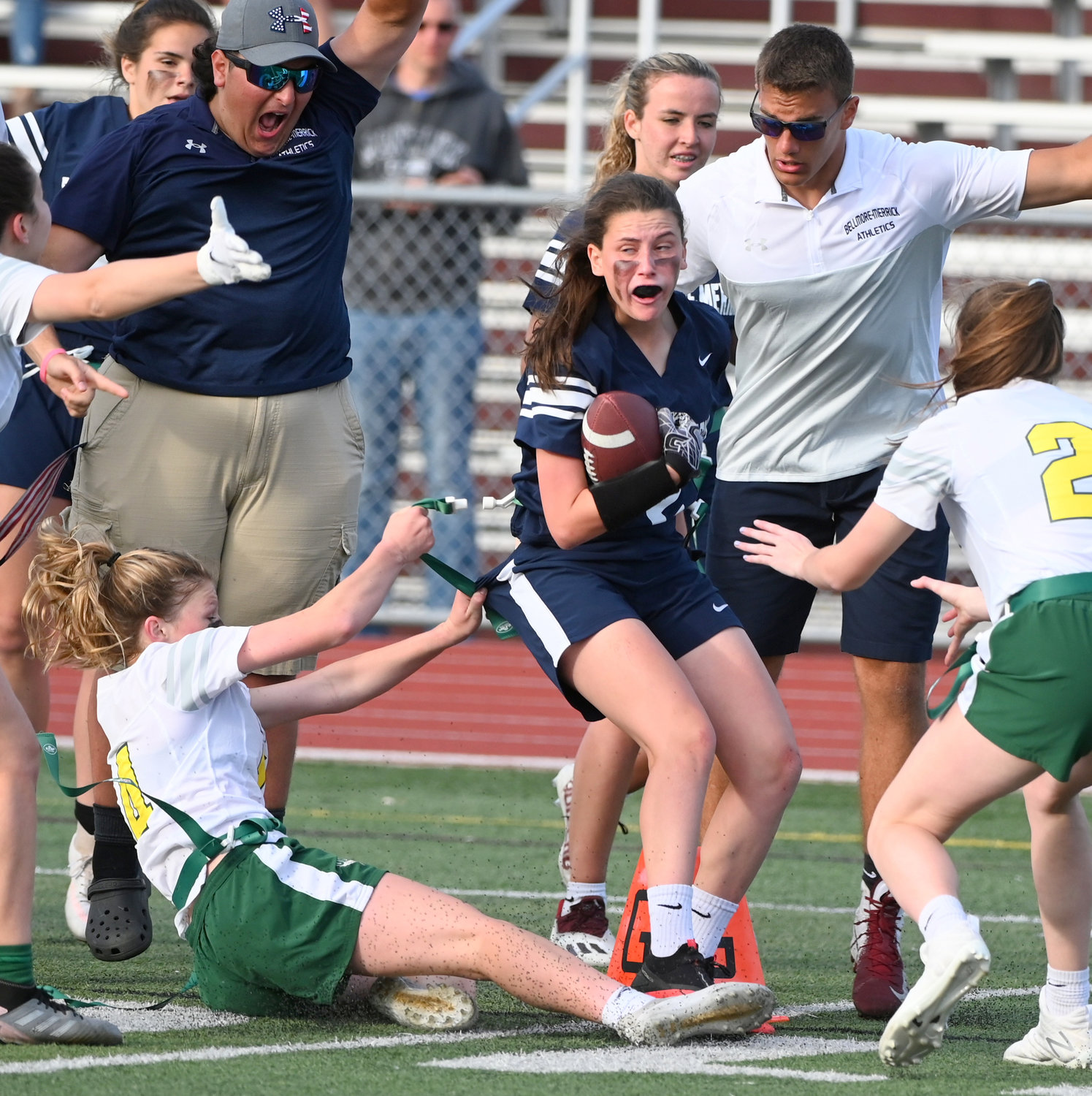 Flushed from the pocket with her intended target tightly covered by Lynbrook’s defense in the end zone on fourth down, Bellmore-Merrick quarterback Sofia LaSpina had to improvise fast.

“There wasn’t much time to think and no room for me to run,” LaSpina said. “I only had one choice.”

That option was Gabrielle Hanellin, who took a short pass from LaSpina from the 4-yard line and spun her way over the goal line for the eventual winning touchdown with 4:21 remaining as Bellmore-Merrick captured the inaugural Nassau County girls’ flag football championship with a 12-7 victory Thursday afternoon at Mepham High School.

An interception by Bellmore-Merrick’s Adriana Iemma thwarted the Owls’ final possession on a day when both defenses thrived. Kaelyn O’Brien and Amelia Doyle had interceptions for Lynbrook, which nearly turned the table on the Chargers after losing the regular-season meeting 41-22 just nine days earlier.

“We definitely battled some nerves and Lynbrook deserves a lot of credit for the adjustments they made and for giving us everything they had,” Bellmore-Merrick head coach Anthony Cracco said. “We trailed most of the game, but I’m so proud of how the girls hung in there and executed on the last drive.”

The Chargers (9-0-1) advance to play the Suffolk County representative — either Walt Whitman or Sachem East — for the Long Island crown on June 4 at 6 p.m. at the New York Jets headquarters in Florham Park. The Jets and Nike sponsored nine teams from Nassau that conducted an eight-game regular season beginning in late April.

Lynbrook, which eliminated Massapequa in the semifinals, finished 7-2-1.

“We threw a few wrinkles in today and were right there until the end,” Owls head coach Rob Kolb said after the title game. “It just came down to Bellmore making a few more plays than we did.

“It was an amazing season,” he added. “A lot of our girls play other sports but they were at 6 a.m. practices and really enjoyed a lot of success and being teammates.”

Bellmore’s championship-winning drive began with 7:49 remaining, set up by a long punt return by Madeline Ryan. LaSpina, who made national headlines last fall when she became the first female athlete to score a touchdown in a Long Island high school football game, connected with both Iemma and Luciana Setteducate for 20-yard gains to move the ball inside the Lynbrook 10.

Lynbrook’s defense, which was led by Kyla Nembach and Keziah Job, stood tall until fourth down when LaSpina took the snap from center Sophie Orlich and found Hanellin for her 34th touchdown pass of the season. Hanellin crossed the goal line a split second before her flag was removed by O’Brien.

The Owls, with Tyla Vuotto starring, scored on their opening possession. O’Brien’s 1-yard touchdown run and conversion pass to Katie Sharkey made it 7-0. It was 7-6 at halftime following Iemma’s 10-yard touchdown reception.

“We loved playing and gave it everything we had,” Nembach said. “It was a really cool experience.”