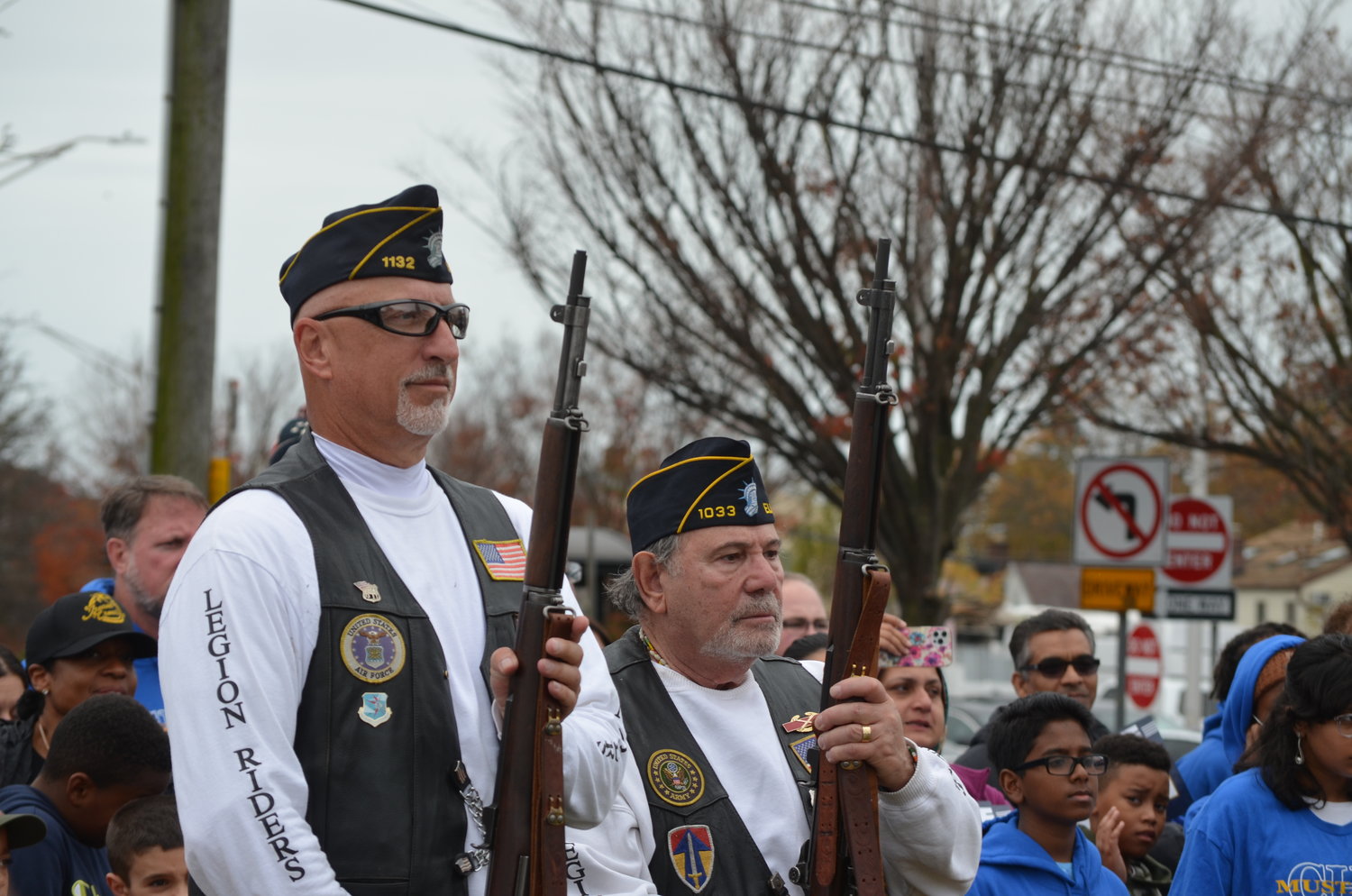 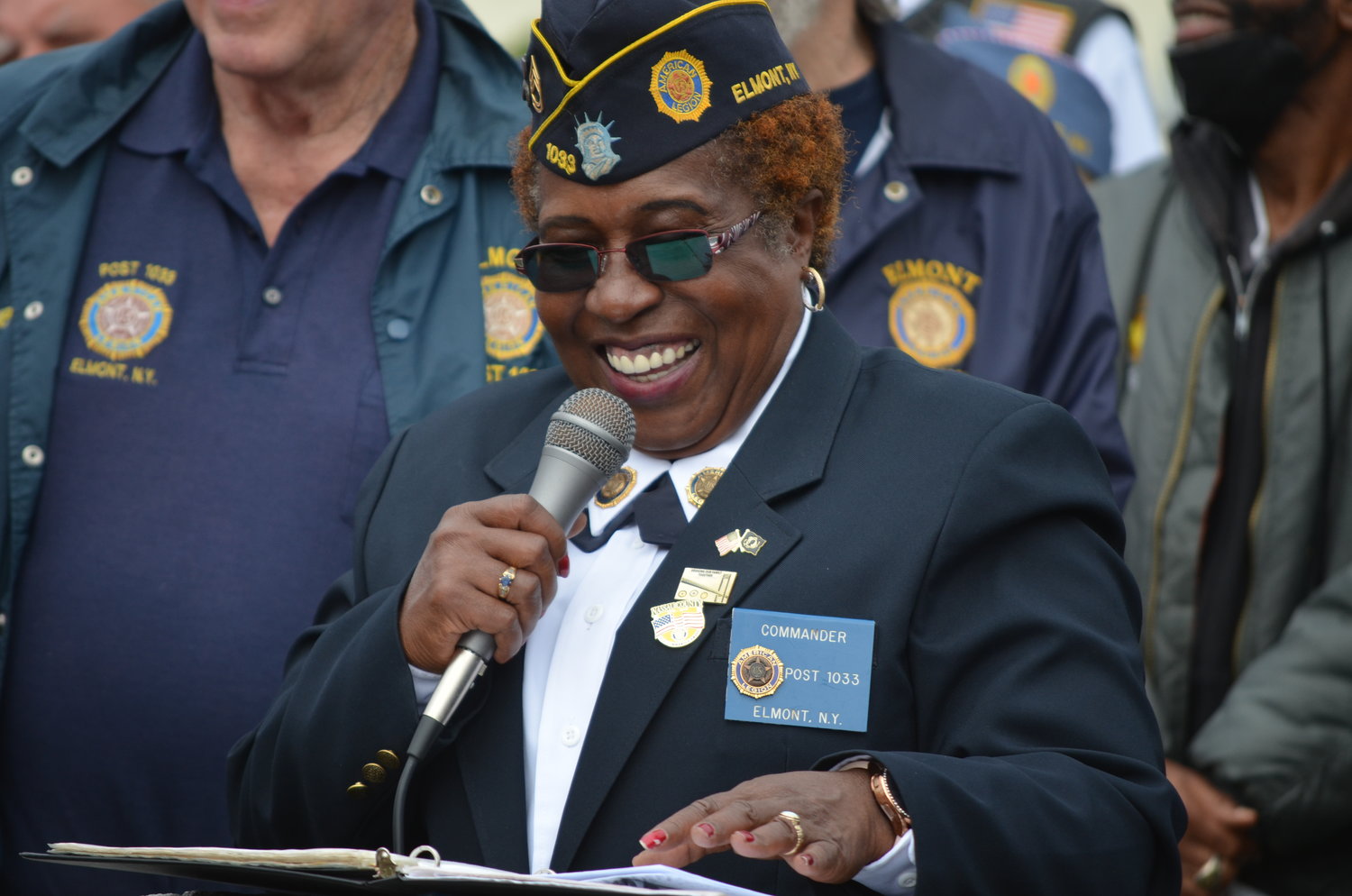 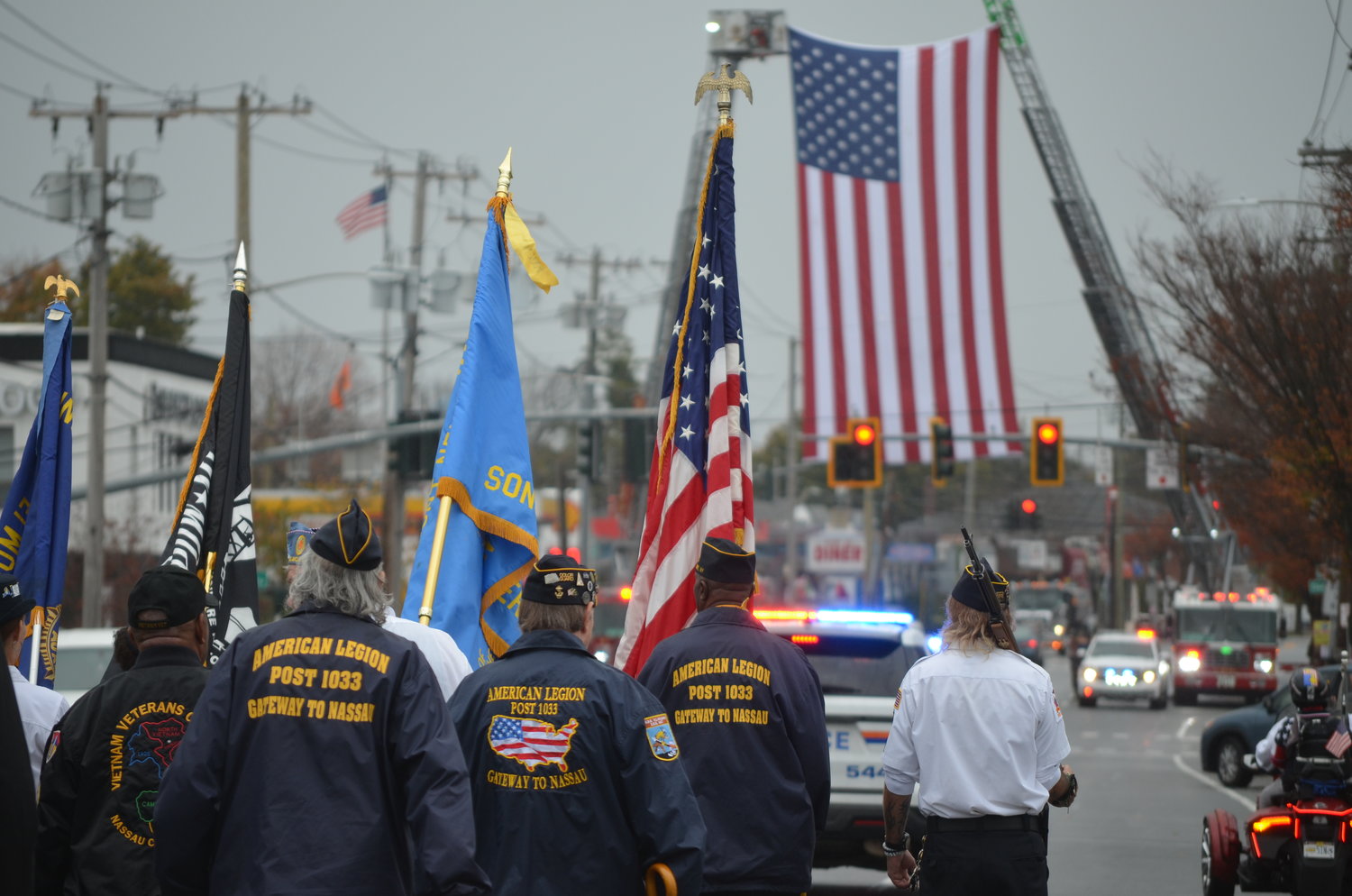 Parade participants marched down Hempstead Turnpike toward an American flag hanging in the distance.
Ana Borruto/Herald
Previous Next
By Ana Borruto

Hundreds of people of all ages gathered under gloomy skies to honor and thank veterans for their service during Elmont Post 1033’s annual Veterans Day parade last Friday.

Several elected officials, the Girl and Boy Scouts, the fire department, students of the Dutch Broadway Elementary School, Alden Terrace School and others marched from the American Legion building on Hill Avenue to Hempstead Avenue toward Veterans Square, at Covert Avenue and Hempstead Turnpike.

Once the marchers arrived at Veterans Square, Elmont Post 1033 Commander Lecia Rodriques-Whyte spoke about the meaning of Veterans Day and specific customs, such as the playing of taps for veterans who have died. The day before the parade, members of Elmont Post 1033 visited the participating schools and were welcomed with cards made by the students.

“In my opinion, as a grandmother, I know the more the children know about what a veteran does and the opportunities veterans have given them, the better they will understand,” Rodriques-Whyte said. “I’m not telling them to join the military, I just want them to understand why they have the privileges they have today.”

Rodriques-Whyte said the parade produces a great turnout each year, especially the first celebration after a COVID-19 hiatus, which featured twirlers, school bands and other performances that moved the post commander “to tears.”

She said she is grateful to be able to continue the Elmont Post 1033 parade tradition and bring it back to its original grand scale.

“I know the community supports us because the schools help us financially by doing all kinds of drives during Covid to keep (the Elmont Post 1033) building,” Rodriques-Whyte said. “I am so blessed and happy to live in a community like this that does so much for us.”

Ralph Esposito, director of the Nassau County Veterans Service Agency and organizer of the parade, said that when it comes to participation, the Elmont community does not hesitate to step up for a good cause.

“It’s all about harmony and respect,” Esposito said. “This is the best post on Long Island in my eyes. They go everywhere and do everything, and it means so much for us to have the community show up.”

Nassau County Legislator Carrié Solages addressed the crowd about the importance of recognizing the service of veterans, as well as other examples of leadership in their lives.

“My father is a veteran and it is the ultimate example of service to the community, to God and to your country,” Solages said. “He was an example to me of how to give back.”

Jillian Soute-Nelson served in the Gulf War 30 years ago and met Erica Hitch-Graham when they both served in the military in the same unit at the 808th Station Hospital. Another friend and fellow veteran of theirs, Sharran Chambers-Murphy, was coincidentally stationed at the same unit years before them, she said.

“It brings back memories, the camaraderie with coming together with people who actually know what we experienced as veterans, the ones who went to war,” Soute-Nelson said.

The veteran added that their service leaves a legacy for future generations to be inspired by.

“These are the future leaders and military personnel,” Soute-Nelson said. “(We’re) planting seeds in their brains and in doing that, they will look at us and feel proud.”