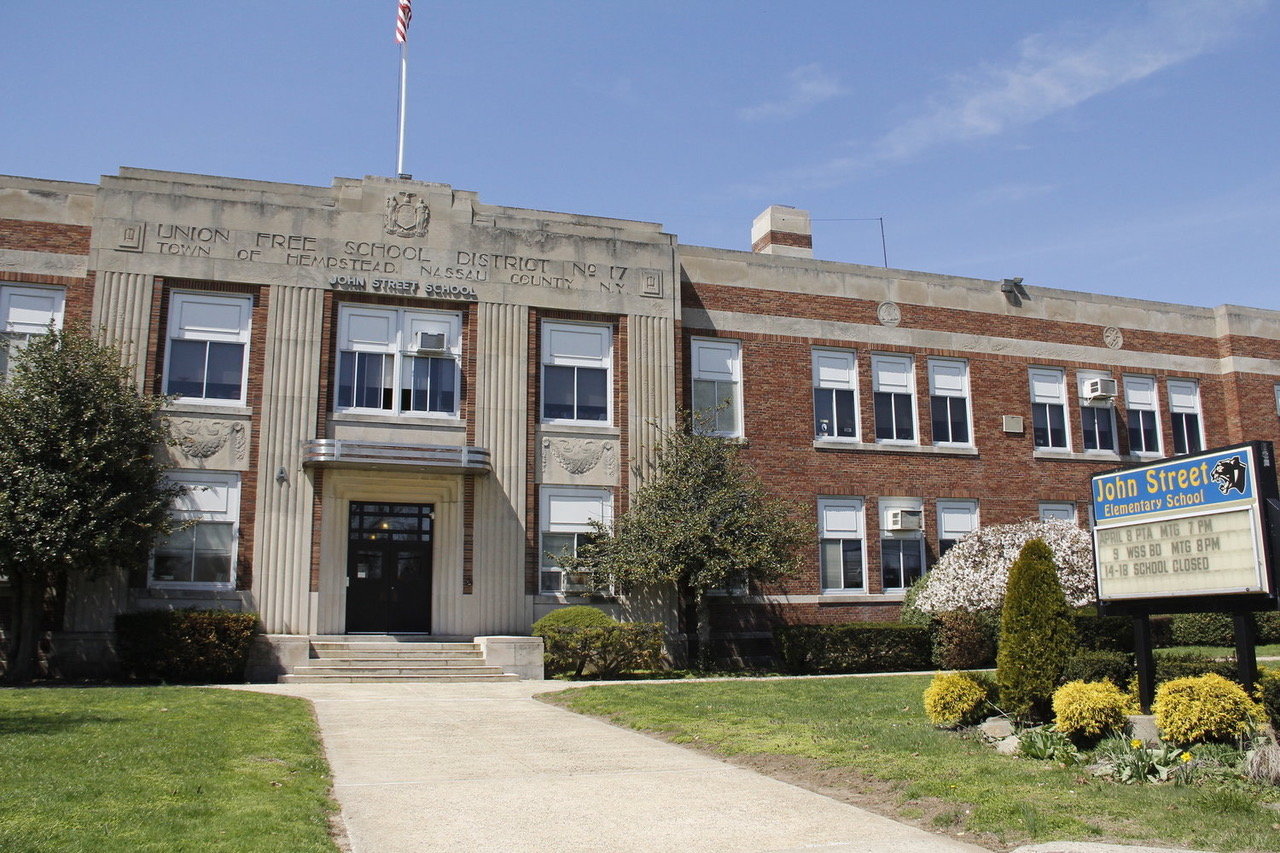 Money has been set aside for field and transportation center renovations at the John Street Elementary School, but won’t impact the district’s tax levy.
Christina Daly/Herald file photo
By Robert Traverso

School taxes are expected to go tick up slightly if voters approve the adopted Franklin Square Union Free School District Board of Education budget next month.

The school board plans to spend just over $44 million, this academic year, up 8 percent from last year. Members have called the budget a “commitment to provide an educationally enriching and safe learning environment.”

The typical school tax levy will rise 2 percent, although board members had wiggle room to go as high as just over 2.4 percent. With this new spending plan, all “current programs have been maintained in this budget,” officials said in a statement, “while giving back to the community during these challenging times.”

During their most recent budget presentation, district officials called for the addition of several new programs, as well as plans to both renovate and hire. This includes the addition of a district social worker and an additional support teacher.

There is also planned a program focused on daily living skills, as well as building maintenance funds, musical instruments for the district-wide band program, the creation of a district-wide theatre program, updates and renovations to the libraries at both Washington Street and Polk Street schools, additional security cameras, new buses, equipment for physical education classes and recess, and the creation of a daily living space at John Street School for the intensive support program that serves students with disabilities.

District-wide coding programs are set to continue, as well as science, technology, engineering and math programs, as well as literacy initiatives. The budget calls for an increased focus on supporting the wellbeing of students and families through social workers, behavior specialist and psychologists.

Technology advancements — including the replacement of aging technology and the hiring of additional technology support staff — are also included in the current budget.

The district announced late last year a plan to begin offering two full-day pre-kindergarten classes in September at John Street, Polk Street and Washington Street School, up from the one class currently offered at each school. But that plan could be nixed if voters reject the budget more than once. That would trigger a contingency budget cutting not only pre-K expansion, but also bus replacements and after-school programs.

Additionally, the budget calls for the beginning of planned renovations to the John Street field and transportation center. The first phase includes a total renovation of the fields, officials said, which would move the playground away from Nassau Boulevard and closer to the school building.

Officials stress, however, these John Street renovations will have no impact on the tax levy, since the money is coming from the district’s already-funded capital reserve.

The district also is depending on promised federal funds and a pledge by Albany to provide additional Foundation Aid, which takes into account the wealth of school districts as well as student needs as a way to try and provide some funding equity for schools.

While the budget calls for the addition of classroom support materials and resources, district officials stressed that education at Franklin Square schools is above average.

The district pointed to a statewide study discussed at a recent education board meeting showing Franklin Square students have made continuous progress on reading, math and early literacy, as gauged by the Star assessment, compared to other schools across New York and the United States.

“We are once again ranked among the lowest per-pupil expenditure in Nassau County, however our district spends among the highest on instruction,” the board reported in its presentation.

District Superintendent Jared Bloom did not respond to a Herald request for comment.