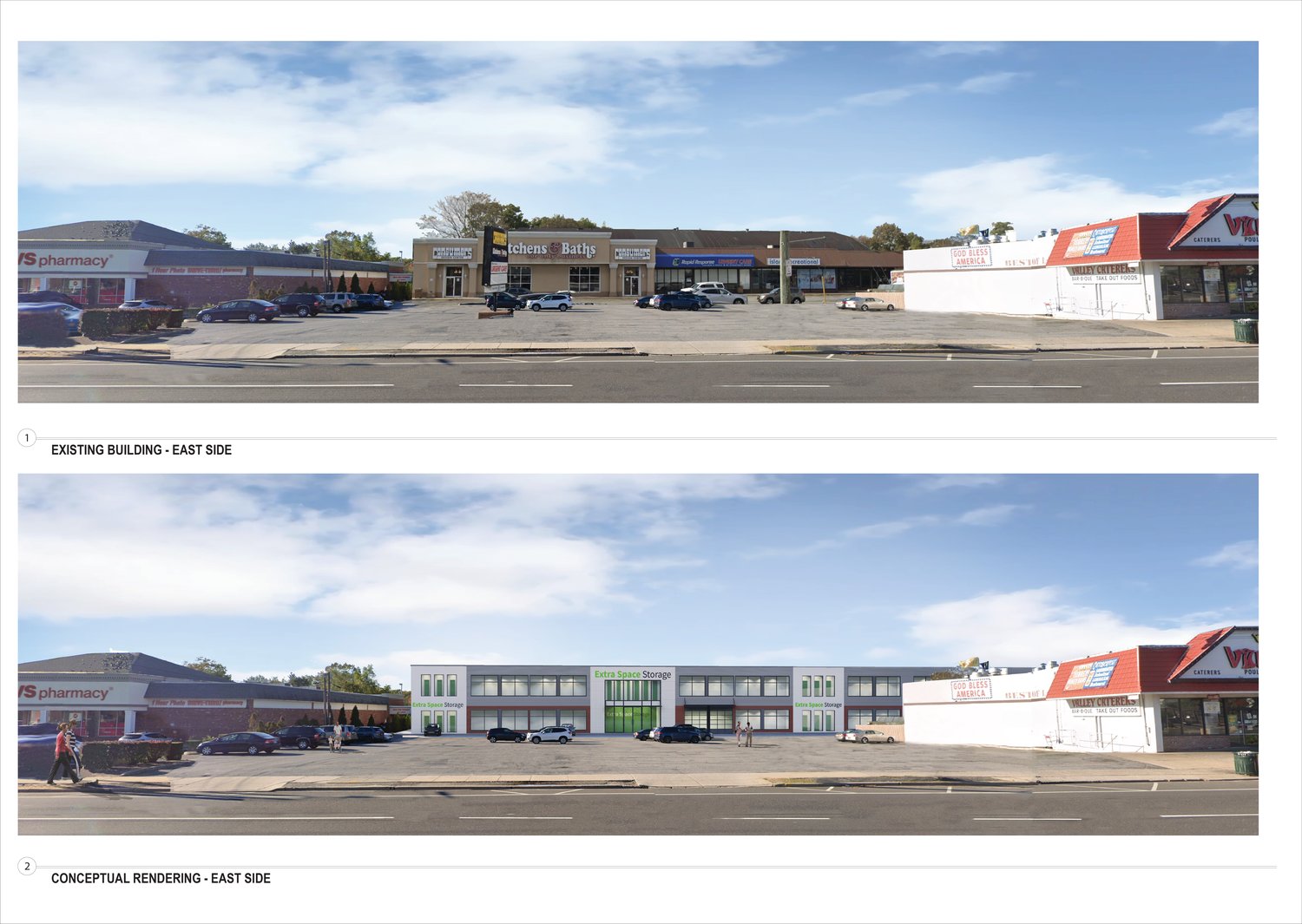 Attorneys for Nauman Hussain, who has proposed the three-story facility, created this simulated view of the project.
Courtesy Chris Browne
By Brian Pfail

Franklin Square residents have been waiting for over a month for a decision on the construction of a 3-story storage facility. Chairman David Weiss of The Town of Hempstead Board of Zoning Appeals (BZA) promised an answer within a month’s time from the July 13 public hearing before the zoning board.

The BZA said it does not speak on any ongoing matters, and this case has 62 days to give a determination, according to New York State Code Section 267-A. Furthermore, the matter can be extended by mutual consent.

The storage facility is intended to be built at 600 Franklin Avenue. The owner of the neighboring Synergy Fitness, Nauman Hussain, is spearheading the build and has already requested the necessary variances in order to knock down an existing building owned by the gym and rebuild.

NYS Assemblywoman Michaëlle Solages said she supports the residents and believes “that these storage facilities should be put in warehouse construction zones, and not supplanted into strip malls or places where” small businesses or microbusinesses can open up.

The Franklin Square Civic Association conducted a March 21 survey where 594 residents sided against the build, seven motioned in favor, and nine remained neutral.

Steve Dawideit, co-owner of Valley Caterers, originally said the facility would block points of access to his storefront for delivery trucks. Dawaideit said his attorneys reached out to Hussain’s and they are seeking a compromise that would not encroach on points of access for delivery trucks. As a result of Valley’s change of position, many residents are opting out and shopping elsewhere.

What was suggested to Hussain was to build the storage facility in a different location, potentially north of the lot behind Valley Caterers, where there is more space. A two-story configuration was also suggested thinking residents may be more open to a smaller structure.

“Residents are all opposed to a three-story storage facility,” said Lisa DelliPizzi, president of the Franklin Square Chamber of Commerce. “It’s going to affect the value of everyone’s real estate–it doesn’t belong on Franklin Avenue.”

“Most that I have talked to do not want it there. It’s an eyesore,” she said. “Also [it’s] a storage unit–anyone can rent it.”

DelliPizzi also said neighboring businesses have already been affected by the politicking. Valley Catering is starting to see its customers shop elsewhere after pledging support to the construction.

“It’s also going to affect the real estate values of the homes in the area,” she said.

Hussain isn’t new to such entanglements. In 2019, he attempted to build another three-story unit near the corner of Hempstead Turnpike and Franklin Avenue, causing residents to voice their opposition.

Chris Browne of the law office of McLaughlin & Stern, who represents Hussain, disagrees with the characterization of the build.

“A lot of the people that use these facilities are local businesses,” said Browne. “It’s not taller than what’s permitted by the Town of Hempstead. A house is allowed to be 30 feet tall.”

Browne has storage facilities being built in Oceanside, Levittown, and Elmont. He says there has been little uproar there, and in fact, these facilities pay hundreds of thousands of dollars in taxes that go into the school districts.

“At the end of the day, the community gets a lot more tax dollars at the site,” he said while adding the traffic congestion would be an almost nonexistent change.

Browne wishes the community would be more on board, hoping for more transparency on that matter as well as trust.

“I think that people will forget about this in a heartbeat because it doesn’t affect anyone. It’s totally benign,” said Browne. “It’ll make it look nicer. 99% of people in Franklin Square won’t even be aware of it unless you need a storage locker.”

His office of McLaughlin & Stern released a press announcement, cited below:

“We believe that the construction of the storage facility will benefit the commercial corridor on Franklin Avenue. We are very pleased that, as part of the re-development, we have reached an agreement with our neighbor Valley Caterers that will allow Valley’s customers to park in the parking lot of the storage facility and to enter and exit over our property. The agreement secures parking and access rights for Valley’s customers so that Valley will be able to operate successfully for years to come, and we are proud that Valley has given the project its full support. In addition, as part of the re-development, we will landscape the parking area in the front and around the building, beautifying both the storage site and Valley Caterer’s property, and adding greenery to the area along Franklin Avenue for the first time.”