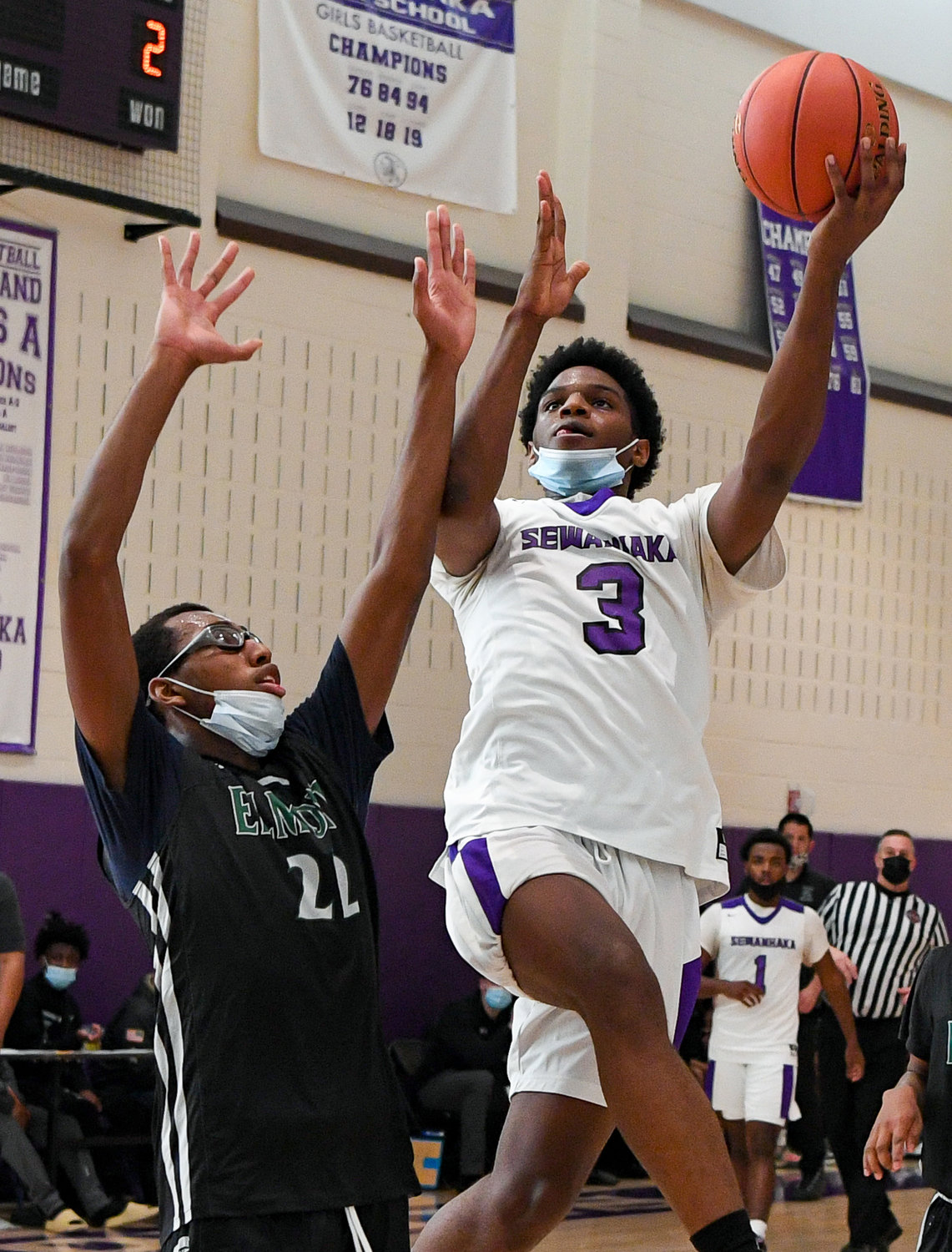 While the game was more competitive than the score implies, Sewanhaka earned a sizeable boys’ basketball victory over visiting Elmont last Saturday, 72-46, thanks to a steady offense that produced at least 16 points in every quarter.

The outcome was mostly settled in the first half, as the Indians took a commanding 37-12 lead into intermission. Sewanhaka head coach Jay Allen was thrilled with how his team looked and played coming out of the gates.

“As far as our energy in the beginning of the game, I think our guys came out and played hard,” Allen said. “We got hit hard over Christmas break, so I think our guys are hungry now that they’re getting a chance to play.”

That hunger and passion was evident in the first half, as the Indians controlled every facet of the game. Their defense was stifling, and when they weren’t forcing turnovers, they were contesting shots at the rim.

On offense, they displayed a good mixture of getting in the paint and shooting from the perimeter Senior Chris Cherry had 17 points and went 3-for-3 from behind the arc. Senior Kamren Denhart helped set the up-tempo pace, as his 12 points came almost exclusively from fast break layups.

The second half wasn’t as seamless for the Indians, but the team was able to mitigate any runs from Elmont, with a lot of the credit going to senior J’Den Lloyd. He was the game’s high scorer with 28 points, with 20 coming in the second half. His combination of power and touch was unstoppable at times, and Allen was elated with how Lloyd performed.

“J’Den is our biggest strongest guy,” Allen said. “He’s essentially a guard but has to play forward for us. He was really aggressive today. He put his shoulder down and got to the rim the entire game. We’ll take our matchups with J’Den against any team.”

Sewanhaka (4-4 overall) will look to build upon the win when it takes on red-hot Calhoun.

For Elmont (2-6), the game was a tale of two halves. In the first half, they appeared outmatched and uninspired, but in the second half they were rejuvenated, partly due to a schematic change. The team implemented a suffocating press coming out of the half which generated numerous turnovers. While the final result wasn’t ideal, head coach Ryan Straub saw positive takeaways from this game.

“We didn’t quit,” Straub said. “Second half we picked up the intensity. It’s not easy to go down such a big margin but it says something special about these guys that they kept fighting.”

Senior Giovanni Pierre-Chrispin had 10 points for the Spartans, mostly coming from hard fought-buckets down low. Sophomore Osagie Ehkator also had 10 points, including a dunk. Junior Girell Frias-Walsh had 9 points and was a defensive catalyst as well. Junior Davidson Ba Lafortune also was a core weapon in the second-half press, while also providing 7 points.

The Spartans will look to get back on track this week when they face Glen Cove and Roslyn.