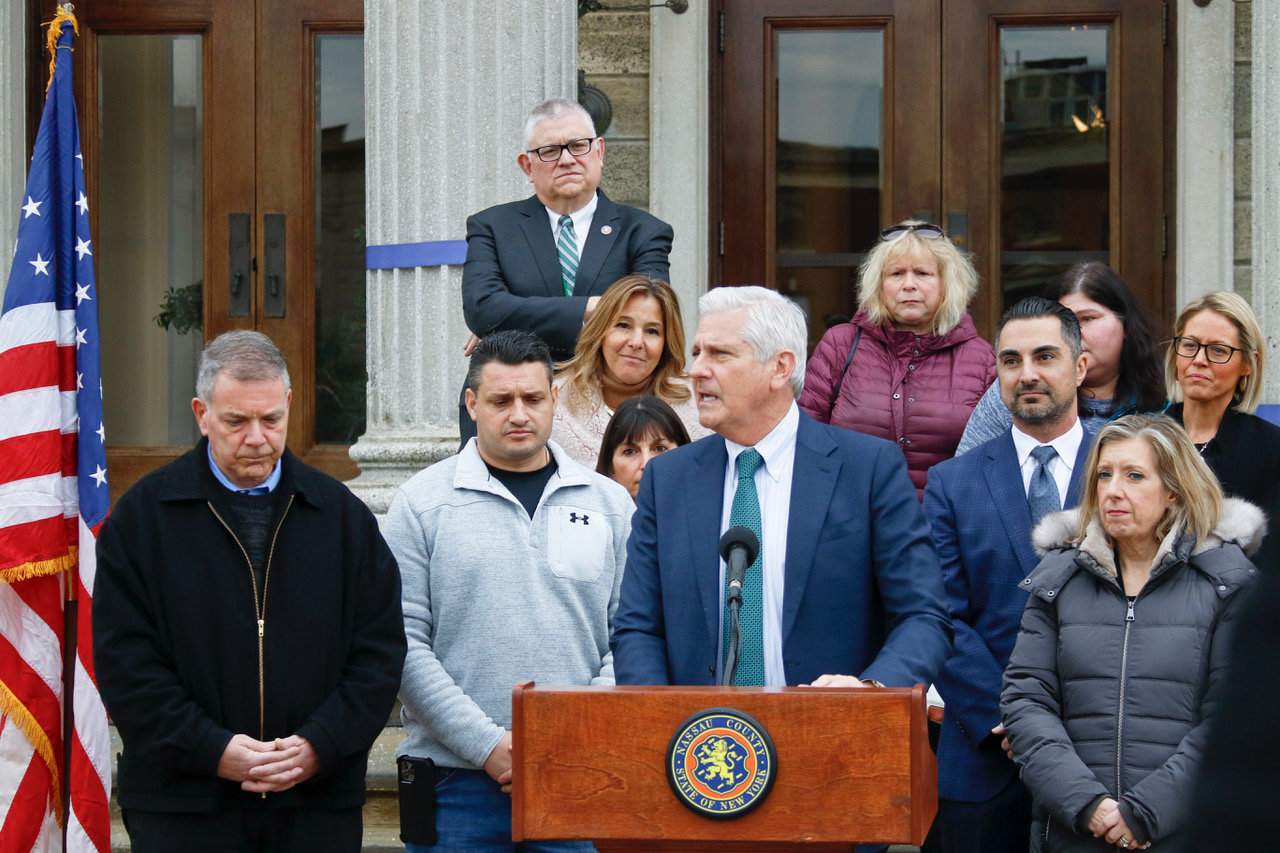 Nassau County Executive Bruce Blakeman urged Governor Kathy Hochul to not pursue a suspension of a state supreme court judge's ruling that struck down her mask mandate for schools prior to the suspension being issued late Jan. 25.
Herald/Christina Daly
By Robert Traverso

A New York State Supreme Court judge released a ruling on the evening of Jan. 24 that struck down Governor Kathy Hochul’s mask mandate for schools across the state, deeming the order unconstitutional, but a division of the state appellate court system issued a stay -- or suspension -- of the judge’s action late Jan. 25, rendering the mask mandate still in effect.

The state’s first appeal, of two total, of the ruling led to confusion on Jan. 25 across Nassau County schools about whether or not this automatically meant mask-wearing was still required in schools despite the ruling that struck down the order.

In a statement released on the morning of Jan. 25 on its website, the Elmont school district said Elmont schools would continue to enforce the mask mandate. The Franklin Square district released a statement early Jan. 25 that said it would stop enforcing the mask mandate in light of the judge’s ruling; the district and superintendent did not respond to a request for comment before publishing time, following the suspension of the ruling. The Sewanhaka Central High School District and its superintendent also did respond to a request for comment as of Jan. 25.

“I'm sure that parents and educators are equally frustrated about the conflicting guidelines we continue to receive during the pandemic. We will continue to be in contact with parents and the community as more information is shared and legal opinions are formed,” the Elmont district said in the pop-up message posted to its website early Jan. 25. “Until we can get clarification from the State Education Department, the mask mandate remains in effect for the Elmont UFSD.”

The Elmont school district did not respond to a request for comment after the announcement of the stay issued on the judge’s ruling.

The New York State Education Department (SED) issued a statement early Jan. 25 addressed to all school districts statewide that said it would appeal the judge’s ruling. “The Department of Health will appeal the Nassau County Supreme Court decision, which will result in an automatic stay that will unambiguously restore the mask rule until such time as an appellate court issues a further ruling. Therefore, schools must continue to follow the mask rule,” the statement read.

In his ruling, the judge, Thomas Rademaker, said he did not rule on the "efficacy" of mask wearing. Rather, Rademaker said he ruled on procedural grounds, deeming Hochul’s mask wearing requirement for public spaces unconstitutional because a state of emergency had not been declared.

Because a state of emergency was not declared, Rademaker argued, the governor should have sought permission from the state legislature to enact the mandate, which Hochul did not. Rademaker said in the ruling that the order is illegal because it was implemented through a state agency, the Department of Health.

New York State, through state attorney general Letitia James, issued its first appeal of the judge's ruling earlyJan. 25. Some legal experts said then that the state’s initial appeal would lead to an automatic suspension of the ruling. Others who disagreed, however, said the stay needed to be put in place by a state appeals court hearing, which would be triggered by a second appeal of the ruling filed by the state.

The state filed a second appeal during the afternoon of Jan. 25 and a hearing was later held in a state appeals court, leading the stay on the ruling to be issued afterward.

Nassau County Executive Bruce Blakeman, who urged Hochul to drop the state's pursual of a stay prior to the ruling's suspension, released a statement late Jan. 25 decrying the suspension of the ruling. “It’s time for the Gov to stand down and stopl,,,,. disrespecting the rights of students and parents. Mask decisions should be made by families and school boards. Not Albany politicians,” Blakeman said. “Nassau is normal again and we will continue to lead the way as an example for the rest of the state.”

In a tweet released late Jan. 25, Hochul reacted to the issuing of the stay: “I… applaud the Appellate Division, Second Department for siding with common sense and granting an interim stay to keep our state’s important masking regulations in place,” Hochul said.