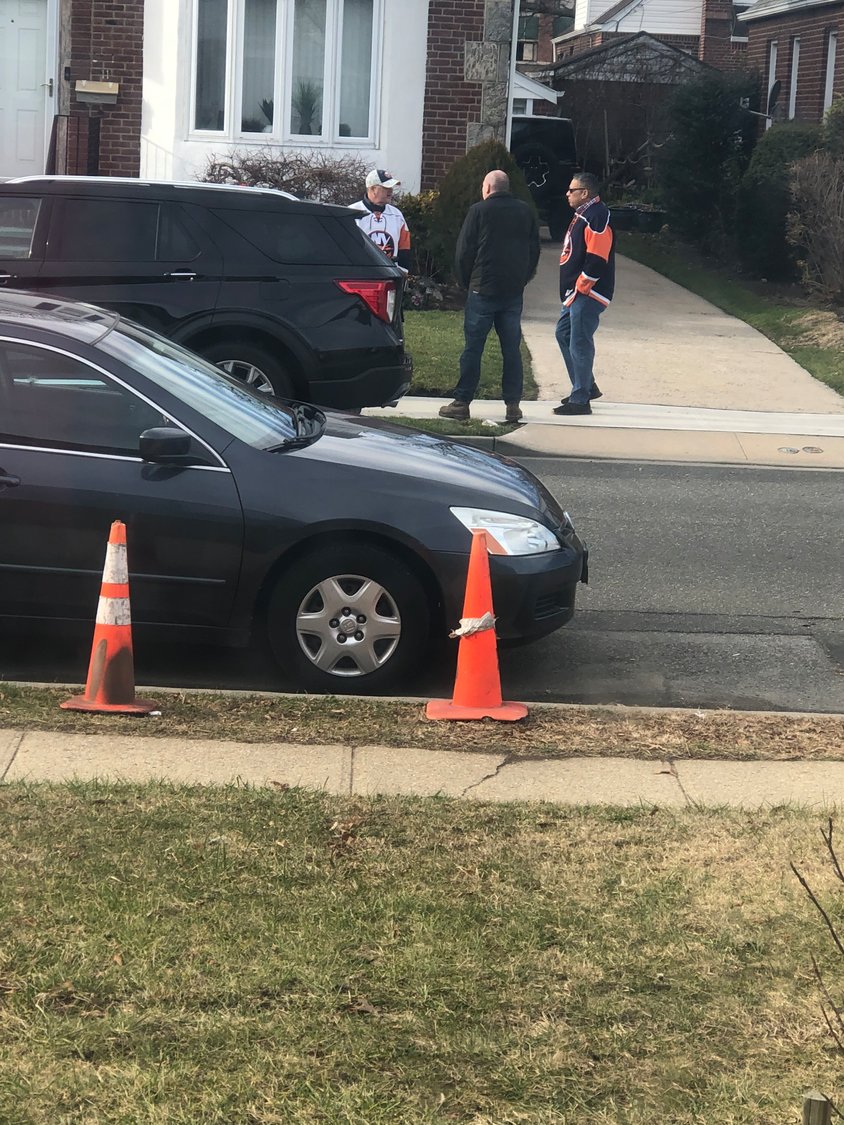 Elmont homeowners say that when they come home from work, they often find their driveways blocked by the vehicles of those attending night events at the UBS Arena.
Courtesy Locustwood-Gotham Civic Association 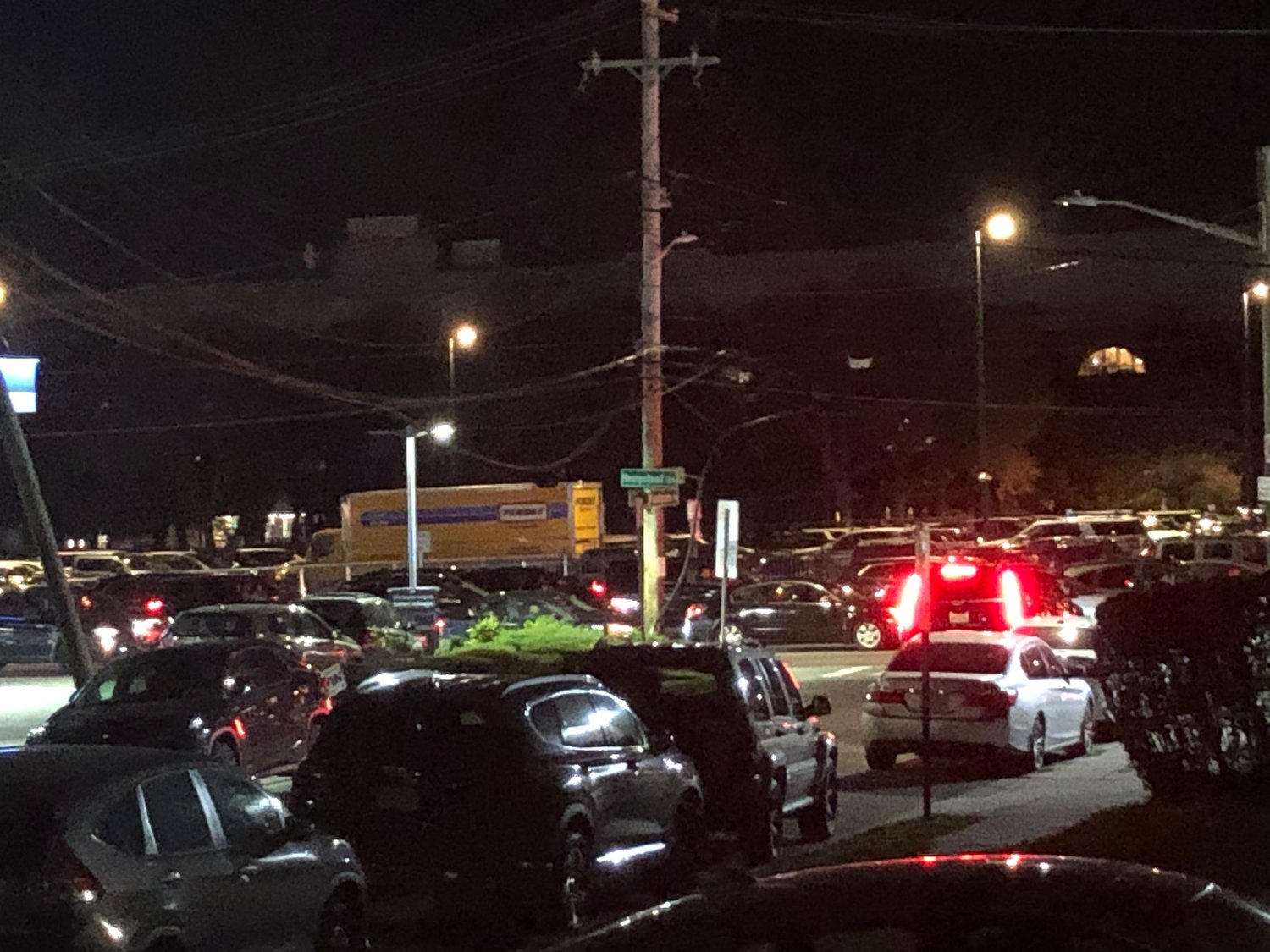 We can’t pick [the arena] up and put it someplace else. We have to remedy this situation”
Bob Barker, President, Locustwood-Gotham Civic Association
By Robert Traverso

No space for ambulances during emergencies. Car horns blaring at midnight. Intoxicated people urinating on front lawns.
This is the scene three to four nights a week on the streets of Elmont across from the new UBS Arena, which opened two months ago, as described by residents of the blocks now crowded by the parked vehicles of arena-goers.
Parking signs enforced until Jan. 1 restricted parking on streets across from the arena between 10 a.m. and 4 p.m. Arena patrons frequently parked on the streets and waited until after 4 to walk to the venue to avoid paying for parking said Bob Barker, president of the Locustwood-Gotham Civic Association of residents who live near the arena.

The signs, Barker said, have no effect on parking for night events, which usually start at 7 p.m.

There is frequently congestion on Hempstead Turnpike, which runs past the arena, when events end and people begin crossing the road to return to their vehicles. State Assemblywoman Michaele Solages said this led to “pandemonium” after the first New York Islanders home game in November.


Barker described an influx of parked cars that has prevented residents from getting in and out of their driveways and, in some cases, kept from emergency vehicles from reaching homes.
Community leaders and residents said they predicted this would happen months ago. “This issue didn’t happen overnight,” Solages said, adding that arena parking fees of $30 to $50 all but guaranteed that Islanders fans and other arena-goers would park on nearby streets instead.
Tiffany Capers, an Elmont activist, said the main issue is visitors’ “disregard for property.” Residents, Capers said, have told her stories about intoxicated fans urinating on their lawns after games and throwing trash out of their cars onto their streets.
Describing Elmont as a “working-class community,” Capers said that residents have told her that when they get home from work at 5 or 6 p.m., their driveways are blocked by arena patrons’ vehicles. “There is total disregard for these people and their homes,” she said.

SUB: New parking rules
The Town of Hempstead accepted a recommendation from the community at a hearing on Dec. 21 to change local parking requirements and erect new signs across Elmont. A permit, available from the town clerk’s office with proof of residency and car registration information, is now required to park on these streets.

The new regulations, Solages said, should significantly reduce the number of cars parked on the streets near the arena, but she added that enforcement would be essential.
Barker said the solution to the parking issue must include not only police enforcement, but also the completion of an arena parking garage, which is scheduled for spring. “We can’t pick it up and put it someplace else,” he said of the arena. “We have to remedy this situation.”
Barker was set to meet with Nassau County Police Commissioner Patrick Ryder this week to discuss the parking situation, but some residents said they were concerned that the police would be unable to effectively enforce the new regulations. “People are still doing what they want to do,” said an Elmont resident who asked for anonymity, adding that many arena-goers will simply pay the $90 fine. He stressed that while police were doing a “9 out of 10” job overall, officers from the Nassau County Police Department’s 5th Precinct, which encompasses the arena, have told residents they are understaffed and therefore need to focus on policing rather than ticketing.
Although police have blocked access to these streets by arena patrons during the first two months the venue has been open, the effort is ultimately “insignificant,” Capers said, because drivers have found other ways to access them.

SUB: Quality-of-life issues
Barker described the parking issue as one affecting quality of life. He added that he believed this would not be an issue in a non-majority-minority community. “In Nassau County, every community should be treated fairly and with respect,” he said.
Another resident, who also asked for anonymity, said she works from home, near her living room window, and cannot take client calls in the evening due to the continual honking of horns amid the congestion on Hempstead Turnpike.
Barker said many Elmont homeowners are upset that Elmont is being “transformed” from a tranquil suburban community into a traffic-choked area similar to Brooklyn or Manhattan.
“This is diminishing our quality of life,” said one of the two residents who asked for anonymity, also expressing concerns about forthcoming parts of the Belmont Redevelopment Plan that he said would making the situation worse.
“We’re not just upset at the Islanders or their fans, and we have no problem with the arena,” the resident explained. “Our frustration is not with the police. This is not a racial thing; this is not an Islanders fans thing. We are frustrated overall with the situation’s impact on our day-to-day life and having to live here and go through this.”