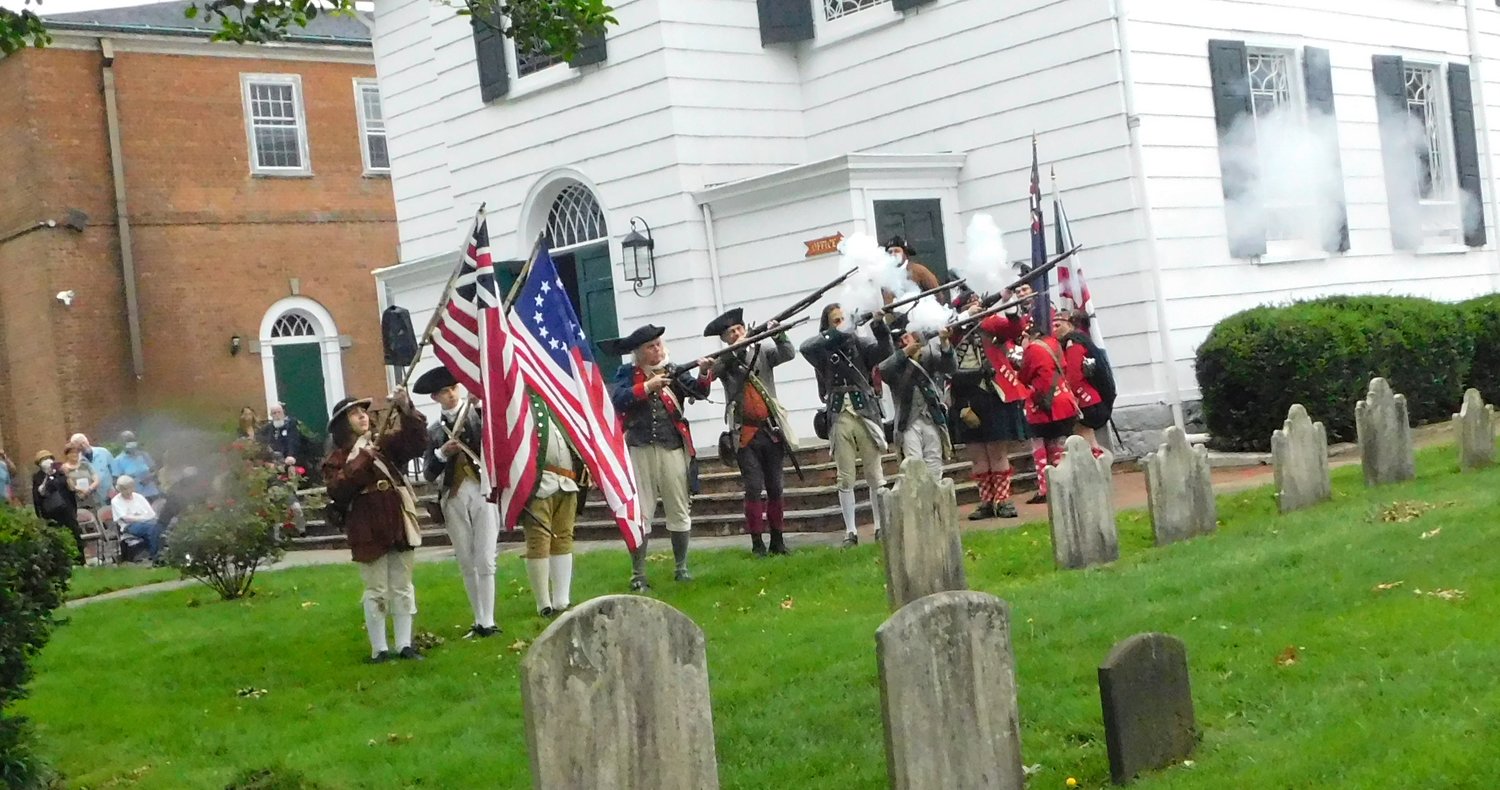 The 3rd NY Regiment reenacted the firing of muskets on the grounds of St. George’s Church in Hempstead during the American Revolutionary War. To the viewer’s right, representing the British redcoats, are the reenactment members of the 42nd Highland Regiment.
Reine Bethany/Herald 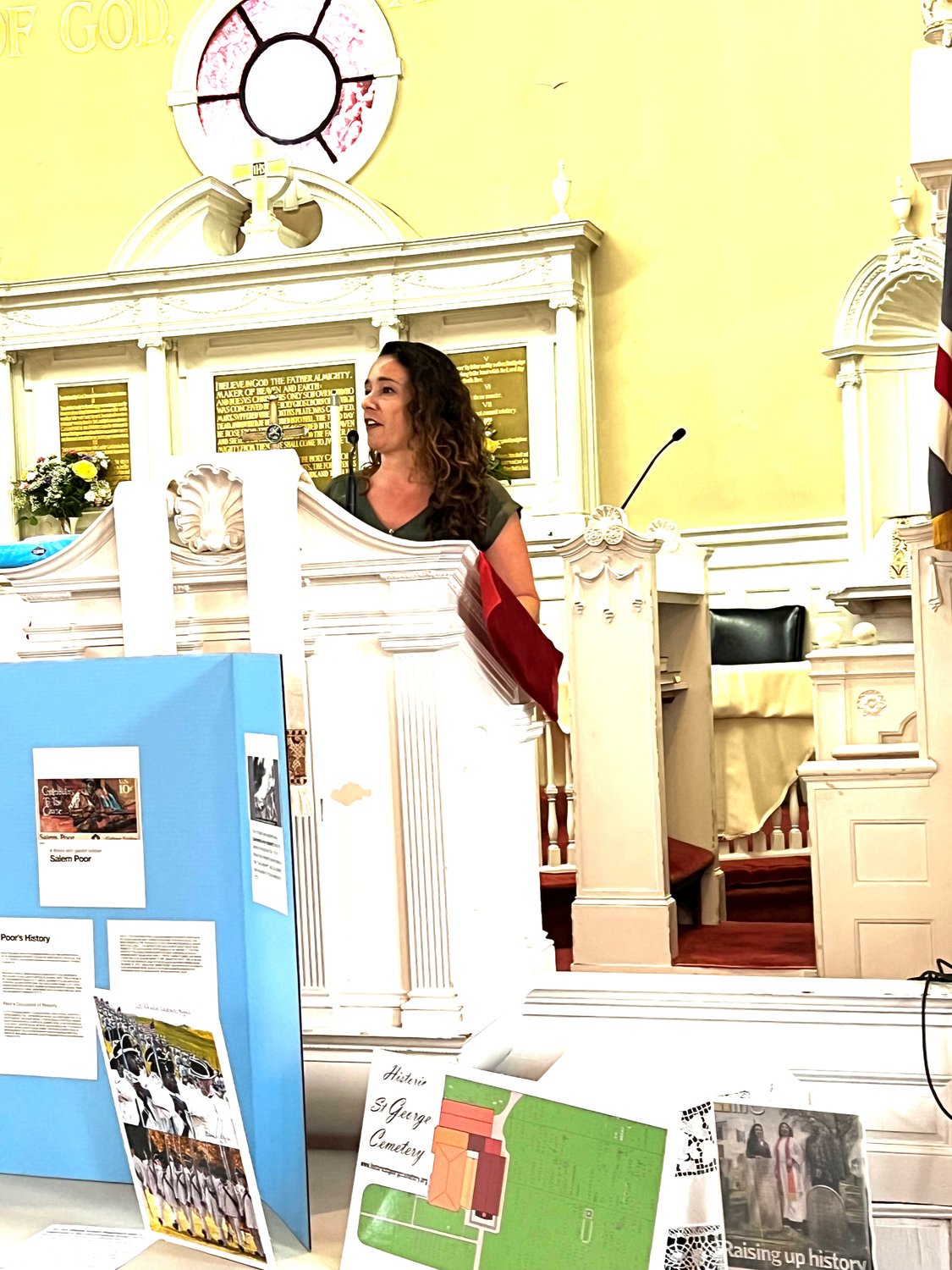 Historian Amy Vacchio, director of Rock Hall Museum in Lawrence, explained the massive project she has started, mapping the 700+ historic graves in the St. George’s churchyard and aiming for eventual restoration of the grave markers. The churchyard will become a walkable historic site.
Reine Bethany/Herald

Justin Constantino, far right, told the story of the occupation of St. George’s by American and then British troops, while Rev. Ajung Sojwal, center, and audience members looked on.
Reine Bethany/Herald
Previous Next
By Reine Bethany

The reenactment took place on Saturday, June 11. Representing the Yankee troops of the American army were members of the 3rd NY Regiment, wearing green-gray or blue woolen coats, breech pants with stockings, leather shoes with buckles, and dark tri-corner hats.

The British side was represented by reenactors of the 42nd Royal Highland Regiment, also known as the Black Watch, wearing bright red wool coats, black kilts, red-and-white plaid knee socks, and round black caps with silver-and-red bands and a black feather.

These two living history groups held their reenactment at St. George’s because, historically, the church had been occupied first by the Yankees early in 1776, then by the redcoats from mid-1776 until 1783, when Britain finally recognized an independent United States of America.

The program was to start at 1:00 p.m., but an unpredicted rain shower sent the reenactors and their audience scampering into St. George’s 1822 chapel, where they admired the boxed pews, the raised blue-pink-and-gold altar, and the tall white oaken pillars that uphold the balconies.

Near the steps leading to the altar, Testa arranged a pictorial display of a Black soldier named Salem Poor, who served with distinction in the 1st Rhode Island Regiment.

The 1st Rhode Island Regiment was the first to enlist Black soldiers for the American side, in January 1777. It too has a reenactment group, who could not attend, but videos of the group are posted on YouTube.

When the rain eased, everyone returned outside to the flagstone walks outside the church. First, the 3rd NY Regiment marched around the long white fence surrounding St. George’s graveyard, and up the front walk, representing the Americans who occupied the church early in 1776. They had come to demand that Hempstead give up its loyalty to King George III and fight the British. Gary Vorwald played “Yankee Doodle” on the fife, its notes forcefully piercing the air.

Rev. Ajung Sojwal, rector of St. George’s, represented the Rev. Leonard Cutting, who pastored St. George’s during the war. Constantino symbolically commanded that preaching loyalty to Britain should stop: “You are to cease teaching to these Tory rebels in this community! We are going to take over your church and we are going to dine on your communion table! Afterwards, you will only preach the good word to the Patriots in this community! Do you understand?”

Then came the brilliant red coats of the 42nd Royal Highlanders, led by Lt.-Col. Michael Grillo, marching to a British tune that Vorwald played on the fife, representing the British route of American troops late in 1776.

Rain once again chased the reenactors and their audience inside. Settling into the pews, the audience heard more war history from Testa, and specific history about St. George’s from Reine Bethany, a warden of St. George’s and also the Hempstead village historian.

Amy Vacchio, director of Rock Hall Museum in Lawrence, finished the program. With archivist Matthew Longo, Vacchio has mapped the 700-plus graves in St. George’s churchyard. The list of names is accessible at HistoricStGeorgeCemetery.org.

Vacchio has researched the Martin family, who occupied Rock Hall in the 1700s, and who attended St. George’s.

“The Martins would actually take a horse and buggy here, a two-hour ride from their house, to come to this establishment every Sunday,” Vacchio said.

The last surviving member of the Martin family, Alice Bannister McNeill, was baptized, married, and buried at St. George’s. Her gravestone, cleaned to a shining white by Vacchio, still stands in the churchyard.

At the end of the program, richly informed of the heritage in their midst, the audience members clustered with Vacchio, Bethany, Rev. Sojwal, and the living history reenactors, who are all walking encyclopedias of Revolutionary history, and faithful in details, down to hand-sewing their costumes to preserve the authenticity of their historical work.