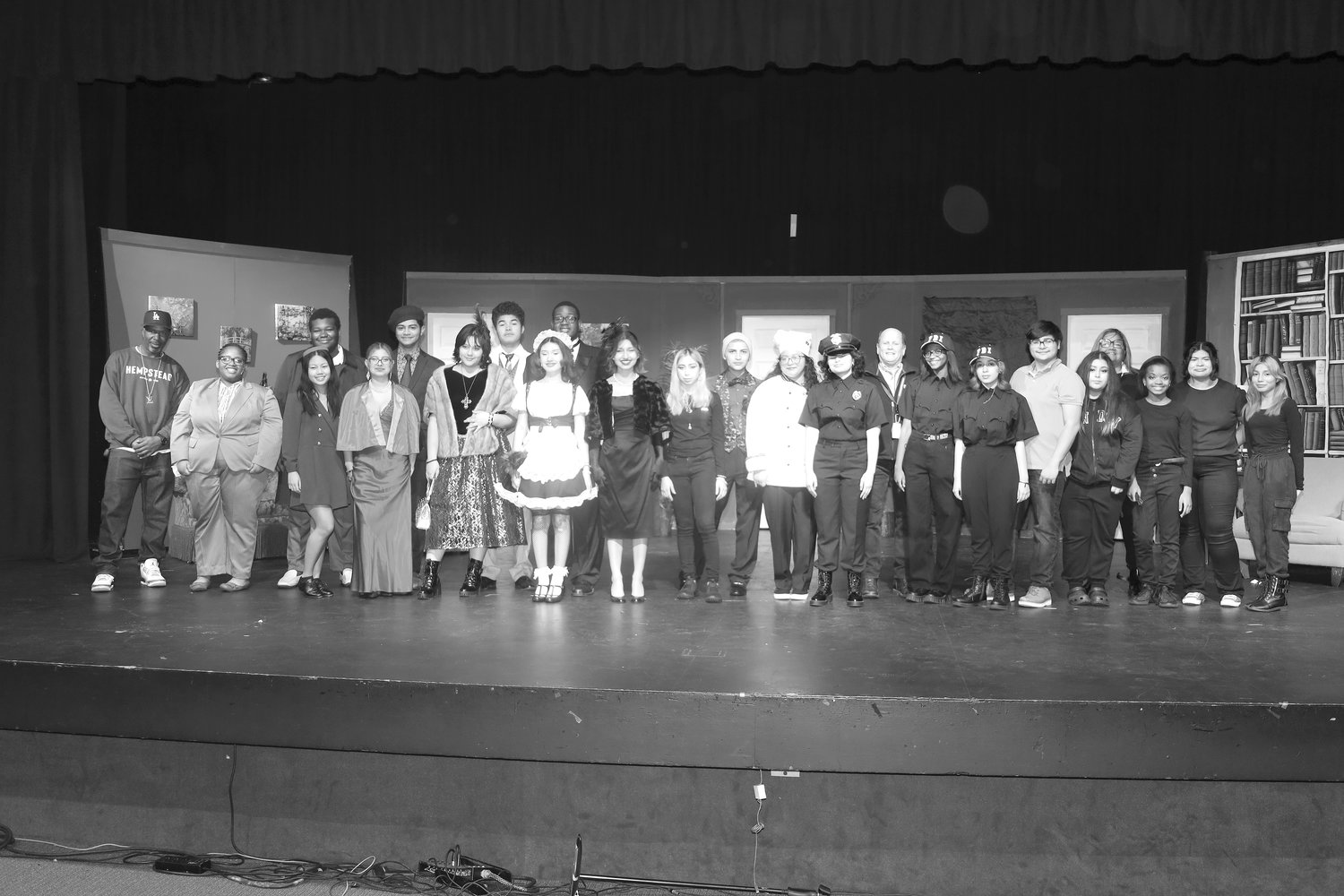 The cast and crew of “Clue” at Hempstead High appears in this photo with director and theater instructor Timothy Dolan, ninth from right.
Courtesy Gary Battle 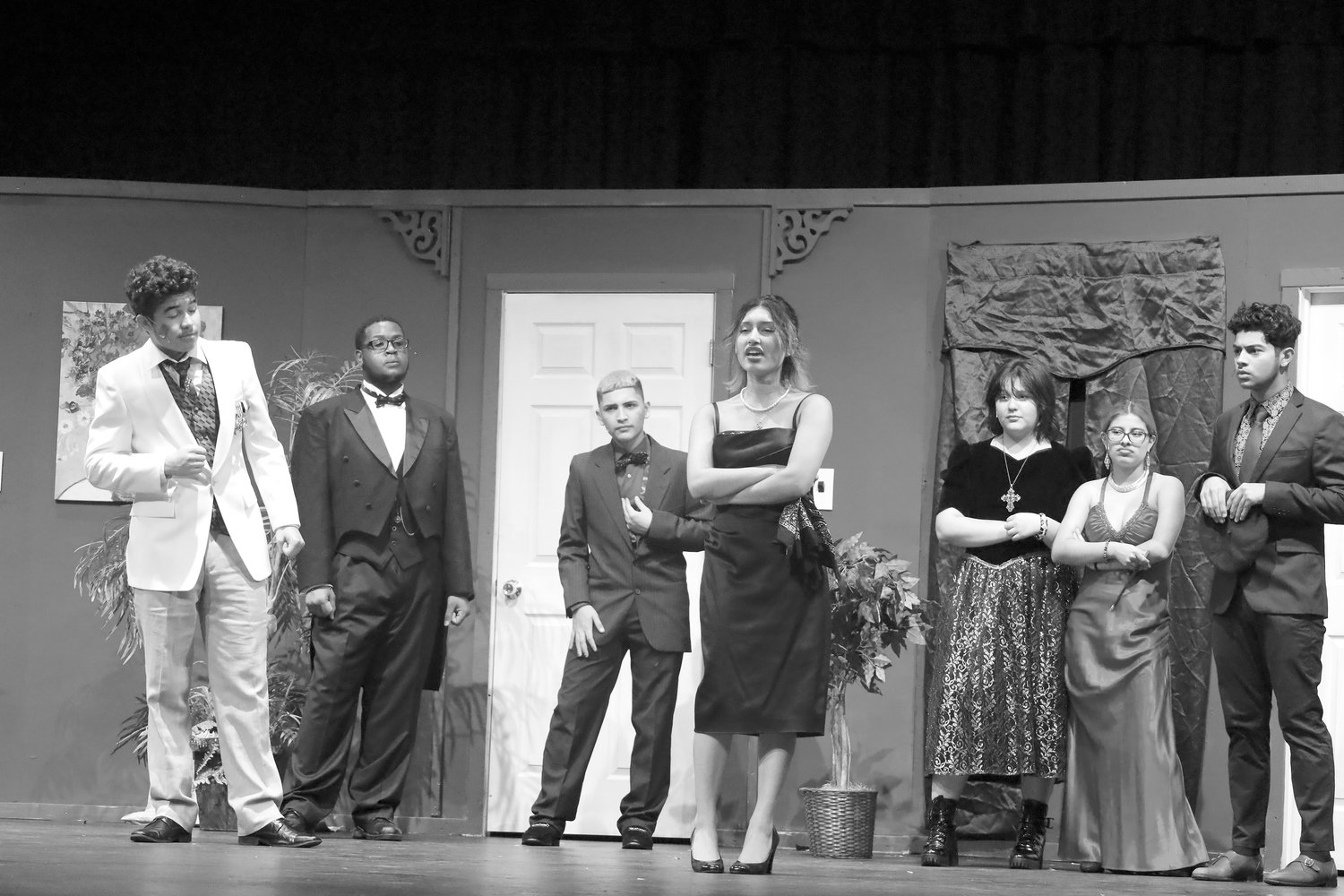 The Hempstead High School production of “Clue” this past weekend truly was funny, and very well done.

“Clue” is based on the famous board game of the same name. The play demands snap timing, relentless energy, and the capacity to enact complete absurdities without breaking character.

The Hempstead High students delivered it all last weekend. Jehki Whitfield in the lead role of Wadsworth started the first scene with humorous pomp, setting the tone for the wacky events that followed.

The comedy intensified with each character’s entrance. An outstanding aspect of the Hempstead High production was the distinctiveness of each character, from the seven lead characters to the stage crew that doubled as FBI agents.

Take for example Dion Pruitt’s Motorist, who said barely two words before an arm reached from offstage and clobbered his head with a wrench. He dropped into a chair in a dramatic death pose, holding absolutely still for so long that his character contributed as much as if he had a speaking role. When the Motorist character returned belatedly after a scene change, looked around, and crashed back into the pose, he evoked shouts of laughter.

The professionally painted set was cleverly designed to change scenes in absolute darkness with minimal movement of pieces. The stage lighting and sound production, with but few glitches, supported the action just as they should: by not drawing attention to themselves.

Lynn Ciorciari’s costumes added polish and definition to each character while allowing for the broad gestures and wild movement that the script required.

The first act was comical. The second act was hilarious. The actors repeatedly unified into groups and fragmented into action with the speed of a demented relay – a quality that is achieveable only with intense concentration and a lot of rehearsal.

The audience's applause and laughter reflected the vitality flowing from the stage.

“Clue” was directed by Hempstead High instructor Timothy Dolan, a local actor with over 20 years of experience teaching theater throughout Long Island.

“We have some very talented kids in this district,” Dolan said, noting that all of the production members were fully vaccinated and had rehearsed wearing masks. “We’ve been in rehearsal for over two months. We have all four grades in the cast [freshman through senior]. I’d say three-quarters of the actors are first-timers.”

The pandemic cost the theater department nearly two years’ worth of trained young actors, Dolan said. The spring 2020 production of “Hairspray” was canceled by Covid-19 shutdowns, two weeks before its scheduled performances. The students who were juniors and seniors in fall 2019 and 2020 didn’t get any more chances to perform, aside from a curtailed virtual musical revue in spring 2021.

But the committed performers in “Clue” behaved as if there had never been a hiatus.

“They were very engaged, very plugged in, very professional, an amazing group of young actors,” said Ciorciari, who has costumed productions all over Long Island for two decades. “When I first met with them, I asked each of them what they saw their character wearing. … Each of these kids had really thought about it.”

Ciorciari was also impressed with the actors’ friendliness and respectfulness.

“They made me feel part of their team,” said Ciorciari. “It was a cool experience. And Mr. Dolan is amazing.”

The word “amazing” cropped up more than once.

“It was definitely pretty stressful,” said Jackie Umana, who played Ms. White, “but I’m so glad that we have good chemistry between the cast. It was amazing. I loved it.”

Audience member Brian Fernandez graduated from Hempstead High in 2019, having performed in “Twelve Angry Men” and “The Addams Family” during his years with the theater department.

“It felt like home,” he said after seeing “Clue,” adding that, “It made me really happy to see everyone just enjoying themselves onstage, and that enjoyment was brought into the crowd.”

“I thoroughly enjoyed the show,” said an audience member who identified herself as the aunt of production participant Monae Mobley. “I like the board game a lot and I like mysteries, so it was very entertaining to see it come full circle with a live cast. The costumes were great as well.”

Cast, crew, and audience mingled happily in the orchestra area in front of the stage after the performance, still energized and full of laughter, and reluctant to leave.