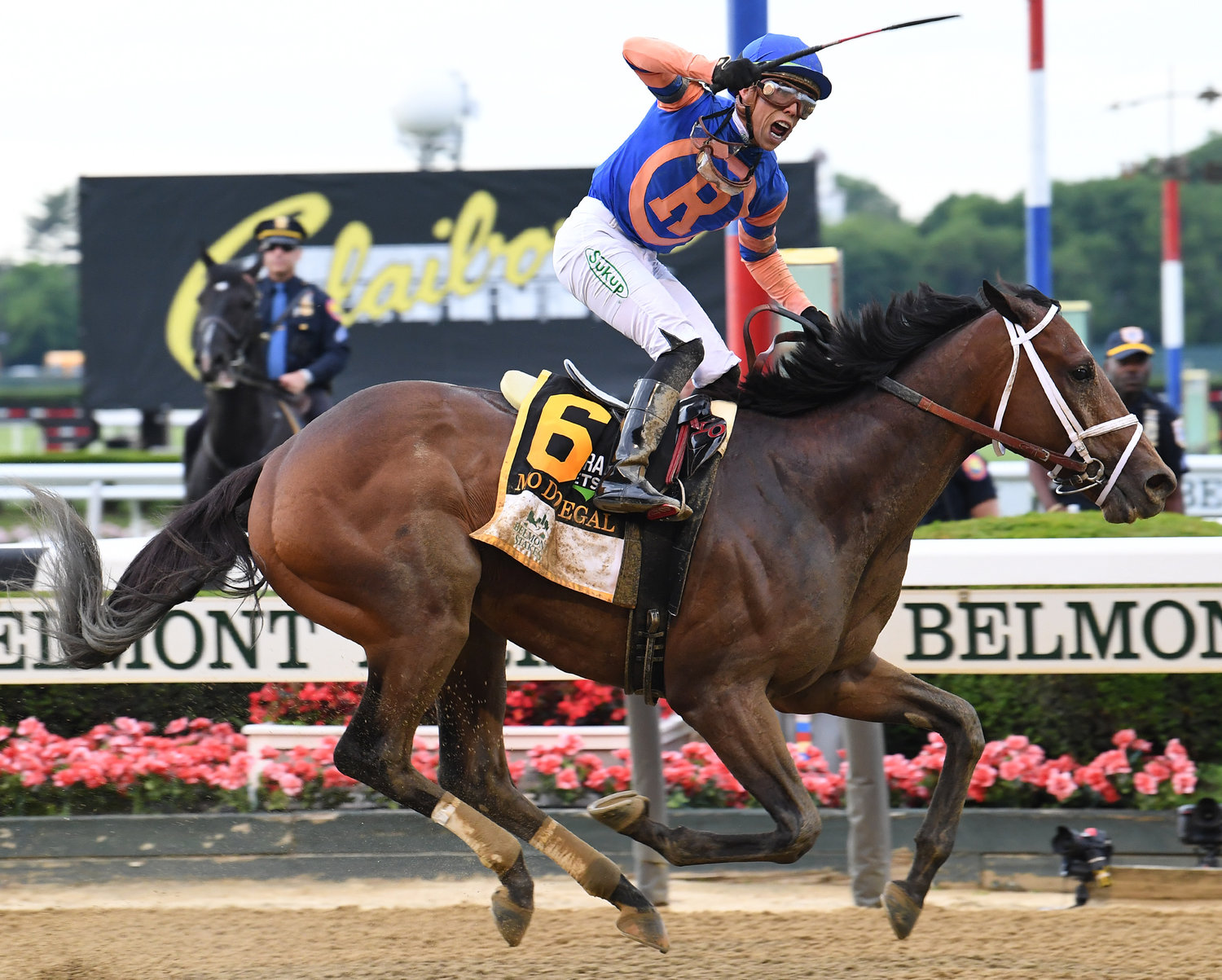 Favorite Mo Donegal, with jockey Irad Ortiz Jr. aboard, won the 154th running of the Belmont Stakes before a crowd of 46,301.
Courtesy NYRA/Viola Jasko
By Tony Bellissimo

A couple of hometown heroes in the thoroughbred horseracing industry celebrated a memorable victory Saturday after favored Mo Donegal, with jockey Irad Ortiz Jr. aboard, drew away down the stretch to capture the 154th running of the Belmont Stakes before a crowd of 46,301.
The three-length triumph marked the fourth Belmont Stakes win for Hall of Fame trainer Todd Pletcher and first Triple Crown victory for Mike Repole, who co-owns Mo Donegal with Donegal Racing and also co-owns runner-up filly Nest with Eclipse Thoroughbred.
Nest, also trained by Pletcher and ridden by Jose Ortiz, overcame a stumble out of the gate to finish a clear second outkicking pacesetters We the People (fourth) and Skippylongstocking (third.) Kentucky Derby winner Rich Strike was never involved and finished sixth in the eight-horse field.
“First of all, it’s our family’s favorite race,” said Pletcher, who trained filly Rags to Riches [2007], Palace Malice [2013], and Tapwrit [2017] to Belmont victories. “Our kids grew up here and went to school here and we’ve always felt like it’s our hometown race. When we’re fortunate enough to win it, it adds some specialness to it. That hometown feel. That part of it is really cool.”
Repole is a Queens native and a lifelong racing fan who in 2007 started his own thoroughbred ownership business, Repole Stable. His most accomplished horse to date, Uncle Mo, is Mo Donegal’s sire.


“It’s a 40-year dream,” Repole said. “Coming to this track [Belmont] and Aqueduct, being a kid from New York, this is New York’s race. In 2011, I came in second with Stay Thirsty and I watched the replay 150 times. I will no longer watch that replay.”
Mo Donegal was purchased in 2020 by Donegal Racing for $250,000 at the Keeneland September Yearling Sale. Fifth in the Kentucky Derby in his previous start, he more than doubled his career earnings with Saturday’s victory to $1,511,800.
“I want to thank all the partners of Donegal Racing. They’ve believed and today they’ve been rewarded,” said Jerry Crawford, owner of Donegal Racing. “I think this victory today shows that the sport is more accessible than they may realize. I can’t say enough for Todd Pletcher and Irad Ortiz, Jr. for the great job they’ve done with this horse.”
We the People took command under Flavien Prat and led the field through splits of 23.99 seconds for the opening quarter-mile, 48.49 for the half, and 1:13.23 for six furlongs on the fast main track, with the Manny Franco-piloted longshot Skippylongstocking pressing from second position.
Nest, who stumbled at the start, advanced up the rail down the backstretch to stalk from third position to the inside of Mo Donegal as Skippylongstocking continued to pressure the pacesetter. Ortiz, Jr. gave Mo Donegal his cue approaching the quarter-pole and he advanced with a powerful move, surging outside rivals at the top of the lane and got the jump on Nest, who then angled outside and followed her stablemate’s path to complete the exacta.
The winning time of the 1 ½ miles “Test of the Champion” was 2:28.28.
“Last time in the Derby, he didn’t have the best trip and he still got beat by [only] three lengths,” Ortiz, Jr. said. “I knew if I got a better trip, he could get there. When I asked him in the clear, he took off. He’s a nice horse.”
Much of the hype leading up to the race was about Rich Strike, the 80-1 historic upset winner of the Kentucky Derby who skipped the Preakness. Jockey Sonny Leon said Rich Strike didn’t seem comfortable on the Belmont surface and never found another gear.
Said Rich Strike trainer Ed Reed: “We were hoping we could have been a little closer and our pace was slow. Our biggest change was deciding to stay a little off the rail and try to give him a good, open run where he could take off. The whole way, his head turned and he was trying to get to the inside. I guess we made a mistake not putting him on the fence.”