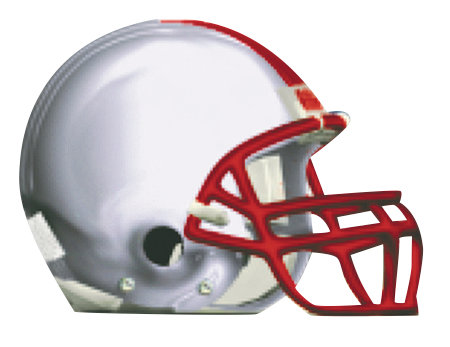 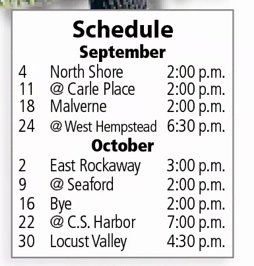 Kevin O’Hagan has assumed the role as Clarke’s new head coach after serving as an offensive coordinator the past three seasons. He previously was the Rams’ junior varsity head coach for 10 years following and has also led the Clarke Middle School football program early in his coaching career.

“It’s very special to be taking over after having gone through every level along the way,” said O’Hagan, who replaced Tim O’Malley after he opted to join the coaching staff at West Hempstead. “It’s nice to make it to the top of the program after climbing all those ladders all those years.”

O’Hagan has hit the ground running in his first year as head coach with offseason training four days a week during the summer. He said a big message during those preseason workouts was a readiness for taking on a number of positions.

“If you are in great shape and you are strong and fast you can play multiple positions in the high school level,” O’Hagan said. “In a small school with Conference IV versatility is gold because you don’t have a roster of 50 kids and injuries can sometimes become a problem.”

Clarke finished 4-2 in the spring and just missed out on qualifying for the four-team playoff field. The Rams enter the new campaign seeded third in Conference IV and in strong position to make a championship push as the postseason reverts back to an eight-team field. The Rams will get tested immediately out of the gate by top-seeded North Shore, which lost in last season’s title game to Wantagh.

Senior quarterback Nick Giardino returns to lead Clarke’s spread Wing T offense after a stellar junior season in which he finished as runner-up for Conference IV Player of the Year honors. He serves as a dual threat with his running and passing abilities.

Possible targets for Giardino out of the backfield or receiver include running back Jack Forte and wide receiver Sean Welsh. The versatile Anthony Sforza and Justin Rindner will be slotted either in the backfield or split out at receiver. O’Hagan said the tight end position is up for grabs entering the season.

A major key, according to O’Hagan, will be the success of his offensive line anchored by Liam Farrell, who earned All-Conference accolades last season. Senior center Mike Delaney also returns as does Tyler Benowitz, who is expected to switch from tight end to guard or tackle this fall. Sophomore Anthony Velez also earned some varsity experience at times as a freshman and senior Will Fulay, who missed last season, are also poised to make strides this season as starters.

Clarke, which opened the new season earlier than normal on Labor Day weekend against top-seeded North Shore after press time, will travel to second-seeded Seaford on Oct. 9. The Rams close the regular season versus Cold Spring Harbor and Locust Valley following a late-season bye week on Oct. 16 that O’Hagan hopes proves positive in gearing his team up for a possible deep playoff run that could culminate in the school's first county title since 1997.

“Assuming we can stay healthy I think we have a lot of really good pieces to compete for the title,” O’Hagan said.