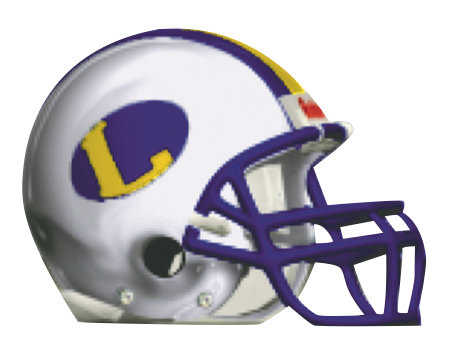 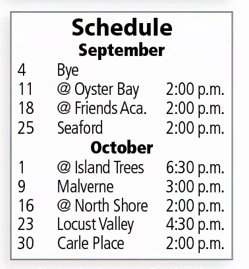 Replenishing the entire offensive line is the biggest challenge facing head coach Jason Supple as ninth-seeded Lawrence will attempt to inch up the standings and get into the Nassau Conference IV playoffs after a rough 1-5 finish last spring.

“We didn’t graduate a large senior group, but five of the guys made up our starting offensive line,” Supple said. “We’re going to have to piece things together pretty quickly. We have a bunch of skill players back, but what happens up front is a total question mark.”

The Golden Tornadoes do have stability and a bright future at quarterback, receiver and in the backfield. Pressed into action last season despite no experience under center, Kody Kirschner developed each week as the starting signal-caller and led the team in rushing by a wide margin. Now a junior, he’s improved his arm strength to go with his ground skills. “Kody is one of the most athletic, smartest and reliable kids we’ve got,” Supple said. “He’s no longer brand new to the position and getting better every day.”

Junior wideout Jared Alexander is a dynamic playmaker who’ll be utilized again in the passing game and jet sweeps. His combination of size and speed allow for plenty of yards after a touch, Supple said. He’ll also play defense for the first time and contribute as a linebacker or strong safety. “He made a lot of big plays as a sophomore and we’re excited about what he can do,” Supple said. Another junior receiver, Jahking King, made tremendous strides last season and is another yards-after-the-catch component. King will see action as a defensive end or linebacker on the other side of scrimmage. Senior Dennis Cabrera is a possession-type who can make grabs in traffic, while senior Kanye Robinson (6-foot-3) is a strong route-runner who’ll bolster the group after not playing last spring.

In the backfield, Supple is high on the potential of junior Jackson Mondesir, who was the Golden Tornadoes’ top performer on the defensive side of the ball last season. Mondesir had a rushing touchdown in their lone win, 19-14 over Malverne in Week 3. “He’s a big kid (6-2, 220 pounds) who can do some real damage running the ball with some coaching,” Supple said. “We’ll get him more than five carries a game. It’ll be his third year on defense.”

Sophomore Zaire Garraway has the ability to develop into the lightning to go with Mondesir’s thunder. “The quickness and talent are there, and he’s working on strength,” Supple said of Garraway, who’ll play somewhere in the back seven on defense as well.

Senior Leon Canales is the only lineman who played a varsity snap in the offensive trenches last season. “He saw limited time on offense but he’s a grinder who relies on good technique and footwork,” Supple said of Canales, a returning starting linebacker. Senior Andres Valle, who scored a defensive touchdown against Malverne on a fumble recovery, is likely to become a two-way starter and move into a guard spot. The same goes for Kevin Martinez, who’ll work on the D-line with Mondesir and Valle, and is a candidate to take over at center.

Supple believes the first two games, on the road against No. 12 Oyster Bay and No. 13 Friends Academy, are crucial to its playoff hopes with matchups against each of the top two seeds (North Shore and Seaford) down the road. “The first two couldn’t be more important,” he said. “We’re ranked above both of those teams and if we want to finish eighth or higher, those are must-win games.”