A dental miracle in North Bellmore 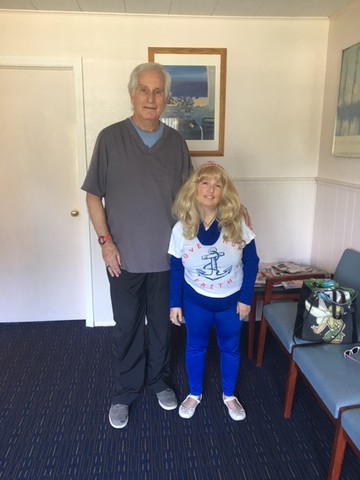 The bond between Marsha Lampert, 53, of Wantagh, and her dentist is as strong as the teeth in her mouth. When Lampert was 5, she said, she experienced anesthetic awareness, which occurs when a patient can see and feel what is happening around them despite being anesthetized.

Traumatized by the incident, Lampert was reluctant to seek help when she was diagnosed, roughly 30 years ago, with a multitude of related complications including dwarfism and dental ravage disease.

Dr. Michael Schamis, who has been operating in North Bellmore for 42 years, was able to help Lampert conquer her PTSD in 1983 when she first visited him, she said. Schamis uses hypnosis and therapy as a means of alleviating patients’ medical fears.

On Lampert’s first visit, Schamis performed no dental work on her, instead asking about her past, and introducing her to the basics of hypnosis. Schamis “treated me like a human being and not just a patient,” said Lampert.

At Ohio State University in the mid 1960s, Schamis had a friend who was earning his PhD in psychology. The dentist was fascinated after picking up one of his friend’s textbooks on hypnosis. He soon learned that the method began with Viennese physician Franz Mesmer, who used it as an alternative to purging, bleeding and opiate use — all medical practices that were common in 18th Century Europe.

“It’s your mind relaxing you,” Schamis told the Herald, while Lampert sat in his office and waited for her next appointment. “The hypnotist or therapist is guiding you into it. That’s all it is,” he continued, but his patient interjected and said, “For me, it’s a miracle.”

After moving to Florida in 2004, Lampert continued to see Schamis on a tri-monthly basis. However, almost a year ago, her disease accelerated to a point in which she couldn’t brush her teeth without filling her sink with blood, she said. When Lampert sought help from a dentist in Florida, she said that she was told to remove all of her teeth and get dentures. Lampert recalled feeling “dentally hopeless and dentally homeless.” She was able to take a flight back to Long Island with Mercy Medical Angels, a nonprofit transportation company, and reunite with her dentist.

Lampert said that, while her situation was challenging, Schamis fixed her loose teeth, created dental prosthetics for her missing teeth, performed cosmetic work and did all of the above to fit her adult-dwarf mouth.

Schamis said that it is easy for individuals to become the victim of doctors who care less about their patients and more about their profits. He cited a specific situation in which Lampert was attacked by a parrot in 2008 and experienced severe damage to her face and mouth. She was still living in Florida and saw a doctor who left her face “looking like a monster out of a horror movie,” she said. After an emergency flight back to Long Island, she added, Schamis “put me under and did his magic tricks.”

Lampert has become a role model for individuals with similar medical conditions. She recently shared her story on the online forum “Today I’m Brave,” and has been contacted by individuals looking for dental advice, all of whom she has referred to Schamis. “He showed me that whatever happens, he’s there for me and he will calm me down,” she said.