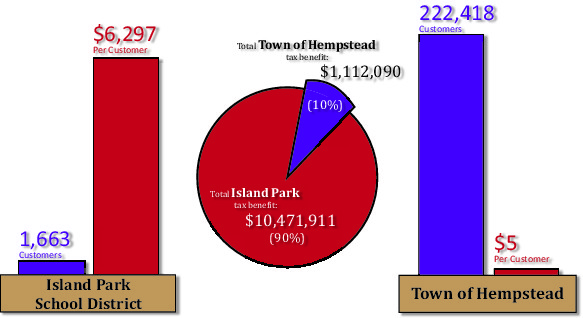 LIPA’s case: Unfair distribution. These charts compare the tax benefit of the E.F. Barrett Power Station between Island Park and Town of Hempstead residents. The pie chart shows the total amount of tax dollars that LIPA pays to each jurisdiction relative to each other. Island Park receives almost 9.5 times more in taxes from the Barrett plant than the town. The bar graphs show the average benefit of those taxes to LIPA customers within and outside Island Park.
Data Courtesy LIPA 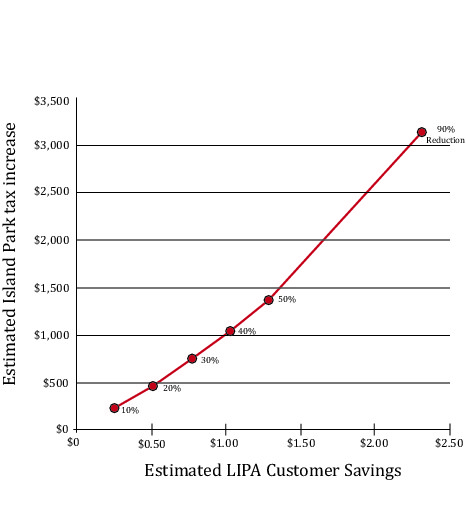 The District’s case: Undue burden. This chart shows the financial impact that the case could have on taxpayers in Island Park compared to LIPA customers on the whole. The vertical axis shows how much more the average Island Park taxpayer will pay, depending on the property tax reduction that the Barrett plant will receive. The horizontal axis shows LIPA’s savings under each outcome, distributed equally among their 1.1 million customers.
Data from 2014/2015 courtesy Island Park Union Free School District
Previous Next

Dec. 15 – Pretrial Conference, where settlement proceedings are expected to begin.

Dec. 19 – LIPA’s board of trustees will hold a finance and audit committee meeting open to the public. School board officials suggested that residents attend the meeting to voice concerns.

Jan. 25 – LIPA will hold another finance and audit committee meeting.

Feb. 27 – Deadline to file “Summary Judgment Motions,” which ask the judge to rule that, based on the evidence submitted, the opposite party cannot win. Both sides are expected to file summary judgment motions.

April 23 – Date for trial, which will take place in the event that no summary judgment is granted, and no settlement reached. If commenced, the trial is expected to last a week.

The judge presiding over the ongoing legal battle between the Island Park Union Free School District and the Long Island Power Authority has set a time line for the case’s conclusion. An April trial date has been scheduled to consider the question of whether LIPA has a right to reassess property taxes on its E.F. Barrett Power Station in Island Park, which account for about 46 percent of the local school district’s budget.

The case could end before the trial date, according to the district’s attorney, Bob Cohen, if the parties were to agree to a settlement, or if Judge Timothy Driscoll were to grant either party a summary judgment.

Cohen contends that provisions of a 1997 LIPA power supply agreement prevent the power authority from challenging its assessed valuation on the plant unless LIPA officials believe the utility has been unfairly singled out for taxation. The language of that provision is not present in an amended agreement from 2012.

Further, Cohen said the utility was never “targeted” for taxation. “They’ve never made that allegation,” he said.

According to a 2017 LIPA report, the utility argues that the “tax burden that is currently hidden within [LIPA customers’] electric charges” is a “hidden tax burden,” and comprises 15 percent of its charges overall. The report also decries “the uneven manner in which those hidden taxes are distributed through the tax system.”

At a Nov. 27 Island Park Board of Education meeting, Cohen updated the community on the legal proceedings under way since August. Thirteen witnesses were deposed, including Marie Donnelly, the district’s business official; Dr. Rosmarie Bovino, the superintendent; and six LIPA officials.

Included in Bovino’s deposition was a breakdown of how different outcomes of the case would impact Island Park taxpayers. If LIPA received the 90 percent reduction it is requesting, the average district homeowner would see property taxes rise by more than $3,000, or roughly 72 percent, annually.

In addition to the legal proceedings, the district has retained Jeffery Weiss, a political consultant from the government relations firm LJM RAD. He has been working with other districts facing similar feuds with LIPA over what could amount to large reductions in their tax bases. The school districts involved have agreed to share the cost of retaining the firm.

“We felt that LIPA and National Grid certainly have their government relations folks up there [in Albany], so we wanted to have ours up there too,” Cohen said. “We want to approach this from every angle that we can. [Jeffrey Weiss] received a good recommendation from Northport,” whose school district retained the firm in October.

Cohen said that the support in Albany could assist the district in securing a more favorable settlement, and in obtaining state relief.

Residents voiced their concerns at the meeting, at times calling on the school board to “do more” to keep residents informed. Bovino directed residents to the district’s website where information, including updates, news articles, letters to local officials and legal memos from Cohen’s firm, can be found.

Other residents at the meeting expressed a sense that the community should take a more active role in the case, a sentiment that Bovino, Cohen and school board President Jack Vobis support.

One resident, who did not give her name, suggested that local taxpayers start a campaign to send letters of concern to local elected officials, and asked the board to draft a sample letter, and to provide a list of officials.

Bovino countered that a sample letter had been posted on the website for some time.

Debbie Rothman, of the Island Park Civic Association, said that her organization would organize letter-writing campaigns to help push the effort along. “The school district can only do so much,” Donnelly said, “but when residents go after local legislators asking ‘Hey, how are you going to help us with this?’ I think that can really make a difference.”

Cohen suggested that Island park residents tell their concerns to LIPA’s board of trustees, which holds public meetings. He later told the Herald that “[LIPA officials] seem skeptical that [Island Park residents] are really that concerned about what’s happening. If people actually come to their meetings, they might realize that that’s not the case,” adding, “Let them experience democracy firsthand.”

Mike Scully, president of the Island Park Chamber of Commerce, told the Herald, “From a business standpoint, those [tax] increases would run the risk of trickling down to business owners, whether they be owners or tenants.” He added, “One of the many things that attracts people purchasing in Island Park is our lower tax rate.

“We’ll try to get the community organized in the coming weeks,” Scully said. “Getting the community involved during this process is much more critical than people getting involved after it’s over.”