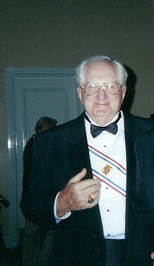 James G. Brady, Island Park firefighter, trustee and Santa Claus to the community during Christmas season, died at his home in Brandon, Fla. on Aug. 3. He was 85.

Brady, the son of one of Island Park’s original residents, was among the first students in Island Park’s public school system. Since poor eyesight prevented him from serving in the Navy during World War II, he turned to a career as firefighter at a young age. Brady first served as a Jersey City firefighter before joining his mother-in-law to work for 30 years as a watch foreman at Consolidated Edison.

For 24 years, Brady also served on the Island Park Village Board of Trustees, working as a legislator in the village. “It was a thrill for him to help the community,” said son Michael Brady. “He did a great service to the people during his time as legislator. I will always remember him as the trustee with a big smile.”

Brady’s legacy also includes his dedicated involvement as member of the Island Park Fire Department, a job that Michael insisted his father loved. He also loved to dress up as Santa Claus during Christmas time during the 1970s and 80s, when each year he would arrive at the Island Park train station in a helicopter to deliver presents for the children

“It provided a lot of excitement and a lot of laughs,” said Michael.

During his time off, Brady enjoyed boating as his one of his most favorite hobbies. He piloted a wooden Criss-Craft vessel, which consumed much of his leisure time.