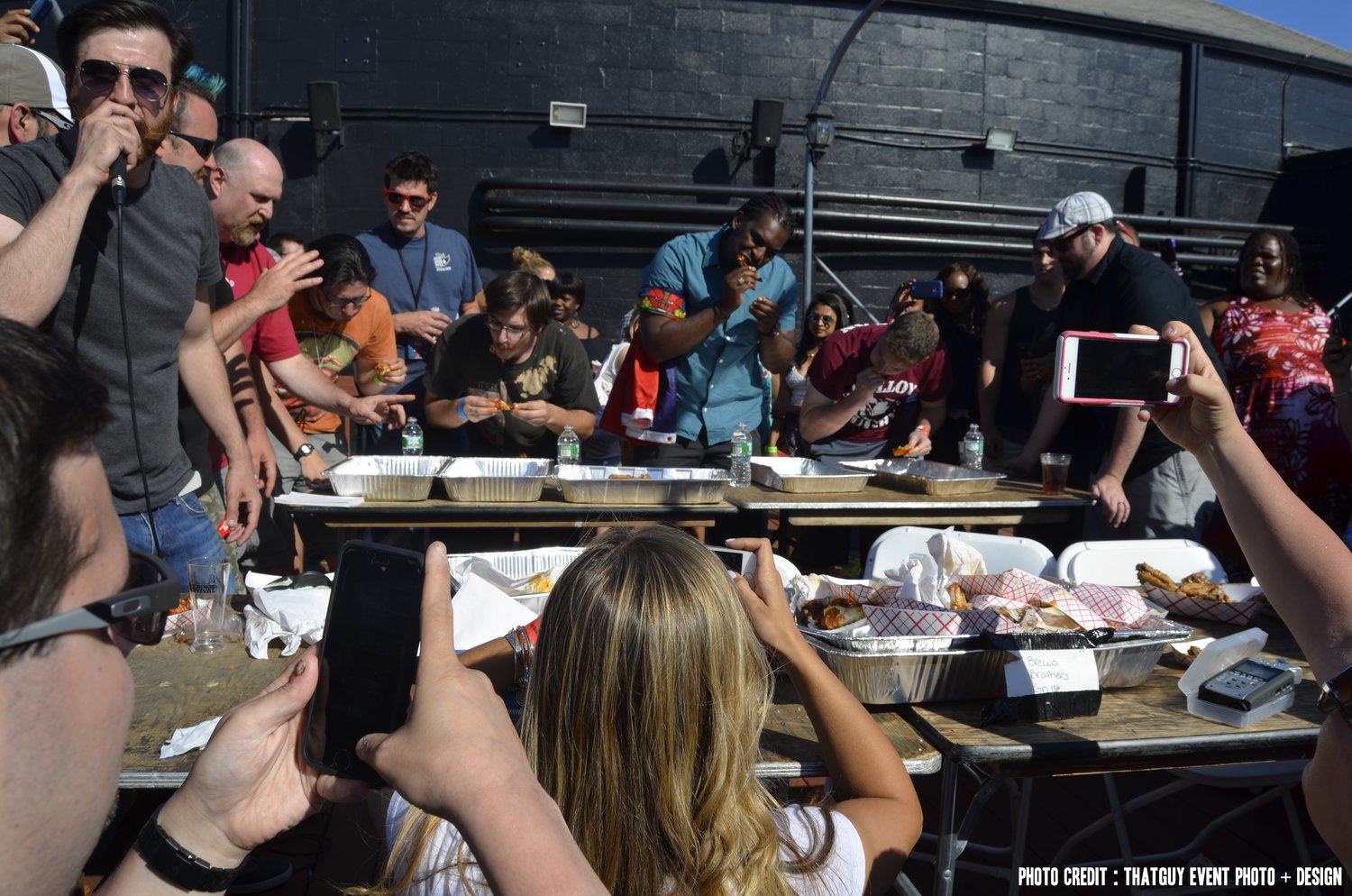 Wing fans have been coming out to the Island wing fest since 2014.
Courtesy Matthew Kourie
By Kepherd Daniel

Chicken wing fans on Long Island are gearing up for an exciting food competition that is headed for Oceanside on May 21. The Official Best Wings Championships is coming to the South Shore Craft Brewery, 3505 Hampton Rd. The event, which is hosted by BestWingsLI, is a chicken wing tour of the best wings and beer spots, and restaurants will arrive from across the Island, and even out of state, to face a judging panel determining which restaurants serve the best wings. Tickets for the event are available to adults 21 and older online at NYbestwingsfestival.com.

Those in attendance will be in on the wing-judging fun, bestowing a People’s Choice award on the restaurant voted to have the best wings. They will each be served two wings from each of the restaurants to decide which one is best.

During the event, a variety of beverages will be provided by head brewmaster and Oceanside resident Pete Tripp. This is the first NY Best Wings Fest in two years as a result of the pandemic. Traditionally, the Wing Fest, which has been going on since 2014, has taken place in several locations. This year, Oceanside will host the contest for the first time ever, which is important for 42-year-old festival founder and organizer, Mattew Kourie, who was born and raised in Oceanside and is excited to bring the wing festivities to his hometown.

So far, signing up for the event are Brews Brothers Grille in Franklin Square (US Wing Champions), Elsie Lane Wing House in Bellmore and New Hyde Park, Tap Room in Rockville Centre, Churchills in Rockville Centre, The Blind Rhino, an award-winning restaurant in Connecticut, Swingbellys BBQ in Long Beach, and Smoke-Haus in Garden City. Other restaurants are expected to sign up.

Swingbellys BBQ won best barbecue wings for NY best wings festivals and will be defending its title. “This is a serious competition,” said Kourie. “This is not just like random wing places. It’s a very exclusive event where restaurants have been narrowed down and selected … to come and compete for best wings with the industry judges panel and for People’s Choice.”

While the restaurants will be in fierce competition to win the title of best chicken wings, plenty of other activities will be available for the crowd in attendance, with live music, a hot wing-eating contest, social media contests, prizes, t-shirts for sale, and a live music concert.

“It’s going to be an incredibly fun time and you’re supporting local and helping us rebuild our event company so we can get back to big events and that’s the focus of the support locally here, especially for Oceanside,” said Kourie. “We’re putting a big spotlight on Oceanside and bringing a lot of traffic here and people can check out the restaurants in Oceanside, the little shops, the Music & Arts business. We’ve got a lot of cool things here in Oceanside that people just don’t know about and I’m very glad I can bring this kind of love to Oceanside,” he added.

“I want Oceanside to get some love,” said Kourie. “Let’s put a spotlight on here. Have businesses come here to give them love. I’m going to be on the microphone promoting Oceanside. If people are in town, they can hang out in Oceanside after the session. After you’re done sampling the wings and voting, there’s a barbecue truck on-site, brisket, ribs, mac and cheese. This is the ultimate wing beer BBQ live festival; it’s going to be amazing.”