Chief lifeguard turns in his whistle after 53 years 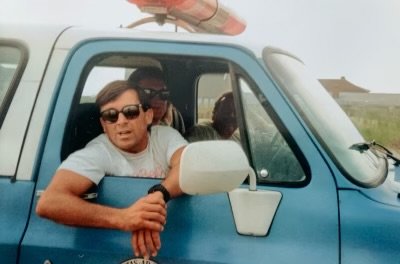 Paul Gillespie has been a familiar face on the beach as a lifeguard for the past 53 years, 15 of them as Long Beach’s chief.
Courtesy Paul Gillespie
By Brendan Carpenter

Paul Gillespie has been looking at the sea for 53 years, either from his perch on a lifeguard stand or while supervising others who save lives at the ocean.

He will continue gazing at the water in the future, no doubt, but not quite the same way. This summer has been his last as the city’s chief lifeguard.

Gillespie, 72, an Irish immigrant, grew up in Baldwin and moved to Long Beach 37 years ago. He has seen, and led the city lifeguards through, a lot over those years, the last 15 as  chief.

His son, Paul Jr., is a lifeguard lieutenant with the central crew, which patrols the city’s central beaches.

“Times have been very tough here,” Gillespie said. “(Hurricane) Sandy was difficult, because it left us without facilities to run the beach,” he said. The 2012 storm destroyed the boardwalk, and many homes in Long Beach. “We put up and tent, and had to use it as a lifeguard headquarters.”

In Gillespie’s 15 years as chief lifeguard, there were no drownings during beach season while lifeguards were on duty. His mantra, he said, is, “Everyone that comes to the beach goes home from the beach.”

He takes great pride in that, but his favorite part of the job is mentoring young kids and lifeguards who work alongside him. He has worked the beach with hundreds of young lifeguards, over 100 each year, many of whom return summer after summer. Many are Long Beach residents.

The training regime is rigorous. Lifeguard hopefuls, and returning guards, must swim 200 yards in the Recreation Center pool in a maximum time of 2 minutes, 45 seconds, and finish a one-mile run on the boardwalk in no more that nine minutes.

Candidates must be certified in CPR and first aid, and show that they know all the procedures and protocols of the beach as well.

Gillespie has mentored young people not only on the beach, but also in the classroom — and on the wrestling mat. He spent 30 years teaching phys. ed. at West Elementary School, the middle school and the high school. He has coached wrestling at Long Beach and Oceanside high schools, and currently coaches in Wantagh.

He plans to continue coaching the Wantagh High wrestling team, which won the Nassau County championship in 2021. He was inducted into the National Wrestling Hall of Fame in 2005.

Harvey Weisenberg, a Long Beach resident, a former state assemblyman and a longtime Atlantic Beach lifeguard, said that Gillespie is the “most dedicated coach I’ve ever met,” and that he has had a lasting influence on the children he has worked with.

“He developed every child as an athlete while showing them the right way to live life,” Weisenberg said. “He has taught sports and life values. He’s a blessed angel.”

Lifeguarding from Memorial Day to Labor Day every summer for 53 years can be taxing. At the end of last summer, Gillespie wasn’t sure if he wanted to continue. It was a difficult decision for him, but he “sucked it up,” as he put it, and helped protect beachgoers one final season.

“I had a hard time with it, because I just didn’t want to be there as much,” he acknowledged. “At the end of (this) year, I didn’t want the fanfare, so I just told the city manager I was done. I’ve had enough, but it was a great, great part of my life.”

“The Chief” won’t be steering clear of the beach entirely, as he plans to continue going there — now just to relax — with his wife, Jannine, which he hasn’t been able to do for a long time.