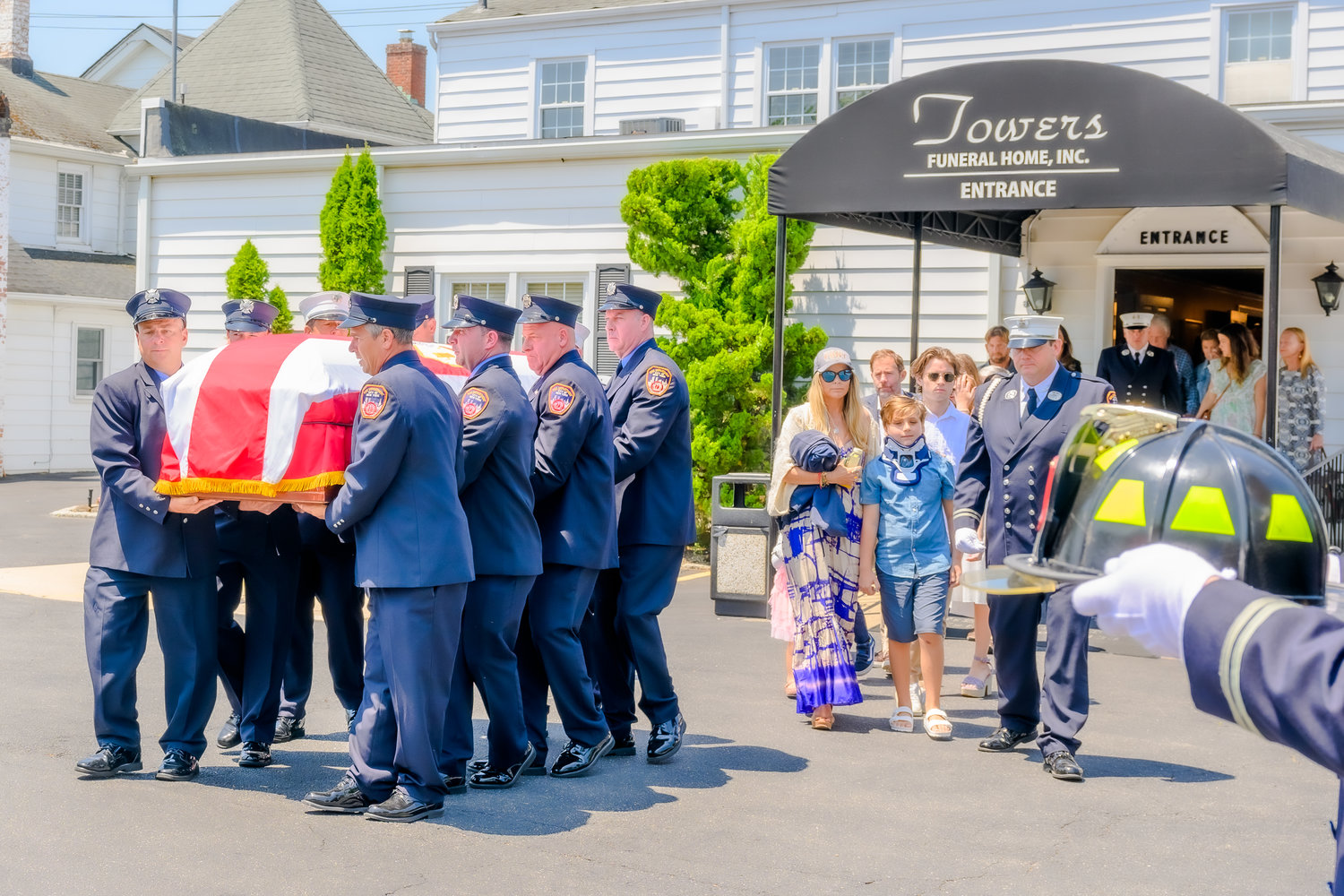 Firefighters of Ladder 137, in Rockaway Beach, carried the casket of Casey Skudin after an hour-long FDNY service at the Towers Funeral Home in Oceanside.
Bob Arkow/Herald
By James Bernstein

There were tears, hugs, speeches, music, and some laughs at an FDNY funeral service Friday for Casey Skudin, a member of a well-known Long Beach surfing family. Skudin was killed in a freak auto accident June 17 in North Carolina while on vacation with his wife and two sons.

Nearly 200 members of the New York City Fire Department, including those from his Ladder 137 firehouse in Rockaway Beach, lined up outside the Towers Funeral Home in Oceanside for an hour-long service that included remembrances of Skudin’s life growing up in Long Beach, his time as a firefighter, a Hempstead lifeguard, and his deep devotion to his wife, Angela, and their sons, Ben and C.J.

Skudin, who would have been 46 on Father’s Day, died when a 2,000-pound tree limb slammed into his car during an intense windstorm. He and his family were driving into the Biltmore Estate, a tourist resort, when the incident occurred, according to North Carolina police. Angela Skudin was uninjured, but C.J. suffered a neck injury and wore a neck brace to his father’s funeral. Ben was briefly knocked unconscious.

Skudin, a highly decorated firefighter who joined the department after the 2001 attacks on the World Trade Center, was described as a hero who had made numerous rescues in the waters off Rockaway Beach and also during Superstorm Sandy in Long Beach.

He was an athlete, a bartender and a husband and father who put his family above all else.

“If you were in trouble, Casey was the guy you wanted around,” said Brian Walsh, who grew up with Skudin and served with him at Ladder 137. Walsh and Skudin surfed together and remained close all of their lives, Walsh said.

“He was humble about everything,” Walsh said. “No one needed to know” what he did.

Evan Davis, also a firefighter stationed at Ladder 137,  said it was “almost impossible” to say “just a few words” about Casey Skudin. He said Skudin sometimes had the responsibility of deciding on the menu at the firehouse, a job that requires patience and tact.

“Every firefighter has an opinion, straight mustard, or yellow mustard?” Davis said. “After our firehouse (in Rockaway Beach) was destroyed in Sandy, it was all re-built but Casey had to decide where to put the new couches. It was a major decision.

“But what inspired me most about Casey was his devotion to his family.”

The media was not invited into the Towers Funeral Home, as the family sought privacy. But speeches were broadcast to the large parking lot outside. An FDNY fire truck was stationed outside the funeral home, with Skudin’s name inscribed on its side.

Davis noted that Skudin was highly-intelligent, earning a degree in marine biology from the University of North Carolina in Wilmington.

Fire Capt. Mike Romano met Skudin when both were 16 and working as lifeguards. Romano remembered a hectic teenage life, working, trying to meet girls, and pondering the future.

“Most of us gravitated to the fire department,” Romano said. “Most of us got married and had kids at about the same time. We were always all together. Ask Angela. She says Casey is still here.”

C.J. Skudin, 10, brought down the house with a few jokes about their family life and relationship.

He said, “He definitely spoiled me a lot.” He said his dad had a big appetite, but that he had an even bigger appetite. Finally, he said. “My father was a good guy. My first job is going to be a lifeguard and I will be a firefighter.”

When it came to Angela Skudin’s turn to speak, there were tears and smiles. Angela Skudin is well-known in Long Beach as the owner of Codfish Cowboy, a clothing and novelty shop on the West End.

She said her husband was “a life-saver. Casey was my everything. He was my lover, my husband, my bill-payer, my accountant, my chauffeur, my favorite person in life.

Skudin’s flag-draped casket was carried out of the funeral home and put aboard an FDNY truck for a private burial ceremony in Queens. A lone bagpiper played a dirge as muffled drums rumbled in the background and firefighters stood at attention.

The fire truck rolled out of the parking lot.

“Because Casey was here, I was loved fiercely,” Angela Skudin said. “No physical death can end that.”