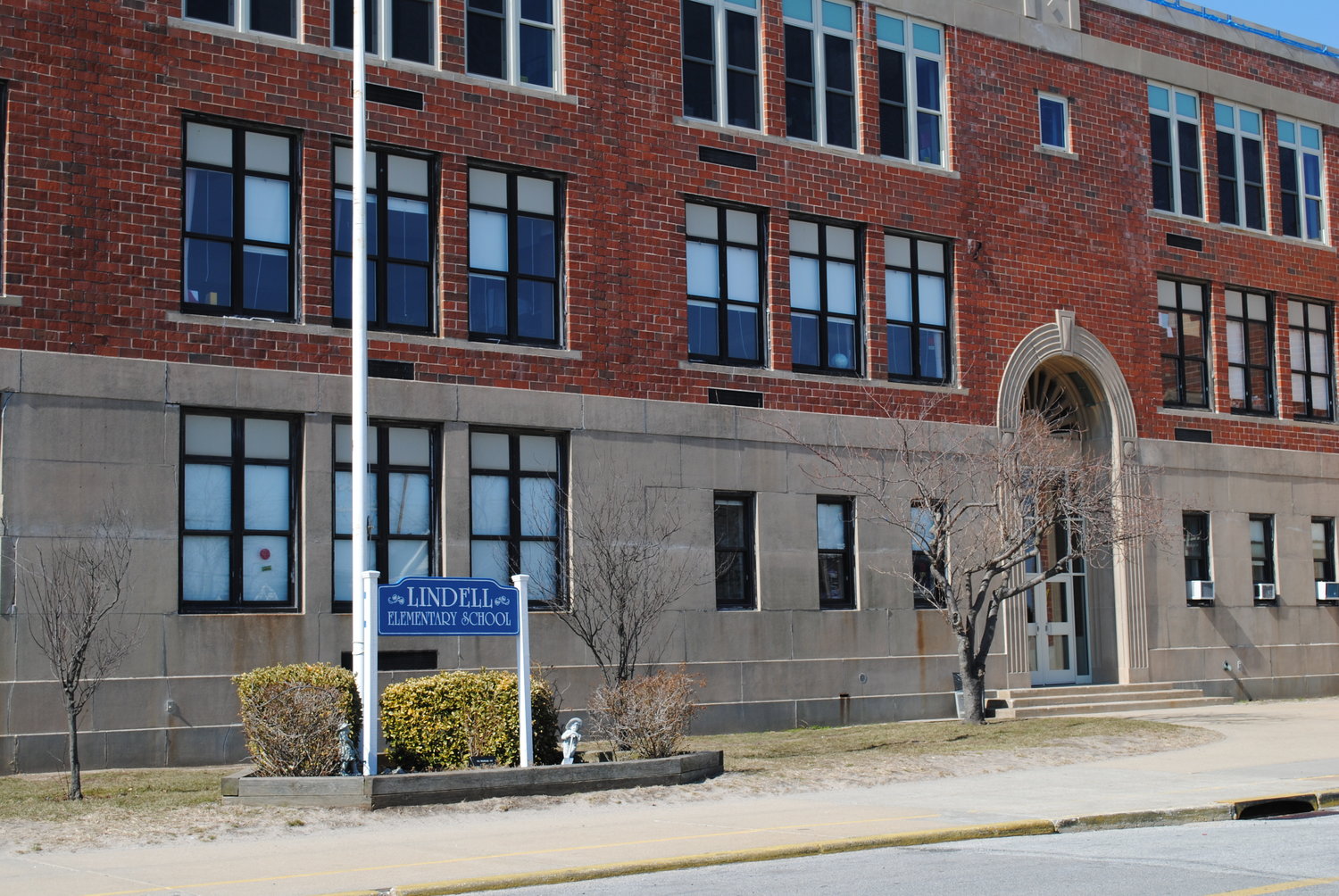 Lindell Elementary School was the scene of a tense Board of Education meeting on Tuesday.
Christina Daly/Herald 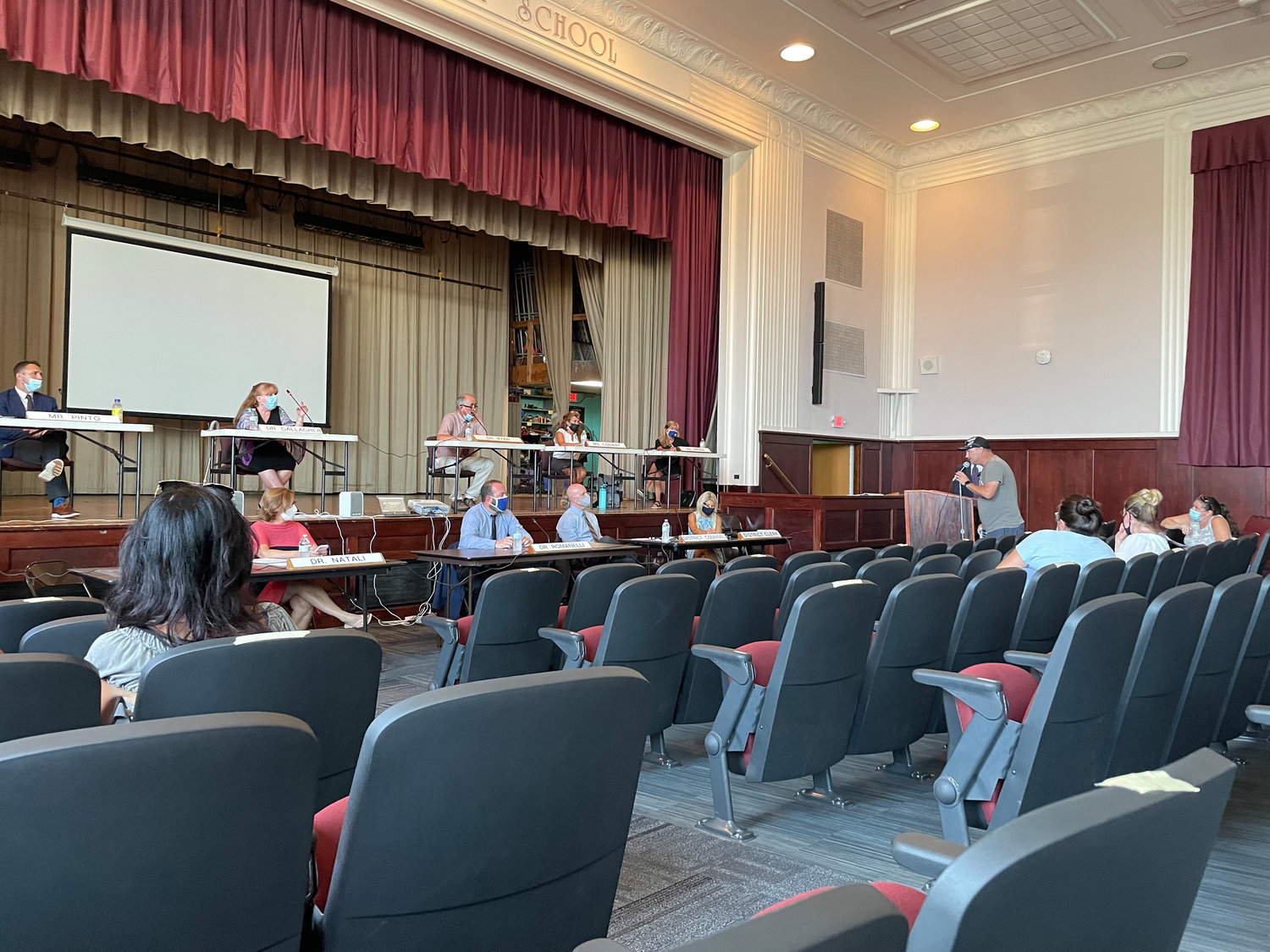 Sean Hayden, at lectern, and many other parents expressed their concerns about the mask mandate at Long Beach schools.
Darwin Yanes/Herald
Previous Next
By Darwin Yanes

By a vote of 4-1 on Tuesday night, the Long Beach Board of Education affirmed a statewide mandate issued by Gov. Kathy Hochul that all school students must wear masks to help prevent the spread of the coronavirus when classes start next month.

Many of the approximately 50 people in attendance at the Lindell school auditorium appeared to strongly disagree with the board’s action.

The board’s vote came only hours after Hochul was sworn in as governor, and announced the mandate.

Trustee Sam Pinto, who cast the lone dissenting vote, declined to explain his decision after the meeting. The vote came as the Covid-19 positivity rate in Nassau County has risen to 4 percent, and the positivity rate in Long Beach among children ages 5 to 17 has climbed to 9 percent.

Schools Superintendent Dr. Jennifer Gallagher presented the plan, and noted that community stakeholders and health experts had been consulted, and surveys and studies were taken into consideration. Parents also weighed in at a prior board meeting, and responded to a survey.

“Our goal is to provide a joyful, exciting, as normal of a year as possible, but also following the state guidelines,” Gallagher said. She added that the plan would be re-evaluated periodically as positivity rates change and vaccines become available for younger students.

Besides masks, the plan mandates three feet of space between desks in classrooms. The district will provide clear masks for speech and literacy classes, there will be frequent outdoor breaks, and field trips, PTA events and sports will return.

Sean Hayden was the first, and most vocal, parent to voice his disapproval of the proposed mandate before the board voted. “Our kids should not be wearing masks in schools,” Hayden said. “It’s our choice. Not yours or the CDC’s. It’s ridiculous.” His comments were followed by the first of many bursts of applause from some members of the audience, although board President Dr. Dennis Ryan tried to maintain order throughout the meeting.

Another parent asked the board what the metrics would be for the mask mandate to be removed. He said he thought the order would be a “slippery slope” and would likely lead to a vaccine mandate.

Other audience members expressed concerns about masking during concerts and theater shows. Gallagher acknowledged the district was working on a plan, and agreed that she would prefer that such shows be maskless.

Her presentation, which was printed out for attendees, had a section titled “What happens if I do not agree to let my child wear a mask in school?” Gallagher explained that two hours per day of alternate virtual instruction will be given to students whose parents choose to keep them at home.

After more than an hour of comments from parents, the board voted to pass the measure. Most of the crowd walked out.

She also stressed that regardless of the school board’s decision, the governor’s mandate must be followed.

School is scheduled to start on Sept. 9.