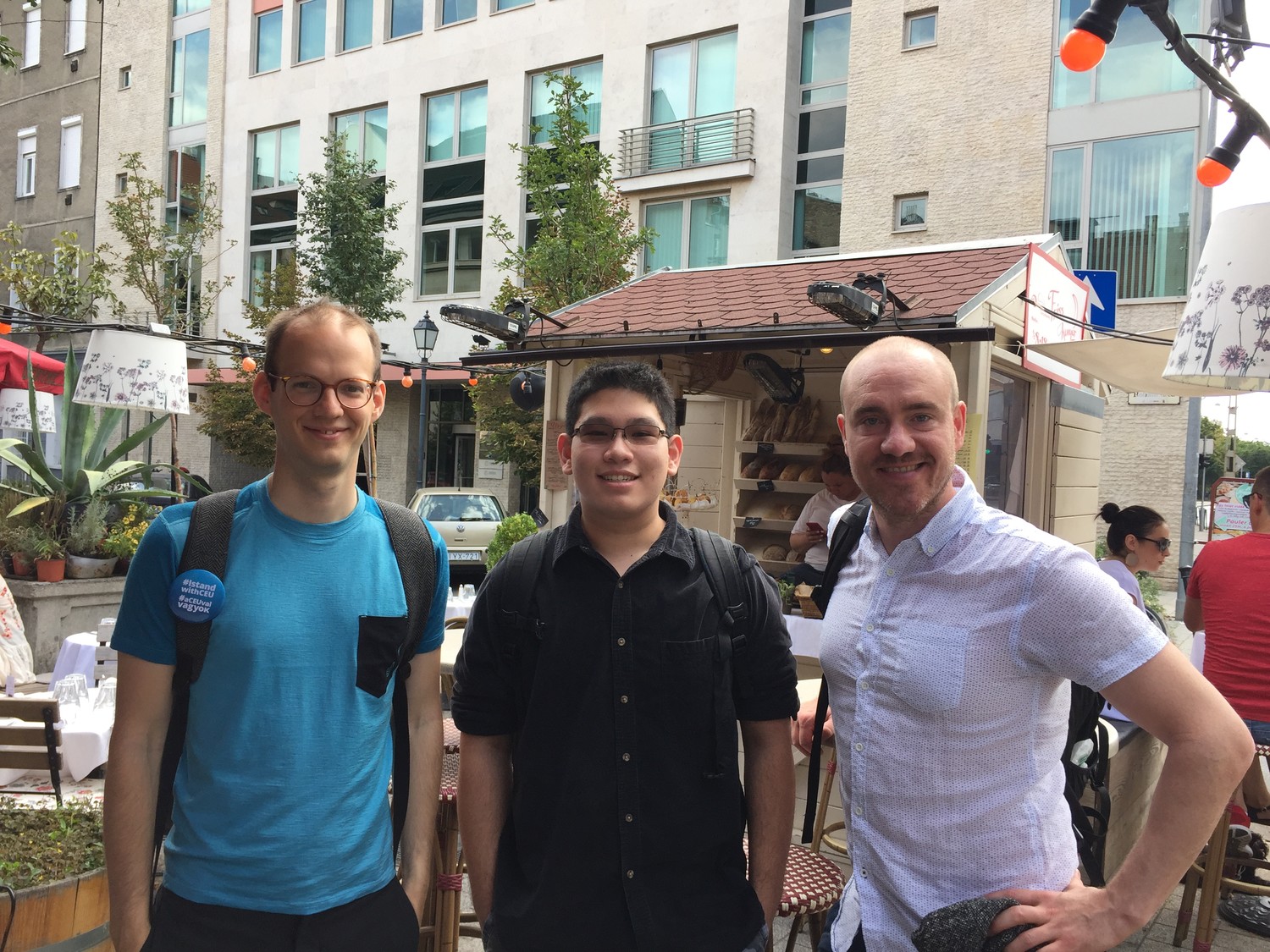 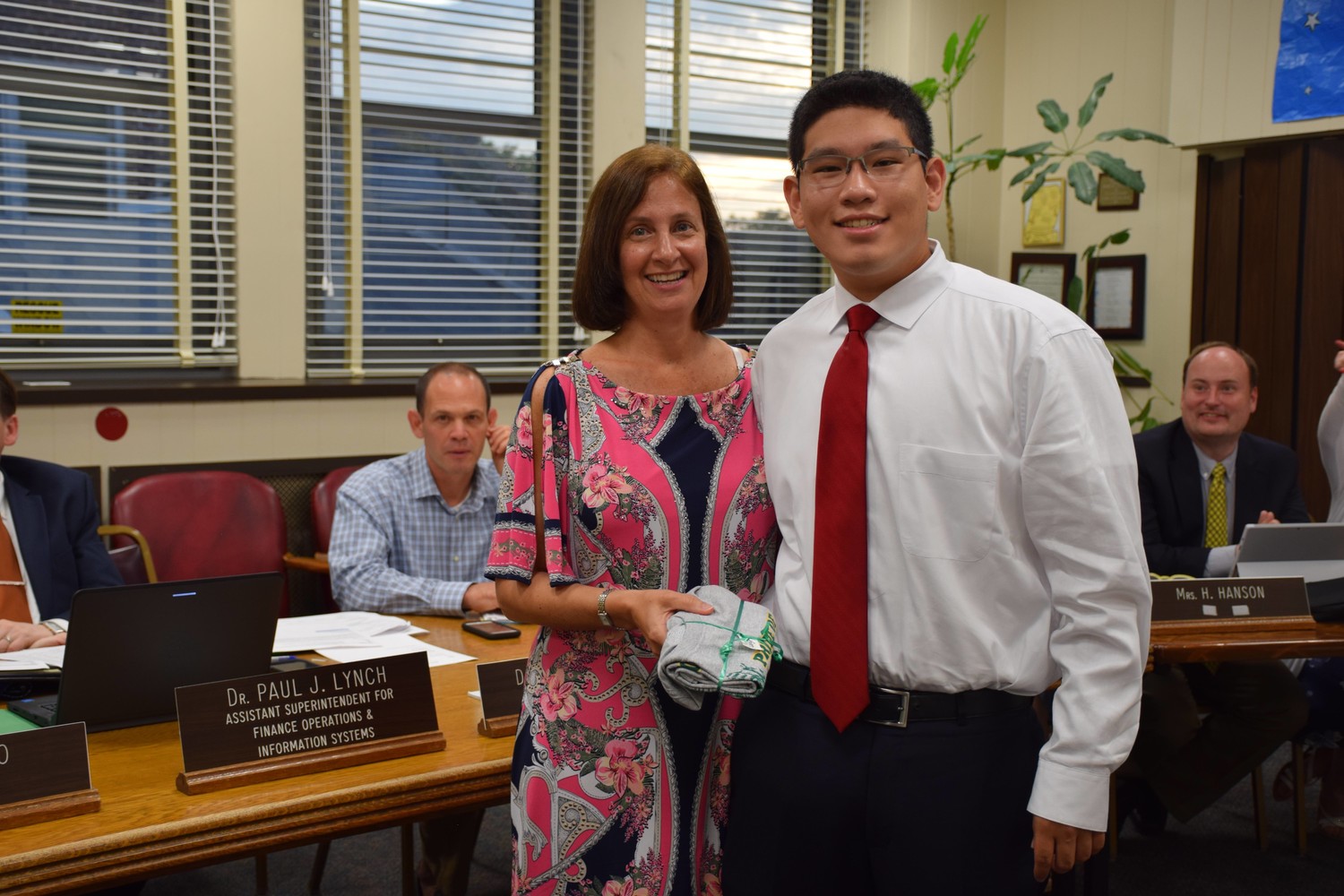 Bing was honored by the Lynbrook Board of Education after he had his theory published in the Journal of Emerging Investigators.
Courtesy Robbie Bing
Previous Next

I learned there isn’t a certain age you have to be to get a paper published. You just have to put in the work.”
Robbie Bing, Lynbrook class of 2018 graduate
By Mike Smollins

In search of scientific inspiration, Robbie Bing traveled farther from home than he had ever been last August, flying 4,350 miles to Budapest, Hungary. There he spent a month testing a theory, the results of which were published in a peer-reviewed journal last month.

Bing graduated from Lynbrook High School in June, and will attend Boston University, to study medical engineering, this fall.

It was a long road to publishing his journal paper, however. While seeking a mentor to set up an experiment for Lynbrook High’s Scientific Research Program during the 2016-17 school year, Bing, at the time a 17-year-old junior, was getting nowhere. Then, after emailing 20 other professors who declined or ignored his requests, he found Dr. John Michael, a professor who was willing to help him. There was only one complication: Michael was teaching at Central European University in Budapest, making it hard to get to him.

“I told my dad I wanted to go to Budapest, and he started laughing,” Bing recalled. “Then we started looking into it, and I received a deal to stay at a hostel for $700 per month last summer.”

Bing spent last July working at Cold Stone Creamery, on Broadway in Lynbrook, to save for the trip. His parents paid for his flight to Budapest, where Michael mentored him and gave him access to the school’s lab for the month. Bing created an experiment based on the “Uncanny Valley effect,” which is the human tendency to feel uncomfortable around nonliving, humanoid objects. He believes, he said, that many people find human-like robots “creepy” compared with those that do not resemble humans.

He began the experiment believing humans can overcome the Uncanny Valley effect by sharing a stressful experience with a humanoid robot, and forming a bond with it. Robots, he said he believes, will increasingly become schoolteachers, nurses, nannies and clerks as technology improves, and people will have to overcome their fears.“Robot integration is an emerging necessity for a society that is going to have robots for generations and generations to come,” Bing said. “So it piqued my interest.”

The lab where he was working had a database of volunteers willing to take part in experiments in exchange for vouchers to buy food, clothing or supplies on campus. The anonymous subjects took part in a 40-minute experiment that was funded by a grant from the European Research Council. While still adapting to a foreign country, Bing worked with Michael to set up the experiment, changing its design several times.

“He was very impressive in his motivation and dedication,” Michael said. “Coming all the way to Budapest for a month or so was a very courageous and ambitious step. It was a pleasure to work with him, in part because of how seriously he took the research.”

With the help of Michael and others, Bing created a computer program to test his theory. In the experiment, volunteers underwent a pleasant experience with a human-like robot. Afterward, they were introduced to a second robot with human features, which endured a stressful experience with them. The subject then was told they had to sing Queen’s “We Will Rock You” with the robot in front of the lab’s staff, a situation the robot helped the person get through.

“This got them extremely stressed out,” Bing said of the subjects. “A bunch of people walked out.”

Those who stayed had their heart rates measured with an electrocardiogram. They were then asked to select a robot to help them with other tasks. They had to choose among the human-like robot that they had shared the pleasant experience with, the humanoid that they had endured the stressful situation with or two unfamiliar, nonhuman-like robots. Bing found that most chose the robot that had helped them prepare for the song. Bing concluded that having gone through the stressful experience with the humanoid helped to diminish or eliminate the Uncanny Valley effect. People chose to work with a human-like robot, he said, because of the rapport they had developed with it. “If I had to give my best reason why, it was because the robot had so many human-like characteristics that they were able to relate to it after enduring the stress,” he said.

Bing spent five months preparing a paper about what he had discovered, and sent excerpts from it to Michael weekly for feedback. In December, he submitted the paper, titled “Overcoming The Uncanny Valley Through Shared Stressful Experience with a Humanoid Robot,” to the Journal of Emerging Investigators, a nonprofit scientific journal run by Harvard University graduate students, which is dedicated to publishing the work of middle and high school students. His paper underwent a rigorous editorial and scientific review by several doctorate-level scientists before it was published on June 12.

David Shankar, the Lynbrook High School teacher who created the Scientific Research Program 20 years ago, said that Bing is one of only a dozen students from the school to have their research published over the last decade. Shankar, who mentors the science researchers with co-teacher Chuck Vessalico, said the program is intended to enrich students’ science studies and give them the chance to enter major science competitions. The program has helped many former students become professional researchers in labs across the country. Shankar was in frequent contact with Bing when he was in Budapest, he said, and helped guide him during his first trip outside the United States. “It was a growing experience for him,” Shankar said. “He didn’t speak the language, and he had to learn a lot. I think he really grew up last summer.”

The Lynbrook Board of Education honored Bing at its July 3 meeting. The researcher hopes to work one day as a neural engineer, creating brain implants, he said.

“I learned there isn’t a certain age you have to be to get a paper published,” he said. “You just have to put in the work.”