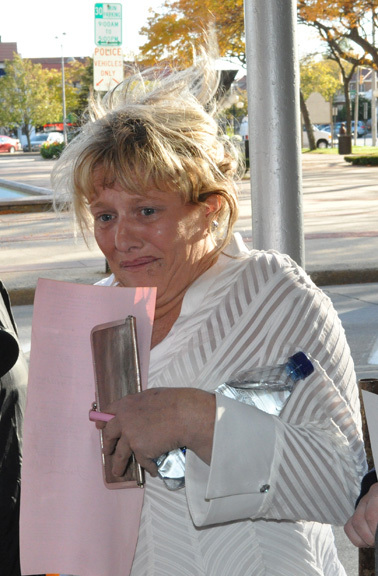 Mariah Mills, a tenant in Marsicano's home, was in tears as she spoke to reporters outside of City Hall. She and her roommate say they witnessed Marsicano abuse the dog on numerous occasions.
Christina Daly/Herald 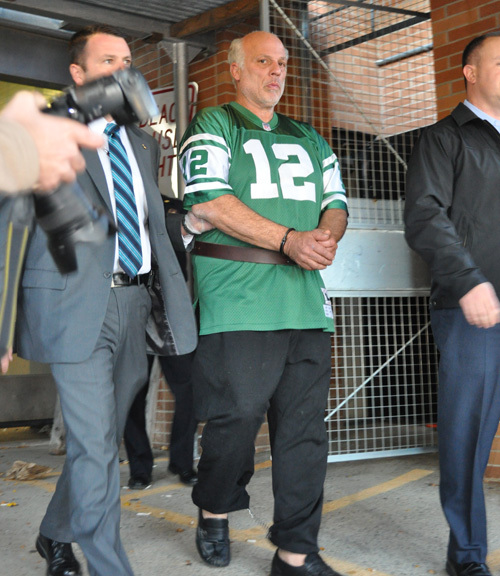 Mitchell Marsicano was led out of Long Beach City Court on Friday after his arraignment. He is charged with sexually abusing his dog.
Christina Daly/Herald
Previous Next
Anthony Rifilato

Mitchell Marsicano, 55, of 432 West Park Avenue, pleaded not guilty on Friday to charges that he sexually abused the 4-year-old male dog -- a white Shibu Inu named Snowball -- on at least two separate occasions.

Marsicano was charged with sexual misconduct, attempted sexual misconduct and burglary after he allegedly forced his way into his tenants’ apartment and engaged in sexual acts with the dog.

Nassau County District Attorney Kathleen Rice said that on at least two occasions between October 12 and October 21, Marsicano engaged in sexual misconduct with the dog in the upstairs apartment of the house he owned. Marsicano, who lived in the basement of his home and rented out other floors to two tenants, had previously turned over the care of the dog to his tenants, who claim that he had neglected and abused the animal.

Rice said the tenants contacted the D.A.’s Animal Cruelty Unit after witnessing Marsicano sexually abuse the dog in their apartment on Oct. 21 at approximately 2 a.m. after he entered the apartment without their permission.

One of the tenants, Daniel Miller, said he awoke to the dog's “squealing” and witnessed the disturbing scene in an empty adjacent bedroom.

Rice said the 23-lb. dog was removed from the home and underwent a veterinary exam at the Nassau Animal Emergency Group in Westbury. In a statement, Rice said that the veterinarian stated that the dog showed injuries to its legs, consistent with being roughly restrained; other injuries and conditions consistent with trauma; and was uncharacteristically skittish to being touched on its hindquarters.