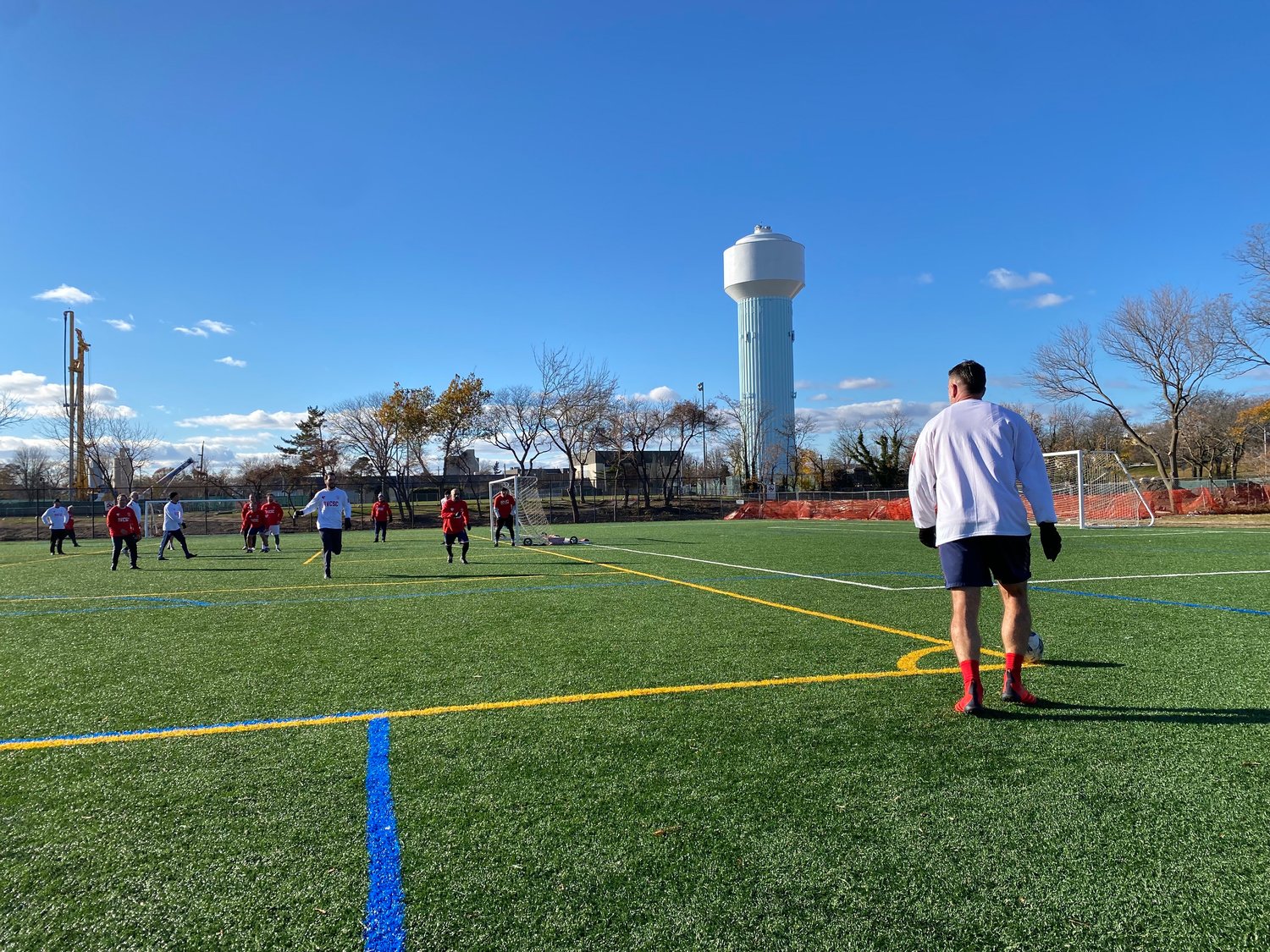 The Rockville centre Soccer Club men’s alumni game was held on the new turf at Tighe Field in the shadow of the water tower at Lister Field. The rededication was held in honor of the late Stephen Tighe.
Tom Carrozza/Herald 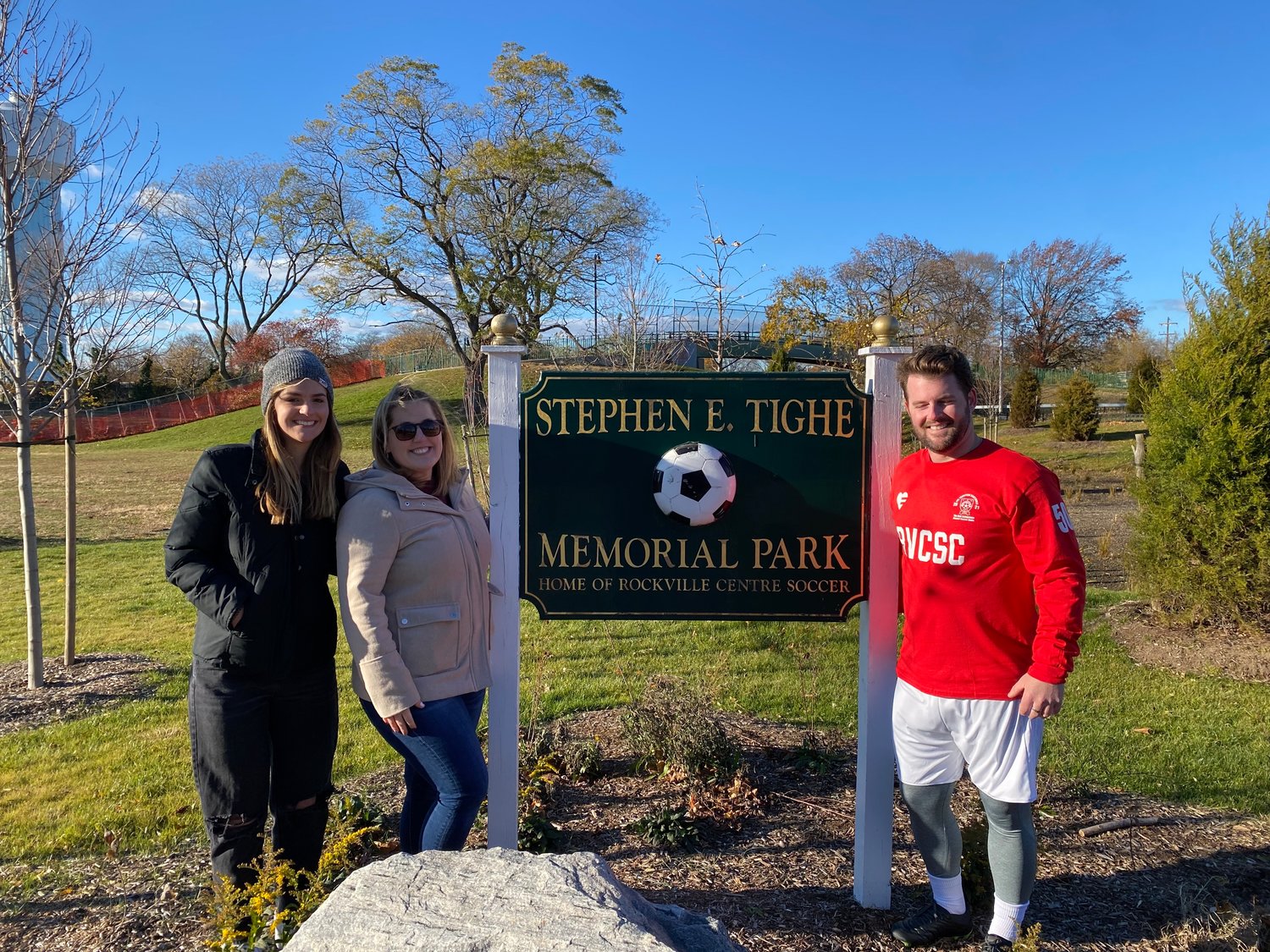 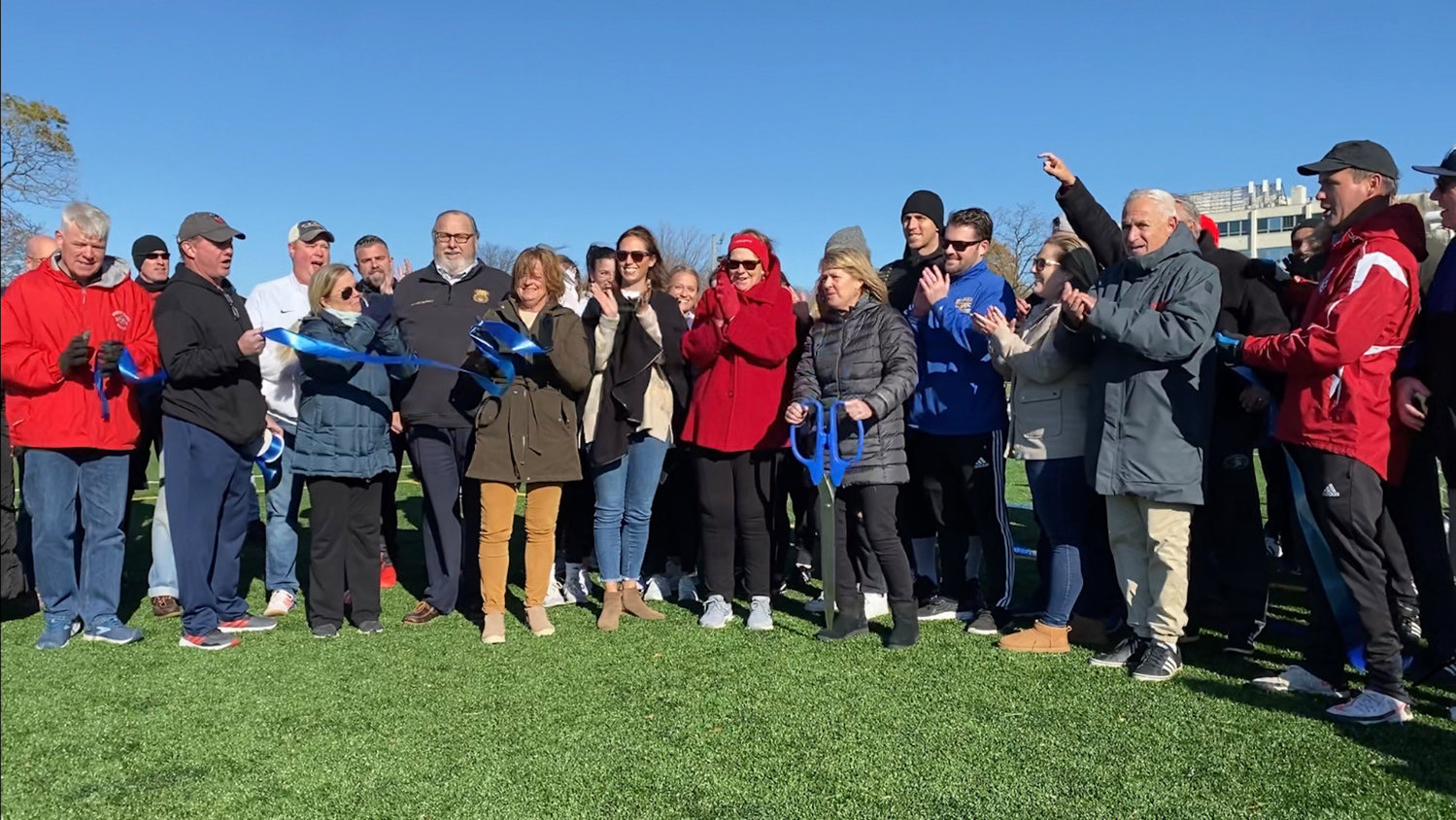 Kathleen Tighe, center right, with scissors, cut the ribbon on the new Tighe Field. Her late husband, Stephen, touched the lives of many soccer players in Rockville Centre.
Tom Carrozza/Herald
Previous Next
By Tom Carrozza tcarrozza@liherald.com

The Rockville Centre Soccer Club and village officials celebrated the completion of a goal close to a decade in the making last Saturday afternoon as they rededicated the recently renovated Tighe Field in honor of Stephen Tighe, a longtime club coach who died in the terrorist attacks of Sept. 11, 2001.

On a windy morning, village and state officials, the Tighe family and players, coaches, and administrators of the RVCSC met to honor one of the club’s most beloved coaches. Tighe was known to many for his positive influence on his players, family and friends.

“When I would come here as a kid to watch Dad coach, it was definitely not in its glory as it is now,” his daughter Elizabeth Tighe said of the field, which was previously known as Mill River Field. “I know he would be very honored and proud of what it has come to today.”

The field, on Windsor Avenue, just off Sunrise Highway, was renamed in Tighe’s honor in 2003, and the RVCSC emblem now contains his initials along with those of three other coaches who died that day, Jim Cove, Jimmy Geyer and Ed Geraghty.

The field was neglected for years, despite attempts by local elected officials and the club to revamp it. Last year, however, a $1 million grant from the state Dormitory Authority brought about improvements including improved drainage, a stone wall for parents to sit on, fencing behind the Mill River sideline and, most notably, artificial turf.

Patrick Tighe said that his father could often be found seeding and lining the field, making it a place where he could spread his love for the game to new generations. On Saturday, many of those he coached, now grown up and with families of their own, came back to don cleats once again and honor him in the alumni games.

“It just shows how well knit and loving the community is,” his daughter Lindsay Tighe said.

Elizabeth said her father was a patient coach. “He very rarely had a short fuse,” she recalled. “His harshest words were, ‘It’s unlucky.’ He wouldn’t ever put a kid down. Anytime they did something on the field that was meaningful to them, he would scream, ‘It’s magic!’”

Jim Graham, who coached alongside Tighe, called his good friend “Mr. Soccer.” “Steve had an innate way about him to make everybody feel they were part of the team,” Graham said.

Tighe was so dedicated to the game and his players that he considered quitting his job at Cantor Fitzgerald when he took on another team, the junior varsity squad at Kellenberg Memorial High School, in August 2001. He left his job at the World Trade Center at 3 p.m. every day to make sure he got back to the village to do what really made him happy: coaching soccer.

Last Saturday, the same day the soccer club celebrated its 50th anniversary with a gala event at the St. Agnes Parish Center, it also honored Tighe, who helped it get where it is today.

Cam Livingstone, the RVCSC’s treasurer, reflected on the rededication of the field to a man he played with and learned about coaching from. Livingstone coached the RVC Revolution, a name passed down from one of Tighe’s teams, for years.

“It’s very emotional for me,” he said. “He was a tremendous coach, and dedicated a lot of time to the players of this community, so it’s really nice for the current players to come here and play on this field with his name. We as coaches always make a point to make it known to them who he was, what he did for this community and why we’re playing here — and why the field is dedicated in his name.”