Valley Stream Troop 116 honors not one, but five Eagle Scouts 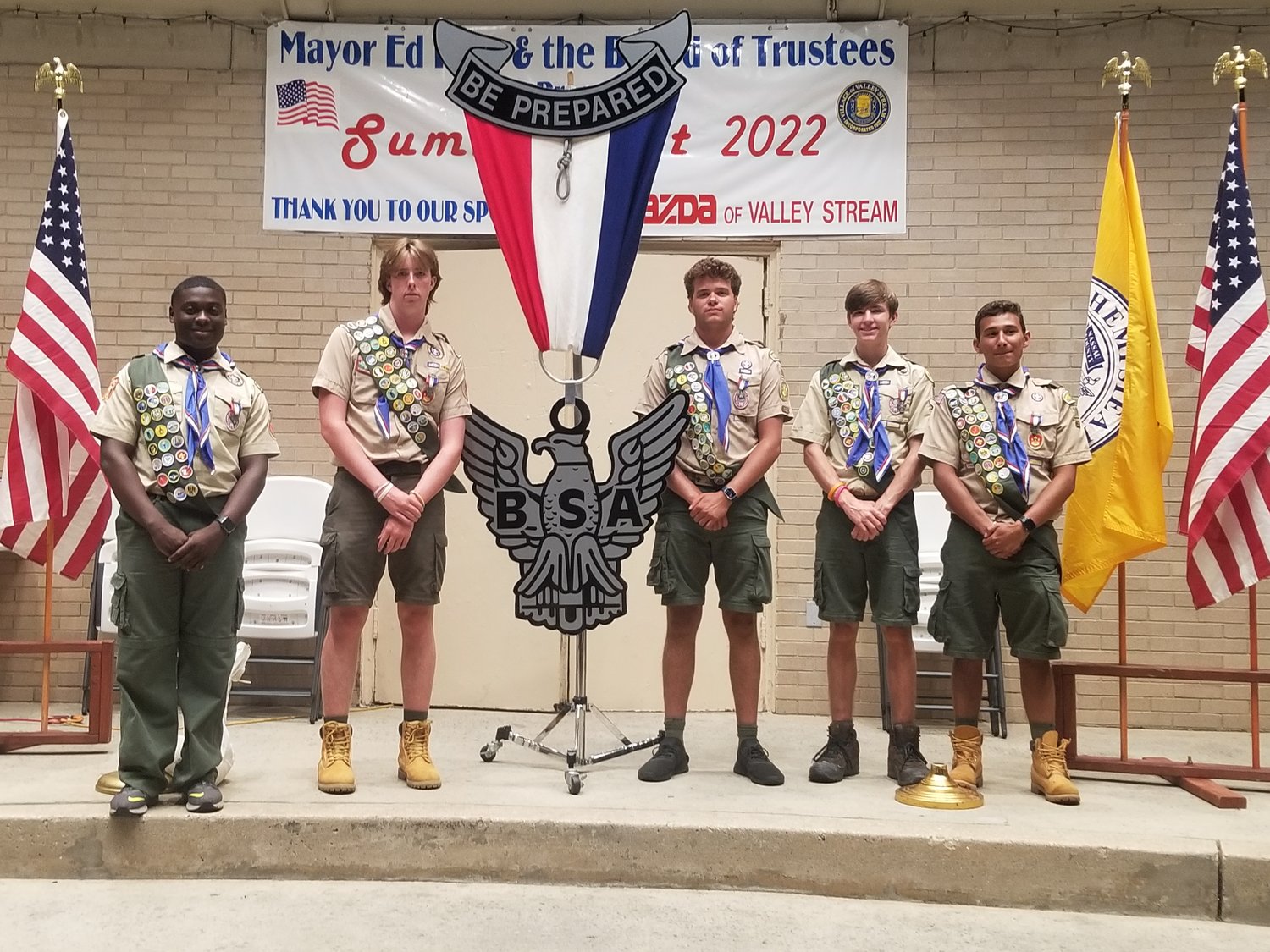 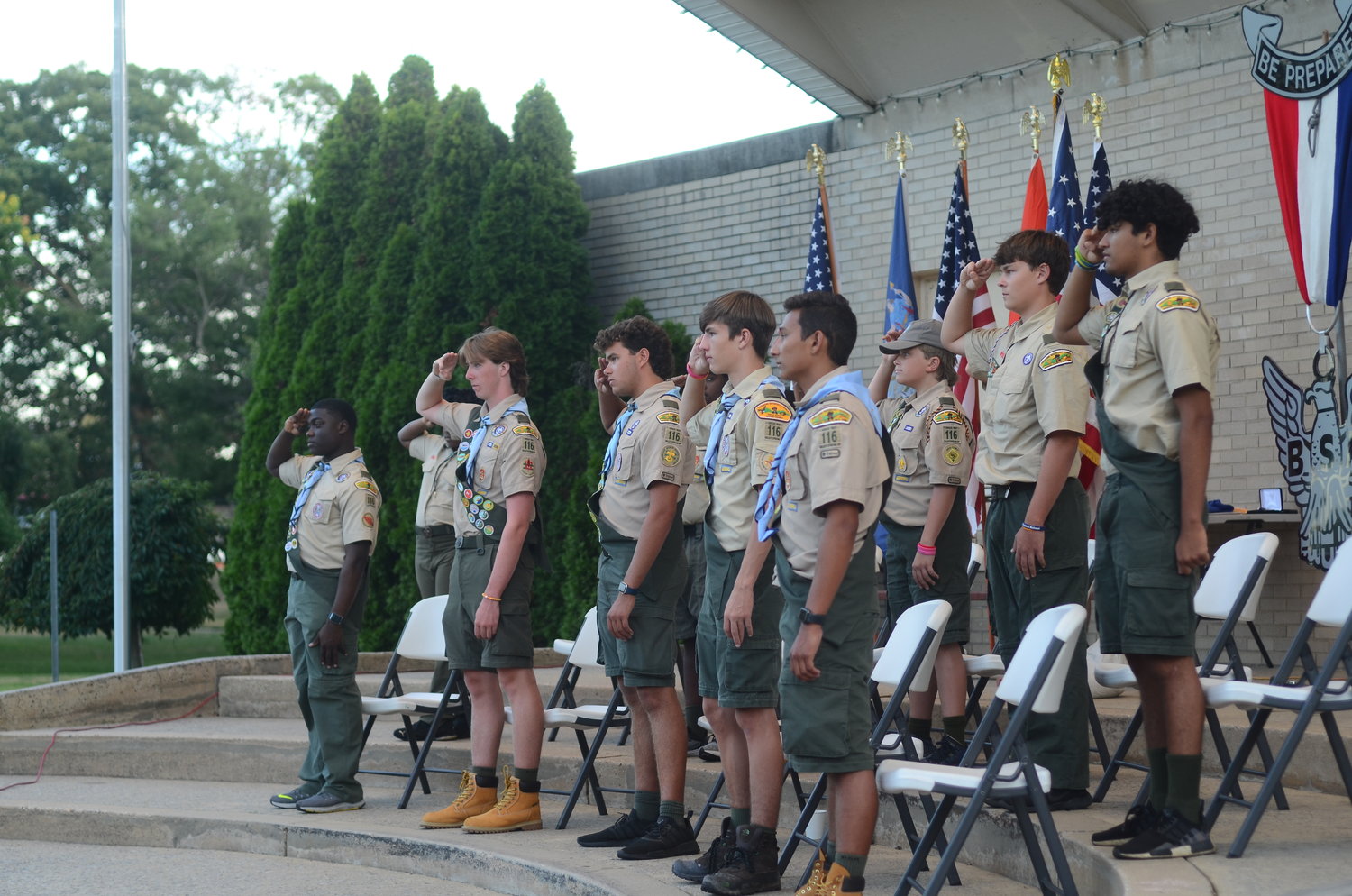 Eagle Scouts Jaden Gabb, Colin McAleer, Drew Mihalick, Daniel Osborn and John Valencia were recognized at an Eagle Court of Honor at the Village Bandshell last Friday in front of a crowd of family members and current and former scouts.
Juan Lasso/Herald
Previous Next
By Juan Lasso

The Eagle Scout rank is as high as you can get within the Boys Scouts of America. Its list of honored recipients includes household names such as Neil Armstrong and Gerald Ford.

Yet, only a few Scouts — roughly 8 percent — ever attain Eagle.

Dozens of well-wishers — including family members, fellow Eagle Scouts, former Troop 116 members, and village and local dignitaries — gathered around the Village Bandshell stage to watch the Scouts get conferred the rank of Eagle.

Among the litany of awards and proclamations, the Scouts were pinned with the Eagle Scout medal and a new neckerchief with the emblazoned eagle, representing the best efforts and values of the Boy Scouts organization.

Of the many intense requirements needed to earn the Eagle Scout rank is a minimum of 21 merit badges and completion of a community service project. And it’s not easy — the project typically requires multiple phases, intended to test the leadership mettle and planning skills of aspiring Eagles, while leaving some lasting benefit to the community.

Jaden Gabb, as a tribute to the Rockaways community he grew up in, decided to refurbish and beautify a fenced-in area of coastline at 592 Beach 43rd Street in Far Rockaway. It’s an area one local newspaper described as an “eyesore” and “whose only visitors were fishermen.”

Once Gabb got the green light from New York City’s parks department, he and his crew of volunteers got to work installing picnic tables, painting picnic benches, planting greenery, and even placing fishing rod holders along the shoreline. It gave the area by the bay a 360-degree makeover into a fully furnished community park.

Through his outreach efforts and social media campaign, Gabb managed to raise $3,000, plus another $2,000 in equipment and supplies.

For his service project, Colin McAleer sought to do a community build much closer to home. He offered a solution to any parkgoer befuddled as to how to make their way around Valley Stream’s Arthur J. Hendrickson Park by creating three informational site maps posted around the park.

The maps — printed on acrylic and placed in wood cemented into the ground — highlight the locations of Hendrickson’s key attractions, such as the restrooms, fitness stations, and the village pool complex.

Drew Mihalick also focused on Hendrickson Park, outfitting the green space with 20 new and improved workout stations, offering an open-air, socially distant space for people to exercise in nature amid the shut-in, self-isolating days of the coronavirus pandemic.

“I was riding my bike through Hendrickson Park looking for a possible Eagle project when I saw the fitness stations worn down and broken by usage,” Mihalick said. “Most fitness stations had to be torn down and built up from scratch. It took many months of planning and building, but I had tons of help from fellow Scouts, leaders, friends and family members.”

Inspired by the memory of his grandfather, William — a veteran affectionately called “Ozzy” — Daniel Osborn organized a clothing drive to help those who served their country through the advocacy organization United Veterans Beacon House. Osborn and his team collected 2,000 pounds worth of clothes for the non-profit.

Finally, John Valencia remodeled the front iron gates at the Maple Grove Cemetery in Kew Gardens, where several of his family members are interred.

While visiting the cemetery once, he decided to strike up a conversation with the manager — “a good dude named Phil,” according to Valencia.

“We exchanged information, and before I knew it, he had a job for me: to paint the fence,” Valencia said. “It was a great job at the end.”

“From a hail storm on a recent camping trip to a global pandemic, each of these Eagles has faced challenges that may have discouraged them, and could have made them walk away from scouting or not earn the Eagle rank,” Mihalick said. “But through encouragement, coaching and relying on the Scout oath and law, they never gave up, and achieved something incredibly rewarding.”

Have an opinion about the five Eagle Scouts? Send an email to jlasso@liherald.com.